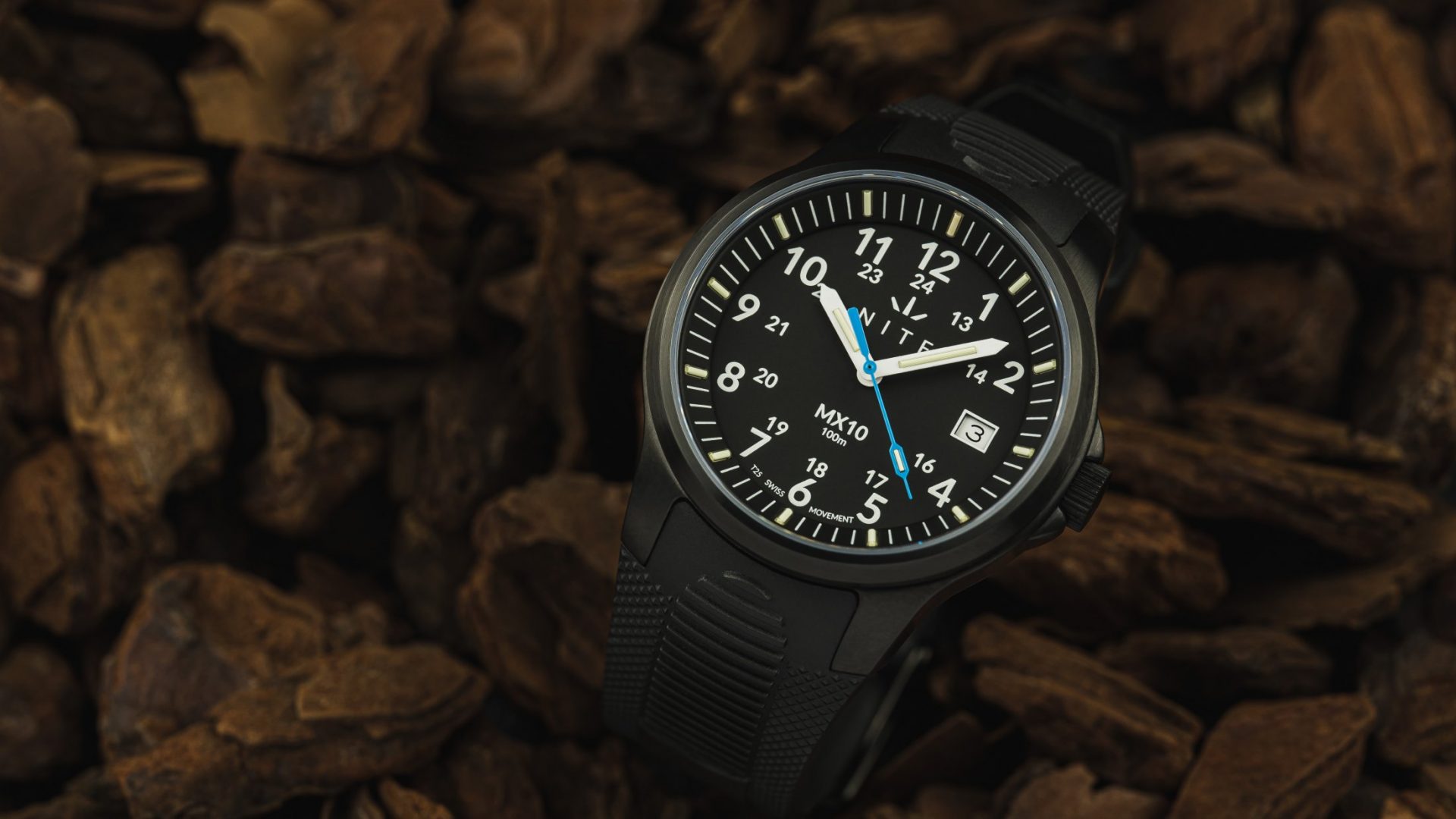 The Best 5 Field Watches To Take Outdoors – Including The Watch Worn By The SAS!

If there’s one thing a watch collector needs, it’s a decent beater watch. Something that they can wear outdoors when hiking, or just doing manual labour. The obvious choice for such a watch is a classic field watch, after all, that’s exactly what they were designed for. So, I thought I’d put together a list of some of my favourite field watches currently on the market.

Most field watches were originally made for military use, so they all tend to share a common design style that’s both durable and highly legible. Most are time-only watches, and they often have Arabic numerals for the hour markers. So, to keep things simple, I’ve stuck to watches that fit into this general definition of what a field watch is.

The other thing I want to say is that this list is obviously far from exhaustive. There are plenty of other great field watches out there that I haven’t added to this list, and these are just my picks from the watches I’ve handled myself. So feel free to disagree with me or suggest your own choices, and I might include them in a follow-up article.

Anyway, that’s enough preamble, so in no particular order here are my 5 picks…

My first choice is the Hamilton Khaki Aviation Pilot Pioneer Mechanical. Now, the first thing you’re probably wondering is why I didn’t choose the more popular Khaki Field Mechanical. Well, having reviewed both watches, I actually prefer the Pilot Pioneer to the KFM. There are two reasons for this. The first is that the Pilot Pioneer has 100m of water resistance, which is twice that of the KFM, and which makes the Pilot Pioneer more suitable for use in the field.

The second reason is that I think the design has more charm than the KFM, whilst still being practical. The Pilot Pioneer is a virtually identical reissue of the Hamilton W10, which has supplied to the British Military in the 1970s. With its textured dial, boxed crystal and 36mm cushion case, the Pilot Pioneer looks every inch the vintage field watch. The only downside is the fact that the watch has a mineral crystal, which is noticeably less scratch resistant than a sapphire one. But, other than that, it’s a well-specced watch.

Ticking away inside the Pilot Pioneer Mechanical is Hamilton’s H-50 manually wound movement. It’s based on the ETA 2801-2, and it has 17 jewels, a 3Hz beat rate and an impressive 80-hour power reserve. The watch retails for £740, which is pretty steep for the specifications. But a watch is more than the specs, and the design and finishing make this a very compelling offering indeed.

You can read my full review of the Hamilton Khaki Aviation Pilot Pioneer Mechanical here.

The next watch is from CWC, or the Cabot Watch Company, to use its full name, which was founded in 1972 by the former managing director of Hamilton UK, Ray Mellor. Since then the company has specialised in producing watches for all three branches of the Britsh Military, something it still does in a limited capacity to this day. As a result, the brand has many options to choose from when it comes to a reliable field watch.

The classic choice is the G10, which was last issued to British forces in 2008. It’s got a purely utilitarian design, with a 36.5mm case that’s got an anti-reflective satin finish. Like many issued watches, the G10 has fixed spring bars, which means it can only be fitted with one-piece straps. However, it also stops the watch from being lost due to a spring bar failure.

Powering the G10 is an ETA quartz movement that’s the perfect choice for the humble field watch. Other notable features include lumed hands and markers, a 50m depth rating, and an acrylic crystal. Though acrylic isn’t terribly scratch-resistant, it is hard to shatter, which is why it’s still used on the G10. All in all the CWC G10 isn’t the most flashy field watch, but it’s an excellent blend of functionality and heritage that makes it a great choice of tool watch. It also costs just £279, which makes it the cheapest watch on this list.

You can purchase the G10 from CWC’s website here.

The third watch I’ve chosen is an old favourite of mine and that’s the Christopher Ward C65 Sandhurst. It’s based on the iconic Smiths W10 but updates the design with some of Christopher Ward’s signature elements.

The watch is the most expensive on this list, with a retail price of £1,050 on the steel bracelet, but it makes up for that with its exceptional build quality. The Sandhurst is also the dressiest of the watches on this list, and it’s perfectly suited to being a “go anywhere, do anything” watch.

Whilst it may look refined, the Sandhurst is equally suited to the rugged outdoors, with a sapphire crystal, 150m depth rating, and bright Super-LumiNova. It also has a chronometer-grade Sellita SW200 movement, so it’s guaranteed to be the most accurate of the mechanical watches on this list. To cap it all off, the Sandhurst is officially approved by the Ministry of Defence and bears the heraldic badge of the British Army on its case back. Though it might not have the heritage of some of my other picks, the Sandhurst makes up for that with its finishing and value for money.

You can read my full review of the Christopher Ward C65 Sandhurst here.

Following on from the Sandhurst, the next watch on the list is another that’s based on the Smiths W10. It’s the Smiths PRS-29A from Timefactors, and it’s a near-exact reissue of the original W10. It’s slightly bigger than the original, with a 36mm steel case that’s only 11.1mm thick and has drilled lugs rather than fixed spring bars.

However, the PRS-29A makes the cut not because of its looks, but because of its specifications. The watch is water resistant to 100m, can resist magnetic fields of up to 20,000 A/m (amperes per metre), and has a boxed sapphire crystal that has a healthy application of anti-reflective coating on its underside. The lume is also ridiculously bright and is among the best I’ve seen at this price point. The last thing to talk about is the movement, which is a Sellita SW210. This hand-wound calibre has 19 jewels, a 42-hour power reserve, and a 4Hz beat rate.

The Smiths PRS-29A costs just £405, which makes the watch outstanding value for money. The only fly in the ointment is the ordering system, as the store only opens on Sunday afternoons every couple of weeks, and demand is usually so high that the store closes within a few minutes. But, if you can get your hands on a PRS-29A, it’s well worth the effort.

You can purchase the Smiths PRS-29A from Timefactor’s website here.

I’ve saved the best till last with my final pick. It’s the MX10 from Nite, and it offers everything you need in a modern field watch for a very reasonable price of £300.

The watch has a sapphire crystal with several layers of anti-reflective coating, along with 100m of water resistance. The movement is the Ronda 715, a 5-jewel Swiss quartz movement that has a 5-year battery life. The cherry on the cake though is that instead of the Super-LumiNova you usually see on field watches at this price point, the MX-10 uses tritium tubes. Tritium is a radioluminescent material that emits a steady constant glow, which makes it perfect for nighttime legibility.

As if the MX10 wasn’t impressive enough though, back in 2005 Nite supplied 400 of them to none other than the SAS. That’s right, of all the possible choices this elite regiment could have chosen, they chose the MX10 as their issued wristwatch. Which means that these understated field watches have probably seen use in some of the harshest combat environments of the past 20 years. And, if the MX10 is good enough for the SAS, then it’s probably good enough for you too.

You can purchase the MX10 from Nite’s website here.