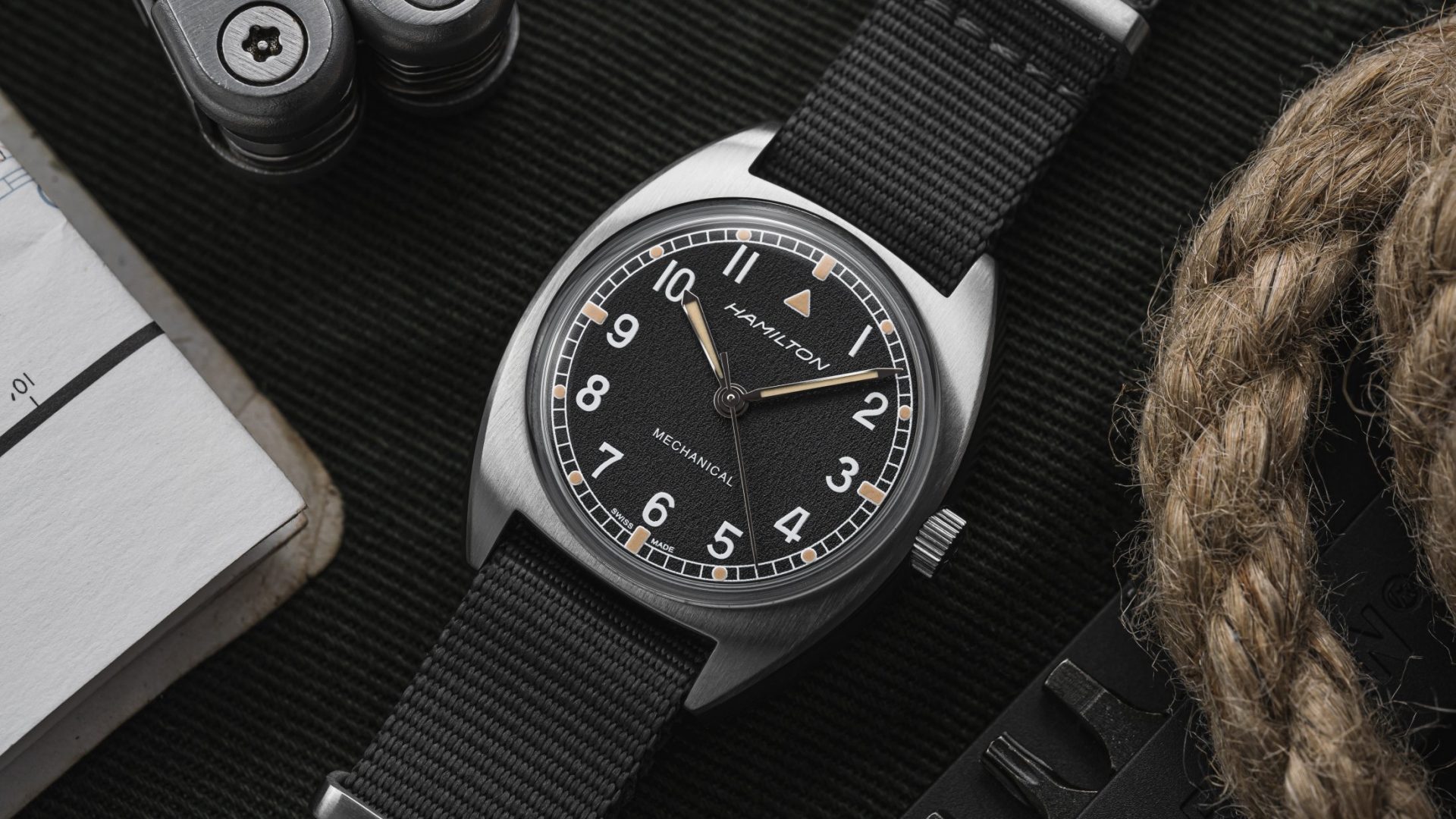 A little while ago I reviewed what is probably the most popular field watch on the market, the Hamilton Khaki Field Mechanical. Whilst it’s a great watch in many ways, it didn’t quite hit the spot for me, and that’s because, to be honest, I found it a bit dull. I know that’s kind of the point of a field watch, but I’m no soldier stuck in the Vietnamese jungle. I’m a watch geek who wants a field watch because I like its aesthetics. And that’s why when I had the KFM, I was left wanting a field watch that was just a little bit nicer. Fortunately for me, Hamilton makes another field watch that I think is just what I’m after. That watch is their Khaki Aviation Pilot Pioneer Mechanical.

It’s essentially a reissue of the Hamilton W10, which the company supplied to all three branches of the British military from 1973-1976. It also makes the name Pilot Pioneer something of a misnomer, as the design is for a general service watch, rather than one specifically designed for pilots.

Why The Pilot Pioneer Costs So Much

In the past, I’ve been highly critical of the Pilot Pioneer’s retail price of £720, mainly because it’s almost twice the price of the Khaki Field Mechanical. That watch has very similar specs and styling, but it costs only £395. However, recently I’ve begun to wonder if the difference in the prices of these two models isn’t simply because the Pilot Pioneer costs that much more for Hamilton to make. Practically every aspect of it is finished to a higher standard, and I wouldn’t be surprised if that meant its production costs were almost double that of the KFM. And, if Hamilton applies the same percentage markup to both watches, then that would result in the large difference in the retail prices.

So, let’s take a look at exactly why I think the Pilot Pioneer is so much nicer than the Khaki Field Mechanical…

Let’s start by looking at the case. Just like the original W10, the Pilot Pioneer has a tonneau/cushion-shaped case with a brushed finish. The brushing keeps the watch looking toolish, but it also looks more refined than the bead blasting seen on the Khaki Field Mechanical.

The size of the case is a modest 36mm, with a lug-to-lug of 41mm, and a thickness of 10mm. This is pretty much the same size as the original Hamilton W10, and I’m glad to see Hamilton resisted the urge to upscale the watch for a modern audience. I find that the watch wears pretty true to these dimensions as well, so it will undoubtedly be too small for some people.

To add to the authenticity of the Pilot Pioneer, Hamilton opted to fit it with a boxed mineral crystal that mimics the shape of the acrylic crystals found on the original W10. It sits nice and proud from the case, which helps the watch to really nail the vintage look. However, I’m confused as to why Hamilton didn’t go with a sapphire crystal. Sapphire would be much more scratch-resistant, and the fact that the Pilot Pioneer only uses a mineral crystal is frankly inexcusable. Though the one thing the mineral crystal on the Pilot Pioneer does have going for it over the sapphire on the KFM, is that it has a double anti-reflective coating. This severely reduces any glare, and therefore I had no trouble at all in telling the time in bright sunlight.

The Pilot Pioneer also has 100m water resistance, double that of the KFM. It’s a small improvement, but it means that I feel a lot more comfortable taking the Pilot Pioneer for a swim than I do the Khaki Field.

As you’d expect from a military reissue, the Pilot Pioneer comes on an 18mm grey NATO strap. It’s a good quality NATO that’s certainly far better than the cheap ones you can buy off eBay. The only downside is that the tip and pin holes have a leather cover that makes the strap too thick to tuck back on itself.

The Pilot Pioneer Has A Gorgeous Dial

Then there’s the print. The markings are very similar to those found on the original W10, with a railroad minute track, Arabic numerals from one to eleven, and an arrow at the twelve o’clock position. Hamilton even used their period correct logo with an italicised font. All this is pretty standard for a field watch, but it’s set off by the use of faux-aged lume on the minute track and handset. Fauxtina is very much a love it or hate it feature, but personally, I think it sets the dial off nicely and gives the watch a much-needed pop of colour. However, I have to say that whilst the creamy lume does help give the watch a vintage aesthetic, it isn’t all that bright.

Lastly, the simple sword handset is polished with a rounded surface. This small detail means that they catch the light slightly differently depending on the angle, and look that bit more interesting over a flat handset.

Overall the dial of the Pilot Pioneer remains as easy to read as you’d want a field watch to be, but it throws in enough detail to make the well-trodden military design feel a bit more unique.

A Look At The Pilot Pioneer’s Movement

Just like the Khaki Field Mechanical, the Pilot Pioneer uses Hamilton’s H-50 movement. It’s essentially a modified ETA 2801-2, and it has 17 jewels, a 3Hz beat rate and an impressive 80-hour power reserve. The longer power reserve is obviously very welcome on a manual wind watch like this, and the H-50 seems to be a reliable update to the proven ETA calibre.

So, for me at least, the Pilot Pioneer knocks the socks off the Khaki Field Mechanical. It’s simply a much better finished watch, and as a result, it really feels like a step up from the KFM. Of course, if you prefer the more functional look of the KFM, then that’s fine. I’m not trying to tell you your wong to like that watch more. After all, it essentially offers you the same features for a lot less money. It’s just that as someone who’s owned both models, along with countless other field watches, I really like those small details on the Pilot Pioneer that set it apart from other military-inspired watches. The only letdown is that mineral crystal, and I don’t think I’ll ever figure out why Hamilton chose it over sapphire. But, it’s a small negative to what is otherwise a charming and well-executed reissue of a classic military field watch.

With the level of finishing that the Pilot Pioneer has, I understand why Hamilton has priced this watch at £720. But despite all the improvements over the KFM, I still can’t help but feel that it’s on the expensive side for the overall package it delivers. Which is why, if you do want to get one of these, I recommend that you do what I did and buy it second-hand for 35-40% off the RRP. At that price, I think it makes a lot more sense to spend that little bit more and get the Pilot Pioneer over the Khaki Field Mechanical.

You can purchase the Khaki Aviation Pilot Pioneer directly from Hamilton’s website here.