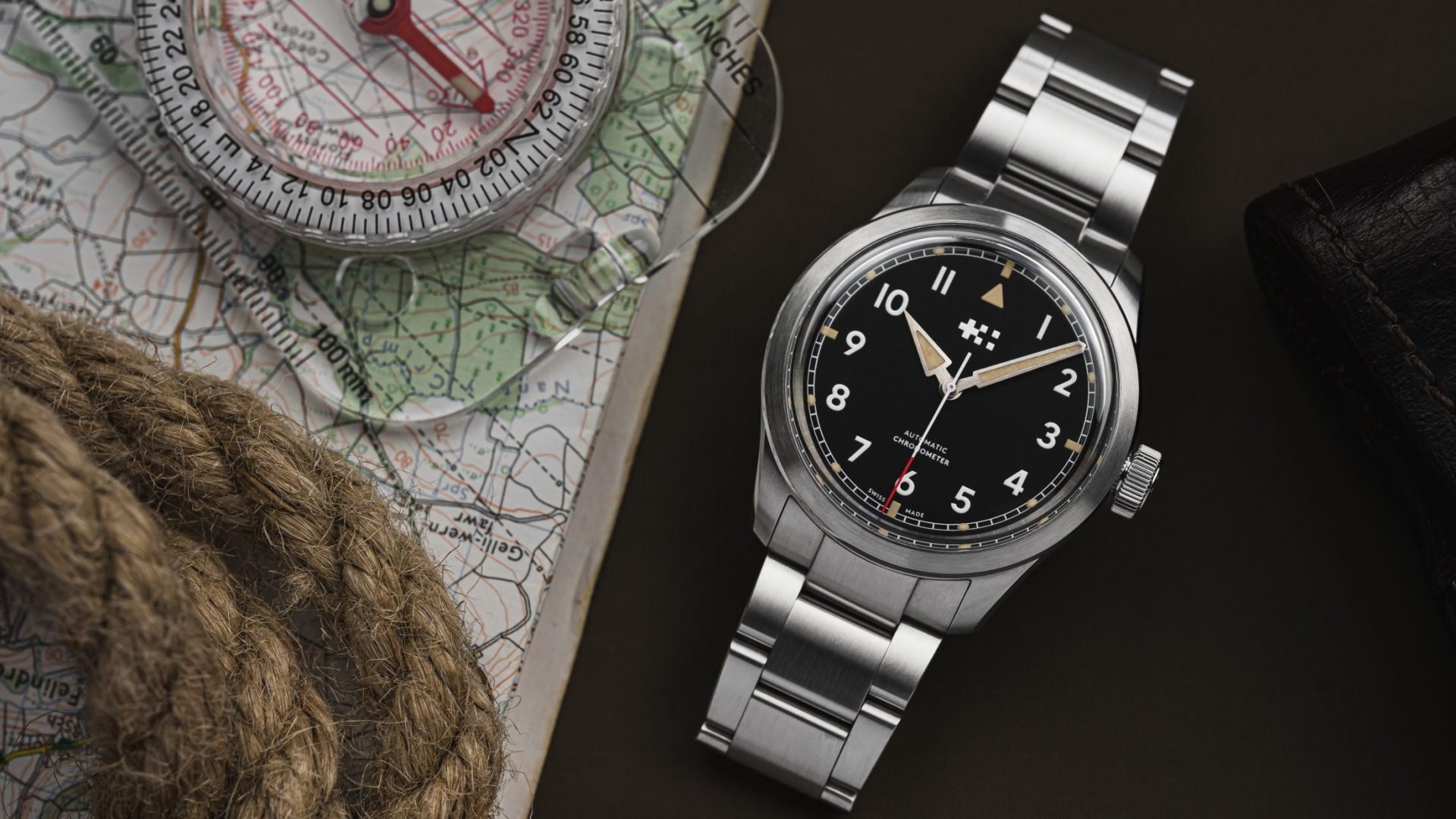 When it comes to field watches, the devil is in the details. The design language of these military-inspired pieces tends to be very rigid, which leaves little room for variation when it comes to designing your own.

Back in 2019, Christopher Ward launched their own field watch called the Sandhurst, as part of its military collection. Approved by the British Ministry of Defence, the C65 Sandhurst is of course named after the famous Royal Military Academy in Berkshire. It’s a loose interpretation of the iconic Smith’s W10, the field watch issued to the British Army between 1967 and 1970. The Smiths W10 is perhaps the most well-known of the British field watches, so it was the natural choice for Christopher Ward to take inspiration from. The Sandhurst has proved to be one of Christopher Ward’s most popular models, and now the company has refreshed the original design and launched the updated Sandhurst Series 2.

I’ll cut to the chase right now and say that this update is most definitely an improvement over the original Sandhurst, which itself was an excellent watch. But Christopher Ward has listened to feedback regarding the Series 1 and made a few small changes that take the watch to the next level. The changes themselves are quite varied and subtle, so rather than list them out I’ll cover each point as it arises.

The C65 Sandhurst Has A Killer Case And Bracelet

We’ll start with perhaps my favourite aspect of Christopher Ward watches, and that’s the case. The brand dubs the design the Light-catcher™ because of the way the combination of chamfers and brushed and polished surfaces play with the light. It’s a design I’m so fond of because it demonstrates just how high above its weight Christopher Ward punches. The finishing is simply superb, and the design strikes a perfect balance between form and function.

In addition to its good looks, the Sandhurst is also rather comfortable to wear. Part of that is down to the case dimensions, because with a 38mm diameter, a lug length of 43.7mm, and a thickness of 11.9mm, I think the Sandhurst sits in something of a sweet spot. It’s not so small as to be dainty, but also not so big that the simple design looks out of proportion. (Yes, I’m looking at you, Tudor Ranger.)

However, the biggest reason that the Sandhurst wears so well is its upgraded bracelet. Whilst the case is exactly the same as was used for the Series 1, Christopher Ward has made a couple of tweaks to the oyster bracelet. Namely, the bracelet now includes half-links, and the links themselves are secured by screw pins. Paired with the ratcheting micro-adjustment system built into the clasp, it’s never been easier to get the perfect fit on your wrist. Though, if I had to be really picky, I’d say that the clasp is possibly a little long, as it’s practically the same length as the watch, and might be a bit too big for some people. However, on a positive note, the bracelet also uses quick-release spring bars, which make changing the straps on the Sandhurst ridiculously simple.

A Twist On A Classic Design

As I said at the beginning, the Sandhurst is based on the classic Smiths W10, which means that its dial follows the instantly recognizable field watch layout. There’s an arrow at the 12 o’clock position, with Arabic numerals at the other hour markers, and a railroad minute track surrounding them. The font of the Arabic numerals has also been changed, and it’s now much closer to the font used on the Smiths W10. It’s a small thing, but it shows some nice attention to detail on Christopher Ward’s part.

I’m sure you’ll also have noticed that the dial no longer has the full “Christopher Ward” text printed beneath twelve o’clock, and instead has their twin flags logo. It’s a welcome change, as the twin flags are much more compact and balanced than the full-text logo ever was.

As I’ll get onto later, Christopher Ward has upgraded the lume on the C65 Sandhurst, and a side effect of the heavier application is that the numerals are now slightly raised, which stops the dial from looking too flat and dull. You’ll either love or hate the use of “Old Radium” lume on the minute track and handset, and there’s no right or wrong opinion on it. But, personally, I like the use of two different shades of lume, as it adds another dimension to an otherwise straightforward design.

Another obvious change is to the handset, which is now arrow-shaped and completely flat with a toolish brushed finish. On the one hand, I prefer these to the old baton handset which had bevelled polished sides. Those polished surfaces had a tendency to turn black under certain lighting and thus make the hands look very thin. There’s no danger of that with the new handset, and they’re always easy to read. However, on the other hand, I’m not completely sold on the shape. Of course, it’s purely a subjective opinion, but I can’t help but feel like the sharp angles of the hour hand don’t quite match the blunter, less aggressive shape of the minute hand. But, my own design tastes aside, I think that the dial of the Sandhurst is a great take on the classic field watch aesthetic.

The C65 Sandhurst Has Specifications Befitting A Military Watch

As befits a watch bearing the heraldic badge of the British Army on its underside, the C65 Sandhurst has all the specifications you need in a field watch. It features a screw-down crown and is water-resistant to 150m, as well as a boxed sapphire crystal. The use of a boxed crystal is a nice touch, as it mimics the old acrylic crystal on the Smiths W10 whilst offering improved scratch resistance.

Now, one of the biggest improvements that Christopher Ward made to the Series 2 Sandhurst over the Series 1 is the lume. The watch uses some of the newest grades of Super-LumiNova and as a result, the watch is markedly more legible in the dark than the original model.

The last aspect of the specifications to discuss is the movement. Ticking away inside the Sandhurst is a COSC-certified Sellita SW200-1. As a certified chronometer, the movement is guaranteed to be accurate to between -4 and +6 seconds a day, and that high level of accuracy is perfect for a military-inspired watch. Besides that, the SW200 is one of the main Swiss movements in use today, and most of us are familiar with its specifications. But, for those who aren’t, the movement has 26 jewels, a 36-hour power reserve, and a beat rate of 28,800 bph.

All in all, I think that the Sandhurst perfectly represents why Christopher Ward has been so successful in the watch industry. For a watch that costs £1,050 or $1,080 on a bracelet, you certainly get an awful lot for your money. The fit and finish are exceptional and are certainly among the very best I’ve seen at this price point. As to the C65 Sandhurst’s specifications, the watch has pretty much everything you need in a “go anywhere, do anything” watch, with solid water resistance, decent lume, a sapphire crystal, and of course that chronometer-certified movement.

Which just leaves the design as the deciding factor for whether or not this watch is for you. Of course, we all have different tastes, but personally, I think that Christopher Ward has done a good job with the design of the Sandhurst. Sure, it doesn’t really break the mould when it comes to field watch design, but I think that there are enough small details on the watch to stop it from being boring. And, because of that, I think that the C65 Sandhurst is a very versatile watch that can be dressed up or down to suit you.

If you like the look of the C65 Sandhurst Series 2, you can buy one from Christopher Ward’s website here.