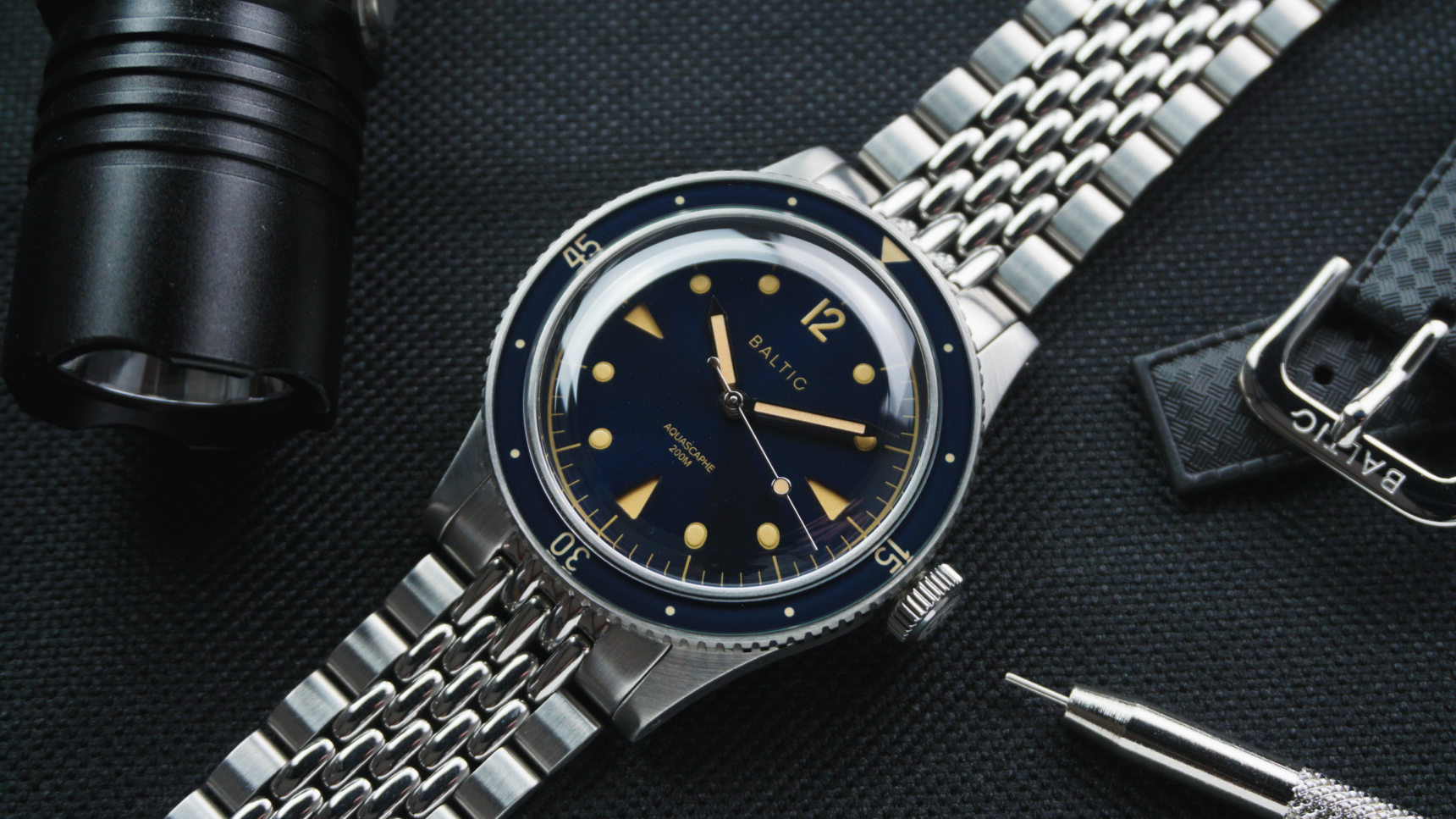 Have you ever wondered what a vintage watch would be like if it was built today? Well that pretty much sums up Baltic’s Aquascaphe.

As the name implies, it’s inspired by the Blancpain Bathyscaphe, with Baltic applying their own aesthetic twist to the classic vintage diver. Obviously vintage inspired watches are a dime a dozen, and to be honest the Aquascaphe isn’t cheap. It costs €695 or £630 on a rubber strap, and €790 or £717 on a bracelet. But there’s something about Baltic’s design language that I find pretty compelling. In fact their HMS 001 was one of the first watches I reviewed when I started my blog.

I reached out to Baltic and they were kind enough to send me a watch to review. Now I feel like I should point out that the first watch they sent me stopped after 3 days. But in fairness, I got a next day replacement, so I can’t complain at their service!

The case itself is 38mm, but the bezel adds an extra millimetre to the watch. At 39mm overall I think the case is the perfect size for a vintage inspired watch, and at 12mm thick it’s also pretty slim on the wrist. When it comes to the water resistance, you get a healthy 200m from the Aquascaphe’s case.

The case shape is fairly straightforward, and entirely brushed. Usually I prefer it if a case has a bit more detail to it, but I think that there’s enough going on with the rest of the watch that it complements the design well. The finish itself is very well done on the sides of the case, but to my eye the lug tops could be finished a bit better. The brushing on them looks and feels a bit coarse.

Now, if you flip the watch over, you’ll see the case back is decorated with the image of a frogman. This is a direct reference to the case backs of vintage skin divers, which would often feature the same motif. 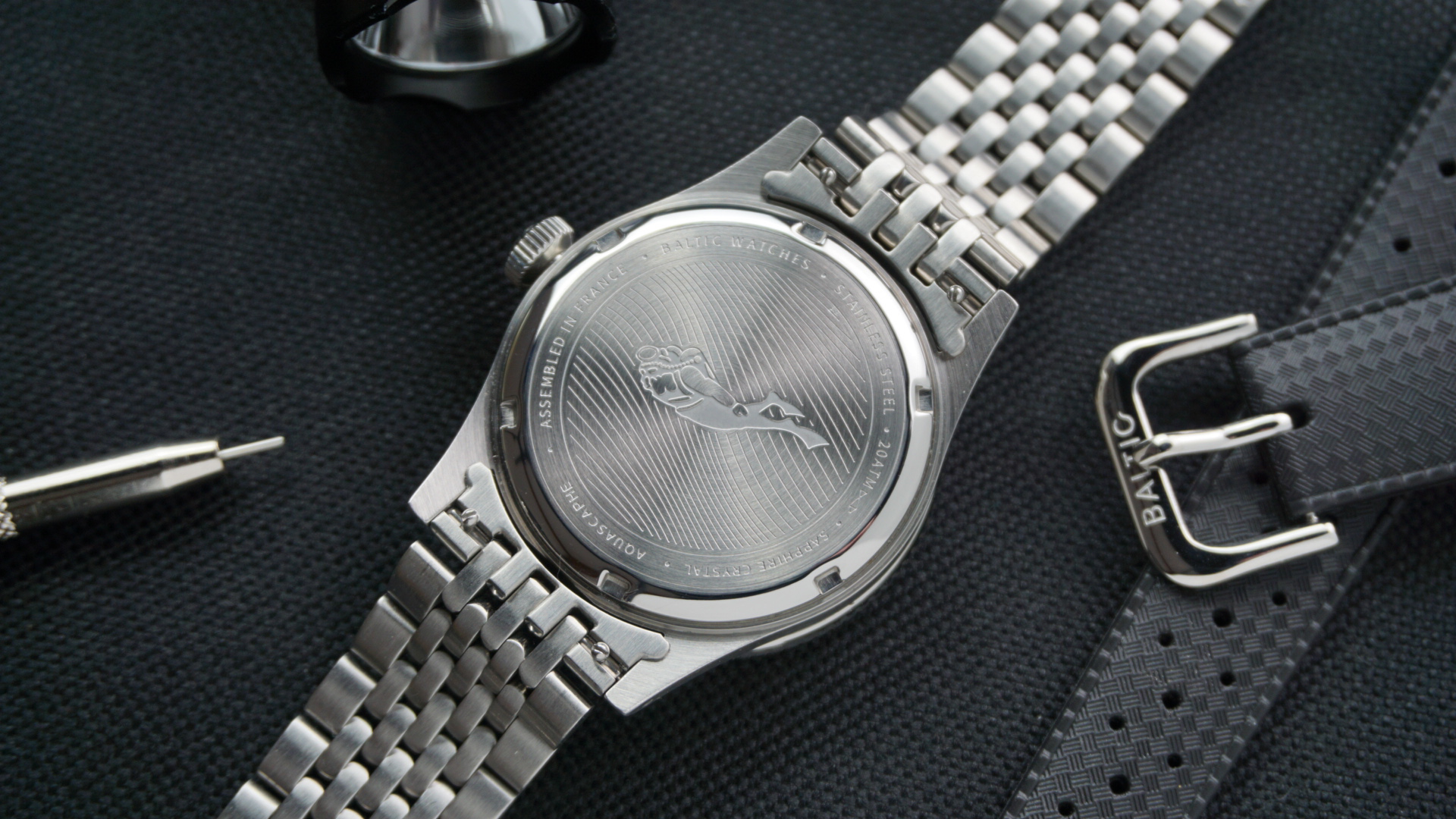 The screw-down crown is beautifully oversized, and as a result it’s very tactile and easy to grip. It’s simply signed with a B, but the polished letter is crisply set against a textured background and looks great. 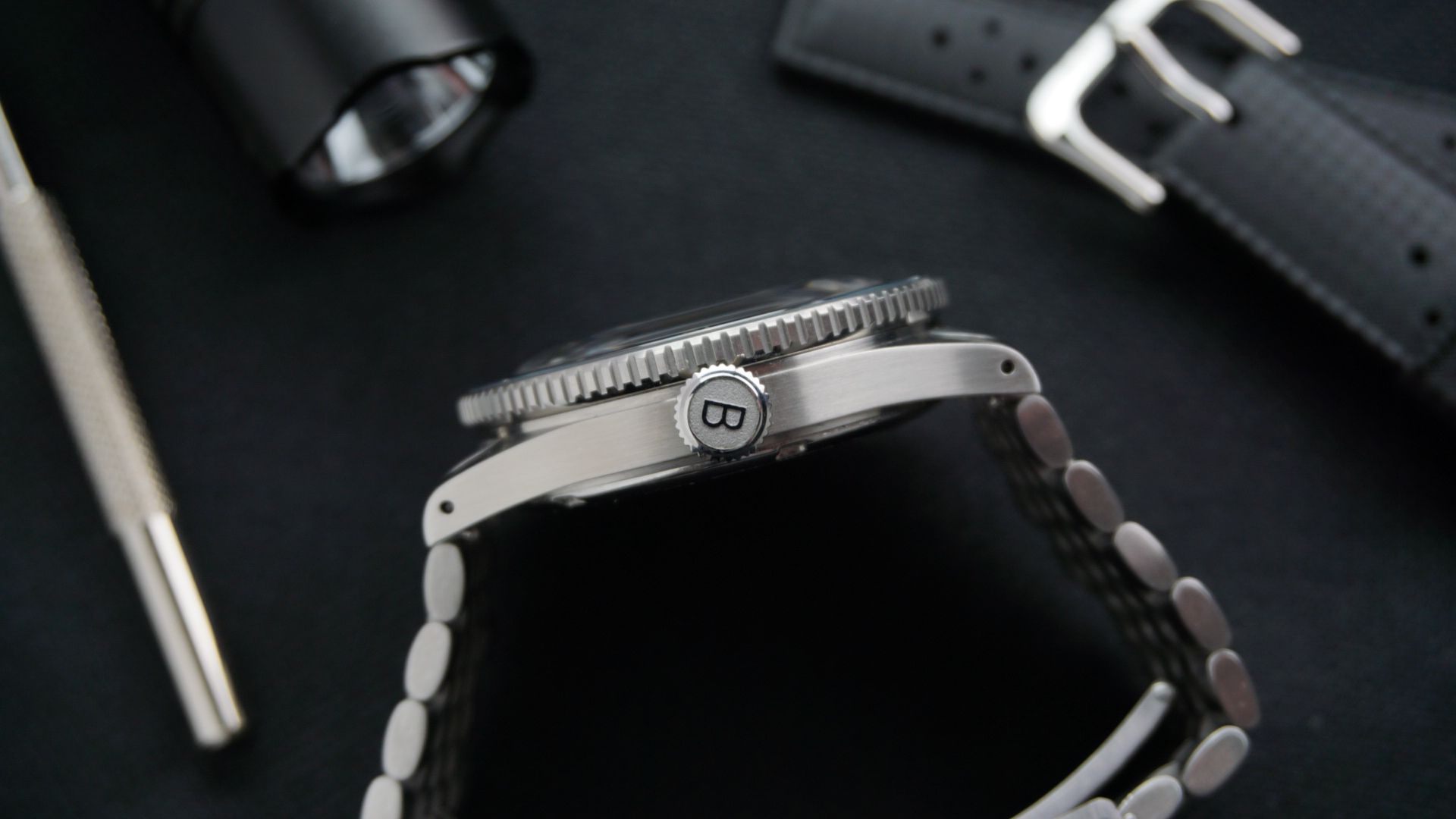 The bezel has 120 clicks and a sapphire insert that mimics the old Bakelite bezels sometimes used on old divers. Its action is really good. The bezel turns very smoothly and has very little play. The one thing that lets it down, is that the insert is very slightly misaligned with the dial.

Just like the bezel insert, the crystal is made from sapphire. It’s got a high dome that imitates the vintage acrylic crystals beautifully. The similarity between this and the vintage divers I’ve owned in the past is quite unbelievable. The problem is that it’s also quite reflective under bright light, and between you and me, the Aquascaphe is an absolute bitch to shoot. However, despite this, sapphire is by far my preferred choice for a watch crystal thanks to its incredible scratch resistance. 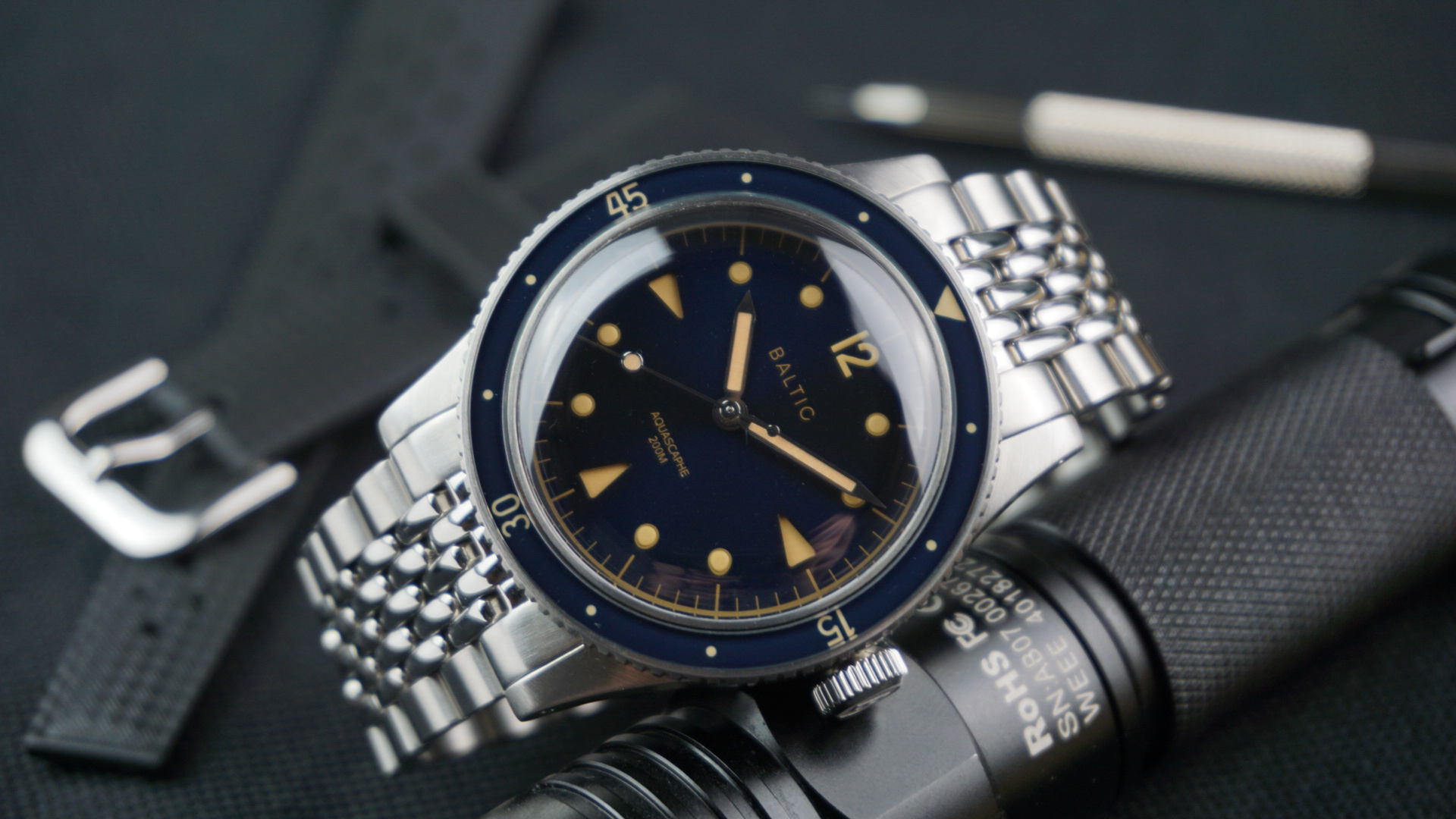 Now the dial itself is an incredibly deep sunburst blue. It goes from looking almost black in low light to a rich royal blue in the sun. Against this wonderful range of colour the printed guilt minute track and dial text stands out beautifully. Combine that with the deep ochre of the faux patina lume, and you’ve got something that perfectly captures the feel of a vintage diver.

All in all it’s a match made in heaven, and I have to hand it to Baltic for absolutely nailing the colour combo. 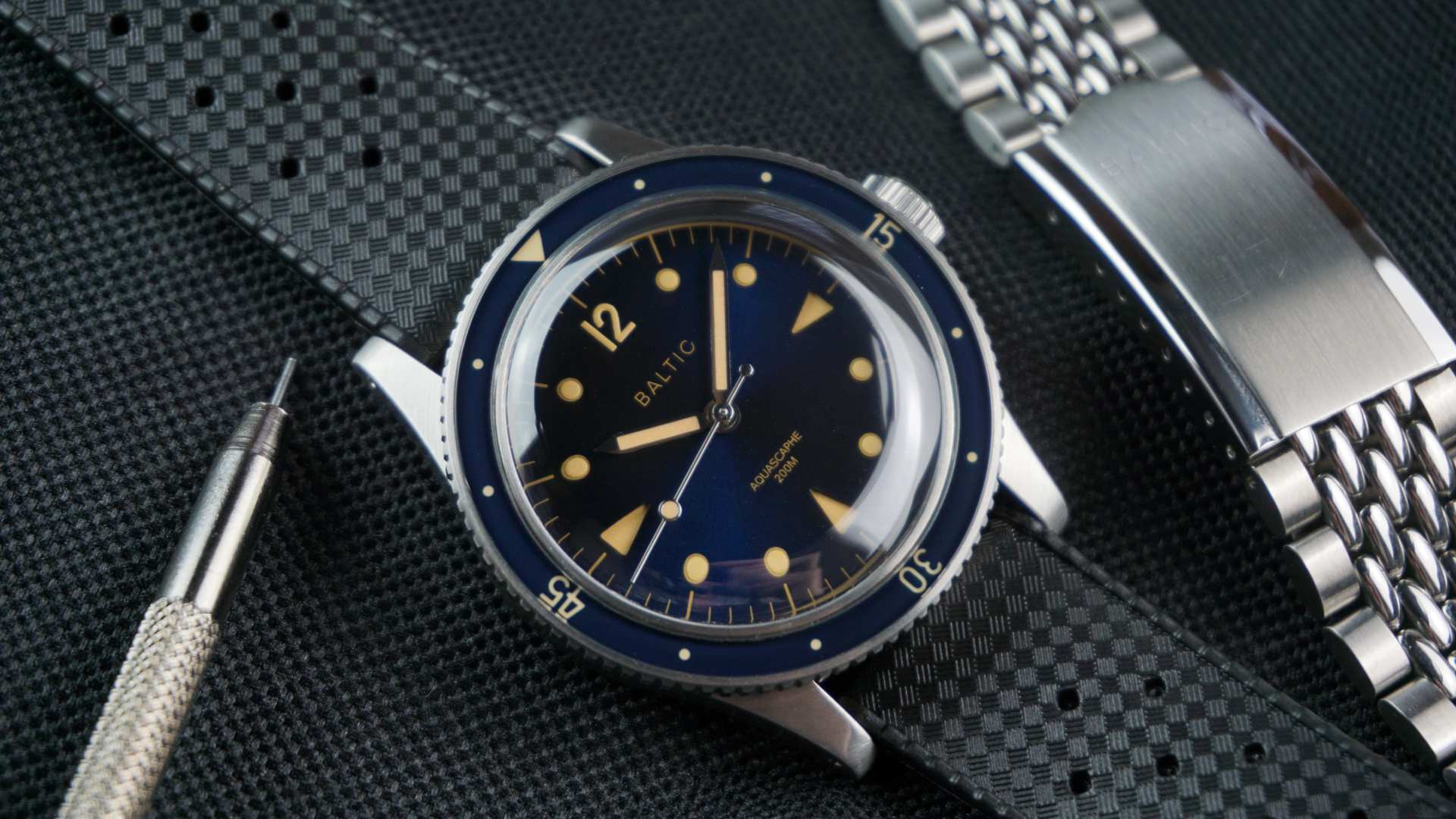 Colours aside, the design is obviously heavily inspired by the Blancpain Bathyscaphe. However, it’s not an exact copy, with Baltic slimming down the markers to give the design some modern refinement. They’ve also used a sandwich dial to recess the arrow markers at three, six and nine. This of course adds some depth to the watch, and adds some complexity to the otherwise straightforward aesthetic.

The polished pencil hands are again lifted straight from those 1960’s divers, and the finish is pretty good overall. The lollipop seconds hand is a nice touch too, and though the handset is fairly simple, they’re a classic choice that suit the refined look of the watch. 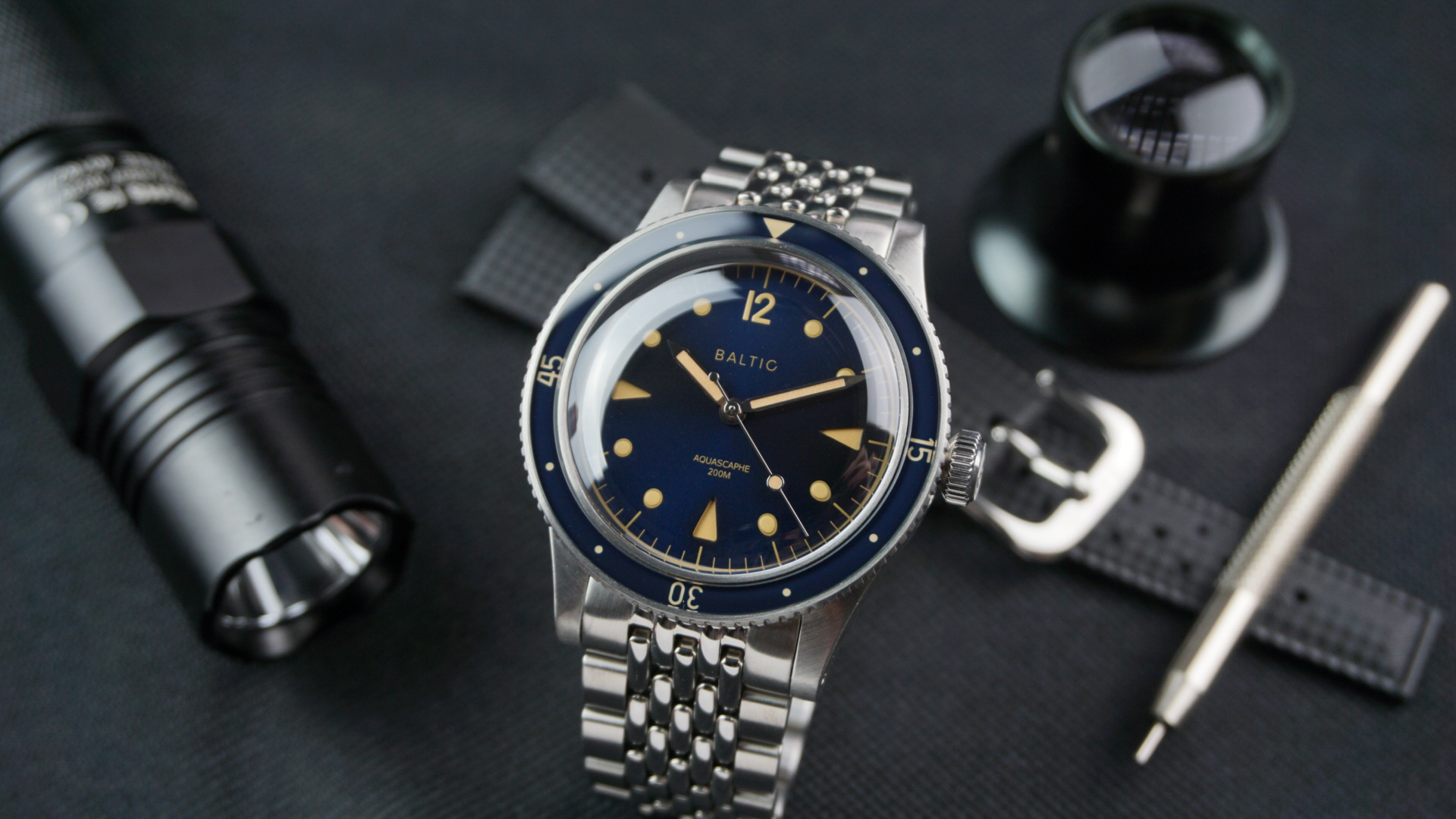 Usually when a watch has faux patina coloured lume, I sigh, and resign myself to the fact that it won’t be terribly bright. However, I was actually surprised by the Aquascaphe.  Whilst it doesn’t glow with Seiko levels of brightness, it’s still perfectly legible in complete darkness, even after the initial charge has worn off. And, it’s nice to see that Baltic haven’t compromised the Aquascaphe’s functionality, just for the sake of aesthetics. 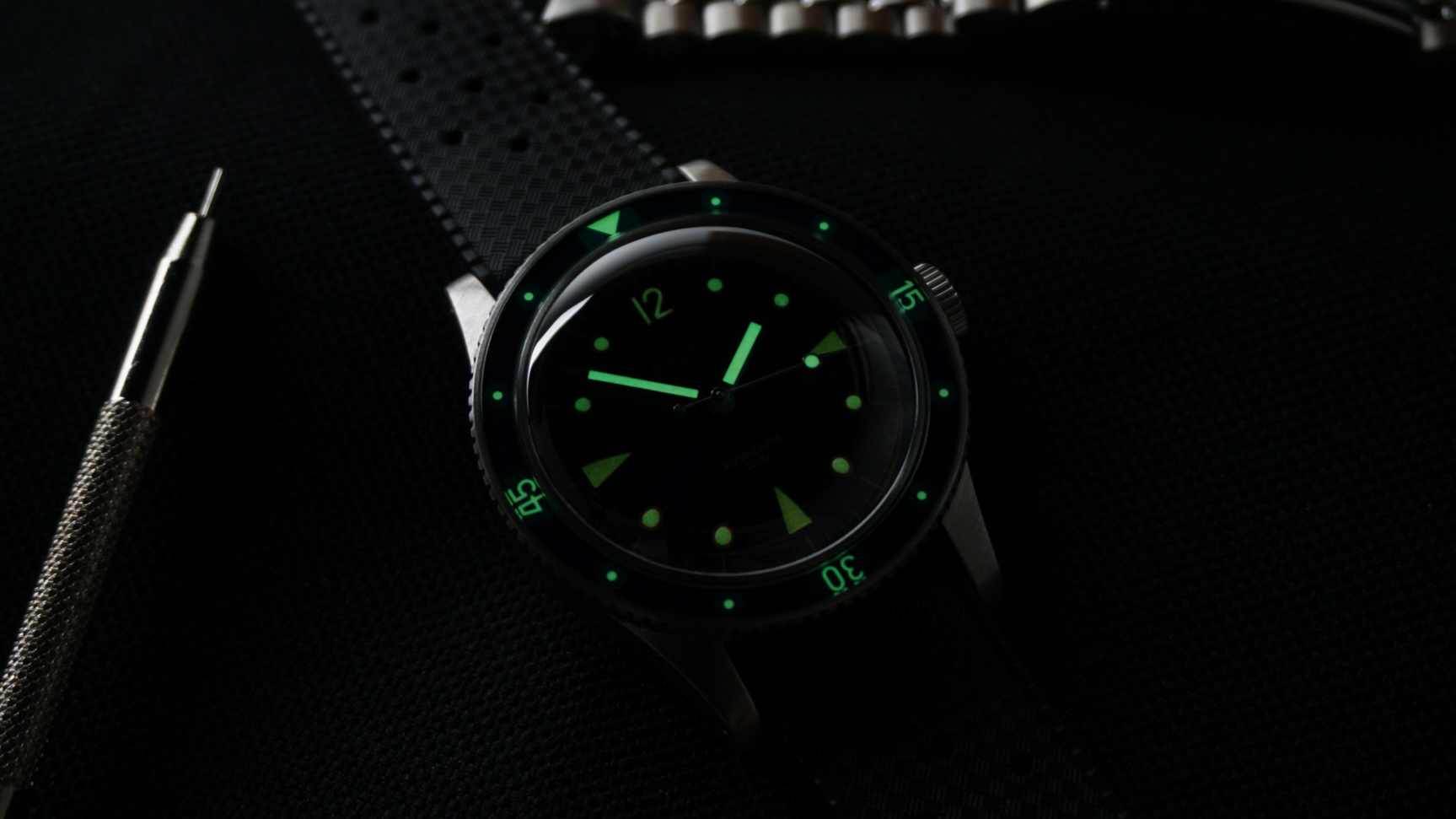 As with a ton of watches at this price point, Baltic chose the Miyota 9039 to power the Aquascaphe. The 24 jewel automatic movement is a popular choice amongst microbrands. This is because with a 42 hour power reserve and 4Hz beat rate, it’s an affordable alternative to the Swiss ETA 2824 and its derivatives.

Where Baltic go the extra mile though is that they personally adjust the movements themselves. This is all done at their workshop near Besançon in France, and it’s great to see a microbrand doing this sort of thing in-house. They aim for each watch to be accurate to 10 seconds a day across 4 positions, which I think is pretty good for an affordable mechanical watch. Of course, I had to time this one to see if it fell within spec, and I’m pleased to report that it is. Over a 24 hour period the watch gained 10 seconds. 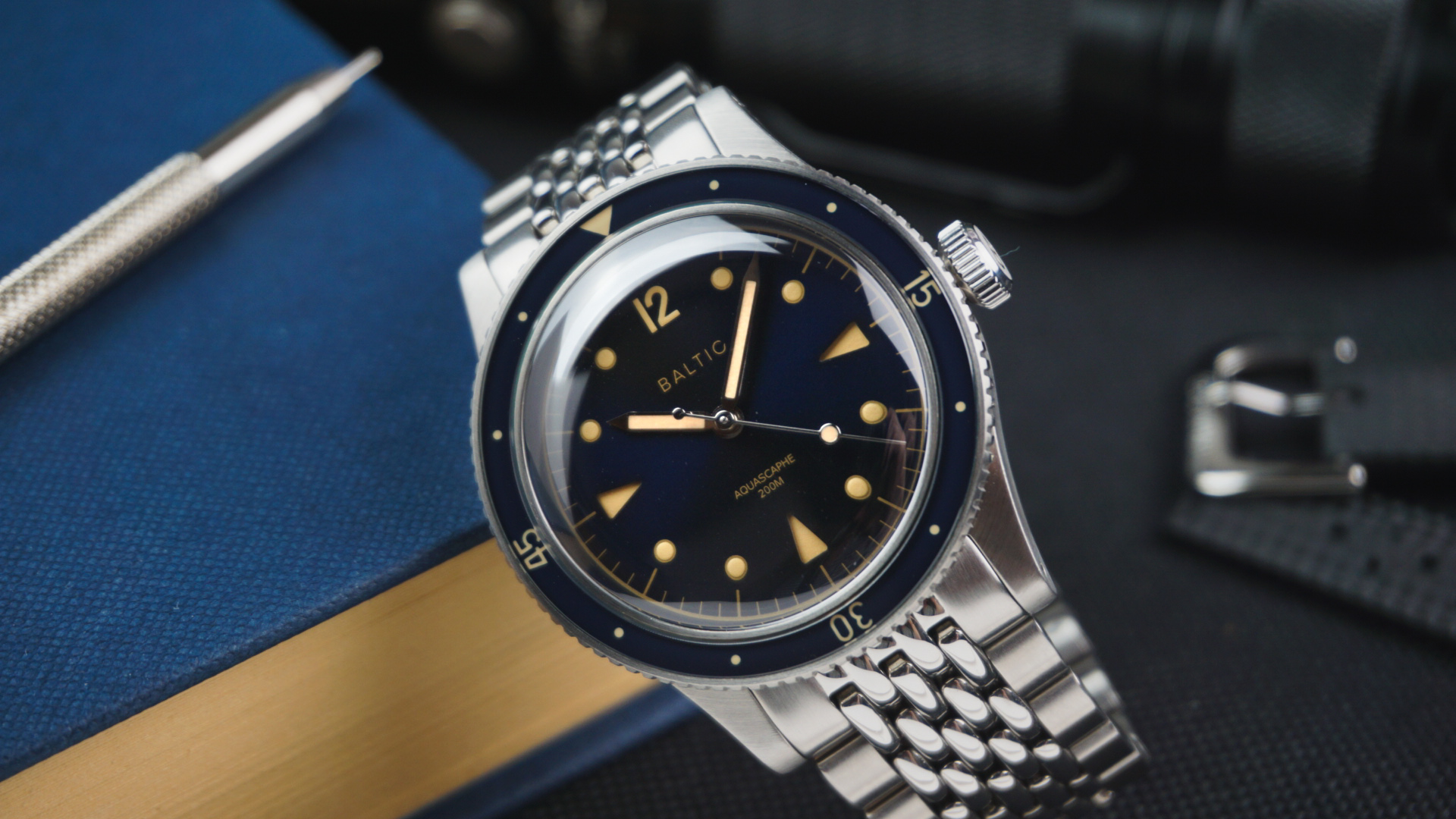 Now Baltic offer the Aquascaphe on both a beads of rice bracelet and an old school tropic rubber strap. Both options are classic strap pairings of divers back in the 1960’s, so they’re obvious choices here.

The beads of rice bracelet is both light and thin, but it doesn’t feel cheap. The finishing is spot on too. What’s more, Baltic used quick-release springbars, so you can remove or replace the bracelet in seconds. However it’s the clasp that’s the most interesting thing about the bracelet. Whilst most micros would have opted for a spring loaded fold over clasp, Baltic have gone for one that isn’t spring-loaded. I’m not sure how this clasp will hold up in the years to come, but I appreciate the throwback to vintage bracelets. It’s another feature that really helps the watch to feel like it belongs in the Sixties. 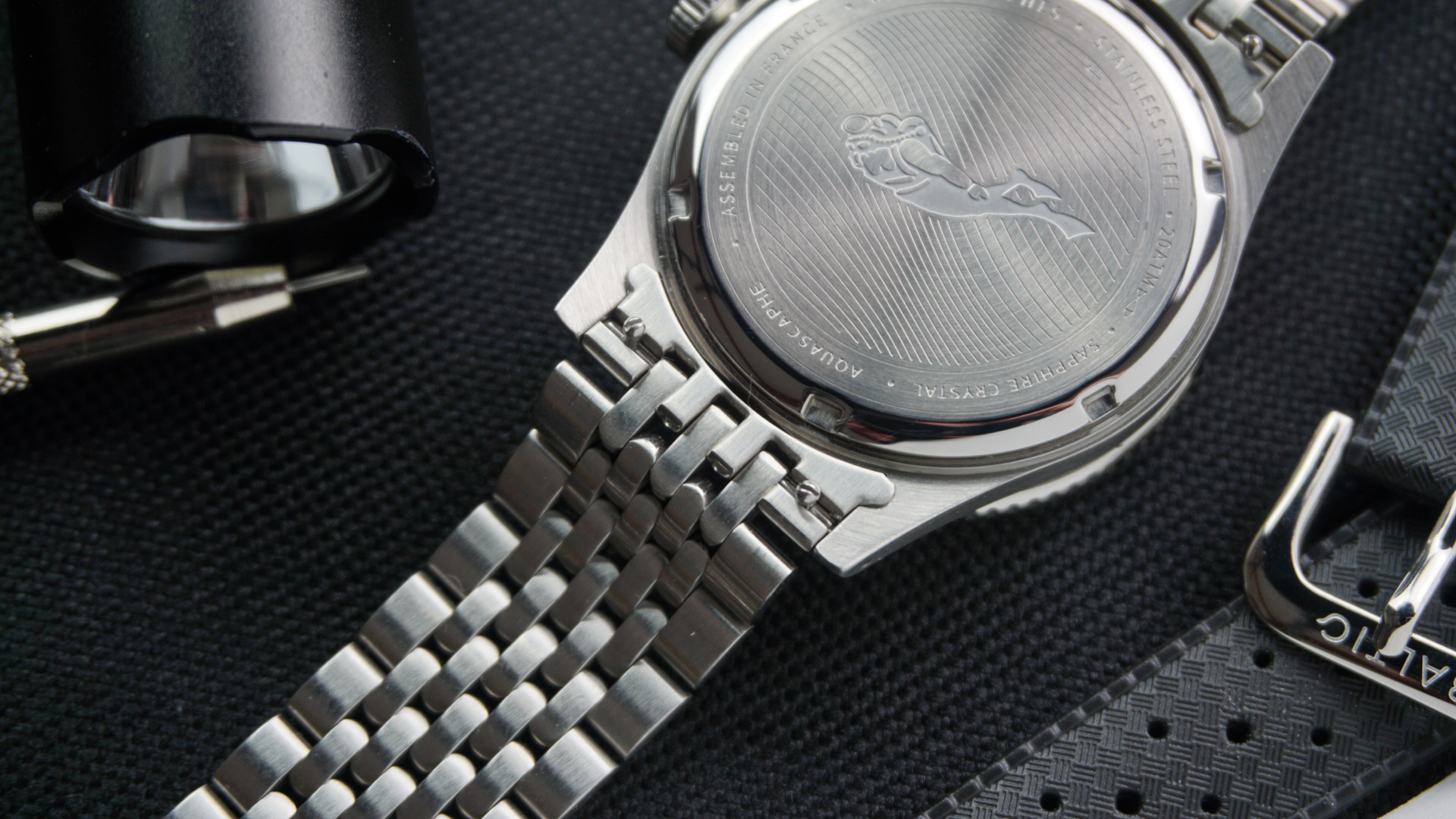 Meanwhile, the tropic strap is pretty much identical to the vintage originals, and it’s incredibly supple. It’s also perforated all the way up, so skinny wristed buggers like myself don’t have to worry about the strap being too big. Aesthetically it gives the watch a nice casual look that’s perfect for the weekends. 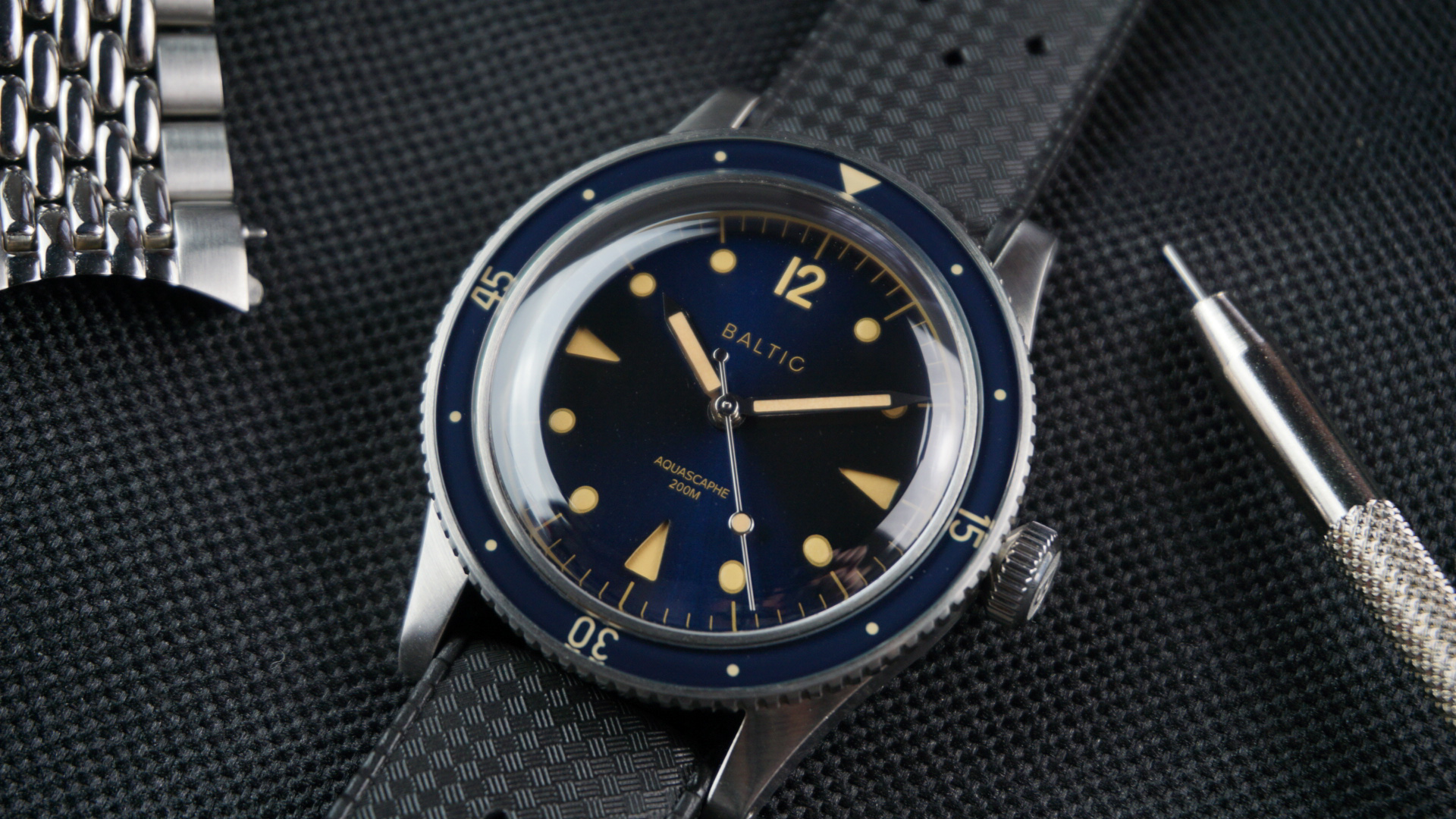 Of course, as you’ve probably noticed by now, the lugs are drilled. Baltic also supply a springbar tool with the watch as well. So if you fancy throwing the watch on another strap it’ll be a piece of cake. 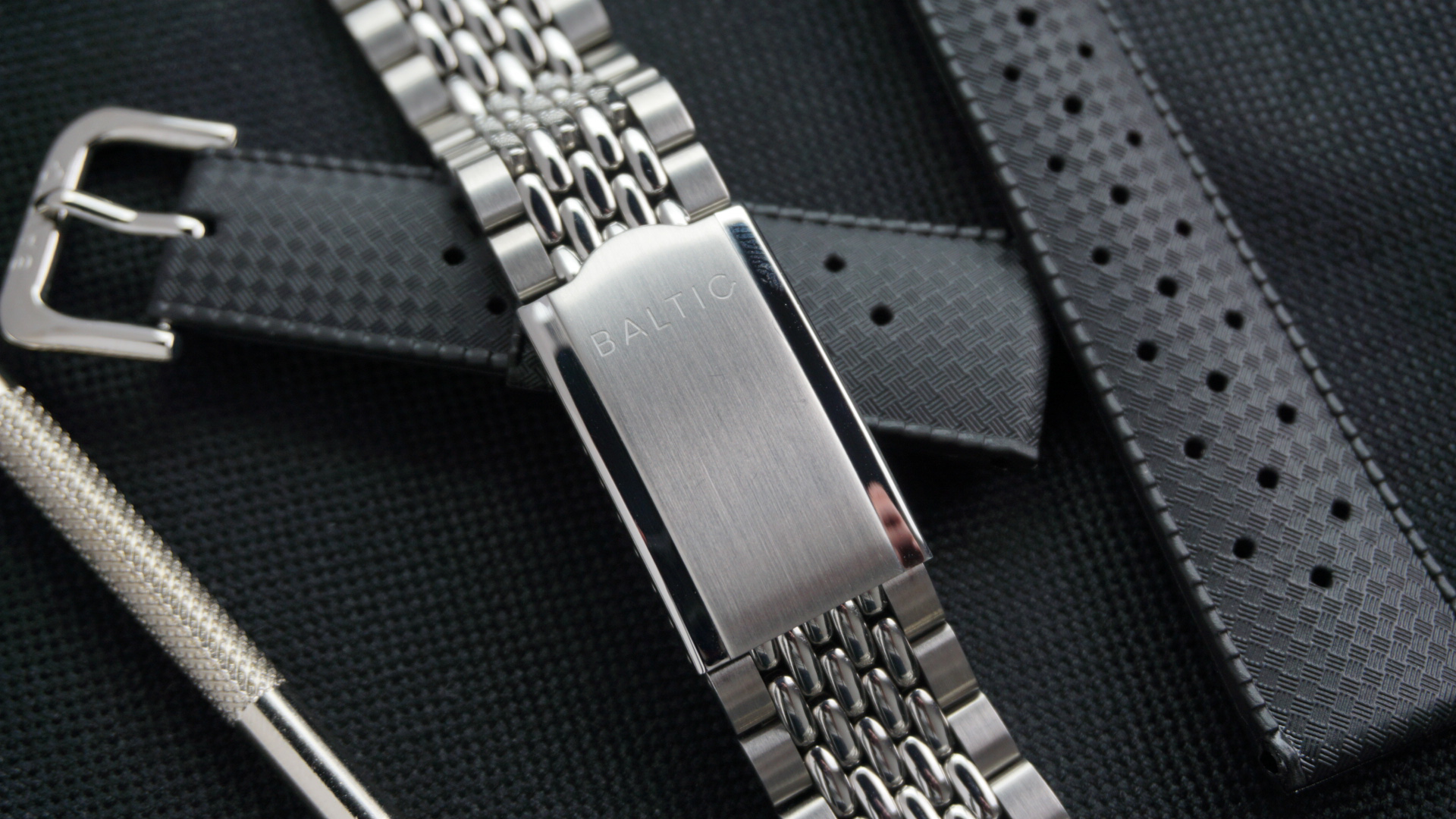 So, as I said in my opening line, the Aquascaphe really does feel like a vintage watch that’s just rolled off the production line. Baltic have packed it chock full of retro details that make you feel like you’ve stepped back in time.

And I really like that feeling. I think that’s where the Aquascaphe’s strength lies. It’s a watch that doesn’t just pay lip service to the vintage divers, but actually recreates their look and feel.

I think that feeling the Aquascaphe evokes is a great testament to Baltic’s design capabilities. And I really have to congratulate Baltic on releasing one of the best vintage inspired designs in recent memory.

Of course, it’s not all about the watch’s look. On top of the cracking design, the specs are also what you’d expect from a true dive watch. The movement is a rock solid Miyota, the crystal and bezel are tough sapphire, and there’s 200m of water resistance. 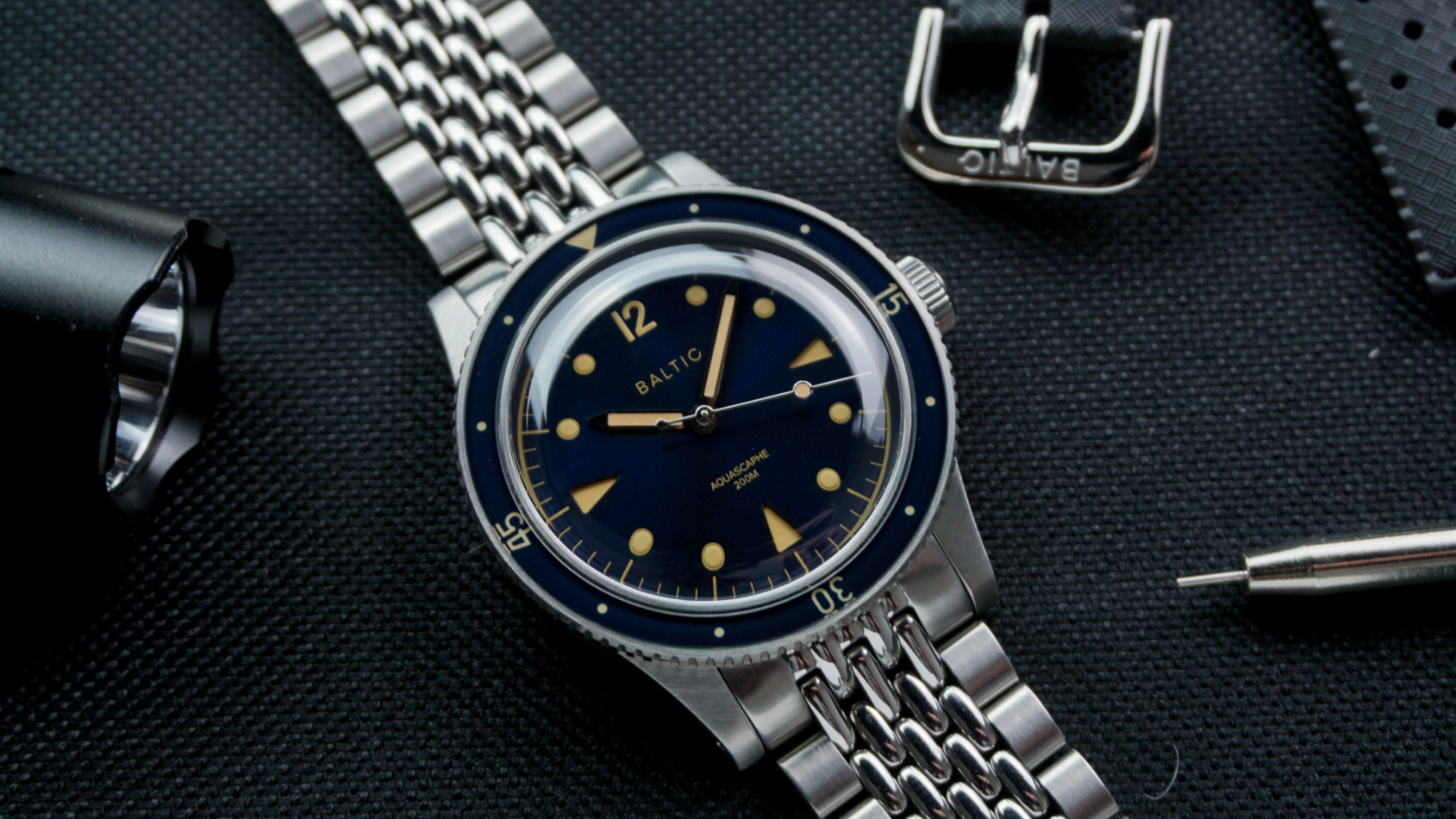 If I have to find fault with the watch, I’d say that the crystal should be replaced with a boxed one to help eliminate the reflections. Also, as I mentioned earlier, I’m not keen on the finishing of the lugs tops. I think it cheapens the overall feel of the Aquascaphe.

But other than that there’s not much I can really find fault with.

When it comes to pricing, with the Aquascaphe retailing from £630, it’s certainly not the cheapest micro diver out there. In fact the Alkin Model Two I reviewed a few weeks ago offers the same specs for just over £200 less.

But of course, the value of a watch is measured by more than what’s on paper. Aesthetics play a big part, and given the stellar job Baltic have done here, I’d say the price is fair.

And if you agree with me, the Aquascaphe is available in 3 colourways, and can be purchased from Baltic’s website here.