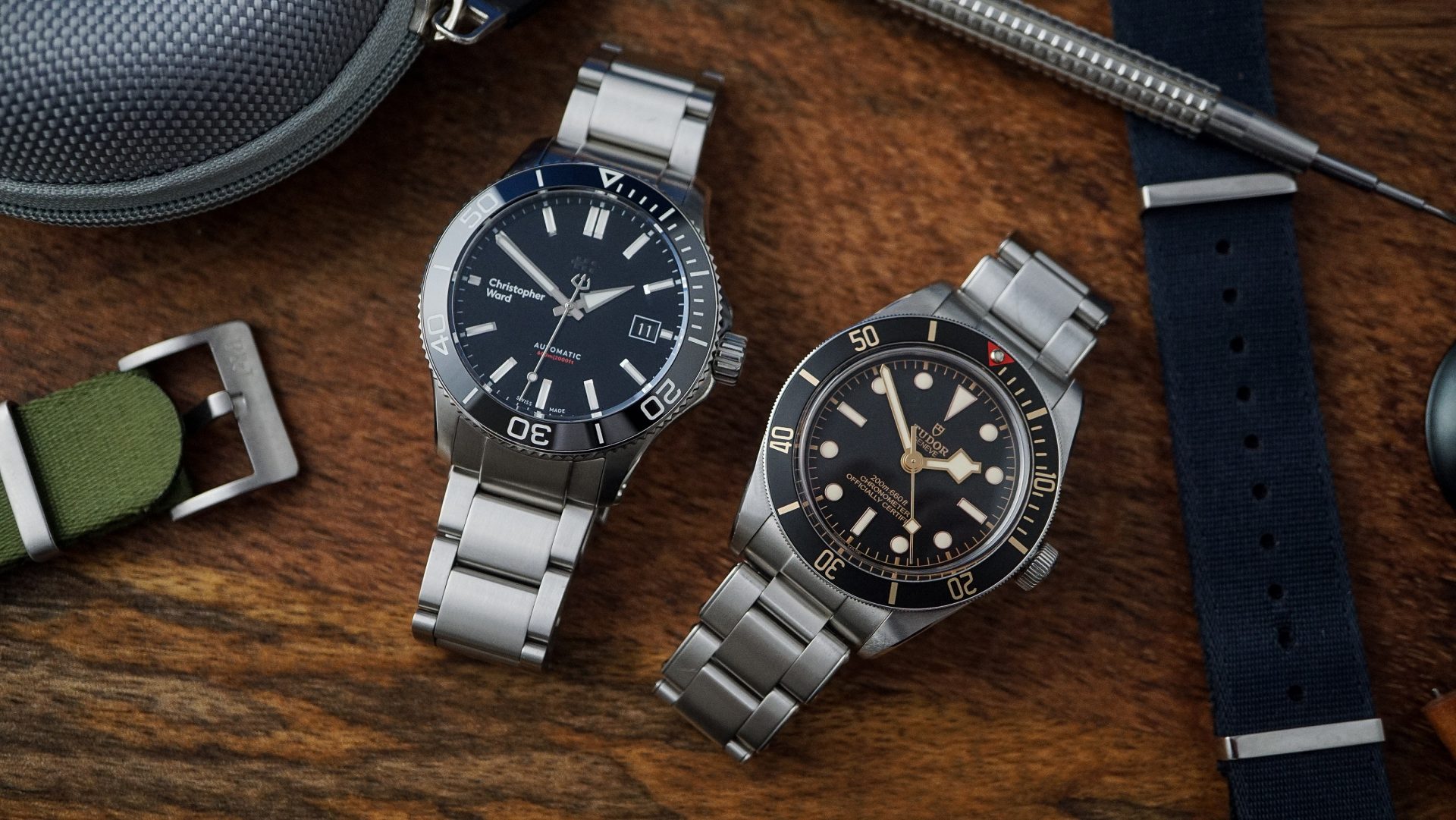 This might seem like an odd choice. The Tudor costs £2760, whereas the Trident is priced at just £795. On the surface these two watches appear to be in completely different leagues. And, if that is the case, then at least this article will illustrate what separates those tiers of watchmaking.

But fans of Christopher Ward think that the Trident punches well above its weight. Personally I think it’s one of the best divers out there under £2,000. Though that said, I don’t actually own a Trident anymore, so Josh from Watch It All About was kind enough to lend me his for this article, which he sent in one of his handy watch pods.

So let’s see exactly how that price difference translates to the watches themselves. As with my last comparison, I won’t bring aesthetics into it because we all have different tastes. What I will do is focus on the overall specs, the fit & finish, the lume, and of course the movement.

I think the first thing that immediately stands out when you compare these two divers is the depth ratings. The Black Bay 58 has a standard 200m, but the Christopher Ward has a whopping 600m. Now for 99% of us, this won’t make any difference whatsoever. But I think it’s an interesting point that the Trident has triple the depth rating at nearly a quarter the cost.

Speaking of depth ratings, the Trident holds another advantage over the Tudor thanks to its ceramic bezel. The Black Bay has an anodised aluminium insert, and it’s not going to be as scratch resistant as the ceramic on the Trident. The Trident’s bezel is fully lumed too, which is another plus. 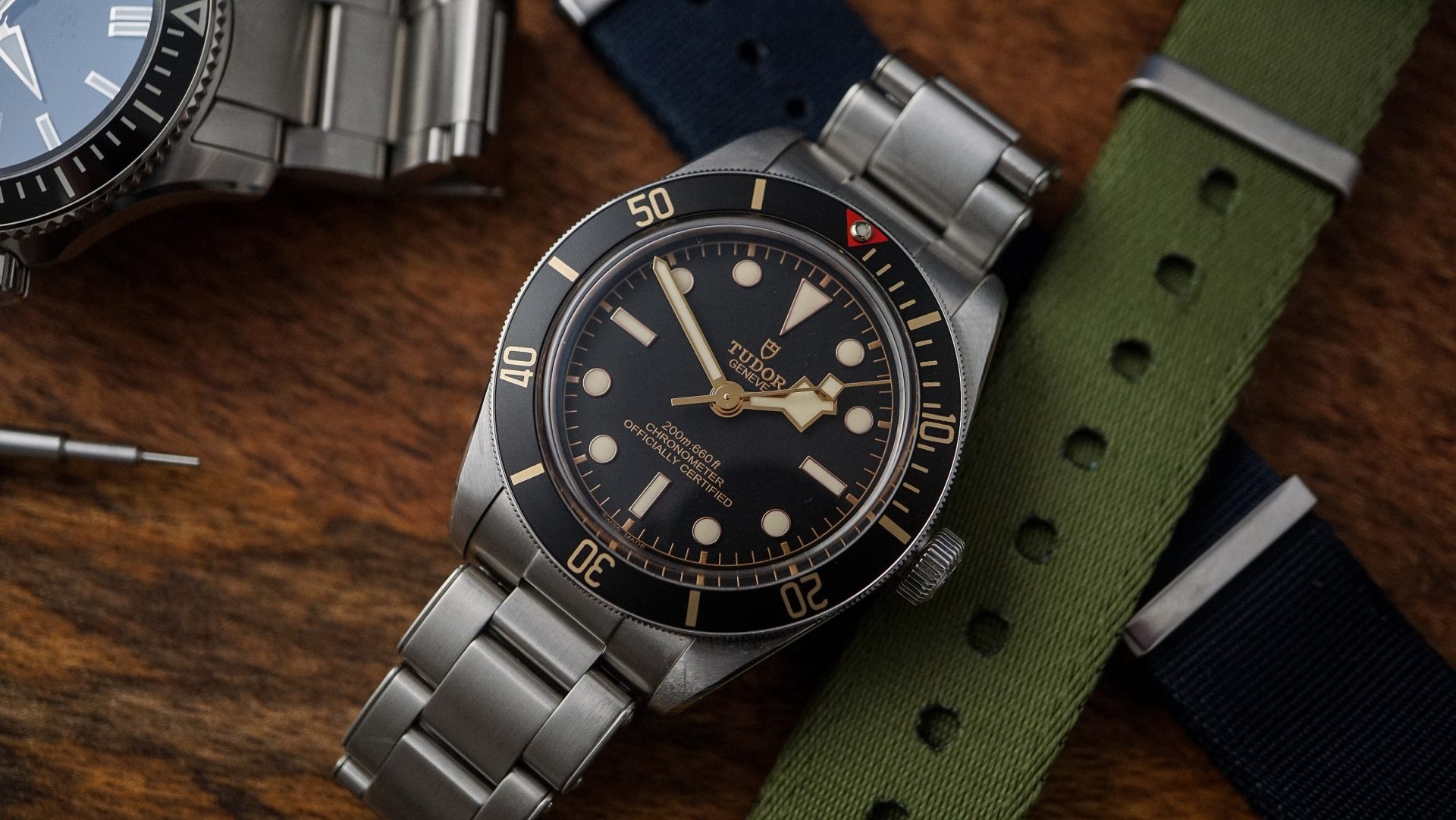 Now for me, the true test of a dive watch is in the action of the bezel. And, it’s here that the Christopher Ward proves to be a bit of a let-down. There’s a noticeable bit of play in it, though the action is nice and crisp. On the other hand the bezel of the Black Bay is damn near perfect. There’s almost no play at all, it the action is as smooth as butter. It even needs a touch more pressure to push it off the 12 o’clock mark, which reduces your chances of misaligning it.

If we move on to take a look at the bracelets, you’ll notice a couple of interesting differences between the two. As you’d expect the Black Bay has very snug end links, with only the tiniest amount of play between the lugs. The Trident has slightly more play, but the bracelet is a quick release, so it’s a coin toss as to which you prefer. It’s the same story with the clasps. The Tudor has ceramic bearings in the locking mechanism, which will prevent wear, but the Christopher Ward features a spring-loaded micro-adjustment. 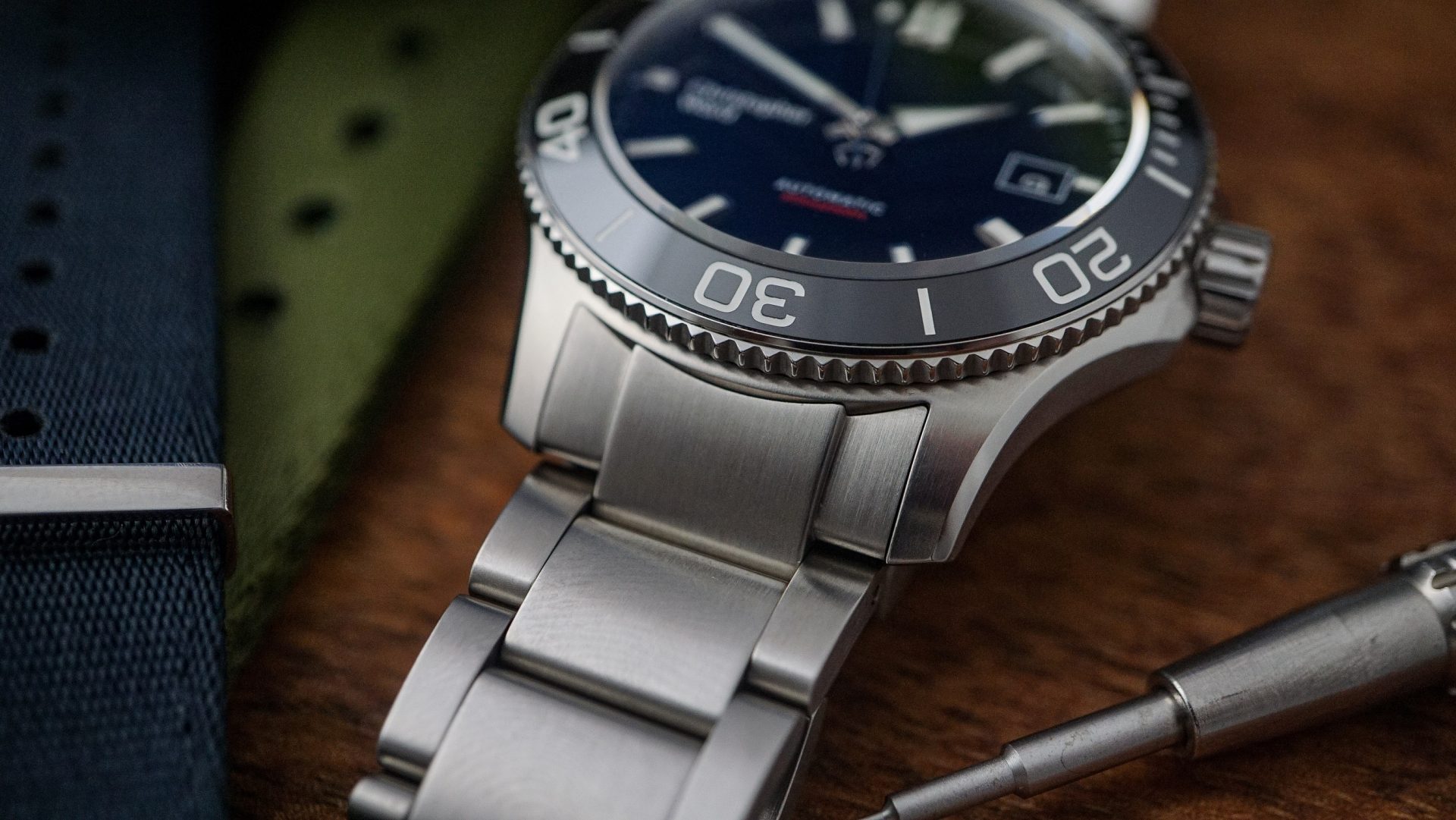 Comparing the brushing of the case and bracelet of each side by side, there’s very little in it. I spent a hell of a long time staring from one piece of brushed steel to the other. In the end I decided that the Tudor had the better finish. It’s brushing just has that extra lustre you’d expect from a watch made by a company of Tudor’s prestige. Of course that doesn’t mean that Christopher Ward did a bad job on the Trident’s case finishing. And, whilst I said I wouldn’t bring aesthetics into it, I do think the Trident has a more original and interesting case design. 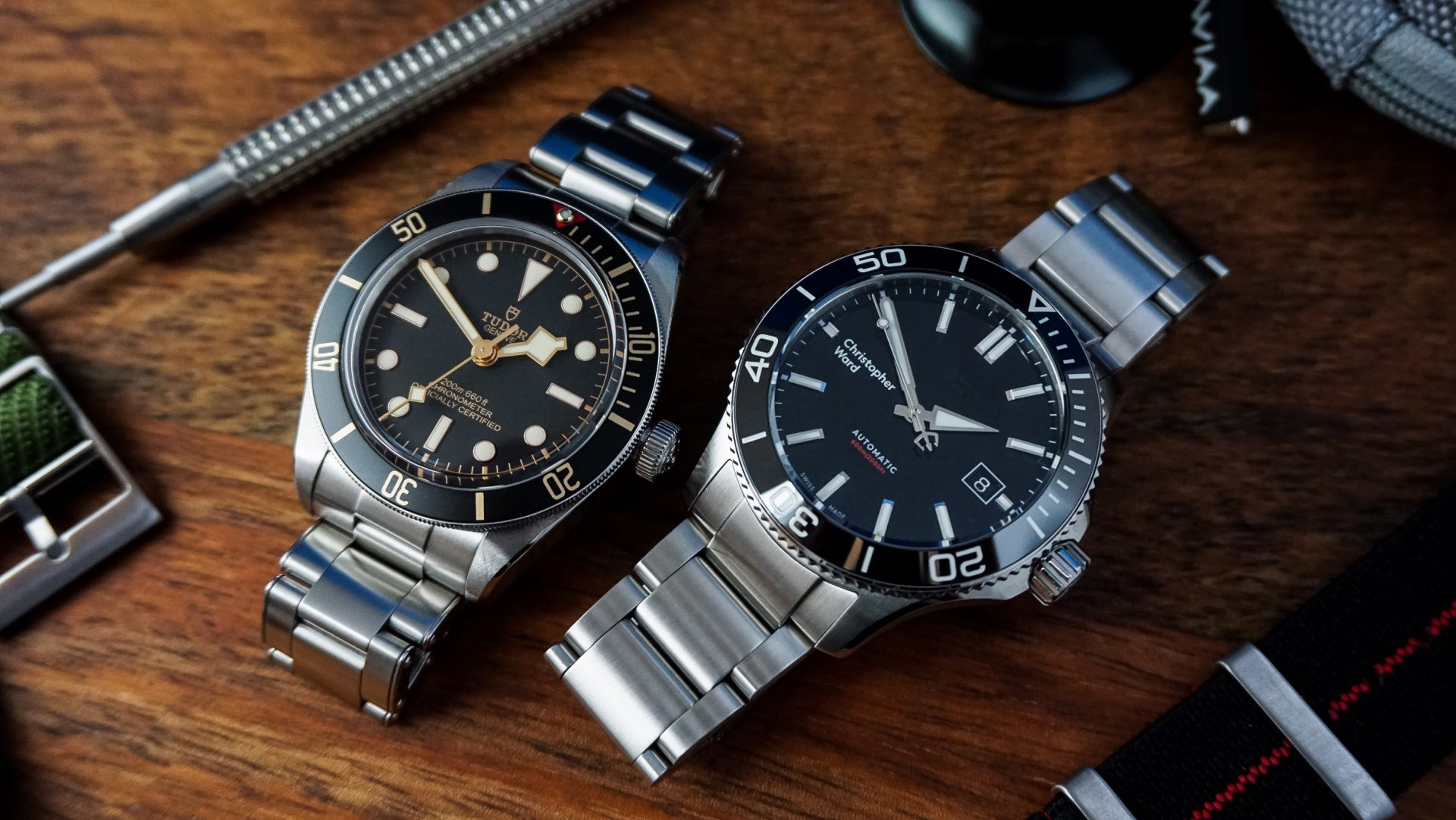 Naturally the other area of finishing to consider is the dial. In fairness, both dials appear flawless to the naked eye. It’s only once you magnify things that you can really see the flaws. The handsets of both watches aren’t perfect, with minor imperfections and specs of dust on them. However, the Trident has more of these in my opinion, and I think the edges of the hands aren’t as well finished either. Of course, as some of you must be thinking, the point is somewhat moot when you need a literal microscope to notice. Both watches use Super-LumiNova, and the MK3 Trident has far better lume than previous iterations. Fully charged, I think there’s very little between the two watches in terms of legibility. However, somewhat surprisingly, after 10 minutes the Tudor does clearly edge out in front. To be clear, the Trident is still perfectly legible, it’s just doesn’t remain as vibrant as its rival. 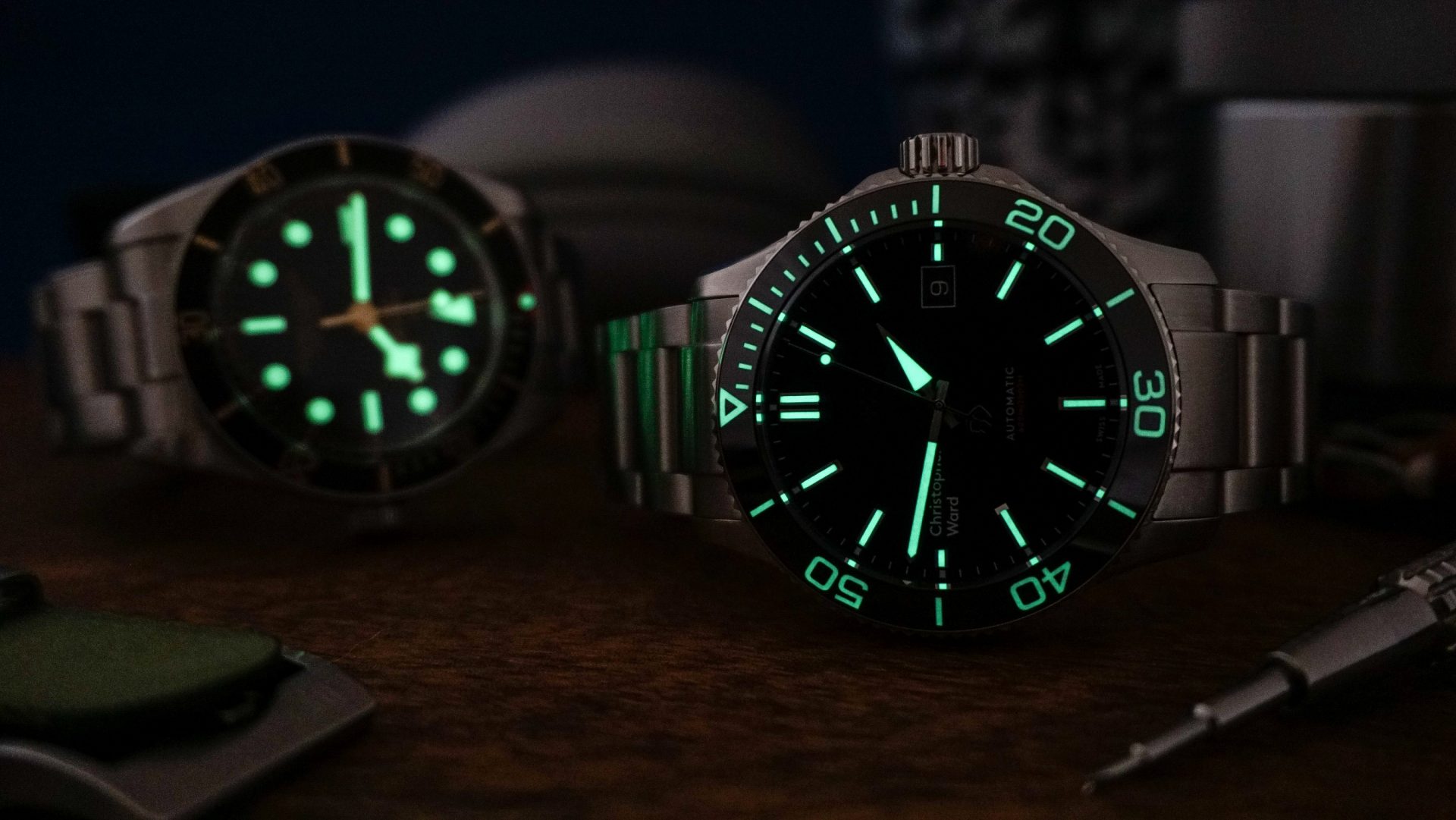 Obviously there’s not much in between the two when it comes to size. The Trident is 1mm wider with a 40mm case, and it’s also a millimetre thicker than the bb58, with a case height of just under 13mm. On the wrist the two watches wear exactly as you’d expect. The Trident feels a little bigger, and doesn’t sit quite so flush. Also a lot of the Black Bay’s height is in the domed crystal, so it seems to be even thinner than it actually is. Now obviously there’s no winner when it comes to sizing, but I thought important to show the differences between the two. 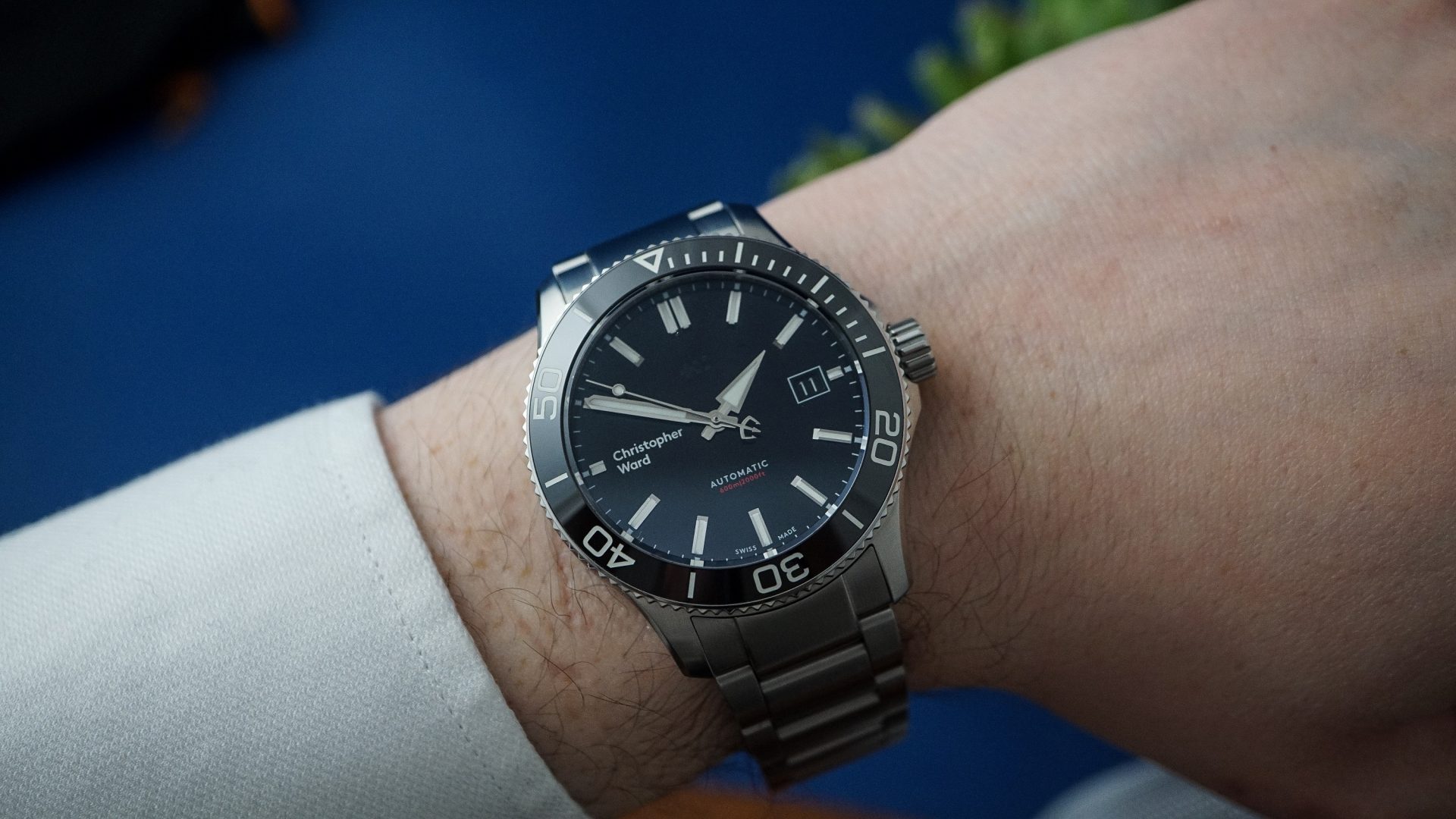 As you might expect the movements offer the biggest difference between the two pieces. Whilst the Black Bay 58 is fitted with Tudor’s latest in-house movement, the Trident has a bog-standard Sellita SW200. The MT5402 powering the Black Bay has all the specs you’d expect from a luxury watch that costs £2760. It’s a 27 jewel movement that has a meaty 70 hour power reserve, and naturally comes with chronometer certification.

In comparison the 26 jewel Sellita SW200-1 inside the Trident is, well, ordinary. As a clone of the prevalent ETA 2824, it has the same meagre 38 hour power reserve, and is accurate to just 20 seconds a day. It doesn’t take a genius to figure out that the Tudor is the clear winner here. There’s nothing wrong with the Sellita per se, but it’s nothing special. I won’t drag things out by pretending it’s not obvious which watch comes out on top here. As you probably guessed the Black Bay 58 wins this contest. That in house movement immediately puts it a tier above the Christopher Ward. However, what’s equally obvious is that the Trident isn’t a million miles away from it either.

Once you start to look past what powers these two, it becomes a lot tougher to distinguish which is best. In most areas the Tudor does still come out on top, but often only just. Christopher Ward made a very solid watch with the C60 Trident. There’s absolutely no denying that. But the Tudor have just gone that little bit further to offer a watch that feels incredibly well-polished. Now, whether or not that’s worth the £1965 more you’ll pay for the Black Bay is something that’s entirely subjective. These are two watches that are obviously in different leagues, but both pieces are most certainly bloody good bang for your buck.