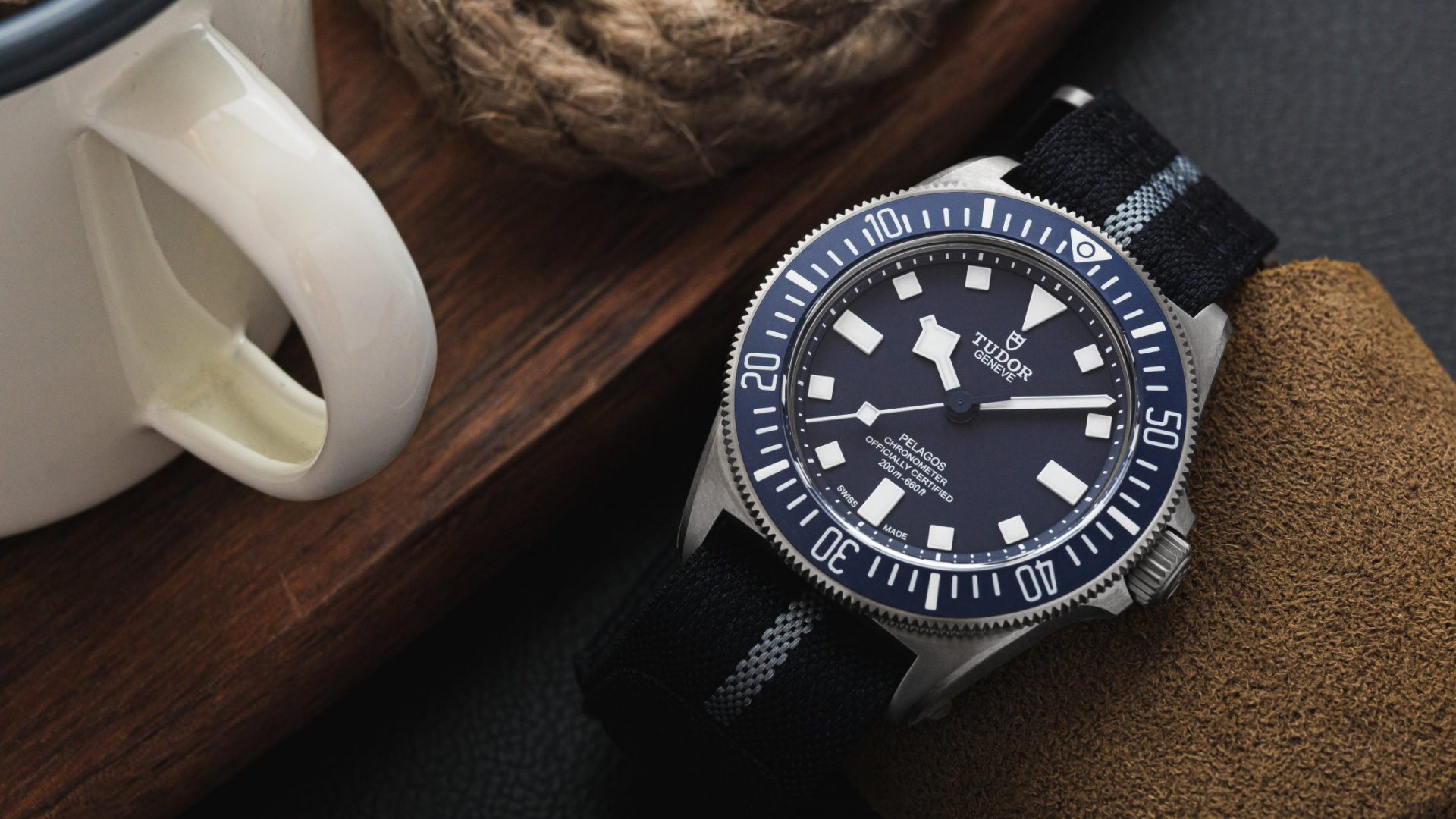 The Tudor Pelagos FXD – A Pure Tool Watch Through And Through

I have to admit that over the past couple of years I’ve become something of a Tudor fanboy. But, when Tudor released the Pelagos FXD in November 2021 I wasn’t immediately impressed. The watch looked rather big, even for 42mm, and I wasn’t keen on the squared lugs and fixed spring bars. Overall, my first impressions were that the watch was an oddly proportioned ugly duckling.

But, each time I’ve seen one in person, it’s grown on me to the point where I’m actually considering getting one. And the reason that I’ve grown to quite like the Pelagos FXD is that it’s so much nicer in the flesh than Tudor’s marketing suggests.

How The Pelagos FXD Wears

Take the wearability for example. On paper, the watch is rather large at 42mm wide with a whopping 52mm lug length, but that last measurement is misleading. The lug length is taken from the centre of the fixed spring bars, with the actual distance between the lug tips being a slightly more manageable 50mm. And at 12.75mm thick, it’s actually pretty slim. This means that whilst the FXD is still a large watch, it actually wears quite nicely, and even I can pull it off with my puny 6.25-inch wrists. Another thing that helps with the watch’s wearability is that the case is fashioned from titanium, with a steel case back, so the watch is exceptionally lightweight.

Two Straps For The Price Of One

And, whilst we’re talking about wearability, let’s take a look at the straps the Pelagos FXD comes with. For better or worse, the 22mm fixed spring bars on the FXD mean that it doesn’t come on a metal bracelet like the other Pelagos models. Instead, you get two one-piece straps – one fabric and the other rubber.

Both are very comfortable and of fantastic quality, but I must admit that I’m not keen on either. Both straps are too long for my small wrists, which leaves me with a lot of excess tail I can’t do anything with. The fabric strap is secured by velcro, which is something I’m not that keen on. I know it’s a matter of personal taste, but I think the fastening looks quite untidy. Personally, I’d put the Pelagos FXD on either a grey NATO or a green and yellow “Marine Nationale” strap, as I think both of those would simply look nicer.

The overall design is also something you can’t really appreciate from Tudor’s press images, and I think the watch looks a lot better in the metal than it does on their website. But before we talk about that, let’s talk about the story behind why the Pelagos FXD exists in the first place. I won’t give you an exhaustive history but, if you didn’t already know, Tudor has a long history of supplying watches to the Marine Nationale. The relationship between the two began way back in 1956 when Tudor sent its first-ever dive watches in for evaluation. The watches were judged to be perfect, and so Tudor became an official supplier to the Marine Nationale from 1961 right up until the mid-1980s.

The Pelagos FXD is the first watch since then that Tudor has supplied to the Marine Nationale, and the cool thing about it is that the French Navy’s elite Commando Hubert unit actually had input on its design. As a result, the FXD isn’t just a normal watch that’s had a military connection slapped on it, but a proper purpose-built military watch.

The most obvious military influence is the fixed spring bars that give the Pelagos FXD its name. Whilst they severely limit the strap choices for the watch, they do prevent the watch from being lost during use, which is pretty crucial if you’re a navy swimmer relying on the FXD for timekeeping

The bezel has also been redesigned to suit the Marine Nationale’s needs of aiding swimmers in underwater navigation. It’s bidirectional, with the numerals on the ceramic insert being reversed so that they count down, rather than up. The prominent teeth on the Pelagos FXD’s bezel also make it extremely easy to grip, and the action is as crisp as you’d expect from Tudor.

Something that I know did irk fans of the standard Pelagos is that the FXD dropped the 500m depth rating and helium escape valve of the standard model in favour of a more average 200m. For me, it’s a complete non-issue, as I’ll never need more than a 200m depth rating, and I prefer the thinner case that resulted from the change.

The dial and handset are very similar to that of the standard Pelagos, but there’s no date window and the hour markers don’t cut into the rehaut. What’s left is a simple and highly legible dial, protected by a flat sapphire crystal. The handset and markers have a matte finish that provides excellent contrast, and which perfectly demonstrates the practical nature of the FXD. And as for the the lume? Well, that’s naturally excellent too.

Now, something else I really like about the Pelagos FXD is the shade of blue it uses. It might sound silly, but I think that the blue used on the standard Pelagos is too bright and that it cheapens the look of the watch. On the other hand, the blue on the FXD is a darker shade that’s closer to the colour of the BB58 Blue. The more muted colour suits the functional nature of the watch and helps give the Pelagos FXD its excellent legibility.

Beneath the dial lies Tudor’s calibre MT5602. This in-house automatic movement has an impressive 70-hour power reserve, a 4Hz beat rate, and a silicon balance spring. Furthermore, the movement is COSC-certified, so it will be accurate to -4/+6 seconds per day. In short, it offers everything you could expect from a movement at this price point.

Of course, despite all things I like about the Pelagos FXD, I’m under no illusions as to why it exists. And that’s that Tudor obviously chose to rekindle their relationship with the Marine Nationale for commercial benefit. I think we all know that the French Navy didn’t need Tudor to make them this watch. At the end of the day, this is still a luxury product that Tudor created because they know that a watch made for the French Navy will appeal to us watch enthusiasts.

Well, they’re completely right. However, that doesn’t stop the FXD from being a true purpose-built military watch. That’s why it looks somewhat quirky and unconventional, and it’s also why I’ve grown to love the slightly odd design. This is a proper tool watch that’s designed for a specific purpose, and it makes absolutely zero concessions for the sake of aesthetics or convention.

And, as a result of that, the Pelagos FXD has everything I could need in a diver. It’s accurate, highly legible, and lightweight. Plus with the fixed bars I’ll never have to worry about losing it. And, with a retail price of £3,000 or $3,900, it’s pretty well priced in comparison to Tudor’s other watches, being about 18% cheaper than the standard Pelagos. So, whilst I feel that it’s important to acknowledge the commercial reality behind this watch, it’s still a fitting successor to the original Marine Nationale submariners, and I still really want one.

You can read more about the Pelagos FXD on Tudor’s website here.