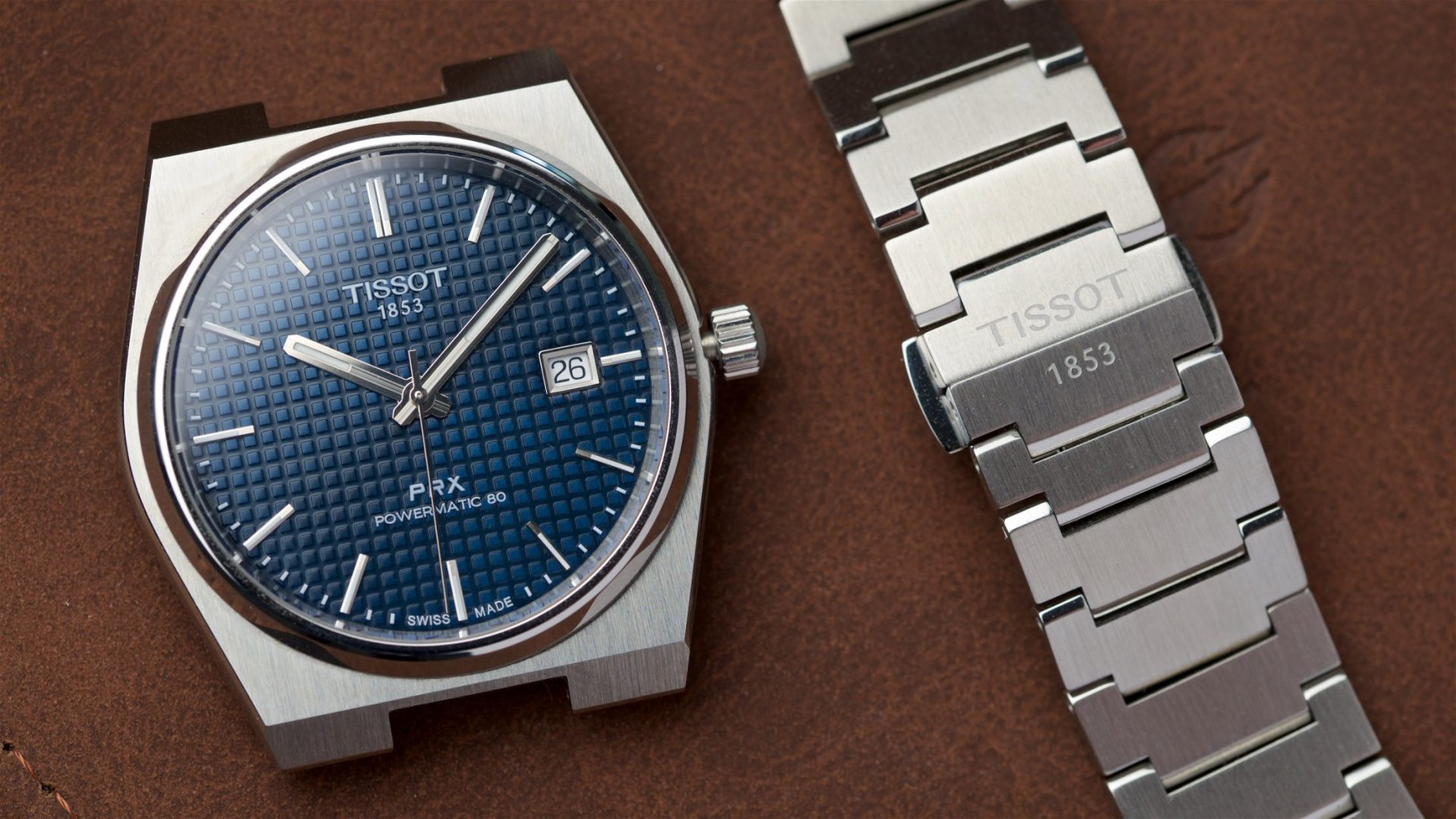 When Tissot announced the quartz PRX in 2020, the watch world seemed impressed, an accessible, original Tissot design brought back from the late 70s and reimagined into a modern 40mm case. Being a child of the early 90s I was not alive to witness the birth of the integrated bracelet watch, but I have been around watches long enough to know this was a big deal. Pioneering this trend were the Audemars Piguet Royal Oak released in 1972, followed closely by the Patek Philippe Nautilus in 1976. Both of these shared a similar design DNA: stainless steel, with an integrated bracelet, decent water resistance and a style that would suit anywhere from the beach to the boardroom. The similarity between the two is no surprise as they were both designed by the now legendary Gerald Genta. The Royal Oak and Nautilus remain to this day some of the most sought-after watches fetching several times their retail price on the secondary market, with some people even crediting them for saving the Swiss watch industry from the quartz crisis.

Understandably, many other brands were keen to get in on this new trend including Tissot, who in 1978 released their Seastar, a 35mm stainless steel design with an integrated bracelet. Keen to embrace new technologies, the watch featured the brand’s first quartz movement but kept a very legible 3-hand plus date design. The name Seastar was soon replaced by PRX with the ‘PR’ standing for ‘Precise’ and ‘Robust’ and the X representing the Roman numeral 10, indicating the watch had 10 atmospheres or 100m of water resistance.

Tissot’s re-released quartz PRX line-up was an outstanding success for the brand when announced back in 2020. The watch offered entry into the integrated bracelet world while still being considerably more affordable than a lot of the competition. Tissot has since followed up on the quartz models with Powermatic 80, 35mm models and most recently a 42mm chronograph. It’s started to feel like there is a PRX for everyone, including myself.

My Experience With The Tissot PRX

The PRX I eventually settled on after much deliberation and going backwards and forwards to the AD was the 40mm Powermatic 80 in blue. While the quartz, especially the 35mm models, are closer to the original, I couldn’t resist the beautiful textured dial and smooth sweep that the Powermatic 80 movement offers.

The case of the larger PRX is 40mm in diameter, 10.9mm thick, and with a lug-to-lug of 39.5mm which sounds like an ideal watch for any wrist size. However, these measurements are deceptive. Watches with integrated bracelets wear far larger than an equivalent size circular watch. In much the same way that square watches tend to wear large due to the greater visual presence on the wrist. The design coupled with the rigid first links of the bracelet means the PRX feels more like 42mm on the wrist.

The case and bracelet are 316L stainless steel with a fine brushed finish across most surfaces highlighted by polished bevels to the case, bezel and between the links. The brushing is vertical across the sides of the watch and is of a very high standard, being smooth and uniform throughout. The bevels add to the look of the case breaking up the design and allowing it to catch the light.

Just like the original, the modern PRX is rated to 100m of water resistance and while modern seals and gaskets have improved greatly since the 70’s I would still exercise caution as the crown is only a push/pull rather than a screw-down more commonly seen on heavily water-resistant watches.

No review of the PRX would be complete without a moment of appreciation for the bracelet. This is without a doubt the standout feature with its gorgeous flat links, polished betweens and a heavy taper. The quality of the bracelet is a testament to the value Tissot offers in the sub £1000 price range. The bracelet ends in a simple yet functional two-button release butterfly clasp.

The bracelet features quick-release spring bars making strap changes easy, although, with the integrated lug design, you will need a PRX-specific strap if you wish to change. Since the 2020 release of the PRX, Tissot has added the option to purchase the 40mm versions on a fitted leather strap alongside the original bracelet options. Although, I think mine will remain on the bracelet as I think this is my favourite part of the watch and the feature of the watch that sets it apart from many others in the sub-£1000 category.

If I had to pick a negative of the bracelet, it would be the butterfly clasp which, while comfortable, lacks micro adjust. Saying this, Tissot has made an effort to minimise problems in finding the right fit by providing multiple half links which should work for most wrists.

The dials of the Powermatic 80 versions all share the same waffle pattern with framed date windows at 3 o’clock and are protected by a flat sapphire crystal. The clean look is aided by minimal text, with only ‘Tissot 1853’ and ‘PRX Powermatic 80’ found in the centre of the dial. This is a refreshing break from the essay of specifications that are found on many modern watches. Finally, a small ‘Swiss Made’ designation can be seen on either side of the 6 o’clock index, something which all Tissot watches proudly display. The indices are simple applied battens which elevate the look of the watch, adding to the visual interest and light play.

The hour, minute hand and indices are all lumed although this is short-lived and adds very little to the functionality, fading quickly. The finishing of the hands is to a very high standard and under a loupe show the faceted edges and a range of textures.

The movement in all of the automatic PRXs is the Powermatic 80.111, a minimally decorated 23-jewel movement made by the Swatch group with a custom rotor and a patented Nivachron balance spring. Nivachron is one of many new materials entering the watch world designed to reduce the effects of magnetic fields and temperature fluctuation on the accuracy of the watch. Something must be working because this is the second Powermatic 80 movement I have owned and both run within COSC specification since being bought, despite neither being officially Chronometer rated.

As the name suggests, the Powermatic 80 has an 80-hour power reserve achieved by reducing the beat rate of the movement from 4Hz to 3Hz. Considered as a negative by some to lose the smoothness of the second-hand sweep, it makes a refreshing change compared to the standard ETA’s and Sellita’s which generally feature a 38-hour power reserve.

I think the case can be made that within the current line-up of 22 variations of the PRX as listed on the Tissot website, there is one to suit every wrist. Mine even won out over my BB58 as my watch of choice for a recent family wedding. The BB58 is undoubtedly the better watch, as it should be at almost 5x the price, but I wanted something with a little more wrist presence and a more eye-catching design and that’s where the PRX truly shines. The waffle dial and bracelet come together to make a watch which looks good from any angle.

Overall, I think that Tissot has a winner with the PRX, everything about the watch is right on trend and manages to feel classic yet modern. I think the design will be around for years to come offering an affordable entry into the world of integrated bracelets.

So, if you haven’t had a chance to try out the PRX, I recommend heading to your local AD and spending some time with the range, because you never know!

You can read more about the PRX range on Tissot’s website here.