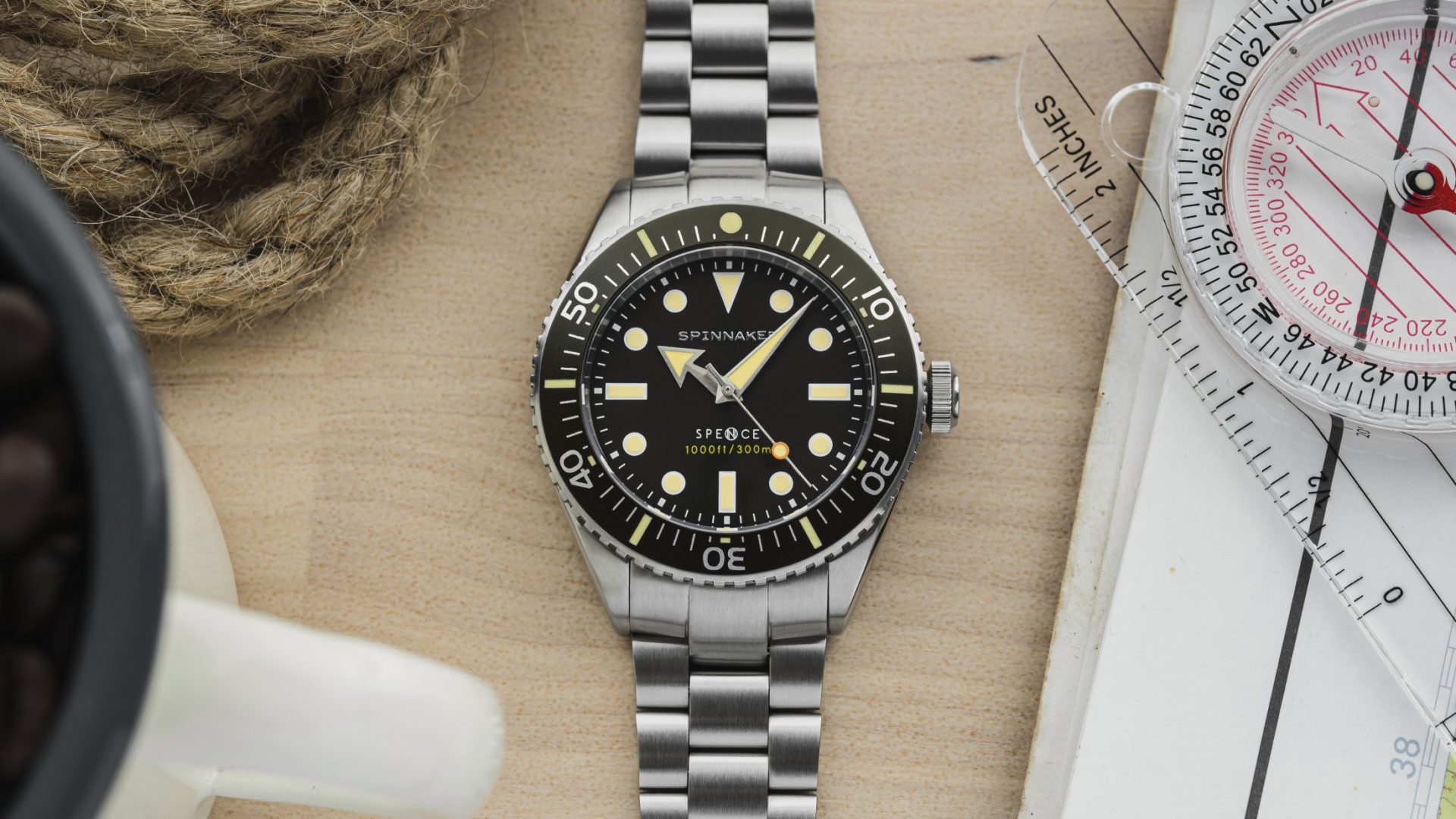 One of the most important things to consider when buying a watch is wearability. It doesn’t matter how nice a watch looks, if it’s not comfortable to wear then we probably aren’t going to buy it. A watch’s thickness plays a big part in that comfort, which is why Spinnaker’s latest dive watch is its thinnest yet.

The new model is called the Spence and it’s a mere 10.9mm thick, which makes it one of the thinnest divers on the market, and certainly at this price point. The watch retails for £500 and there are five colours to choose from.

The Spinnaker Spence Feels Great On The Wrist

The sample the Spinnaker sent me is the Hickory Brown colourway, and as I said it’s a very comfortable watch on the wrist. In addition to being very thin, the steel case is 40mm across with a lug-to-lug measurement of 48mm. These dimensions are an ideal sweet spot for most wrists, and it means that the Spence doesn’t feel too big or too small. When I’m wearing it the Spence feels very reminiscent of the Black Bay 58, which is unsurprising, because as you can see from the design it’s really channelling that big crown Submariner vibe.

Speaking of crowns, the large screw-down crown on the Spence is nice and easy to grip and use. The same goes for the uni-directional bezel, which has absolutely zero back play and turns with a very satisfying series of smooth clicks, though unfortunately it is slightly misaligned. The overall finish of the case is pretty decent too, with nice even brushing, but I think that the case chamfers could be a bit sharper.

You Get Two Straps For The Price Of One

The Spence comes with two strap options – a steel oyster bracelet and a water-resistant leather strap. The bracelet is of good quality for the price point and the links are nice and thin so that they don’t overpower the watch. The bracelet uses male end links, which makes the Spence wear a bit larger on the wrist, however, they curve sharply downwards, so they don’t make a massive difference compared to using female end links. But I do think that I’d have preferred it if the Spence had female end links.

The clasp is the standard design found on many affordable watches, and it’s got six micro-adjustment positions, making it easy to find a comfortable fit for the bracelet. If I had to be picky, I’d say that the clasp is a bit big given the size of the watch, but then again I don’t expect a custom clasp at this price point.

The leather strap is supple and has a nice buckle, but the material isn’t the best quality. Fortunately, the lugs are 20mm, so you’ve endless aftermarket options if you’d prefer to try the Spence on another strap. Personally, I think the Spence looks fantastic on an olive green NATO, which gives the watch a bit of a military vibe. I would have liked to have seen the Spence come with drilled lugs to help with strap changes, but their absence isn’t the end of the world.

In addition to being incredibly thin, the Spence also has some decent specifications. Firstly, it’s water resistant to 300m, which is pretty impressive given its size. It’s also got a sapphire crystal and is powered by a Miyota 9039 movement. Most of us will be familiar with this Japanese automatic calibre as it’s widely used by brands after an affordable and reliable movement. It features 24 jewels, a 4Hz beat rate, and a 42-hour power reserve.

The lume is probably the one area that lets the Spence down. It’s bright enough when charged, but it soon dims to a faint glow. Its only saving grace is that as the hands and markers are fairly big, they’re easier to read in the dark.

A Design That’s Familiar But Not A Homage

When it comes to design, the key elements of the Spence are all fairly standard. The dial follows the classic Submariner layout, and it’s paired with a simple broad arrow handset. However, Spinnaker has added a few extra touches that make the design feel fresh.

For example, the use of brown is an obvious reference to “tropical” vintage dive watches that have patinaed with age, whilst the dial has a subtle sunburst to it that creates a range of shades, rather than a flat block of colour. A couple of other nice touches are that the hour markers have a white border, and the lollipop on the seconds hand is orange.

All these things help the Spence to feel familiar whilst not being too derivative of any specific watch. The resulting design is both simple, attractive, and legible without looking boring. Often watches like this can look very similar to one another, but I think that Spinnaker has done a great job of putting a bit of a spin on a classic dive watch styling.

The one element of the design that I’m not particularly fond of is the lumed inserts on the bezel. The colour of the lume doesn’t match that on the dial and hands, and the finishing of them isn’t great. Whilst I like the concept, I think the Spence would look a lot cleaner if all the markings on the bezel were silver instead.

My Thoughts On The Price Of The Spinnaker Spence

Regarding the £500 price tag, I think that there are some people who are used to Spinnaker pricing their watches a bit cheaper than the Spence, and who will find its asking price a little on the high side. It’s completely understandable as the Spence is definitely at the top end of Spinnaker’s catalogue, with most of the brand’s watches priced well under £500. Personally, I think the Spence could be slightly cheaper to make it a more tempting affordable value proposition. However, the price of the Spence compares pretty favourably to similarly specced thin dive watches like the Baltic Aquascaphe, which costs approximately £676 including tax, or the NTH Subs, which cost £650. The Spence also has a very similar case design to the NTH Subs, so it’s a good alternative to the NTH if the price of that watch is a bit steep for you.

I think it’s fair to say that the Spinnaker Spence is not without its flaws. In my opinion, there are a few minor things here and there that hold it back from being a truly incredible piece. But that doesn’t mean that it isn’t still a good watch.

It’s got some good specifications, a solid build quality, and it’s powered by a reliable movement. And, as I keep harping on about, it really is exceptionally wearable. I’m also a big fan of this brown version. Brown is a colour that I think is very underused in watch design. It might sound odd, but it allows for a more unusual look without coming off as gimmicky.

Overall I think that the Spinnaker Spence is a solid pick for anyone after a fun, easy-to-wear diver at an affordable price. It ticks a lot of the boxes whilst managing to offer an original look to a classic design.

You can read more about the Spence 300 on Spinnaker’s website here.