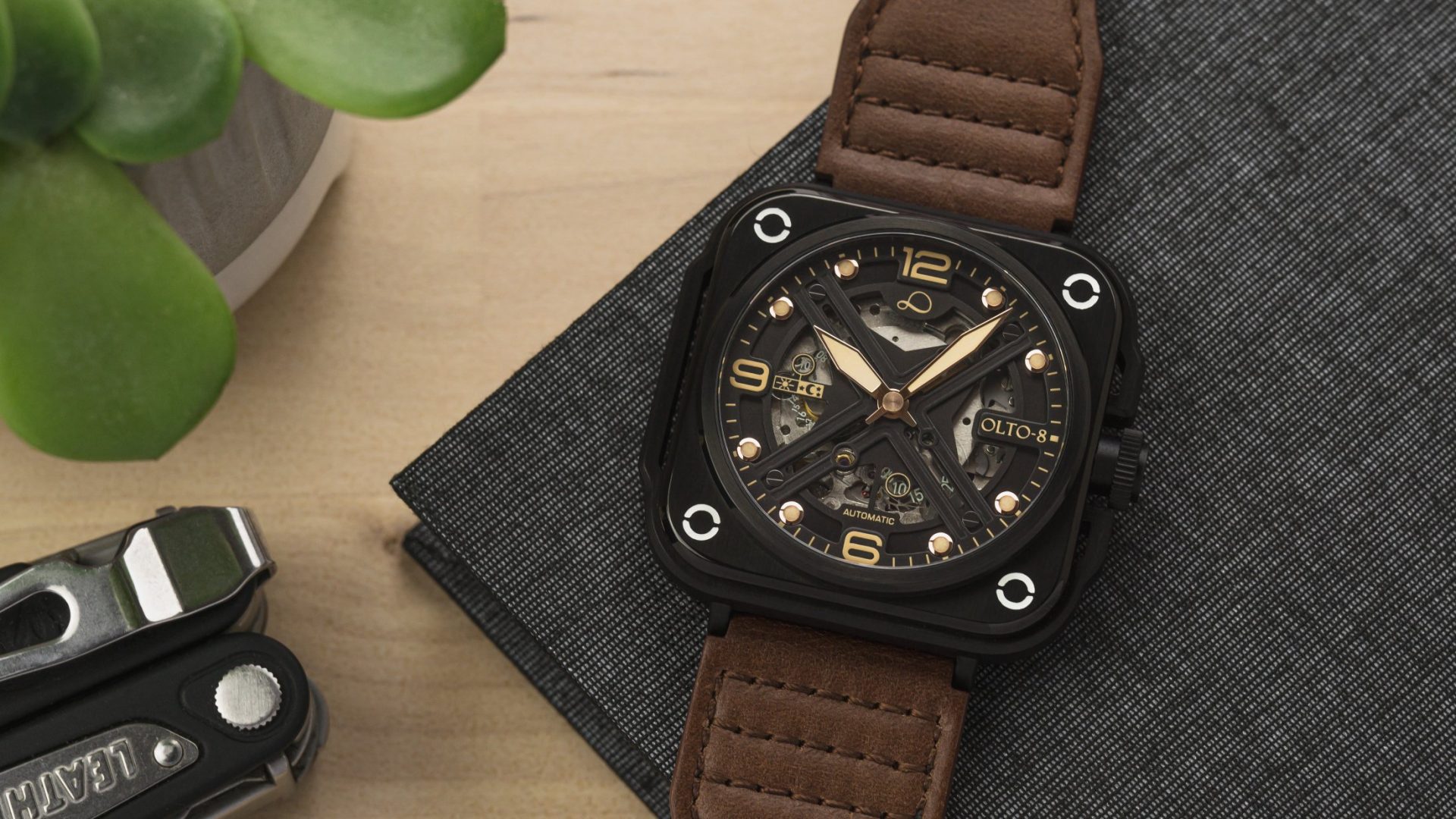 These days, I’m increasingly starting to feel as though the watches I see are all blending together. As a result, I tend to take a little more notice when something comes my way that strays off the beaten track. That’s definitely the case with the new Iron X from Olto-8. The brand is relatively young, having only started in 2020, but it’s already produced a couple of distinctly unique watches at affordable prices.

A couple of weeks ago they got in touch about their new Iron series, and yearning for something different to my usual watches, I agreed to take a look. The watches have just launched on Kickstarter, and are priced at a very reasonable $550 or $319 on pre-order.

The Iron X features a sapphire crystal, a dial applied with Super-LumiNova, and 50m water resistance. The movement is an automatic Miyota 82S7, which has 21 jewels and a 42-hour power reserve. All of which is pretty standard for an affordable field watch from a microbrand.

Of course, if you take one look at the Iron X you’ll see its design is anything but standard.

Pretty much every aspect of the Iron X breaks the mould. The design is supposedly influenced by the Jeep, and Olto-8 have sought to reference the vehicle with elements like the split circles at the corners of the case, and the X-shaped skeletonised dial. In all honesty, I don’t really see the connection between the two, and I think the Iron X can stand on its own without needing to shoehorn a reference to Jeep into the copy.

Putting the overblown marketing material to the side, what we do have is a pretty striking skeletonised watch. The square case is reminiscent of a Bell & Ross, and I think it’s pretty well finished. The brushing is very regular and there’s lots of curves and angles that make the case visually interesting. Square and rectangular cases can often be quite dull, and it’s nice to see that Olto-8 haven’t been lazy in this regard.

That said, as nice as the case is, it’s the dial that’s the talking point of the watch. It’s semi-skeletonised with multiple layers that add some fantastic depth to the watch. The dial is well-finished for this price point too, with just a few miniscule marks visible on the hands and markers.

It’s often the case that skeleton dials are difficult to read, but I’m pleased to say that that’s not the case here. Olto-8 made the smart decision to give the Iron X bold rose gold hands and markers that are easy to distinguish against the black dial.

The watch has two sub dials. The first is a running seconds dial located above 6 o’clock. The second is a 24-hour sundial next to 9 o’clock. Both operate by using a transparent disc to pass underneath a circular cut out. It’s an interesting idea but unfortunately both are a little hard to read, which makes them a bit redundant.

The Iron X is also a pretty impressive spectacle in the dark. When it came to applying the Super-LumiNova, Olto-8 chose to put it on everything from the hands and markers to the dial text. They even lumed the split circles on the case, which glow blue in contrast to the green lume on the dial. The overall effect is rather striking in the dark, and the lume lasts a reasonable amount of time thanks to the amount used on the hands and markers.

However, I don’t think Olto-8 should have bothered luming the dial text and minute track. The reason being that the print here is so fine they’ve clearly struggled to get an even application of Super-LumiNova, and it’s noticeably patchy in places. And, as they couldn’t get much on those areas anyway, it doesn’t glow that brightly either.

The case of the Iron X measures a pretty daunting 46mm across, but it actually wears surprisingly well thanks to a very short lug to lug of 43mm. Combined with a very reasonable thickness of 12.5mm, this makes the Iron X surprisingly wearable, even on dainty-wristed guys like me. Of course, it’s still pretty large, and it’s definitely a watch for people who want to wear something large. The watch comes on a brown leather strap, that’s pretty supple and very comfortable. I was pleased to see that it also has quick release spring bars for easy strap changes. The strap is of average quality overall, but it’s perfectly fine for a watch at this price point.

Olto-8’s Iron X is one of those watches that won’t have universal appeal. Its design is simply too far off the current industry trends for that. But that’s by no means a bad thing, because it’s doing something different at an affordable price point. For $550, or $319 on pre-order, you can get an interestingly designed watch with decent specs and build quality.

If you’re after a well-priced statement piece that’s got an original design, then I think the Iron X is a solid choice. It wears well on the wrist despite its size, and it’s also easy to tell the time on, despite the complexity of the design.

You can pre-order the Iron X from Olto-8’s Kickstarter page here.