Nth are the sister brand to Lew & Huey; another brain child of Chris Vail – whom is quite well known in the affordable and micro brand watch circles. I’ve reviewed a few Lew & Huey’s before, but I never really got on with the slightly playful branding. Nth, however, are much more serious and thus more appealing. I’ve not had too much time with the Amphion before I had to hand to over to the Facebook Divers Group GTG, but here are my thoughts on the watch.

The Amphion is quite obviously inspired by the Submariner; with the case being a rather pleasant nod to its classic styling.

It has a few little features – which takes what was already great and makes it more capable and suitable. For instance, something simple like drilled-through lugs are always handy to have; as they ensure easy strap changing.

A large, oversized crown with no crown-guards turns this element into a feature; especially when you check out the fact the the Nth logo engraved on the end is filled with lume. Such a simple thing that looks awesome – I’m surprised I’ve not seen it before (one of those “why didn’t I think of that” moments).

Whilst the majority of the case is brushed, there is a subtle polished top and bottom edging which provides clean lines and a variety of reflections.

The DLC-coated steel bezel insert is engraved with extraordinary accuracy, and all markings are filled with strong lume. I really like the flat triangle at 12 rather than a bulbous pip; and the full 60-minute marking is very welcome too.

The screw-in caseback is incredibly simple: small detailing in the centre and a polished outer rim.

The case also features a plethora of lume; not only all the bezel markings but also the engraved Nth logo in the crown. This is a feature that is on all Nth watches, and is such a simple but awesome addition which makes these watches stand out.

The dial is simple; with a retro inspired gold “gilt” theme running through: the hands, logo and hour markers are all in this colour. It’s a nice to see something a bit different to the usual steel you see so often on Submariner homages.

A rather well concealed date wheel is located between the 4 and 5 hour markers, which is a circle rather than square cut out of the dial. The wheel has a black base to it, allowing it to be camouflaged well.

The hands are a charming divergent to the usual mercedes hands used so much: a wide, stubby leaf shaped hour hand, and a thin sword minute hand coupled alongside a stick second hand with a lumed arrowhead tip.

The lume is extremely strong and evenly applied on the hands and hour markers.

The fully brushed bracelet (bar the polished sides) is smooth and very well put together. The links are secured with screw-in rather than straight up pins, which makes it easy to resize.

A double-locking buckle ensures the Amphion will never accidentally fall off the wrist. With the Nth logo engraved on the top bar and 3 sets of micro-adjustment, it’s practical too.

The Miyota 9015 is a movement that is found so often in microbrands. And rightly so; as it’s well known as being a very good and reliable affordable alternative to the Swiss automatics. It has all the specs you’d expect: 42 hour power reserve, hand winding and hacking seconds hand, and automatic winding. It’s a little on the plain side in terms of looks, but this doesn’t matter here as you can’t see it behind the full steel caseback. The accuracy is coming in at a respectable +9.0 seconds a day. 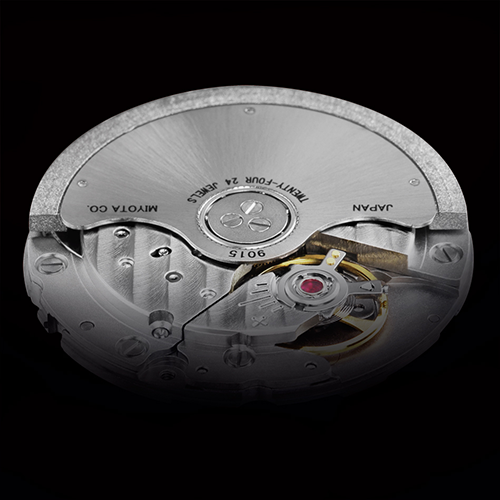 I’ll be the first to admit that $625 / £470 is on the higher end that I’d be willing to spend on a Miyota-powered micro brand, as for that kind of money you’d easily get a Swiss Made auto. But, I can say that the quality of the Nth Amphion is easily on par, if not better than those in the same price bracket. This almost makes the “Swiss Made” label just that – a label. One that if you don’t care too much about, then feel free to leave it – as just because a watch has that marking on doesn’t mean it’s a superior timepiece.

The Amphion has created quite the impression on me for the week that I had it; the fit and finish is remarkable and I just really love the design. The lumed logo in the crown is an addition that – whilst is rather pointless in a usability perspective – is such a cool feature it really impresses the thought that’s gone into the watch. It’s a sturdy, well-rounded timepiece that is sure to impress.