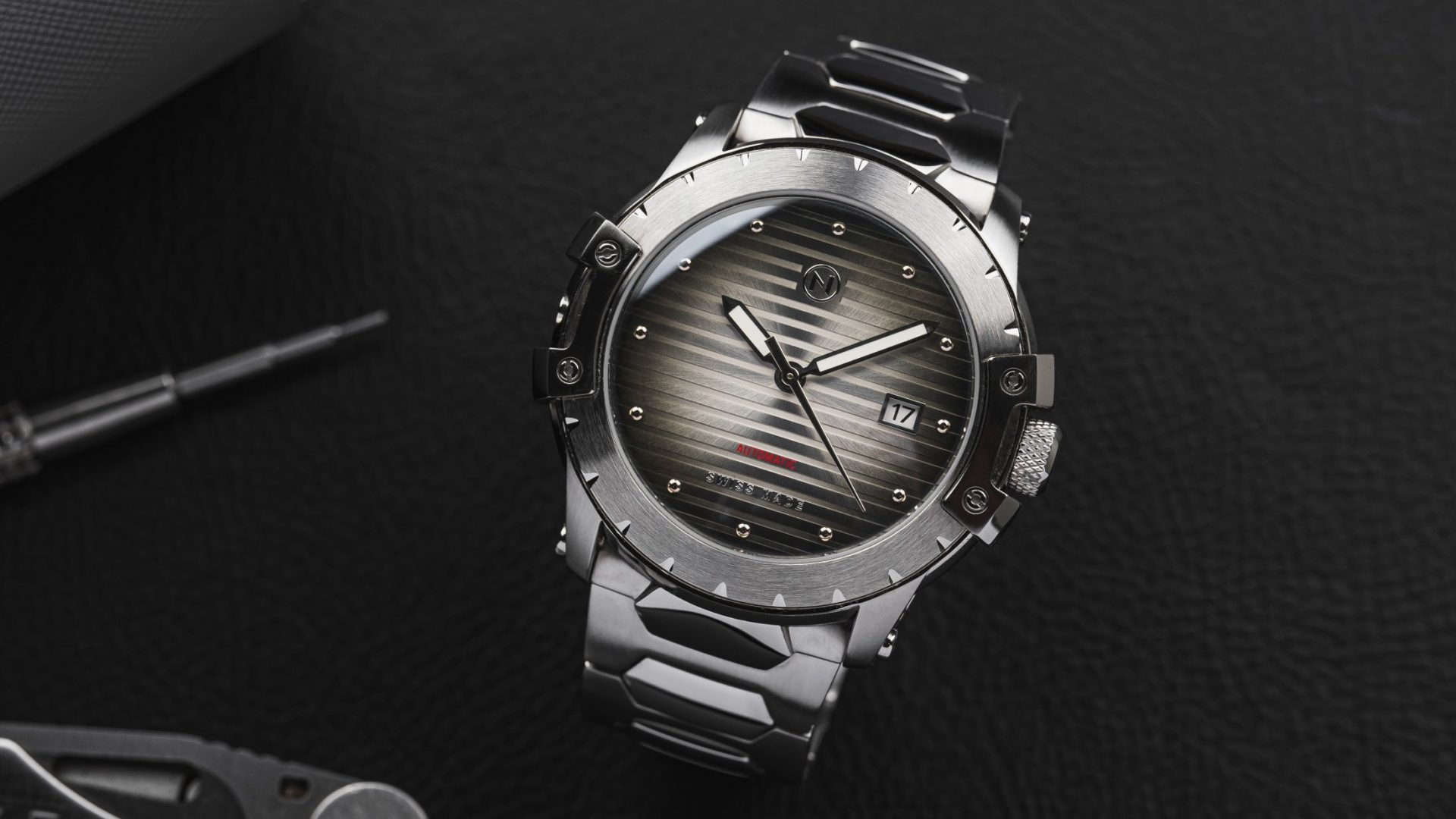 The Nove Modena – A Different Take On The Steel Sports Watch

Too often in this industry, I see brands playing it safe and producing watches that are just rehashes of other popular designs. Which is why I really respect those brands that go out on a limb and produce something that’s original. Nove is one such brand. It was founded in 2015 and produces a range of both quartz and mechanical watches with bold, unique designs. The specific model I’m reviewing today is a steel sports watch called the Modena, which retails for £576 or $670.

Aesthetically, the Nove Modena is certainly rather striking. I’ll be honest and say that it’s not my cup of tea, but it is an original design, and in Nove’s defence the build quality is rather good. I think that the dial in particular is rather well executed. It has a fumé grey sunburst finish that looks rather striking in the light, and the horizontal lines cut into its surface break the surface up nicely.

The Modena has no minute track, and the hour markers are small polished dots. I get why Nove went with such a minimalist design as the case is so complex, but I’d have liked to have seen them use bigger lumed hour markers. The reason being that the dots are rather small, and as a result, there’s a lot of negative space on the dial.

The polished handset is simple, clean, and legible. They’re pretty well finished and I like that they’re bevelled as it adds a bit of detail to the Modena’s dial. The hands are of course lumed and though it isn’t super bright, there’s enough there that the hands are readable in the dark.

All this sits beneath a double-domed sapphire crystal that’s got both anti-reflective and anti-smudge coatings. And, one really nice bit of attention to detail is how perfectly the curve of the sapphire matches the angle of the bezel, to create one seamless curve.

Unusually, the Modena also has a domed sapphire crystal on its display case back. When I first saw it I was worried that it would make the watch sit awkwardly on the wrist, but I needn’t have been concerned. I don’t really notice the crystal when wearing the watch and I actually quite like the effect of using a domed crystal on the display case back.

How The Modena Feels On The Wrist

This now brings me on to the comfort and wearability of the watch. When I first got the watch I was worried that it would be too big for me, as the case measures a sizeable 44mm in diameter. However, the lug-to-lug of the Modena is only 46mm, so whilst it’s still a large watch, it’s not too big for my wrist. It’s also only 12.5mm thick, including the crystals, so it sits rather nicely on the wrist.

As to the case’s design, it’s unusual, to say the least. It seems to be a multi-piece construction where the lugs, bezel, and crown guard all screw onto the case. Along with a combination of brushed and polished surfaces, this results in quite a complex-looking design. On a functional level, the case uses a screw-down crown and has 200m of water resistance, which makes the Modena a watch you can take virtually anywhere.

When it comes to the H-link bracelet, the links themselves feel well-made for the price point, and the bracelet feels comfortable. However, it does have a big flaw which is the butterfly clasp. It’s not that it’s a bad quality clasp, it’s just that by design it has no micro-adjustment, so it’s very hard to get the right fit. For example, I had to wear this one a little loose. The links are held in place by split pins, and though I’d prefer screws, pins are what I expect on a watch at this price point.

To make it tick, the Nove Modena uses a Ronda R150 automatic movement, which is a calibre you don’t often see. Indeed, this is the first time I’ve gotten hands-on with a watch that uses the movement, and it seems pretty solid. The specifications are all pretty standard for a Swiss-made movement, and the R150 has 25 jewels, a 4Hz beat rate, and a 40-hour power reserve. The movement also has bidirectional winding, a hacking seconds hand, and Incabloc shock protection.

As to the movement’s accuracy, Ronda state that on average the R150 should be accurate to within +/-12 seconds a day, with a maximum deviation of 30 seconds a day, which isn’t bad for a base calibre. In fact, from what I’ve experienced with the Modena, the R150 seems like a good alternative to the more mainstream movements from ETA and Sellita.

All in all, the Nove Modena is a well-made watch that’s priced very reasonably for its specifications. The specifications are spot on for a steel sports watch, and I think that the R150 is a good choice of movement that seems to be a notch above the alternative Japanese options. It’s just a pity that the clasp has no micro-adjustment and that you can put the watch on another strap.

But apart from those two points, there’s not much to objectively criticise about the watch, and the Nove Modena will be a good pick for anyone after an affordable steel sports watch that’s visually rather different from the usual choices.

You can read more about the Modena on Nove’s website here.