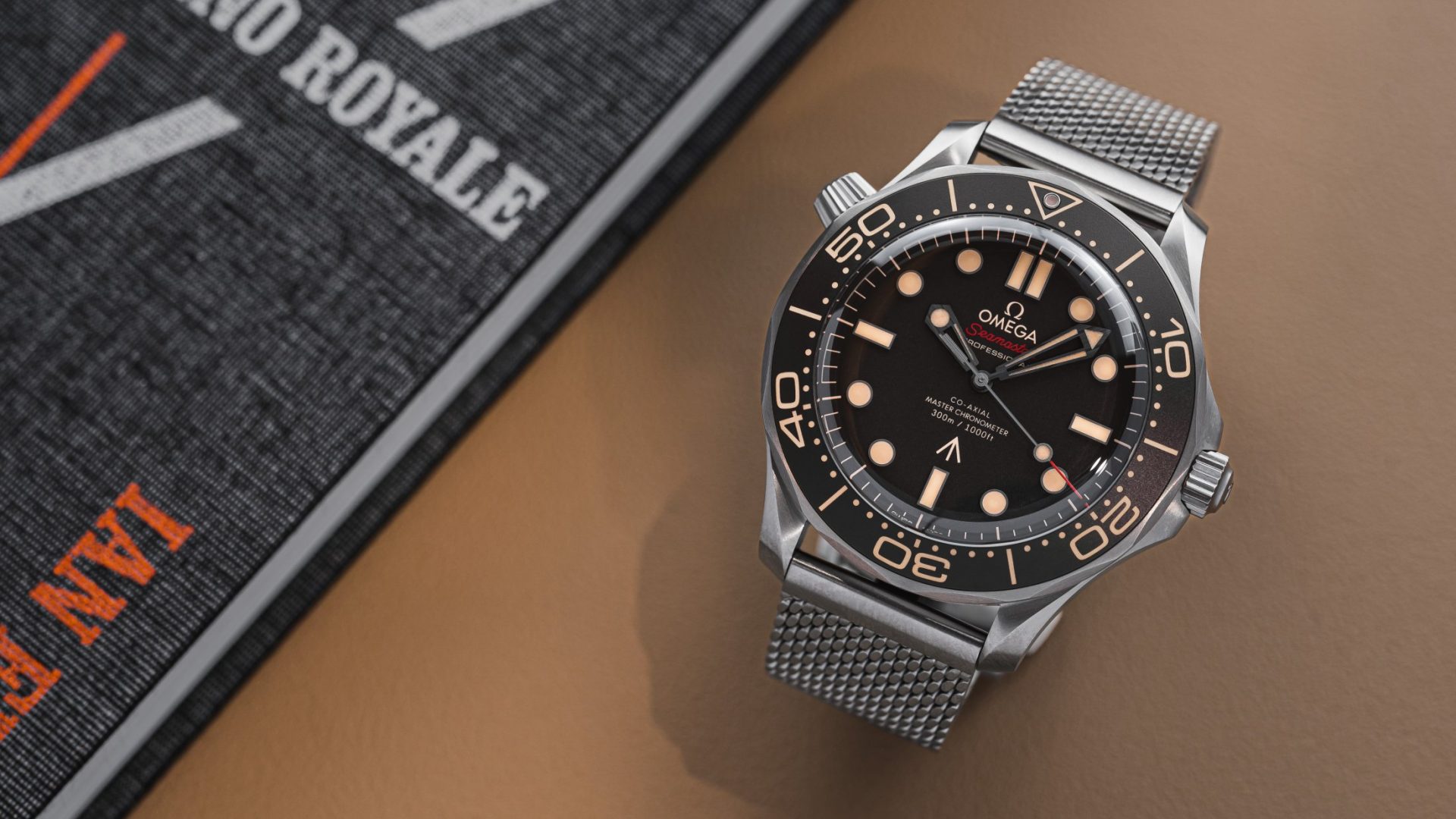 With each new Bond film comes a new Omega strapped to 007’s wrist. For No Time To Die Omega released a titanium version of the Seamaster Diver 300m. Daniel Craig himself supposedly had input on the design, which was based on the idea of making a watch that’s actually suitable for the world’s most sophisticated secret agent to take into the field.

Whilst the notion that a watch that retails for £8,600 would ever be the first choice for an MI6 agent is somewhat laughable, the No Time To Die Seamaster does incorporate many features that make it an excellent everyday tool watch.

Specifications Of The Omega Seamaster 007 Edition

As befits a spy watch, the No Time To Die Seamaster looks every inch the tool watch. Unlike the standard Seamaster Diver 300m, the watch has no shiny surfaces whatsoever. The titanium case is completely brushed, and the bezel insert is aluminium with a matte finish. The dial is also matte and the markers and hands aren’t polished either. Both the dial and bezel are actually deep brown, rather than black, and whilst that might sound odd, it’s a very subtle colour that simply accentuates the warmth of the creamy lume.

The lack of reflective surfaces is just what any spy wants. Even though I’m not a super-spy, I appreciate the functional aesthetic of the watch, and it’ll tick a lot of boxes for anyone after a watch with a strong military vibe.

The Seamaster’s case back is pretty simple. Like the dial, it features the broad arrow symbol, along with a series of numbers that mimic those found on genuine British military watches. It’s a simple design, but again it’s in keeping with the concept behind the watch.

The Seamaster has a healthy 300m of water resistance, which is plenty for a watch like this that’s marketed as a capable “go anywhere, do anything” piece. However, on that note, I find Omega’s choice of an aluminium bezel insert disappointing. They could easily have used a matte ceramic insert that would have been far more scratch resistant and not compromised the watch’s aesthetics.

How Legible Is The Omega Seamaster 007 Edition?

The matte look, combined with the chunky hour markers, makes for a very legible dial. The overall design is very clean, and the red-tipped seconds hand and “Seamaster” text really pop against the brown and beige of the watch. I have just one small quibble, which is that the skeleton hands aren’t as legible as they would be if they were solid.

Just above the six o’clock marker, Omega added a broad arrow mark – something traditionally used to denote the property of the Ministry of Defense. But here it serves simply as a small nod to Bond’s rank of commander in the Royal Navy.

To help give the watch something of a vintage look, Omega gave the 007 Edition Seamaster a domed sapphire crystal. It definitely helps make the watch look a bit retro, but I don’t think everyone will like the number of reflections that the curved edge picks up. On the flip side, the crystal doesn’t pick up much glare thanks to an anti-reflective coating on the underside.

The lume on the No Time To Die Seamaster is really good, and the dial and bezel are easy to see in the dark. Omega has also made the minute hand glow green so that it stands out against the blue glow of the other lume. It’s a small attention to detail that demonstrates that this isn’t just a dive watch for show.

How The Watch Wears

When it comes to how the watch feels on the wrist, I think that the Seamaster is surprisingly well-proportioned, despite its 42mm case size. And, as the case and bracelet are made from grade 2 titanium, the watch is incredibly light. For a tool watch, this is just what you want, and I could easily forget that the watch is even on my wrist.

Somewhat unusually, the watch comes on a mesh strap, which makes for a refreshing change from the solid metal bracelets usually put on dive watches. It’s a look that I think definitely works, and the bracelet itself is very well made. The foldover clasp feels very secure, and it’s far nicer than the clasps seen on cheap mesh bracelets.

The only negative thing I have to say about the mesh bracelet is that as the excess tail of the strap is passed under the bracelet, it can make the watch feel a bit awkward on the wrist. Though, if that’s something that really does annoy you, the Seamaster is also available on a NATO strap, which knocks a whole £1,000 off the retail price.

Like a lot of people, I’m not the biggest fan of the helium escape valve at 10 o’clock. It throws off the balance of the watch’s design, and it’s also really not that useful for the vast majority of people. However, it doesn’t get in the way, and it doesn’t bother me enough to put me off the watch as a whole.

Inside the No Time To Die Seamaster is Omega’s Calibre 8806. This 35-jewel automatic movement has a 55-hour power reserve and is resistant to magnetic fields reaching 15,000 gauss. It’s also a METAS-certified Master Chronometer, so it will be accurate between 0/+5 seconds a day. It’s a robust movement and its specifications speak for themselves. Sure, this watch may be pretty expensive, but you get a lot of technical sophistication for your money.

However, pricing aside, I think the No Time To Die Seamaster is a well-designed watch. You can see how Omega has taken that idea and ran with it. The elimination of any reflective surfaces, the oversized lume plots, and the lightweight construction are all very much on point for a military-themed watch like this one.

So whilst this is a watch made as a film collaboration, it really doesn’t feel like one. And that’s what sells this watch for me. It doesn’t shout that it’s a Bond watch, and I admire that restraint from Omega.

You can read more about the Omega Seamaster Diver 300m 007 Edition on Omega’s website here.