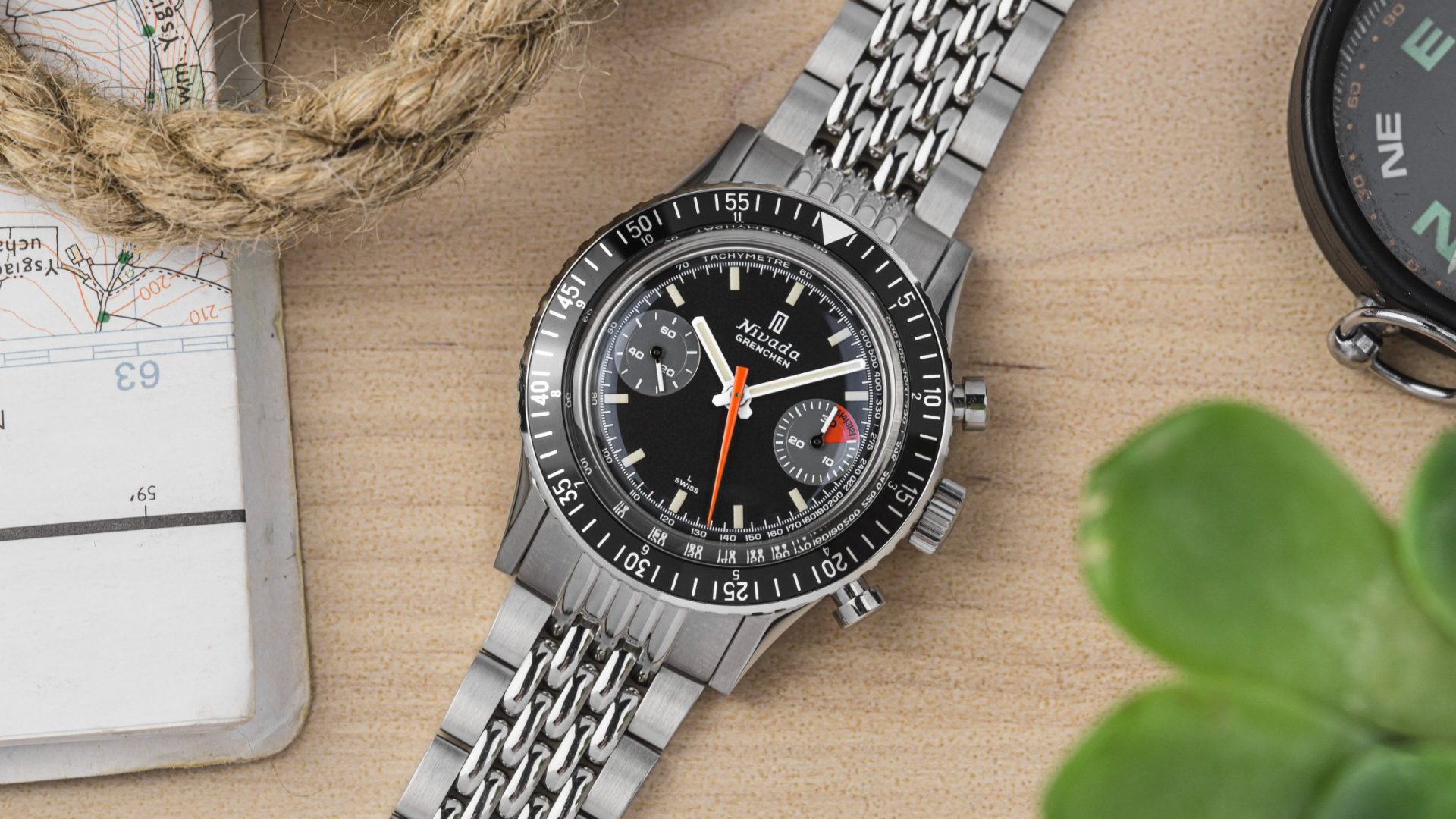 The Quartz Crisis of the 1970s sounded the death knell for a lot of iconic Swiss brands that had produced some fantastic watches. One such company was Nivada Grenchen, a brand that had existed since 1926, and produced a wide range of distinctly cool tool watches. The company even supplied timepieces to the U.S. Navy for their expedition to Antarctica (Operation Deep Freeze) in 1955-56.

For me, Nivada Grenchen’s demise was one of the great losses of the Quartz Crisis. Which is why I was absolutely thrilled when the brand was revived back in 2018. Whilst I’m not aware of any connection to the original brand besides the name, the new Nivada Grenchen understands the importance of making use of the heritage of that name.

As such, its models are all near-exact reissues of classic Nivada Grenchen watches. One of my favourites is the Chronomaster Aviator Sea Diver, which is available in a mind-boggling array of dial options, and with the choice of either a manual or automatic movement. So when Nivada got in touch to offer me a watch in exchange for reviewing it, I had a hard time choosing which to go for!

In the end, I opted for the Orange Boy “SL” with a manual-wind movement on a beads of rice bracelet, the retail price for which is CHF1,795. This translates to approximately £1,481 or $,1843 at the time of writing.

As I mentioned earlier, the watch is a near-exact reissue of the original Nivada Chronomaster, which includes the case being the same 38mm size as the original. This is considered small for modern chronographs, but it’s a key reason the Chronomaster feels like an authentically vintage watch. The bezel is actually slightly wider than the case too, which adds another millimetre to the size. The lug-to-lug is a pretty reasonable 46.5mm, which means the watch doesn’t feel tiny on the wrist. However, it’s still not a big watch, and if you’ve got large wrists you might find the Chronomaster a bit small for you.

The reason I chose the manual wind version is because it’s just over a millimetre thinner than the automatic Chronomaster, and it measures a very reasonable 13.8mm including the crystal. A lot of brands insist on making their mechanical chronographs automatic, which makes them very thick, so I’m pleased to see Nivada offering both options.

The beads of rice bracelet is pretty comfortable, and it helps reinforce the Chronomaster’s vintage look. The links are held in place by screws, which makes the bracelet easy to size, though they still feature the directional arrows for pins. This caused me some confusion when I initially got the watch, and it took me a while to realise why the pins weren’t coming out.

The clasp is just a simple pressed foldover type, and whilst it’s period-correct, I would have preferred to see a more modern (and higher quality) clasp instead. However, this is a small gripe in the grand scheme of things, and it really doesn’t diminish my overall love of the watch. The lugs are also drilled, which allows you to swap out the strap with ease, should you get bored of the bracelet.

A Look At The Dial

The dial sits beneath a domed sapphire crystal that matches the aesthetics of the acrylic used on the original, whilst offering vastly improved scratch resistance. The dial itself is clean and uncluttered, which makes it very easy to read. In fact, its simplicity hides the multitude of functions built into the watch that gives it its convoluted name.

Firstly, there’s the chronograph, which can track up to thirty minutes using the bright orange central seconds hand and the sub-dial at three o’clock, the sub-dial at nine counting the running seconds. This is complemented by a tachymeter scale on the outside of the dial, and the minute track which has hash marks for fifths of a second. The sub-dial also has an eye-catching red segment to count down the first five minutes. It’s a feature that was originally designed for yachting, but which is somewhat redundant today.

The bezel is a bidirectional friction bezel that rotates smoothly in either direction. Its aluminium insert features full 60-minute hash marks for tracking elapsed time up to an hour, as well as a small 12-hour scale for tracking a second time zone. The 12-hour scale isn’t the easiest to read, but it’s there should you need it.

All this is complemented by a 100m depth rating that allows you to swim and snorkel with the Chronomaster, and a lumed dial and handset for legibility in the dark. The lume isn’t the brightest, but it should be adequate for daily wear.

When it comes to chronograph movements, the vast majority of watch enthusiasts prefer to see a watch using a mechanical movement, rather than a quartz one. The problem with this is that a mechanical chronograph can be quite expensive, and most affordable ones are powered by Chinese-made Seagull movements.

For the Chronomaster Nivada chose to use the Sellita SW510 BH b. As I’ve said before, this calibre comes in both an automatic and a manual variation and features 27 jewels, a 4Hz beat rate, and a 48-hour power reserve. All of which makes the SW510 a solid choice of movement. Given that the Chronomaster costs just under £1,500 I think the use of a Sellita movement makes it a bargain for the price.

In my opinion, the Nivada Grenchen Chronomaster is a near-perfect reissue of one of the most beautiful watches of the era. Nivada made the right decision by being as faithful to the original as they could, as the Chronomaster feels just like a 1960s watch that’s come straight from the factory.

And at just under £1,500 for a mechanical Swiss chronograph, the Chronomaster also makes for a tempting value proposition. It’s got a decent set of specifications and wears extremely well on the wrist. That said, I’m sure many people would want to see the watch made a little bigger to account for modern tastes. However, I’m glad that Nivada resisted the temptation to do that, as it would have robbed the Chronomaster of what makes it so incredibly appealing to fans of vintage watches in the first place. This is a watch that knows exactly what it’s trying to be, and it doesn’t make any compromises in order to attract those who want something different.

You can purchase the Chronomaster from Nivada Grenchen’s website here.

Plus, you can use the code 12and60#strap to get one free strap when you purchase a watch. Just add your strap and watch to the cart first, and then enter the code at the checkout page to get the discount.