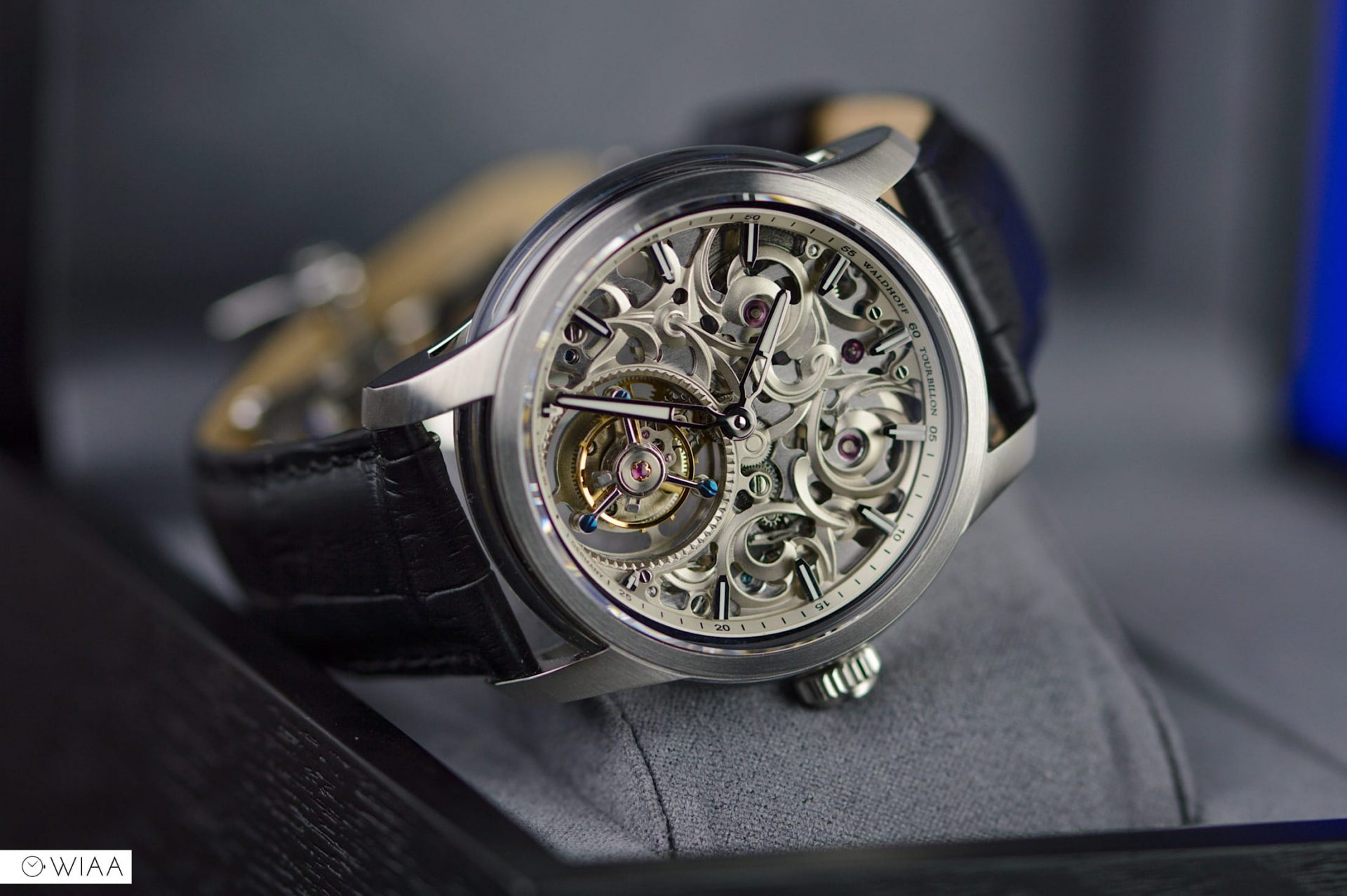 Waldhoff is a fairly new brand to me, and indeed they only started in 2015. Declining to stick to the simple stuff early on, Manufaktur Waldoff’s stated goal is “to create extraordinary mechanical timepieces, entirely assembled and calibrated by hand, in-house, in our own workshop”. Today, I’m looking at one of those extraordinary timepieces – the Imperial Diamond Silver.

Like most watch enthusiasts, I can’t fail to immediately notice that tourbillon.

As complications go, the tourbillon may not be the most difficult to produce, or the most expensive, or even the most useful, but it remains a highly desirable one. When Arbraham-Louis Breguet created the first one in 1795 he solved a very real problem. A watch resting in the same upright position all day long in your waistcoat pocket would be subject to the effects of gravity on the escapement and balance wheel, leading to deviations in the time-keeping. Inside a tourbillon cage, the entire escapement and balance wheel rotate about their axis to ensure all vertical positions are experienced equally. While Haute Horlogerie watchmakers have added a second and even third axes to the tourbillon, its usefulness waned the moment we started to wear watches on our wrists. Our natural daily movements abate the problems that the tourbillon was necessary to solve.

The tourbillon remains an expensive complication though, with the cheapest Swiss offerings starting well in excess of £10,000 so it’s no surprise to see that any affordable tourbillon watch is going to house a Chinese calibre. The Hangzou 3452 is a manual winding, twin-barrel movement which should be good for 80 hours of power reserve on a full wind (I didn’t specifically test this, but know that it was still ticking away 72 hours later) and beats at 28,800 bph. Determining accuracy is a little trickier though, but over the course of 7 days I was able to report the watch had gained less than 30 seconds in total which is plenty good enough for me.

Aside from the tourbillon, the rest of the skeletonised movement is impressively decorated, with the rear of the watch almost as nice as the front.

I’m not always the biggest fan of skeleton watches as the ability to tell the time is often compromised and the watch becomes more a piece of artistry than a functional tool. Legibility is certainly compromised in the case of the Waldhoff Imperial Diamond Silver here, but the distinction of the hands above the swirling patterns of the movement are a lot more pronounced in person than can be appreciated in photographs.

The hands and stick indices are certainly legible in low light when the SuperLuminova glows. The combination of glowing green lume, which appears to applied to the underside of the hands too, and the shadowed patterns of the dial are especially pleasing.

My first impressions of the case were primarily related to its size. At 43mm in diameter and just under 50mm lug to lug it is perhaps slightly bigger than I would like, but then again it’s a bold looking watch. The 14mm thickness of the watch is very noticeable though, especially on the wrist.

It’s only when taking the time to study the case construction than I began to really appreciate it. The top section of the stainless steel frame is surrounded by a slightly bulbous sapphire barrel, with the interestingly shaped lugs arching down to meet the bottom section at the lug tips where they are screwed in place. There are many ways to try to hide the height of a watch, but this idea of encasing it in sapphire to make a feature of it is a new one on me.

The Waldhoff comes on a black calf leather strap with deployant clasp and quick release spring bars. It’s comfortable enough but the very formal look isn’t necessarily to my taste, and a more colourful strap would potentially draw attention away from the watch itself. A tourbillon watch with a skeletonised dial in a sapphire case is going to be a statement piece, and maybe it’s best for the strap to sit quietly in the background.

Although time-telling isn’t difficult, it’s no surprise that a quick glance usually turns into a more lingering look to appreciate the movement. The price of $2,230 (or roughly £1,700 at the time of writing) is more than I’d usually like to spend on a ‘statement’ or ‘conversation’ piece, but as far as tourbillons go you’d be part pressed to find one with as much going on for less money.