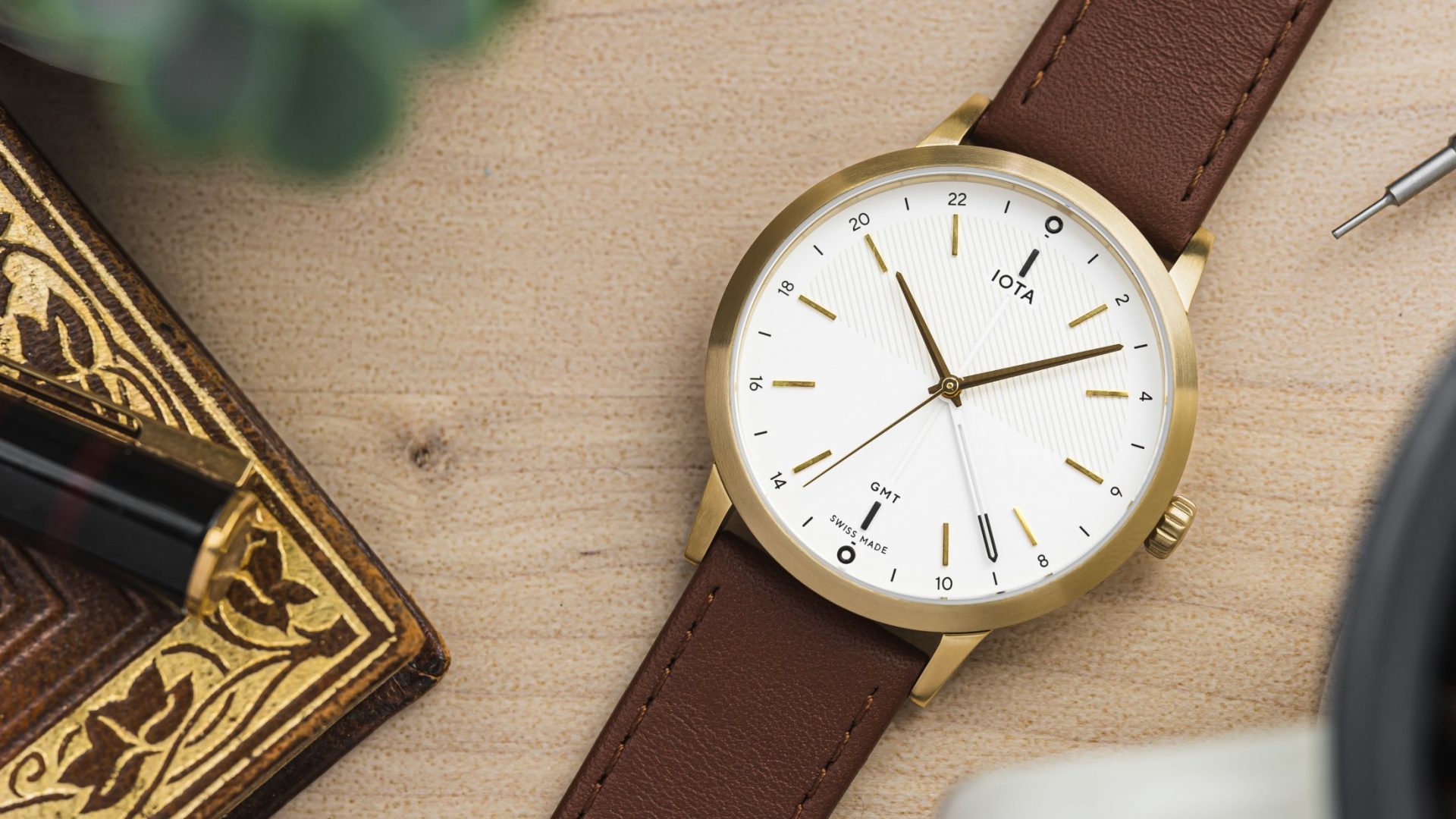 It’s a tricky thing to design a minimalist watch. And that’s because the fewer elements there are in a design, the harder it is to make them interesting and original. In fact, it’s more likely that a minimalist design will look cheap and boring. But I think that the watches I’m looking at today manage to pull it off rather well. They’re the GMT collection from Iota, a microbrand that combines British design and Swiss manufacturing.

There are four different models in the collection, each named after a different capital city. There’s the white-dialled London, the blue-dialled Sydney, and the New York, which has a white dial and gold-coloured steel case. There is also a fourth model which is an all-black special edition called the Hong Kong.

On paper, these GMTs have some pretty standard specifications, with a flat sapphire crystal that has an anti-reflective coating on each side, 50m of water resistance, and a quartz movement. I can already hear the disapproval from those who would prefer a mechanical movement to a quartz one, but the fact is that quartz is the more practical choice out of the two options. And, given that the Iota GMT is just £265, I think that a quartz movement is a perfectly fine choice for a watch at this price point. The movement in question is the Ronda 515.24H, a 1-jewel Swiss movement with a 45-month battery life and an accuracy of -10/+20 seconds per month.

The dial that sits above the quartz movement is an excellent example of how to design a minimalist watch. It’s simple and easy to read and has some nice design elements that separate it from poor-quality minimalist watches. The hour markers are simple batons, and on the London and New York models, these have polished surfaces that catch the light rather nicely. Meanwhile, on the Sydney, they are painted a light grey that contrasts with the rich blue dial. To break up the uniform ring of markers, the ones at twelve and six o’clock are shorter, and either black or white depending on the model. They also have an “O” at their tips that further helps to break up the dial, and together with a debossed line running down the centre of the dial, they create the illusion of two waypoints joined by a line.

Around the hour markers is printed a simple 24-hour scale for use with the GMT hand. And, though it is pretty plain, there’s nothing wrong with that because it means that it’s easy to read and use.

The last element to the dial is that the top half is printed with diagonal lines. These create a subtle shading effect across the dial that’s somewhat reminiscent of the bi-colour bezels seen on other GMT watches. It’s a subtle touch, but one that gives the Iota GMT a more distinctive look than it would otherwise have.

The hour, minute and seconds hands on the Iota GMT are clean and uncomplicated sticks, with polished surfaces. The hour and minute hands are also bevelled, and this helps to make the hands appear more sophisticated than they would if they were simply flat. However, it’s here that we come across the only two negative things I have to say about the dial. The first is that the hands could be better finished. Though they look fine when I glance down at any of the watches on my wrist, up close I can see that they have marks across the polished surfaces. The second negative is that seconds hands on all three samples also don’t hit square on the hour marks, but fortunately, as there is no minute track, this isn’t too noticeable. It’s a shame because these two points are the only flaws I can see on any of the watches, but at this price point, it’s hardly the end of the world.

Meanwhile, the GMT hand is skeletonised and coloured to blend in with the dial, with the exception of the tip, which is either black or white so that it’s easy to pick out against the dial. By having only the tip contrasting with the dial, it prevents the GMT hand from cluttering up the face, whilst not impacting the usability of the GMT function.

Individually each element might not seem like much but brought together they make for an attractive cohesive design.

In keeping with the simple dial, the case of the Iota GMT is equally straightforward. The finish varies between each model, with the Sydney’s case being almost entirely polished apart from the tops of the lugs. Meanwhile, the New York’s and London’s cases are almost entirely brushed, other than the sides of the bezel. It’s down to you which you prefer, but the finishing is pretty good and the case slopes inwards which stops it from being overly simple.

The case measures 40mm across, with a 46mm lug length, and it’s just 8.5mm thick. With these dimensions, the Iota GMTs are very wearable, and they can easily slip under a shirt cuff.

I must admit that I was pleasantly surprised by the quality of the leather straps the GMTs come on. They’re made from Italian Nappa leather and are noticeably nicer than the leather straps you usually see on watches of this price point. They’re very soft to the touch and are quite supple despite also being nice and thick too. As a finishing touch, they come with quick-release spring bars so that you can change them out with ease.

Now, I know that we watch enthusiasts can often be quite dismissive of quartz watches. After all, more often than not they’re overpriced watches designed to appeal to the general consumer. However, with these GMTs Iota reminds us that we shouldn’t dismiss quartz watches outright. Because these watches show that with a bit of care and attention to detail, it’s possible for a brand to offer a well-designed and well-built quartz watch at a reasonable price.

You can read more about the GMT collection on Iota’s website here.