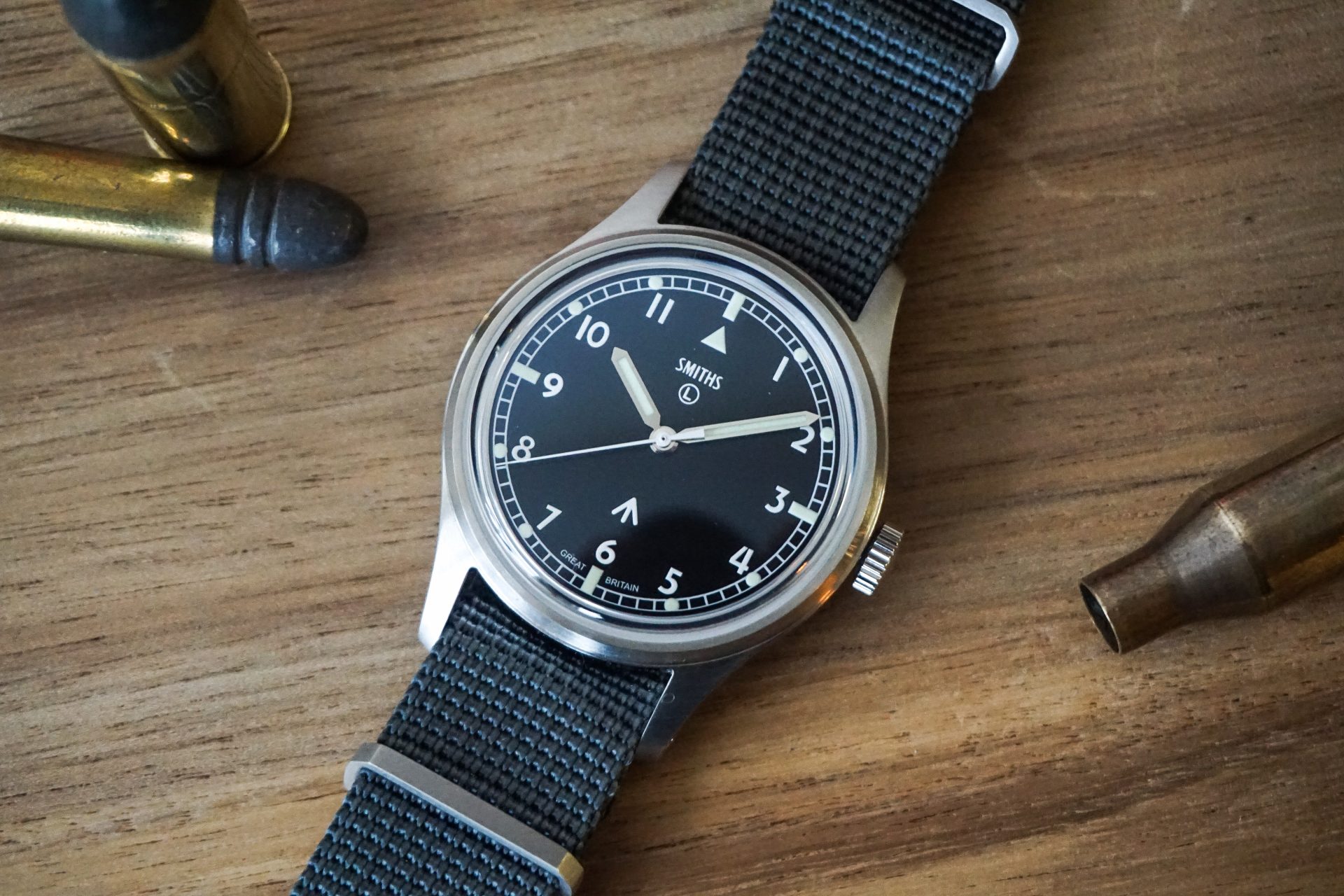 As I’m sure I’ve mentioned before, vintage military watches are hot as hell right now amongst collectors. Prices on genuine military pieces are rocketing up faster than a Polaris missile. With this popularity comes a high demand for homage pieces of rare and expensive models beyond the reach of us mere mortals.

One such piece is the Timefactors Smiths PRS29, which was initially a homage to the famed Smiths W10 used by the British Ministry of Defence. It’s a watch I’ve had my eye on for a while, but never quite pulled the trigger on. Then, when I saw that Eddie had revamped the PRS-29, and brought out a new dial option, I thought it was the perfect time to ask to review the new versions. Eddie was kind enough to send me one of each variant to look at and review. 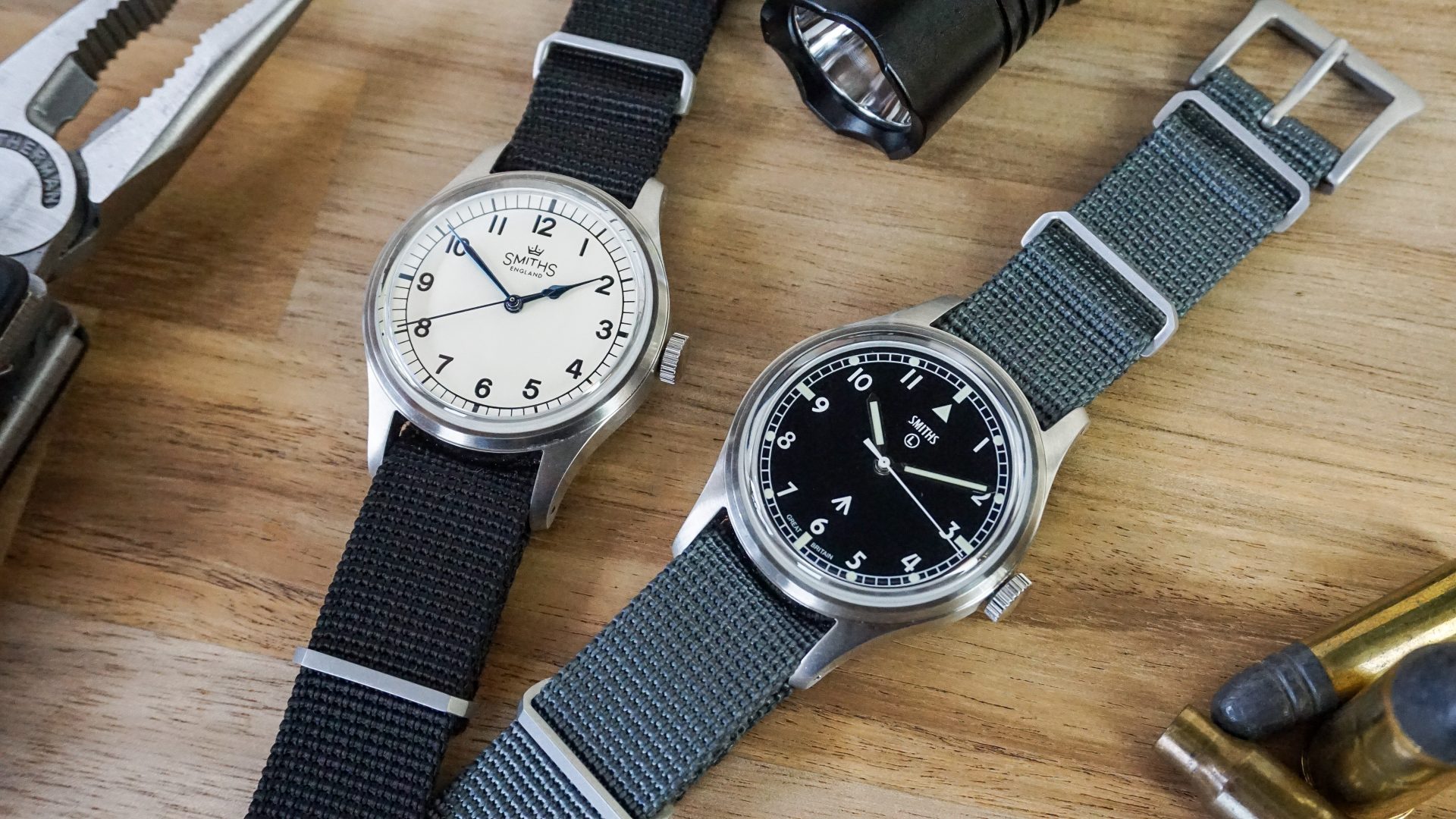 For those readers who haven’t come across Timefactors before, it’s a microbrand based in the UK and owned by a gentleman named Eddie Platts. Eddie founded the company in 1996, which probably makes Timefactors one of the oldest micros in the world. He’s purchased the rights to several defunct watch brand names and now markets vintage inspired watches under names such as Smiths and Precista.

The Timefactors PRS-29 is a watch I’ve always admired for the simple fact that it offers people exactly what they want, which is a near exact reissue of the original Smiths W10. Too often a brand brings out a homage or reissue to a vintage piece, but feels the need to needlessly update the design, be it increasing the case size or cramming in a date window.

The old version of the PRS29 was based solely on the Smiths W10 wristwatch and was available in 36mm or 39mm, for those with more modern tastes. However the updated Smiths PRS29 is only available in a 36mm case size, but offers two dial choices- one based on the W10 (the PRS29-A), and the other on the watches the Air Ministry commissioned in the 1940’s to Specification 6B/159. Apart from the dial and handset, both models are identical. 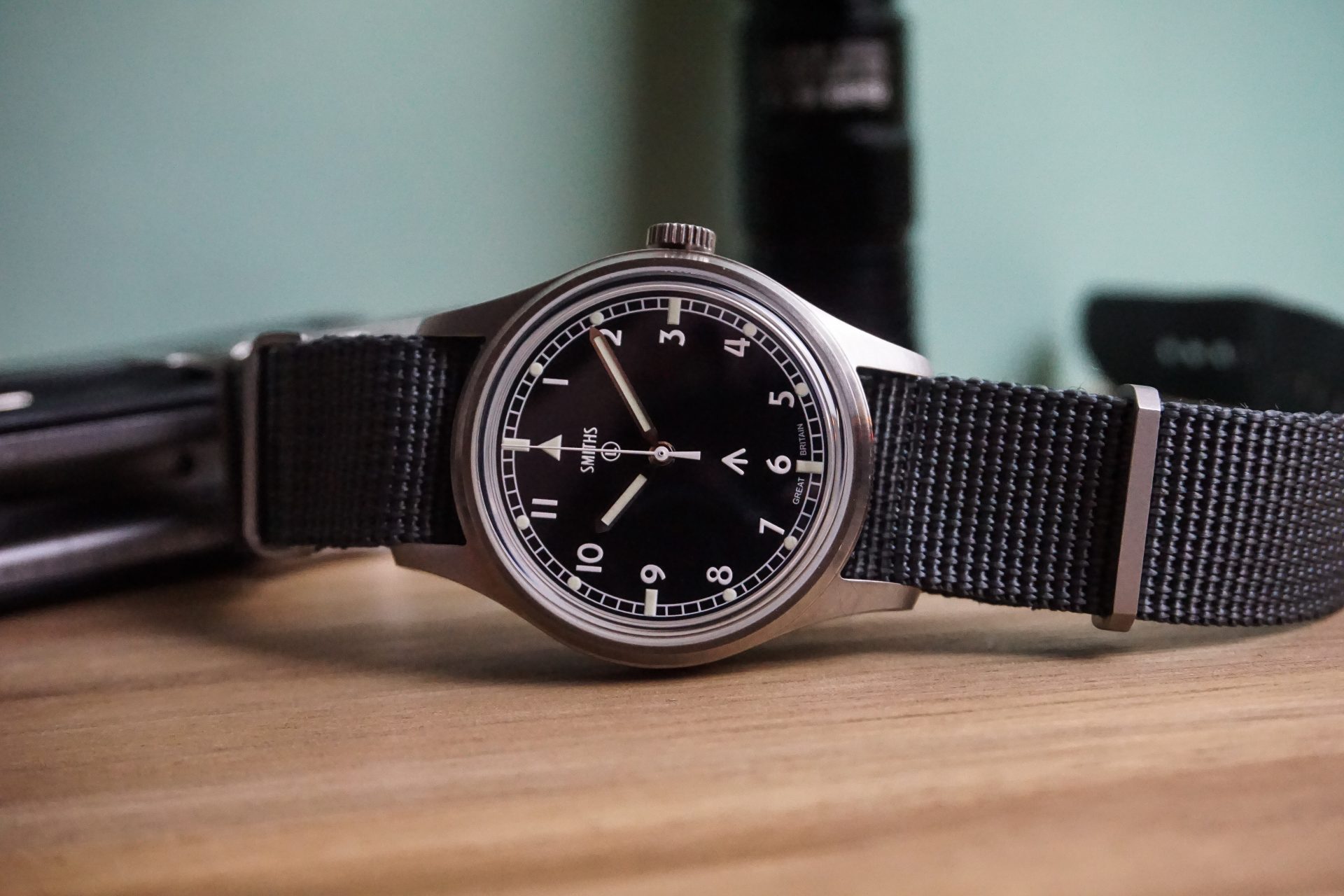 The dial of the Timefactors PRS29 is about as close to the original Smiths W10 as it gets!

The case is virtually identical in shape to that of the original W10. At 36mm it’s a hair bigger than the original (which was 35mm), but still small for a modern watch. The lug to lug is 46.8mm, which helps the watch to wear bigger than you would think. The choice of keeping the watch at an authentic size is the right one, in my opinion. It helps the piece keep the vintage character and authenticity of the original.

The finish is completely brushed, and is flawlessly executed, providing a smooth satin sheen that oozes both functionality and formality. The edges are uber sharp too, and it’s great to see such great finishing on a microbrand at this price point.

The screw-in caseback has no decoration, as you’d expect from any decent homage/reissue to a military piece. It simply states the usual specs you might expect to see, along with each watch’s serial number and NATO stock number. The case has a water resistance of 100 meters, which is more than enough for day-to-day wear for a field watch of this type. 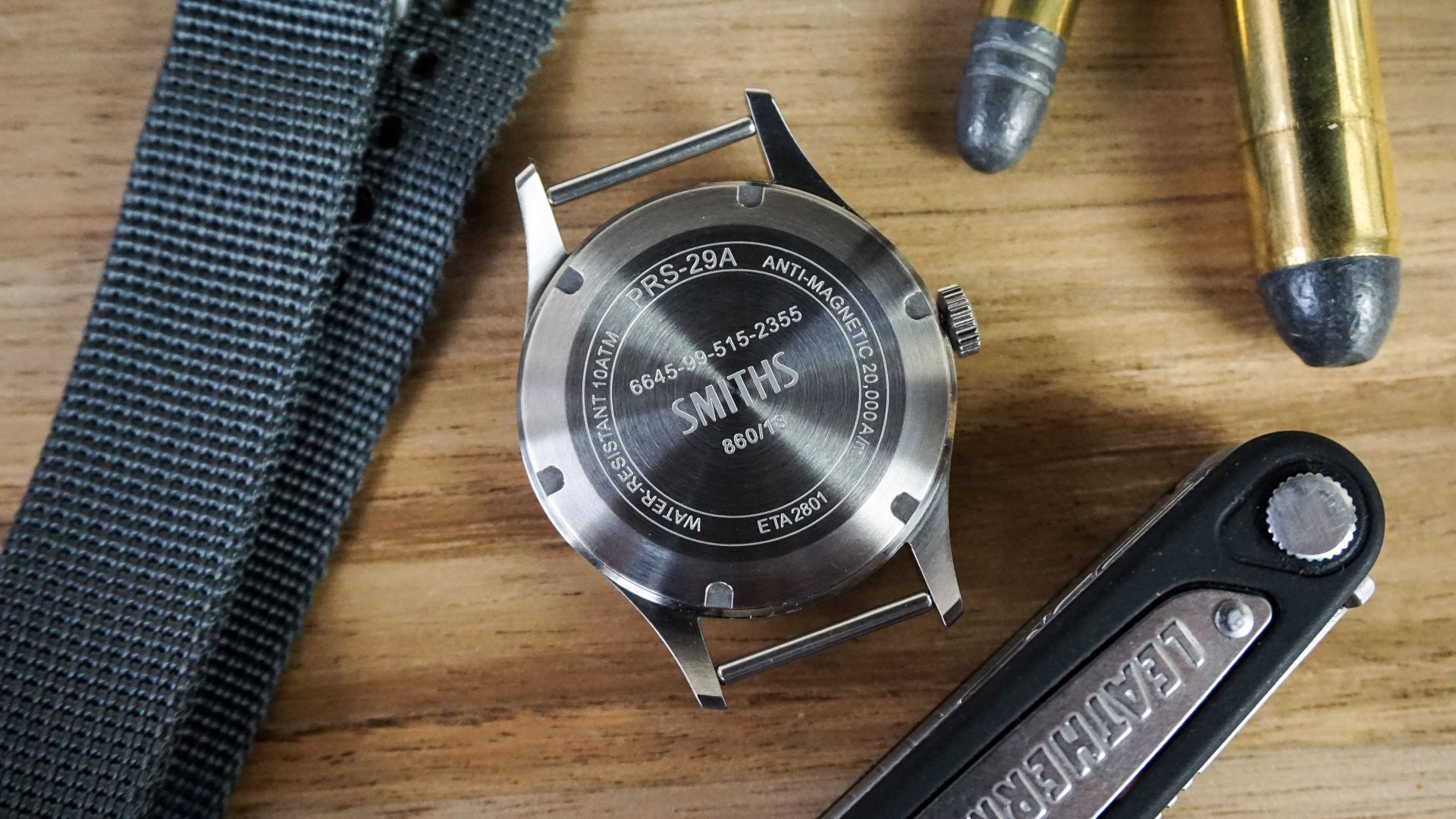 The caseback is simple, but the engraving is beautifully crisp!

Whilst the crystal of the original Smiths PRS29-A was acrylic, as per the W10, this new PRS29 has a sapphire box crystal, which offers the gorgeous dome of an acrylic, but its far more scratch resistant. Eddie also took the trouble to add an AR coating to the underside, which is a welcome bonus. 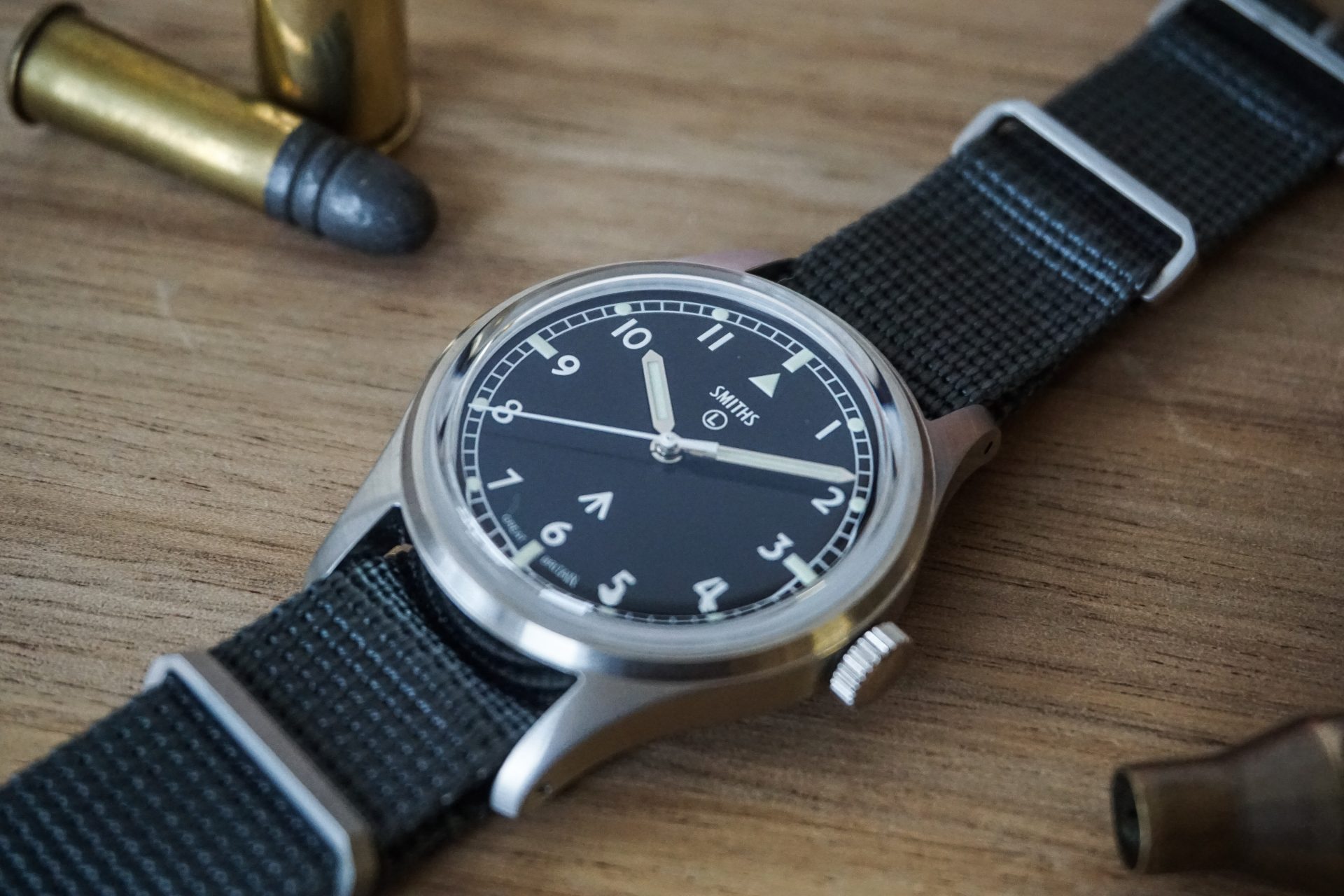 Looking first at the PRS29-A, the dial follows the same standard layout that the British M.O.D. specified for the first Smith’s W10 back in the Sixties. The dial is a semi-matte black with white Arabic numerals, which aren’t lumed, but the markers of the minute track are. It’s a classic military dial that is a near perfect recreation of the original, and it even has the classic M.O.D. “Broad Arrow”, and the encircled L to specify a luminous dial that uses (Super)Luminova.

It’s damn close to the original W10, scratching that itch for a military field watch, and the execution of the face is flawless. The simple sword hands of the PRS29-A are unassuming, but set the watch off nicely with a polished finish and a generous helping of SuperLuminova, making them legible under pretty much any circumstances. 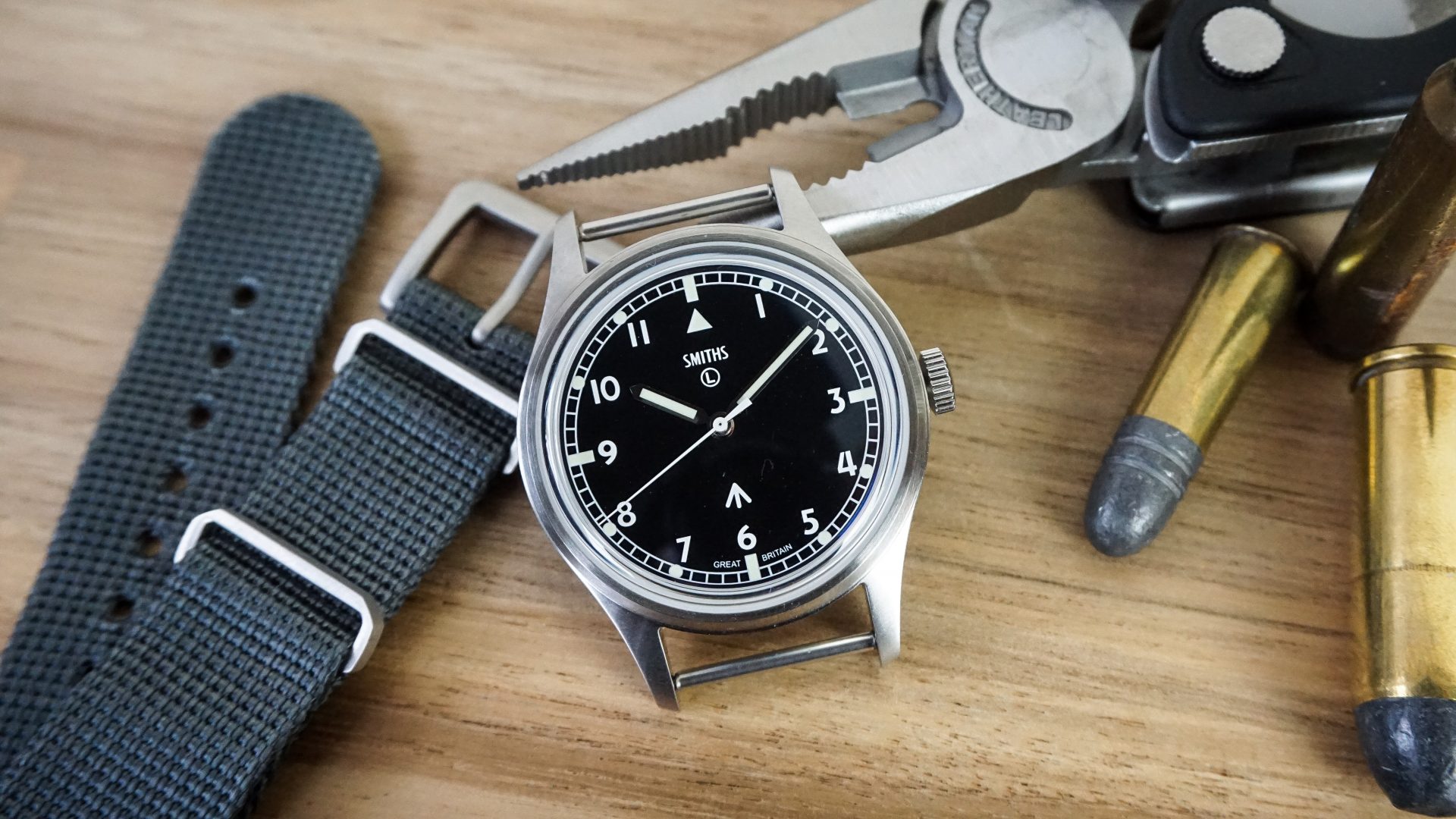 Moving onto the PRS29-AM, the dial layout is the same but with the colours inverted- a cream dial with black numerals and no lume. The Smiths’ logo is also slightly different, with a crown above the text and “England” added to the dial. The hands are a gorgeous heat blued steel, which really pop against the dial in the light and make the Air Ministry version a notch dressier that the other PRS29 model. 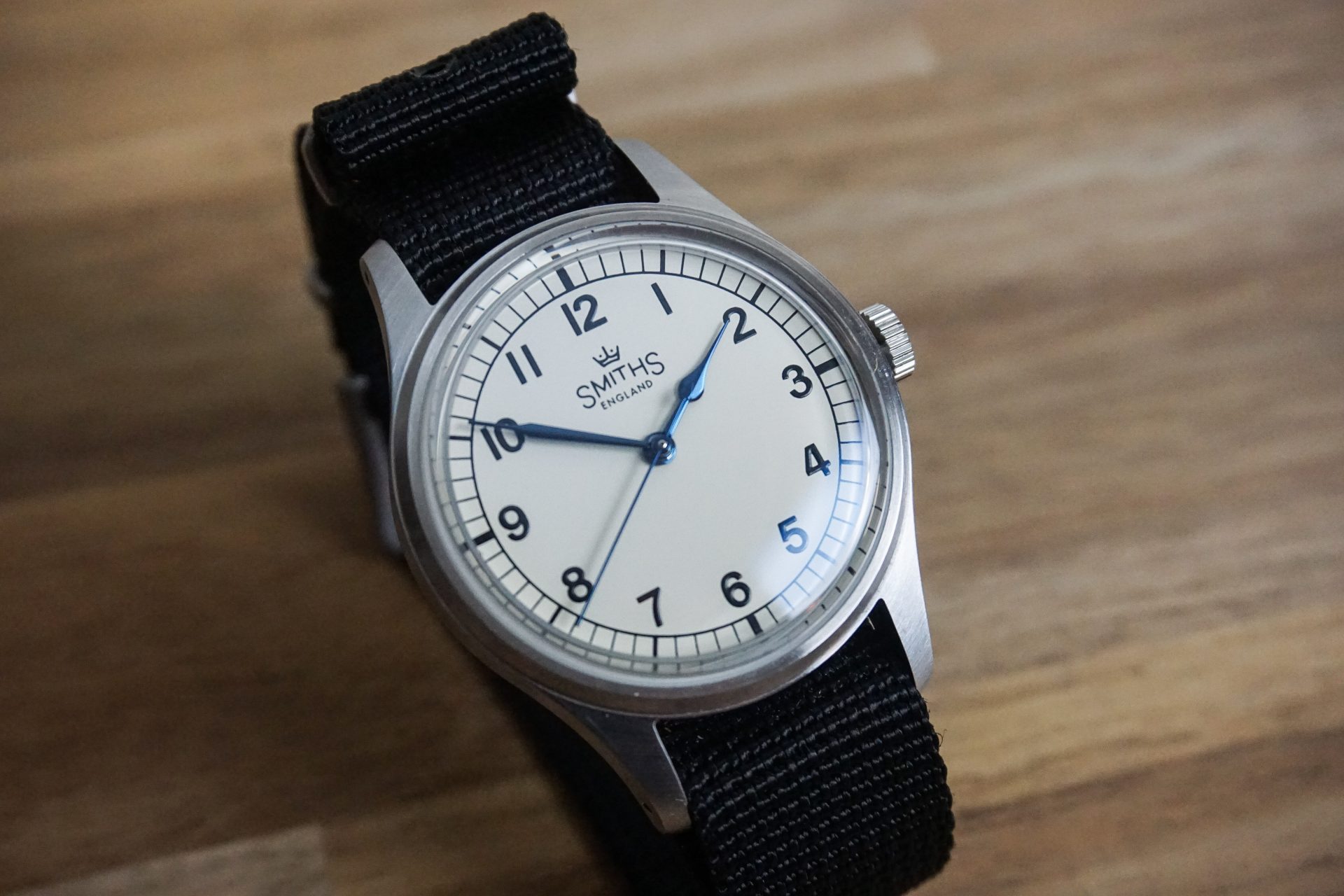 The heat-blued hands are the stand-out feature of the Air Ministry model.

As I mentioned earlier, the PRS29-A is the only one of the two with any lume. Whilst it might not look like there’s much on the watch, Eddie has made sure that there’s more than enough to glow like a torch when charged. He’s also done the decent thing and opted for SuperLuminova C3, the brightest choice, which you’ll definitely appreciate in a dark room. On a side note, I’d love to see what a PRS29-A looks like with vintage lume. It’s a trend that’s getting old, but I think in this case it would give the watch a nice twist and a splash more character. 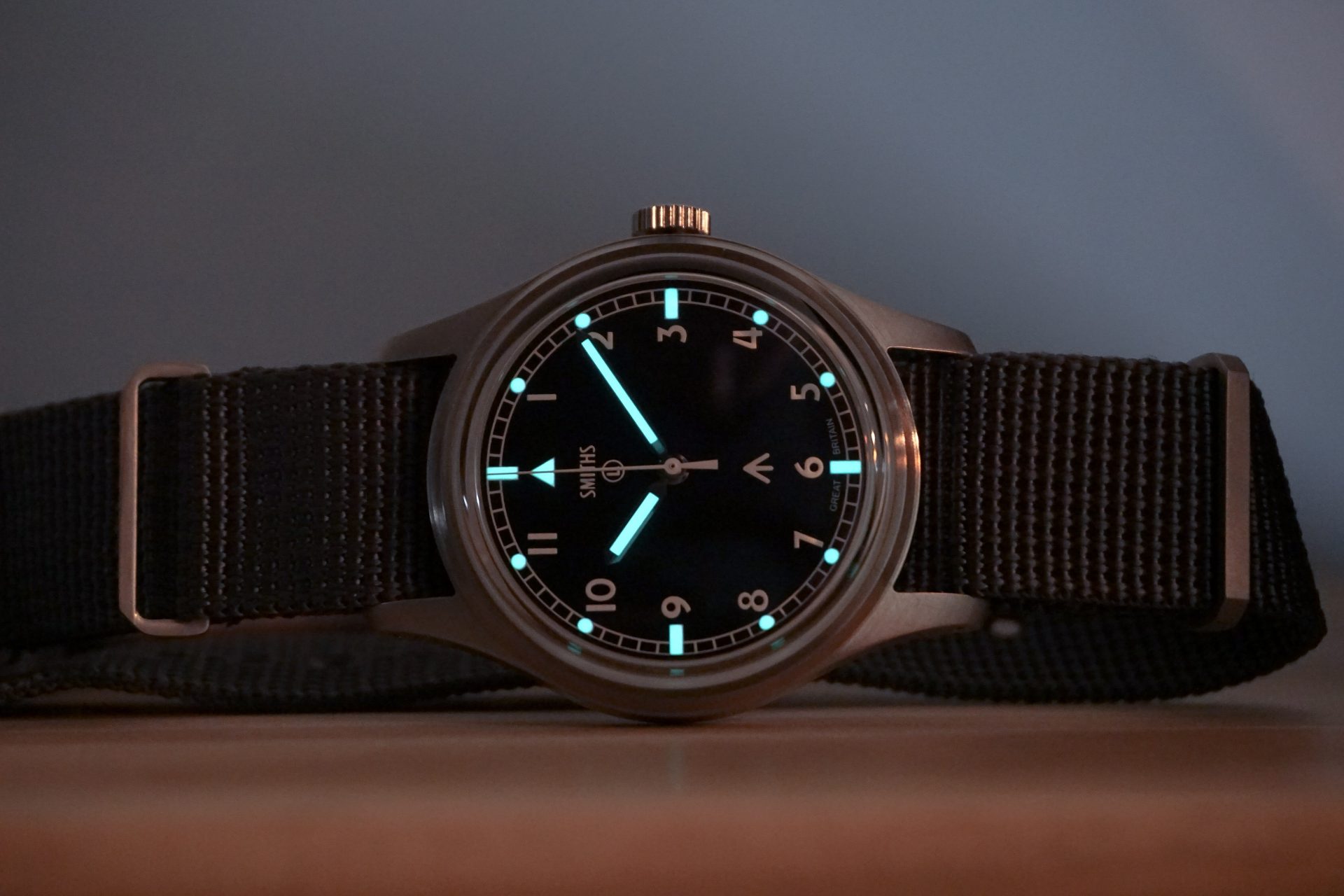 Eddie took the trouble to use C3 SuperLuminova, and it was totally worth it.

The movement powering the PRS29 is the ETA 2801-2. It’s a 17 jewel hand winding movement with a decent 42 hours power reserve and a beat rate of 28,800vph. Everyone knows ETA have a great reputation when it comes to movements, so I won’t delve into it any further. All I’ll say is that it’s the perfect choice for Eddie’s PRS29, which should most definitely have a hand wound movement like the original Smith’s W10. Eddie also took the time to fit an antimagnetic cage to the watch, which (combined with a soft iron dial) give the watch an anti-magnetic resistance of 20000 A/M, a neat feature for a tool watch! 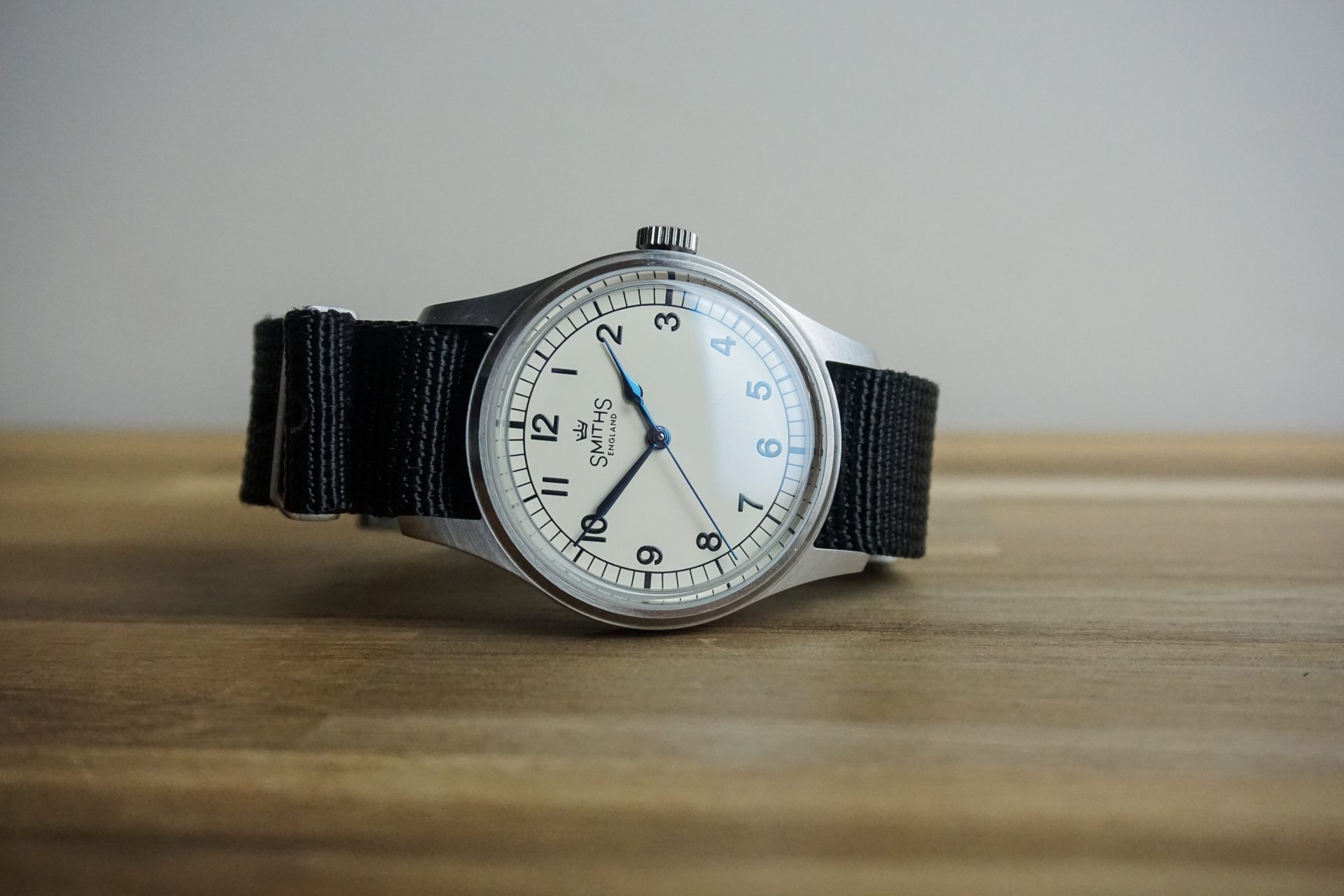 Both models come on a NATO strap, either black or grey depending on the model. They’re very well made, with the nylon dense and tightly stitched. It should be able to take a good deal of wear and tear without fraying. The steel hardware has a smooth bead blasted satin finish and is robust and well made. The only weak point seems to be the buckle tongue, which is a tad on the flimsy side. The other issue for me (admittedly one of the few I have with these watches) is that, whilst strong, the nylon is too course. It can be uncomfortable at times and it’s tricky to pull the excess material through the keepers. However, should you find this too much of an issue, a replacement NATO is cheap and easily come by.

Just take a look at that broad arrow…

Of course, in looking at a vintage-style field watch like the Timefactors PRS29, I simply have to draw a comparison with the Hamilton Khaki Field Mechanical, a reissue of Hamilton’s milwatch from the same era. The two are very similar, and you can check out my full review of the Hamilton here. As to which is better? Well it’s genuinely pretty subjective. I think in terms of quality the PRS29 edges out in front, thanks to the box sapphire crystal, superior lume and crisper dial print. However, I think the vintage lume of the Hamilton gives it a touch more warmth and character, and the crown is nicer to use. The prices of both are pretty similar, so really it comes down which looks you prefer. 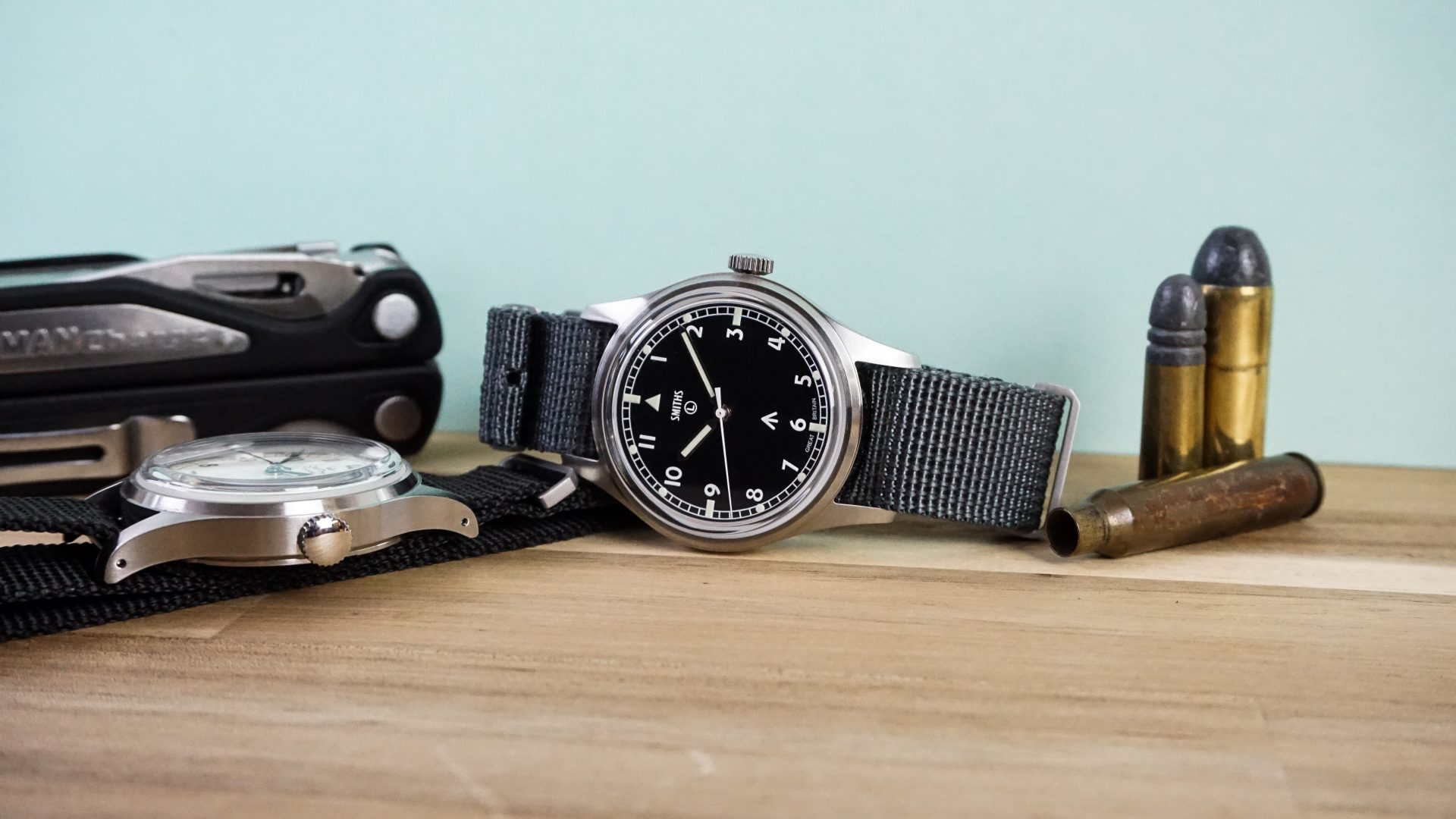 The case is very well executed, with very sharp lugs.

Without taking the competition into account, both models of the Timefactors PRS29 are fine watches. They’re excellently made and remind me why I love microbrands. It says a lot that the only genuine grumble I can find is the strap (I’m not counting the crown size as I think it should match the original).

Whatever your opinions on homage watches, what’s great about Timefactors pieces is that they’re honest. Eddie doesn’t dress up his watches with a load of phoney history and stretched truths. He just cranks out very well made timepieces that stay true to what the original was intended to be. You can pick up either watch for £405 from the Timefactors website. I think it’s a fair price considering what you get, and how much you’d pay for a similar watch like the Hamilton. Long story short, if you hate faux-vintage lume and want a military-inspired tool watch with unbeatable build quality, you can’t go wrong with a Smiths PRS29 from Timefactors.

If you agree, you can check out the full specs of the PRS29 and purchase it here.