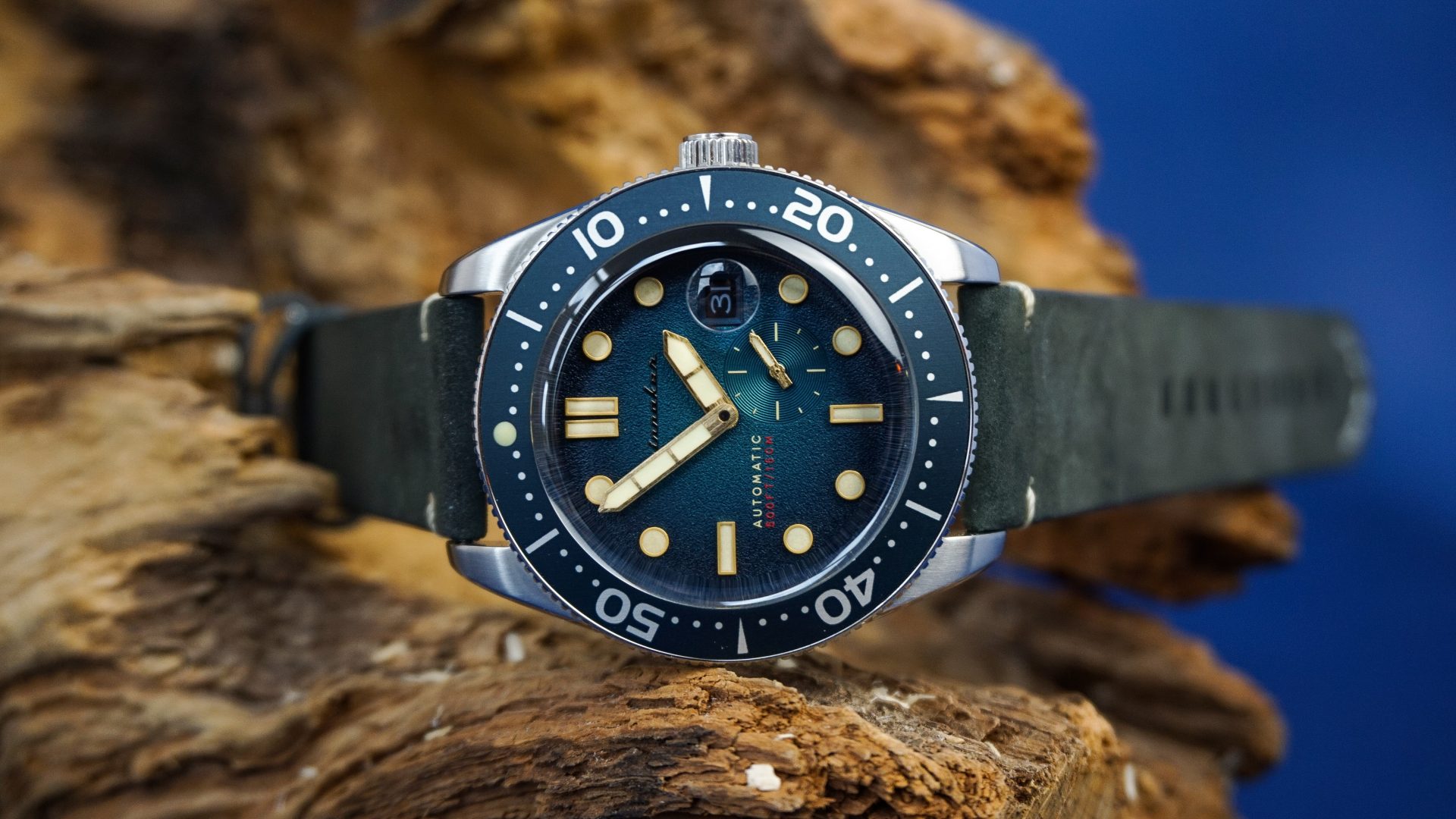 Dive watches are certainly one of the most popular types of watches out there today. Such is their ubiquity that it seems as though the models all start to blend together if you look at them long enough. One brand who’ve dipped their toe into these busy waters is Spinnaker, who’ve kindly gave me one of their Croft dive watches to review.

The Croft is named after Robert Croft, a US Navy Diving Instructor who in 1967 became the first person to free dive to depth of 200 ft. Priced at $320, it’s certainly an affordable entry level option for those in the market for a dive watch. But is Spinnaker’s offering worthy to bear Croft’s name? Well, you’ll have to read on to find out…

The Spinnaker Croft looks a little different from your run of the mill diver.

The 43mm steel case of the Spinnaker Croft is shaped in a fairly standard design for a diver. It’s vaguely reminiscent of the old Rolex Submariner cases, but is a lot chunkier. The steel is brushed except for a polished chamfer to the edge of each side, and the underside of the case is similarly polished. Whilst a nice idea, I would prefer it if the chamfer itself were much sharper. It would add a touch of refinement I think the case of the Croft lacks. I also don’t understand why Spinnaker chose to engrave their name on the left hand side of the case. I mean, no one is going to see it, so why bother? It just looks somewhat odd to me. However, despite that, the case is a solid one. 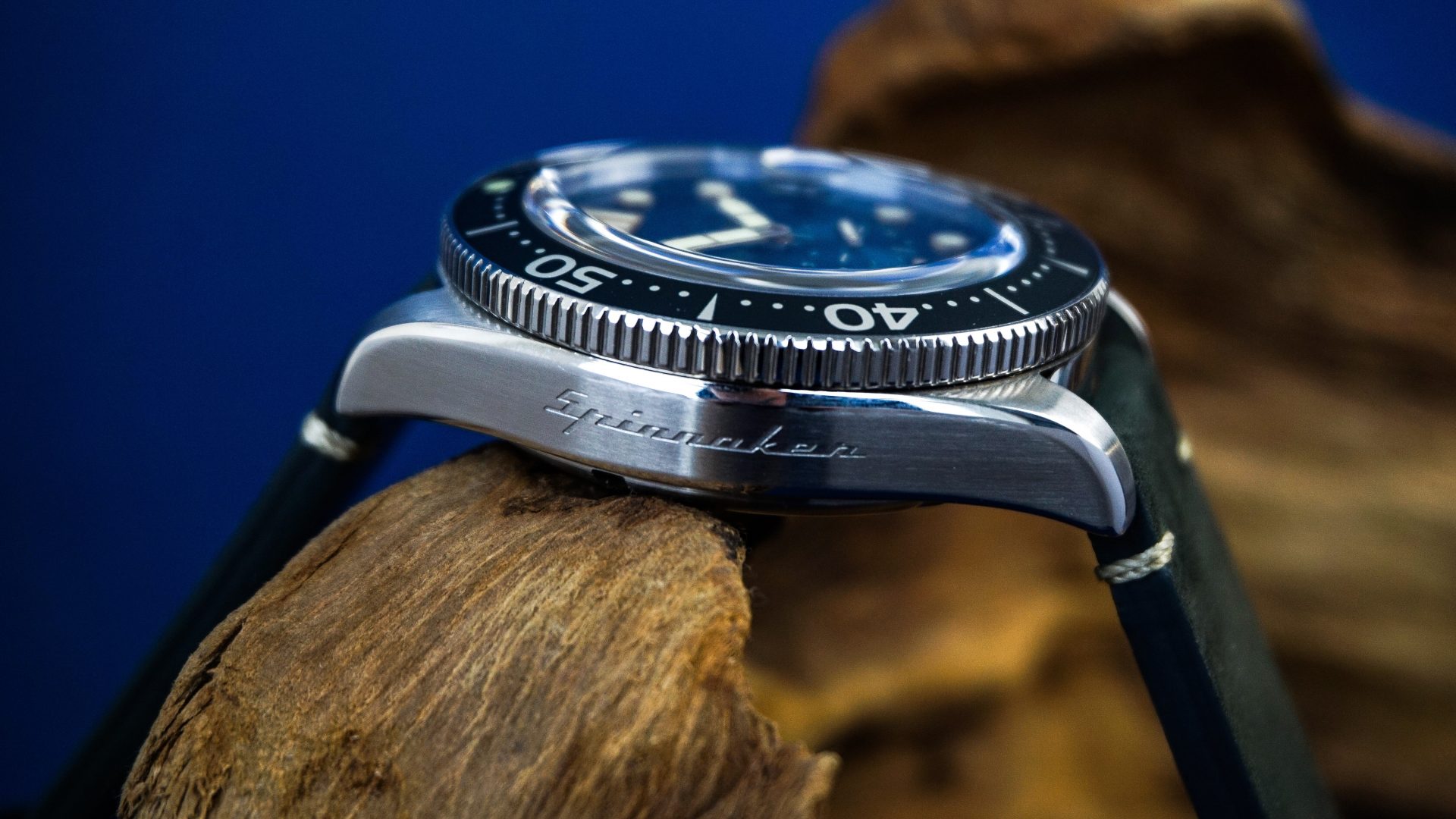 I’m going to be honest and say I don’t get why Spinnaker put their name on the side of the case.

Like most dive watches at this price point, the 60-click bezel of Spinnaker’s Croft has a standard coin edge and aluminium insert. It’s pretty easy to use and clicks into place nicely. Irritatingly my insert on this piece is out of alignment ever so slightly, and it does bug me a little.

The crown is signed with Spinnaker’s logo, and is easy enough to unscrew and wind, but personally I wouldn’t mind if it was a tad bigger, not just for ergonomics, but also to balance better with the large case.

Spinnaker have made the Croft with a 150m water resistance rating. Whilst not astounding, it will be more than adequate for swimming and other day-to-day water activities. 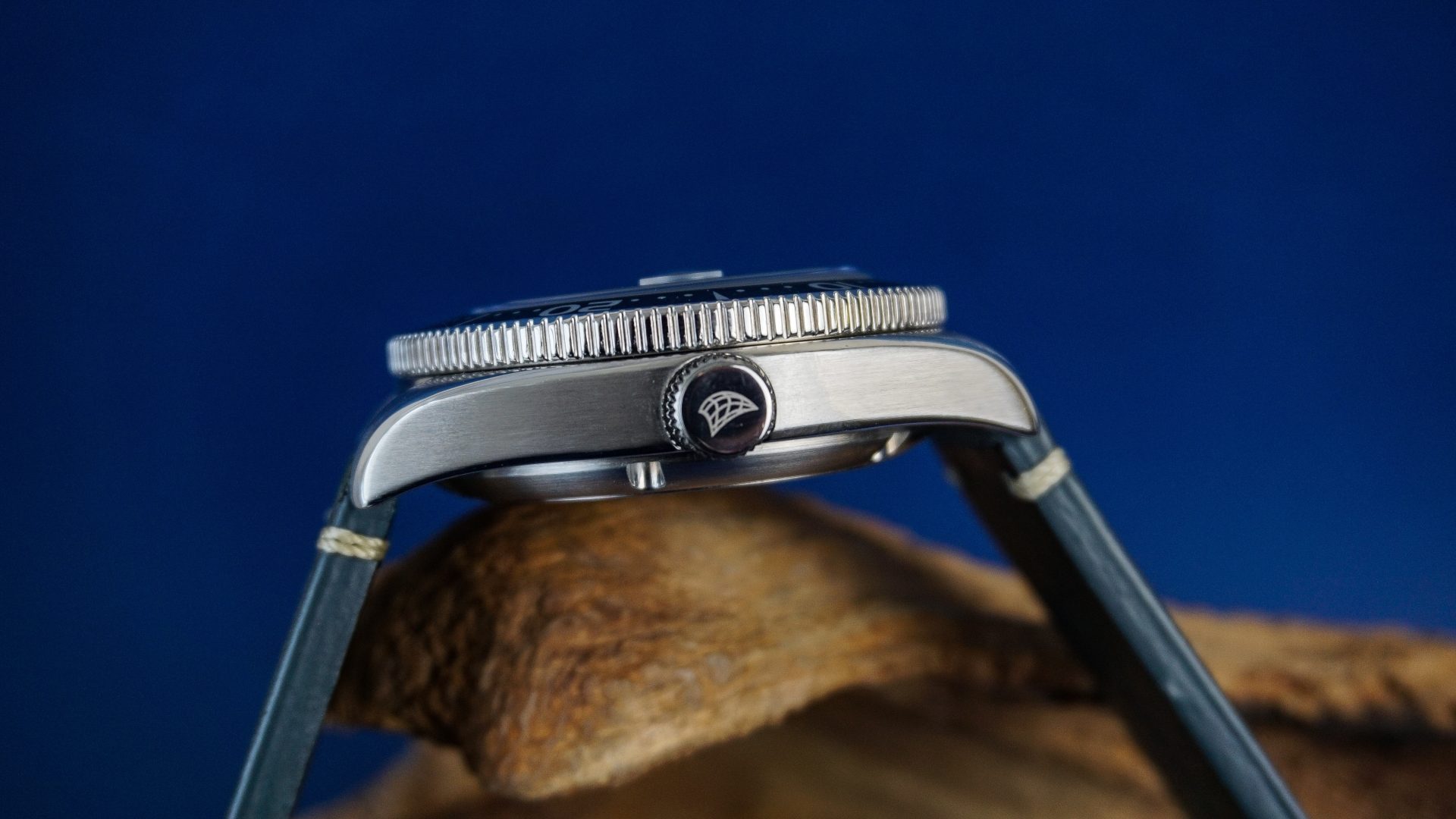 The profile of the case is pretty standard.

With the Croft, Spinnaker took the trouble to use a sapphire crystal. It’s nice to see a watch at this price point with one, and the edge of the crystal even has a rounded edge that reminds us of a vintage domed acrylic crystal. There’s also a circular date magnifier, which whilst not for everyone, is something I’m rather fond of. It’s not often you find a watch with a date magnifier these days. 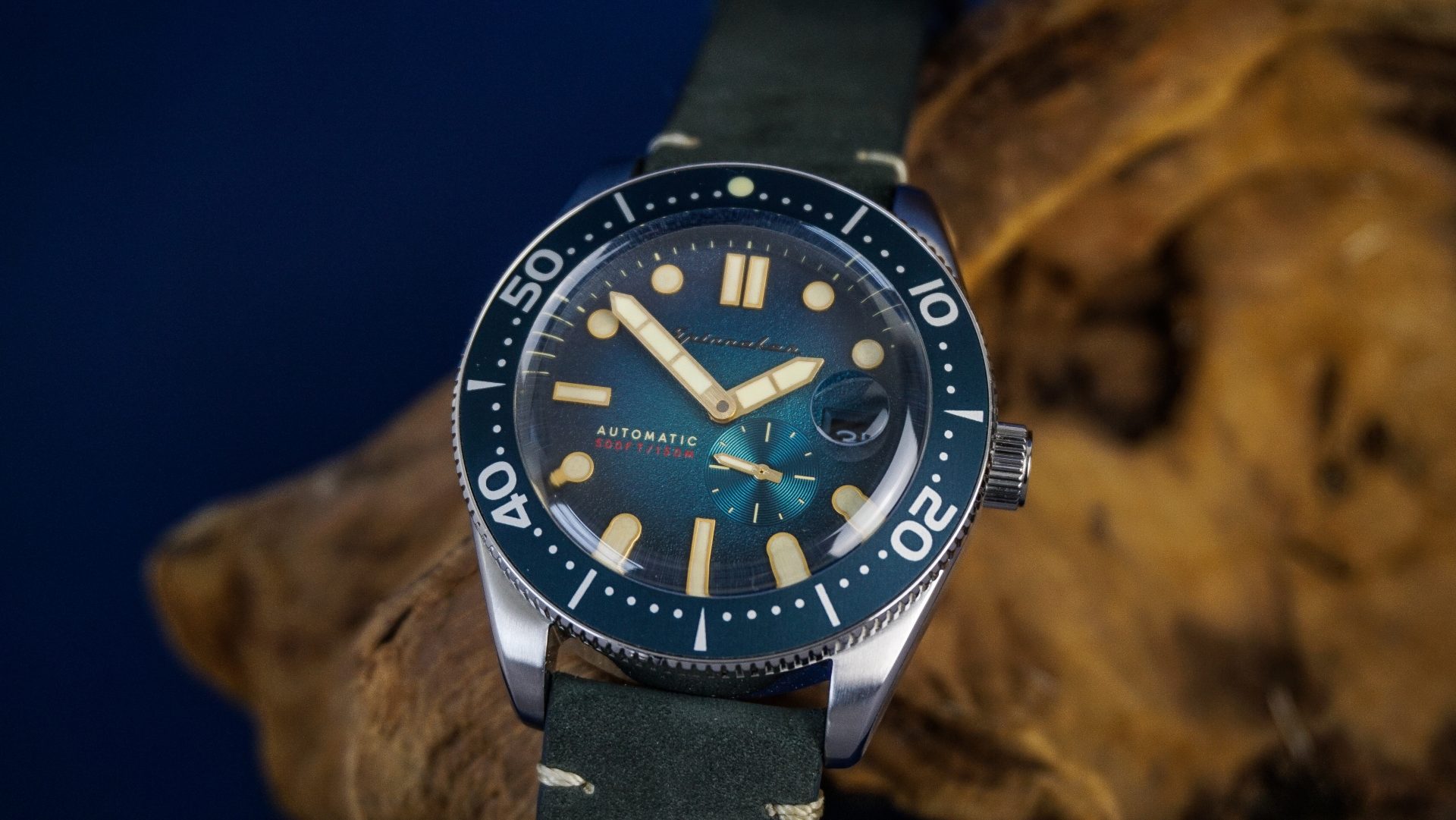 The dial layout of the Croft is somewhat unusual with that sub-seconds hand placement!

The gilt hour markers and handset are taken straight out of the Sixties, and any fan of vintage watches will instantly recognize the style. They lend a nice retro touch to the watch, but Spinnaker managed to blend this with some nice contemporary touch of the offset sub-seconds dial, which I really like. Spinnaker went with a brushed finish for the hands, that helps keep the look very functional and informal.

The hands and markers are filled with vintage SuperLuminova. It’s a nice pale yellow that, with the gilt, brings a nice warmth to the dial. Whilst vintage SuperLuminova is not known to charge very easily, the sheer amount of it on the Croft means that it’s still very easy to read in low-light, and I was pleasantly surprised how clear it was in the dark. 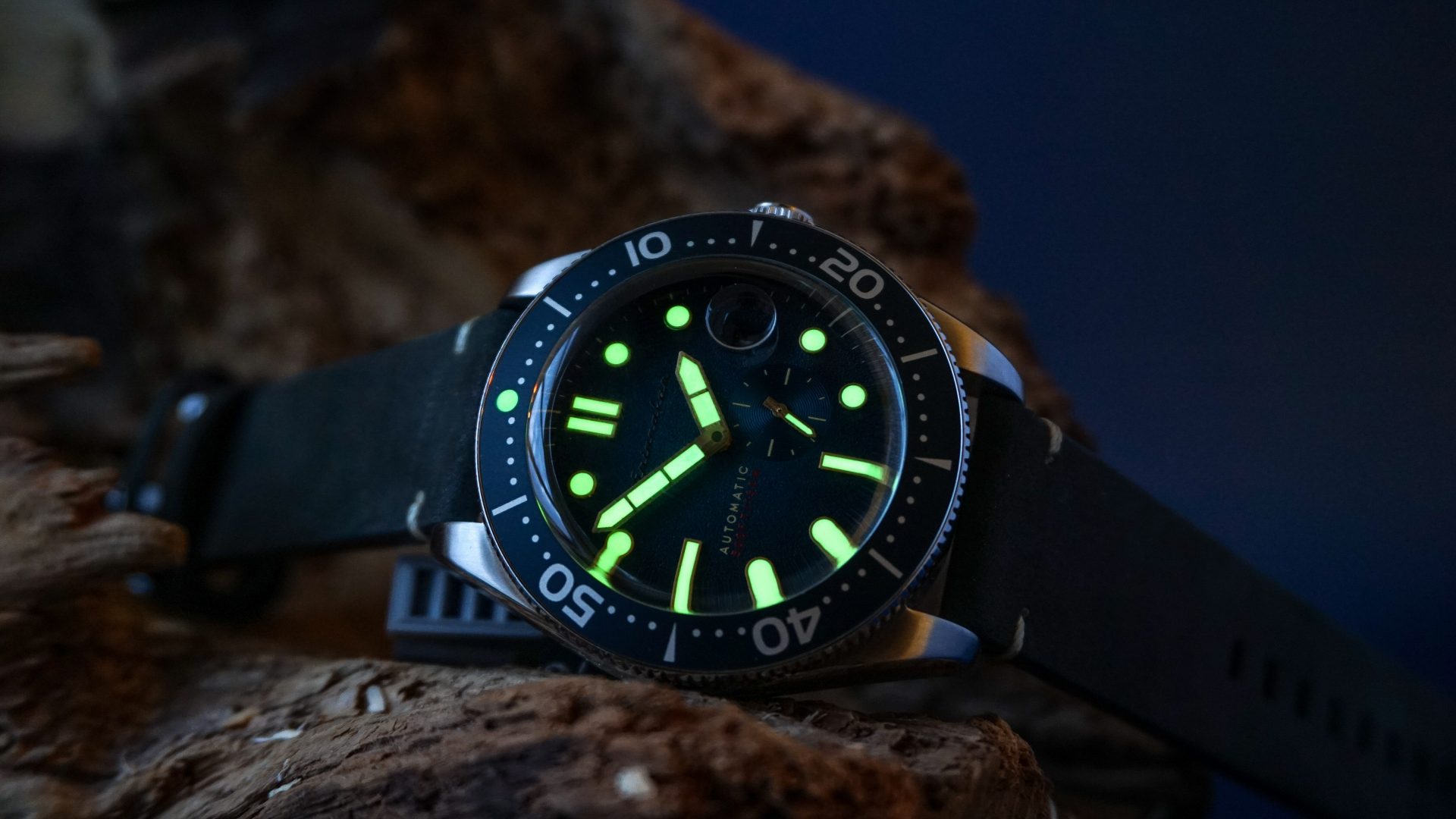 The lume on the Croft is surprisingly good for the money!

Powering the watch is a 21 jewel Miyota 8218 automatic movement. Given the price point of the Croft it’s the obvious choice. Miyota’s reputation for producing affordable and reliable mechanical movements is well-established, and we know they can take a licking and keep on ticking. Perhaps it’s only notable downside is that it doesn’t hack (that’s stop running when you pull the crown out).

Spinnaker added a display case-back to the Croft, and also gave the movement a custom rotor. Whilst not necessary, it is always appreciated when a company takes the time to let us be able to watch the movement tick away. 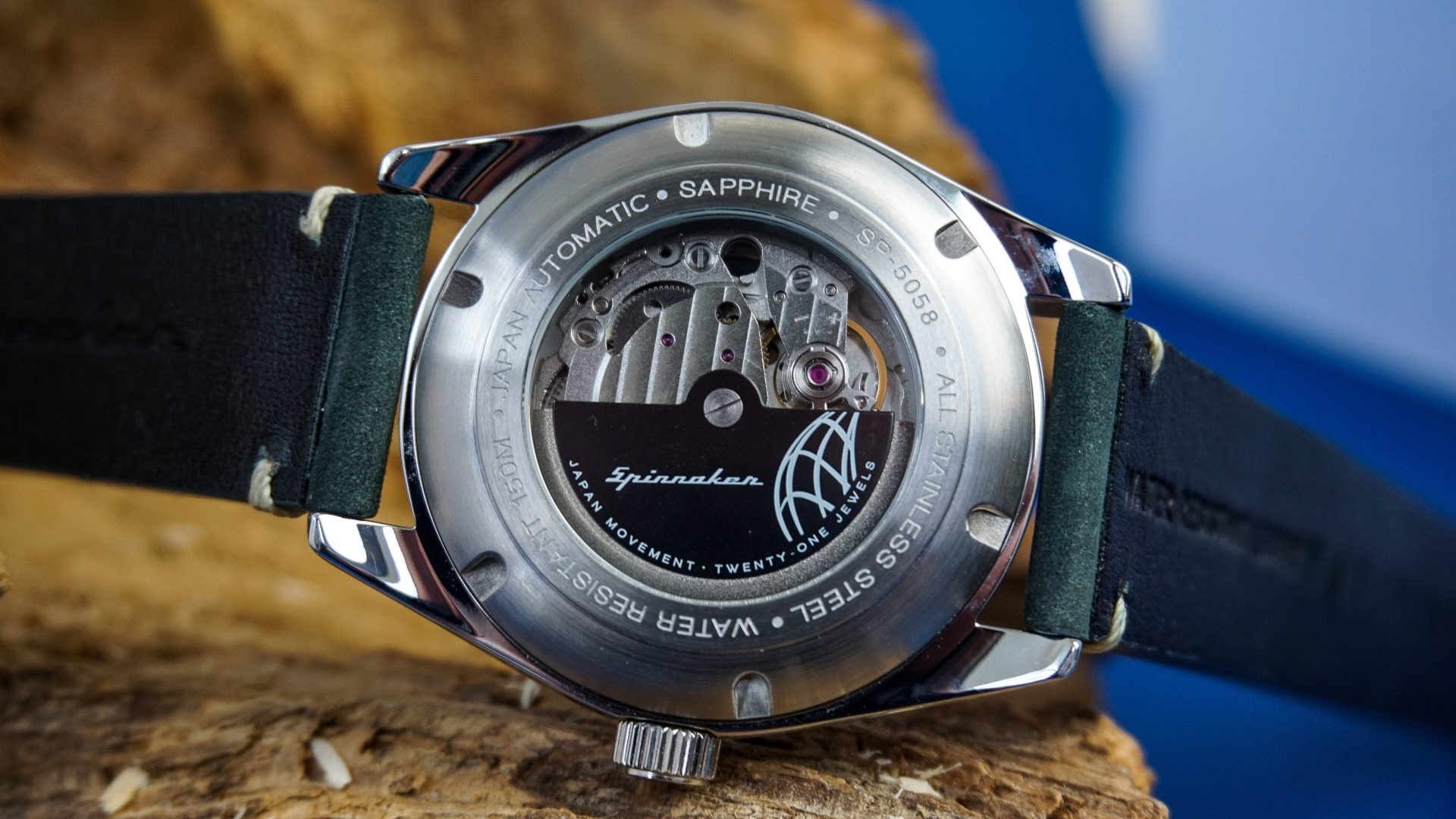 It’s always nice to have a display case back!

The Croft comes on a chunky blue/grey leather strap, which is also water resistant. The thickness suits the style of the watch, and for the money feels of decent quality. The buckle is also nice and chunky, with a brushed finish to match the watch. The finish of the leather has an almost suede texture to it, and all-in-all I’m pretty happy with the strap. 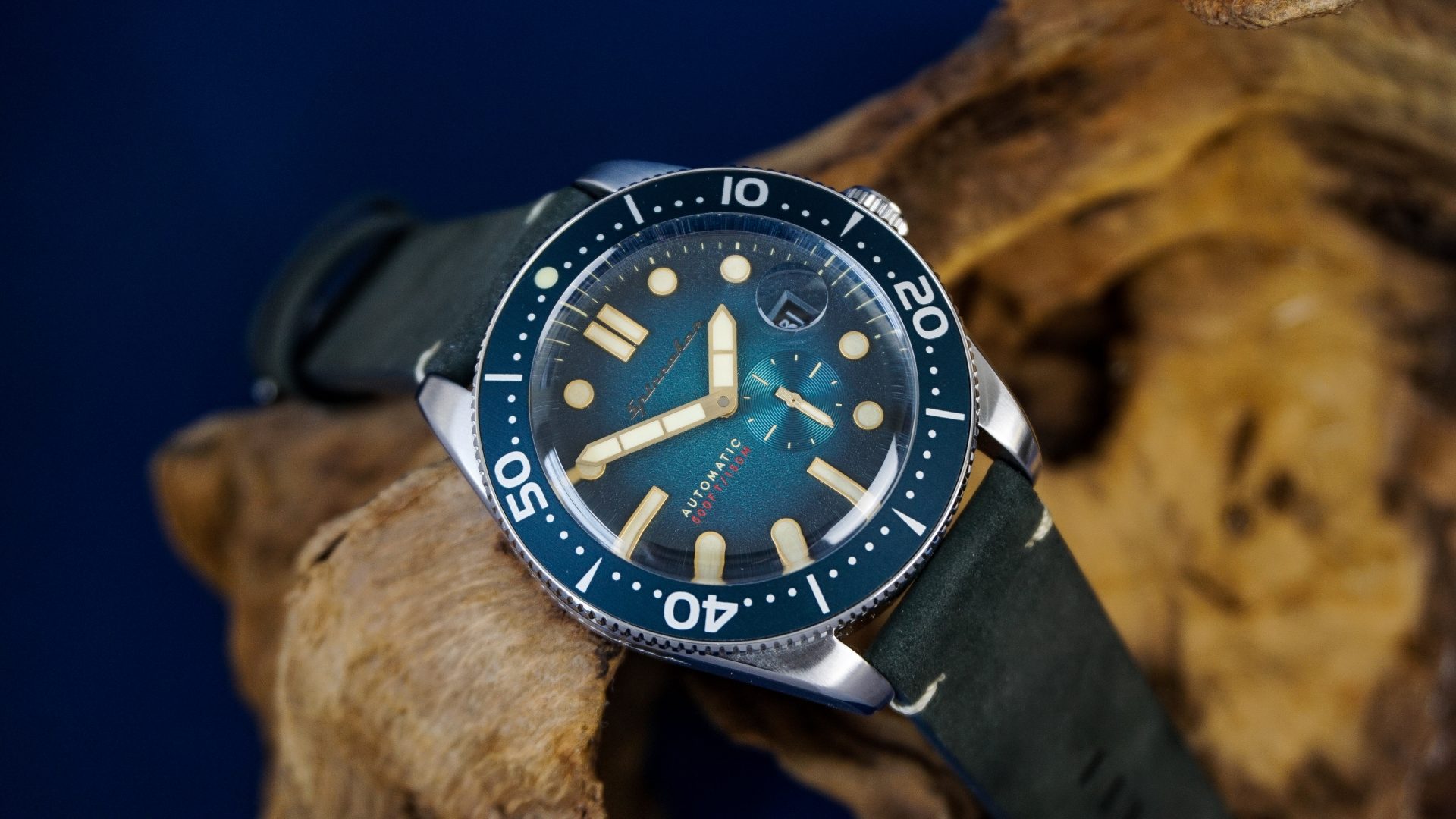 The texture of the dial is pretty neat in my opinion.

Overall it’s fair to say that whilst the Spinnaker Croft is not the most refined of designs, it offers a decent set of specs at a pretty good price. Whilst it certainly isn’t for the slim-wristed, if you’re after a chunky diver with a retro-vibe but a more contemporary design, then this is a good choice.

This watch is definitely on the more casual side, which won’t be for everyone. I’ll admit that I prefer designs that are a bit dressier, and the case could be finished better, but I also appreciate that everybody has different tastes. Ultimately I think that the Spinnaker Croft makes a good beater for those who want a solid casual watch they can just pick up and wear every day.

If you’re interested in the Croft, you can view it and Spinnaker’s other models on their site here.