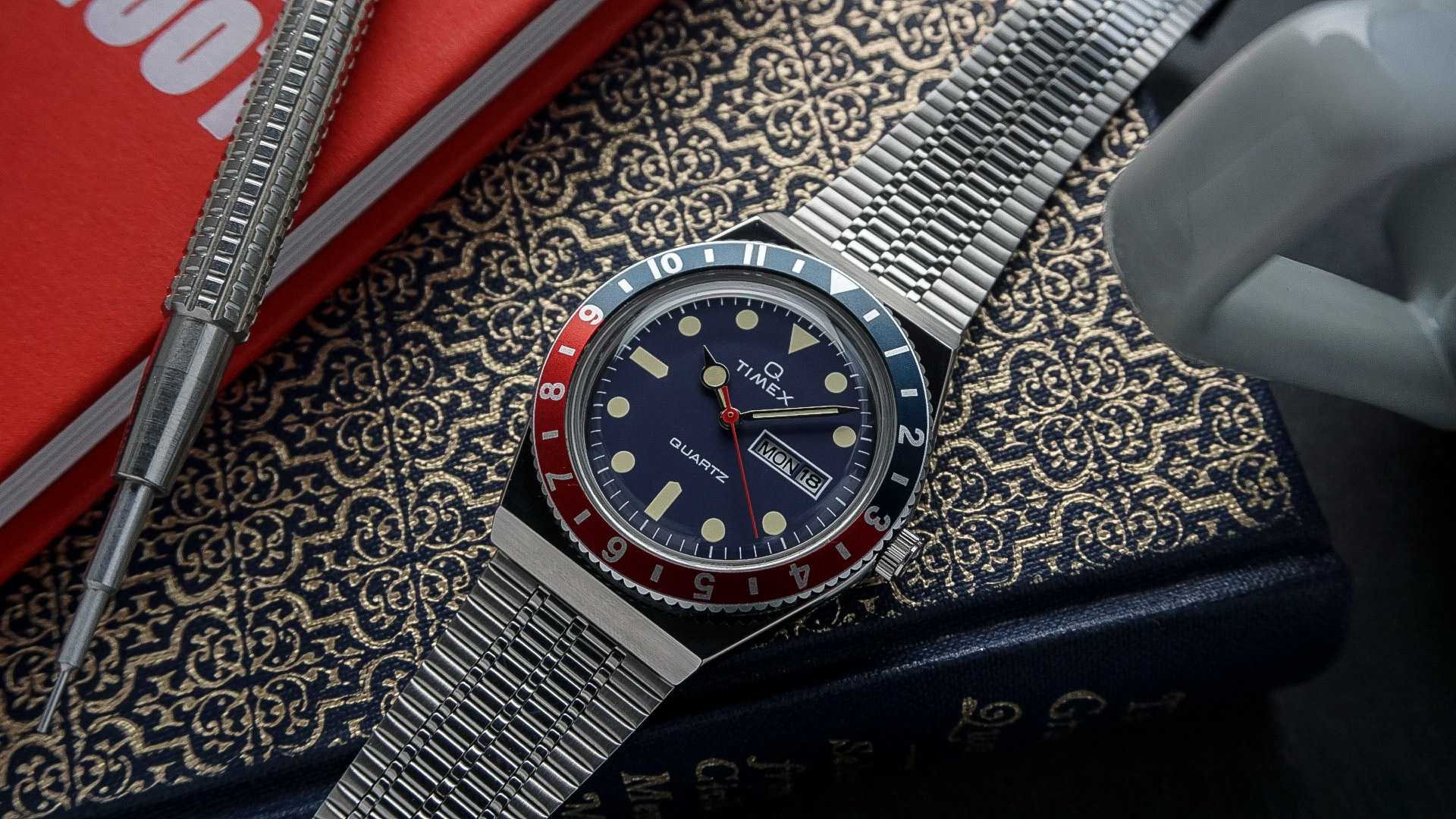 When it was released back in 2019, the Q Timex 1979 reissue took the watch community by storm. As the name implies, it’s pretty much an exact recreation of one of their models from 1979, and the watch is a striking example of that decade’s style.

It sold out multiple times, and some were selling on eBay for double the £159 retail price. There’s no denying that the Q Timex is a pretty watch, but despite its pleasing looks, this is just a Timex. Surely it can’t be that great? Well, now that the hype (and the prices) have died down a bit, I thought I’d buy one for myself and see what all the fuss was about. 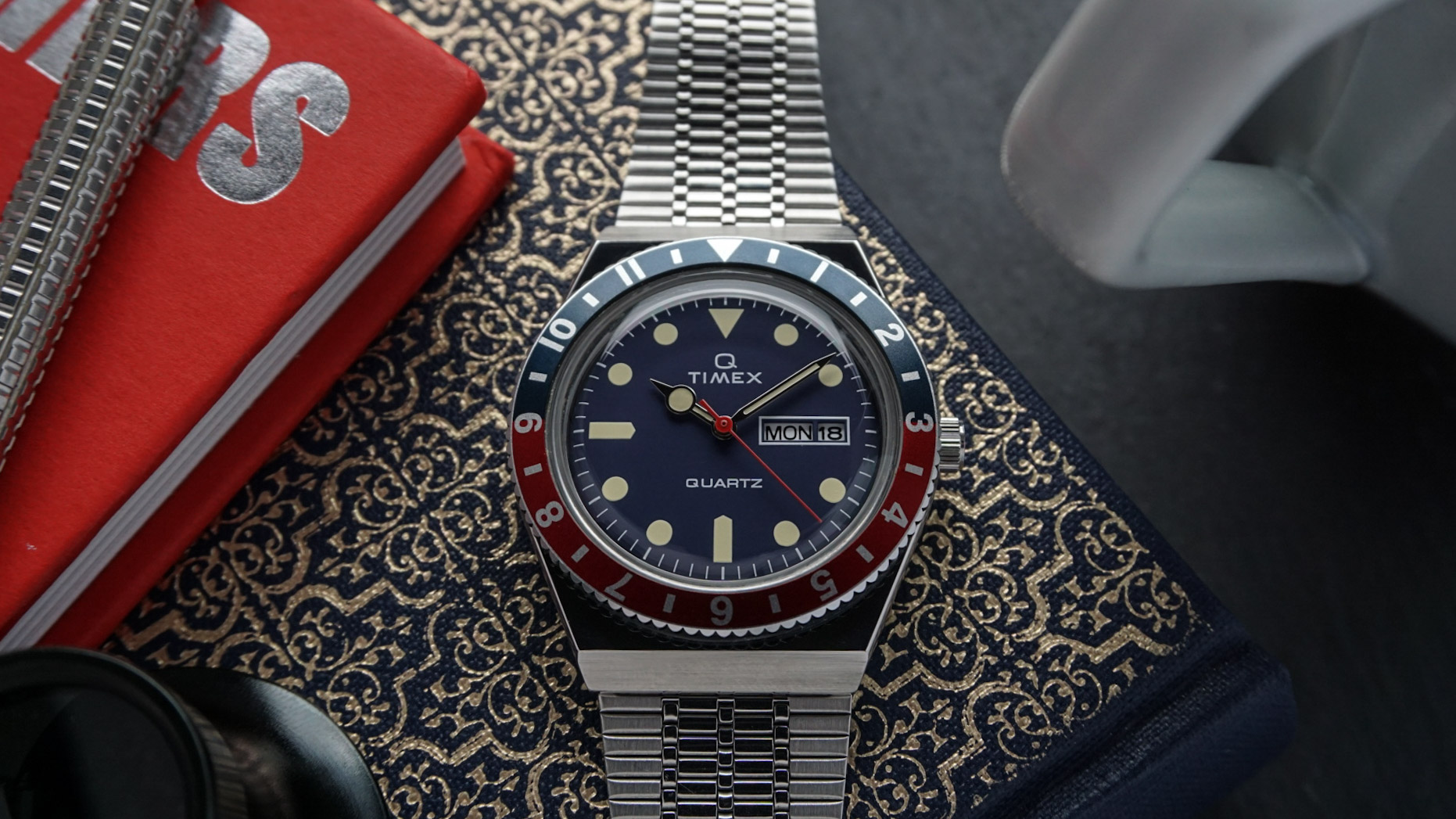 The distinct angular steel case is straight out of the 1970’s. It’s certainly one of the most unique cases out there, and with its hooded lugs the watch has a very streamlined profile. There is some variety in the finishing too, with each end being brushed. This frames the polished case top nicely and creates some lovely contrast when you glance at the watch on your wrist.

However, the finish is one of the first areas that show’s that the Q Timex is a budget piece. The brushing is acceptable, but you can see that the finish of the polished surfaces is not brilliant. The metal is noticeably uneven, which creates distortions in the reflection when the metal catches the light.

At 38mm wide and just 11.5mm thick the Q Timex wears very well on my 6.75” wrist. It’s pretty slim and fits nicely under a cuff if you’re inclined to wear this with a shirt.

The Q Timex also has just 50m water resistance, which is a little disappointing. Timex are careful to call the watch “diver-inspired”, rather than label it a dive watch, but on a piece like this 100m would be nice. It’s another reminder that this is watch sits at the cheaper end of affordable.

One very neat feature the Q Timex does have is that the caseback features a battery hatch. This allows you to replace the battery without taking off the whole caseback. So there’s no need to either pay a jeweller to do it, or fiddle around with it yourself.

Of course the star of the show here is that Pepsi bezel. It’s a bidirectional friction bezel, just like you’ll find on the original Q Timex. Because of this, it’s got a smooth turn that has just the right amount of resistance. Again though, the finish isn’t great. You can see that the anodised coating is rather thin, and it won’t take much to scratch it.

Timex chose to use an acrylic crystal on the Q, just like you’ll find on the original. Of course this helps add to the vintage charm of the watch, and creates some wonderful distortions at certain angles. Whilst not as scratch resistant as the mineral glass you’ll usually find on a Timex, the acrylic does have the advantage that you can polish any scratches out. For example, I bought this watch second hand and it arrived with the centre of the crystal noticeably scuffed. But after 5 minutes with a cloth, some Autosol, and some Brasso to finish off, you would never know it had been scratched! 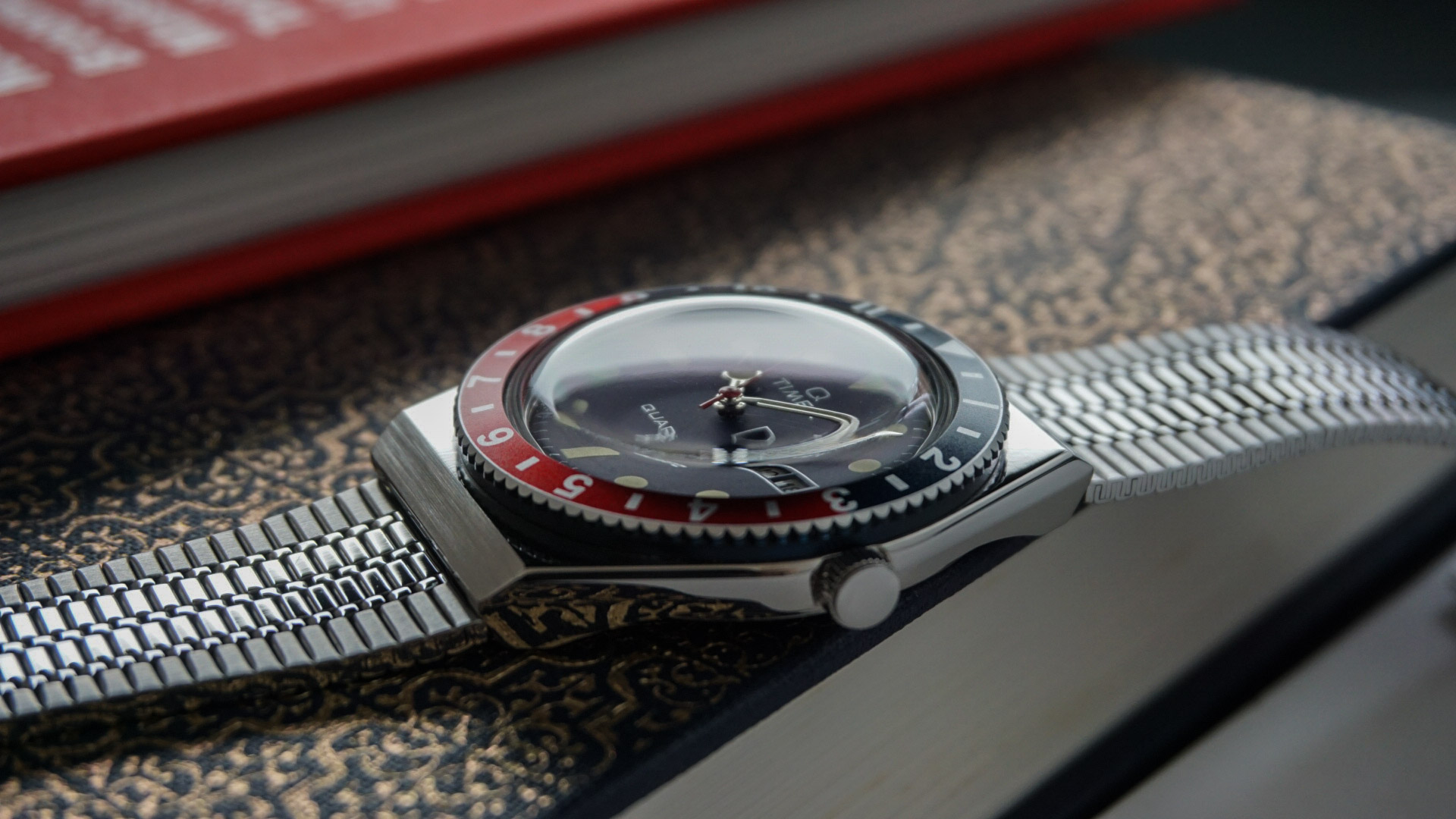 The dial of the Q Timex is the sort of generic diver layout that’s ubiquitous these days. Of course, that doesn’t mean it’s bad. The large markers are nicely legible and the light custard colour Timex chose for them complements the matte blue dial rather nicely. Somewhat surprising on a budget watch like this, the dial print in general is very good. It’s really crisp, and as hard as I look, I can’t see any flaws. For me, the one real negative on the dial is that day/date window. I think it throws the otherwise clean dial out of balance. I also find the white border and day/date discs clash with the light patina of the hands and markers. That said, this is a reissue, and Timex have been faithful to the original design, so I can’t really criticise their choice. It’s simply a matter of personal taste.

The polished handset is similarly reminiscent of vintage divers, in particular Rolex’s Mercedes handset. Again, their design isn’t unique, but the finish is actually pretty good for this price range.

One annoying niggle is that the red seconds hand, which complements the red on the bezel oh so well, isn’t properly aligned with the markers. Unfortunately it’s all too common on budget quartz watches like the Q Timex, but despite my OCD, it’s not the end of the world. 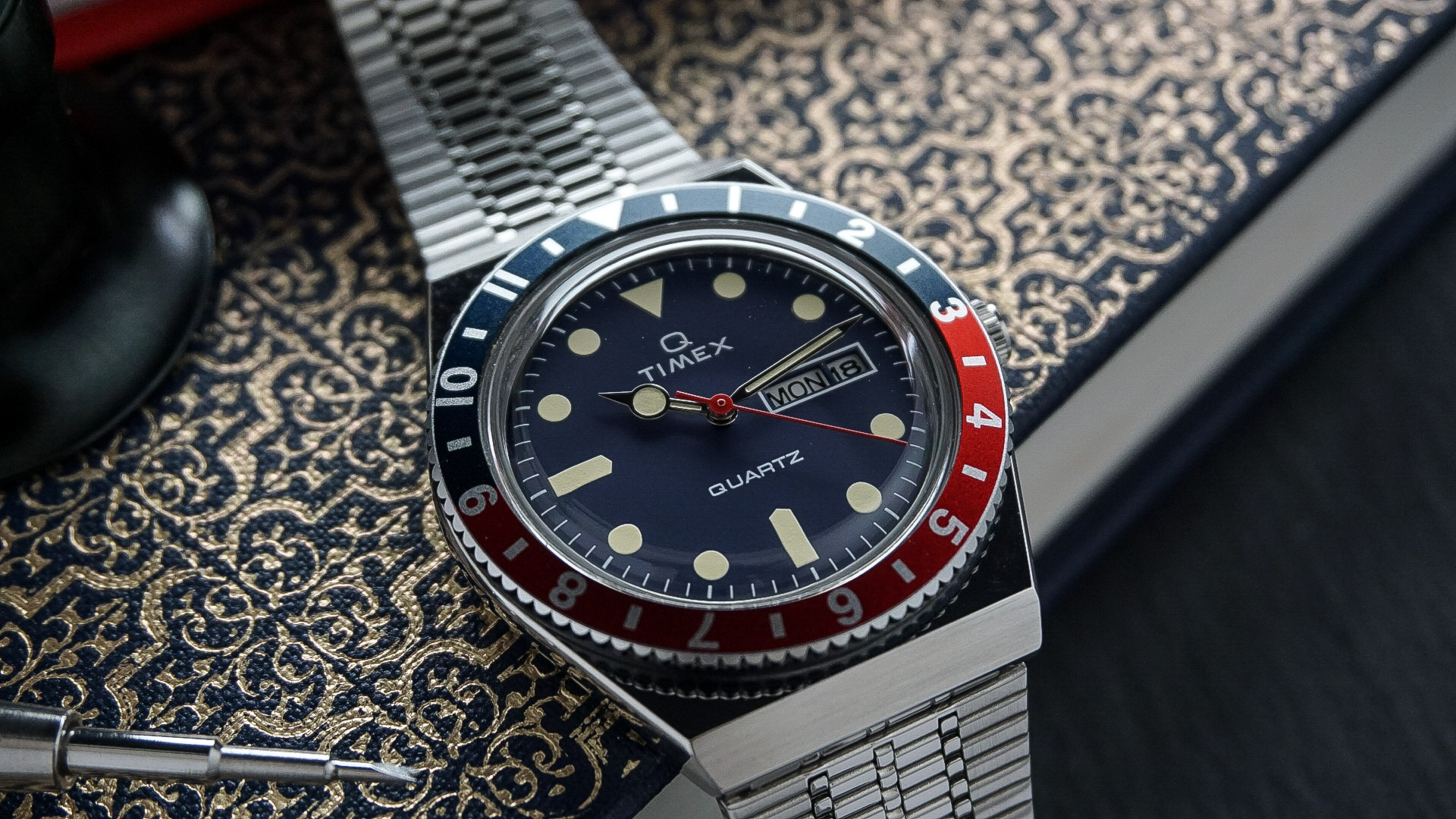 Now the hands and markers, are indeed lumed. But, as you can probably guess on a watch that’s this cheap, it really isn’t very bright. The large markers do help with legibility in the dark though, and the dial is surprisingly legible. I’m not trying to fool anyone though. This lume can in no way compete with more expensive dedicated tool watches. 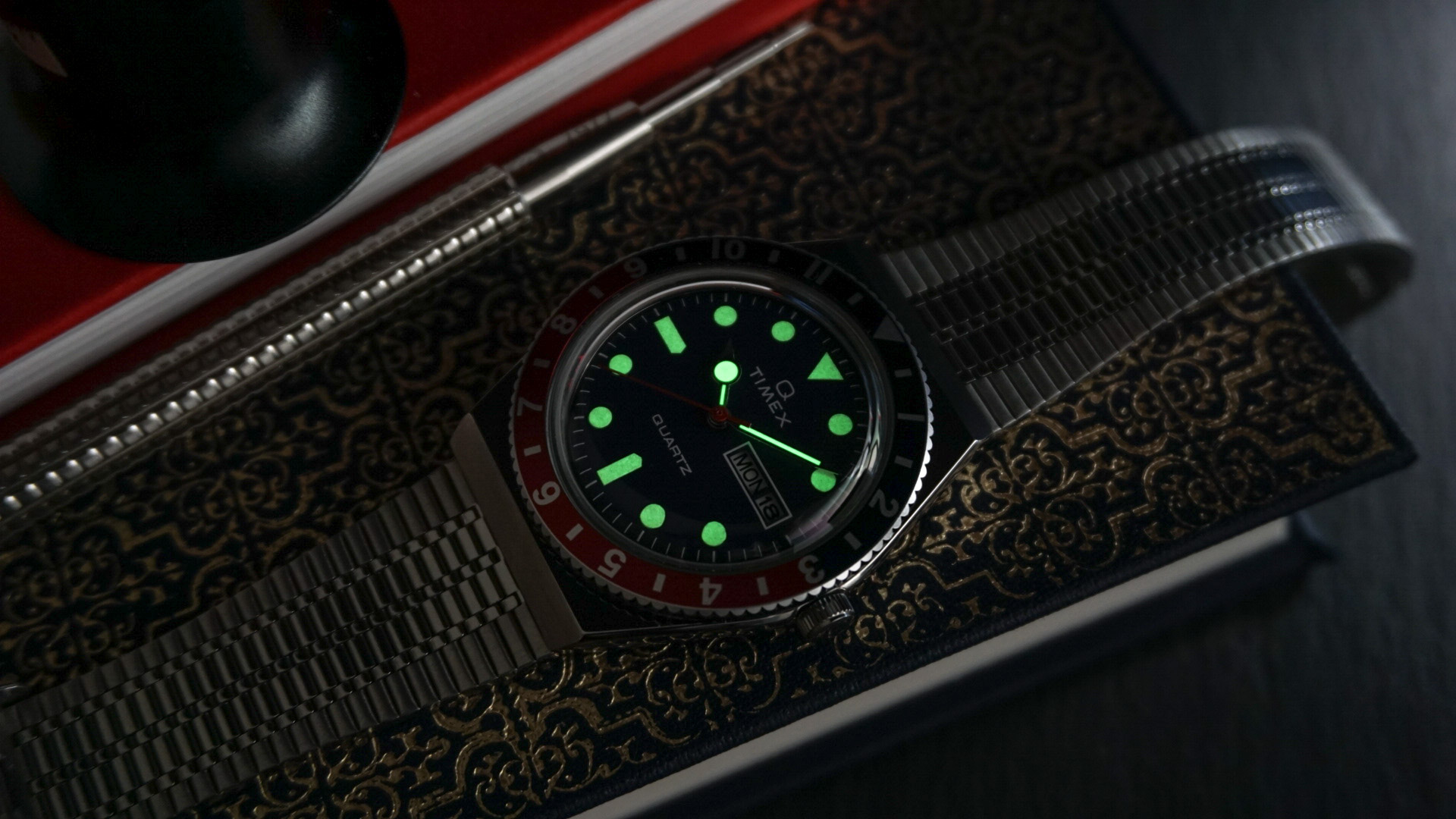 This shot makes the lume look deceptively bright. But it fades quite quickly.

The Q Timex naturally uses a quartz movement. The Seiko PC33 to be precise. It’s fair to say that this is a budget movement. It’s got zero jewels and costs under a tenner to replace. Despite this, because it’s a quartz movement you don’t have to worry about maintenance and longevity. After all, the whole reason for the Quartz Crisis was that these movements were cheaper and more reliable than their mechanical counterparts.

However, the movement does have one small negative. Whilst the movement has a quickset date feature, the day has to be set manually. In other words you’ve got to rotate the hands past midnight to advance the day. Though again, as this is a quartz movement, it’s not the sort of thing you’ll need to do often. At the end of the day this is exactly the type of movement you’d expect to find in a budget piece from the likes of Timex. But whilst this is a cheap movement, don’t let that put you off. Despite their low cost, quartz movements are the dominant movement type for a reason – which is that they’re very accurate and reliable for an extremely low price. 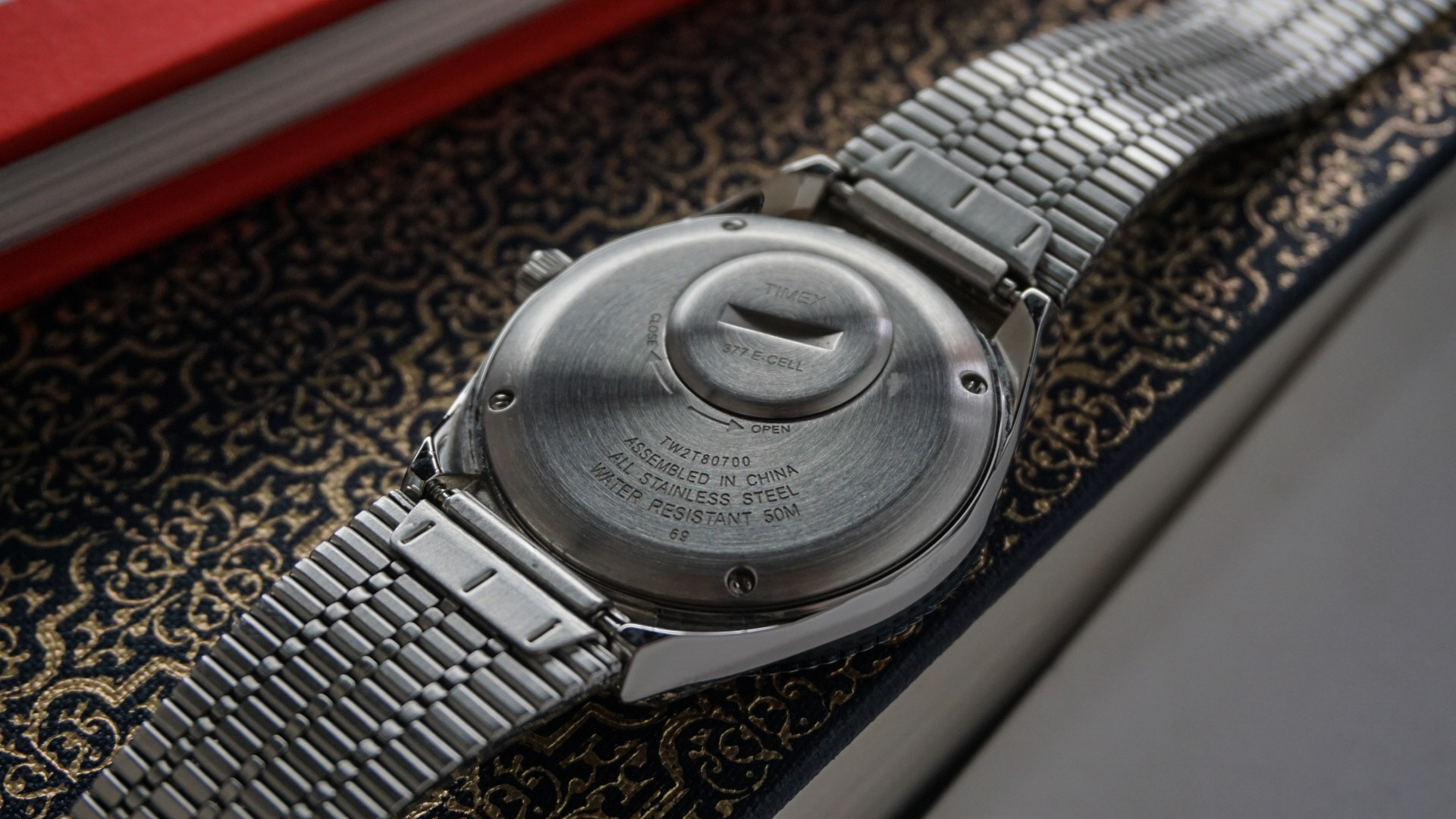 The battery hatch is a useful feature.

Aesthetically the woven steel bracelet suits the Q Timex to a tee. The mix of brushed and polished finishes help to keep things interesting, but overall the bracelet’s style is pretty casual. Despite it being made from stamped steel, the quality does seem surprisingly good too. The bracelet has a good amount of flex, but doesn’t feel like it’s going to fall apart. It’s pretty easy to adjust too, as all you have to do is lift the tension bar on the one half of the clasp and slide it up the bracelet to tighten in.

However, overall I’m not that keen on this style of bracelet. I don’t like how the excess is hidden on the underside. If you’ve got puny wrists and a lot of excess strap, it’s tricky to tuck it in before you close the clasp. You’ve got to practically wrap it right round your wrist before securing the watch. It’s also pretty bad for catching hairs, which can be quite uncomfortable.

Of course you can swap the steel bracelet out for another strap. For reference the Q Timex has 18mm lugs. But, despite my reservations about the bracelet, I don’t think the Q Timex would look right on anything else. 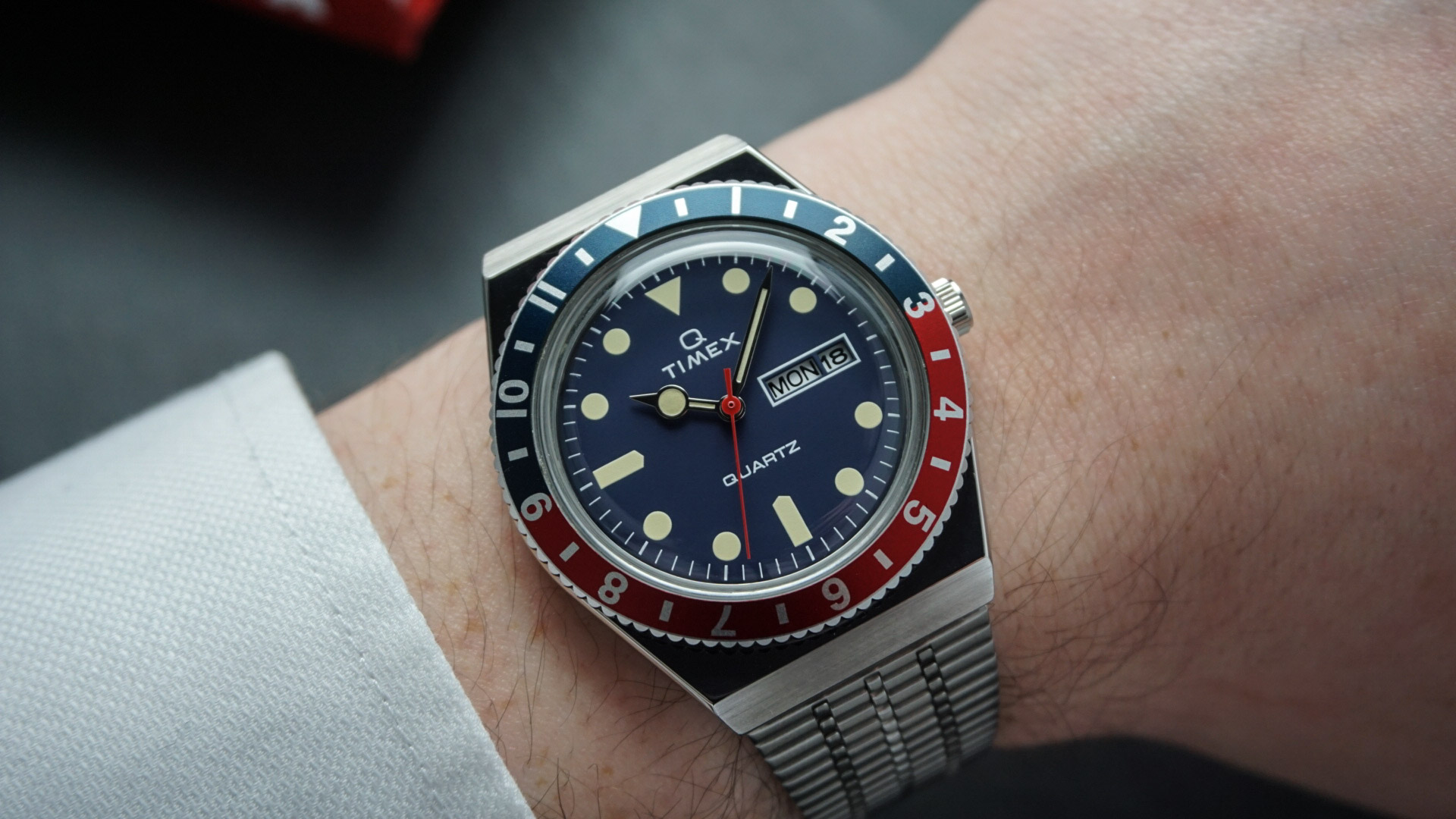 There’s no denying that a lot of the value of this watch is dictated by its design. After all, on paper this watch is nothing special. But at this price, does anyone really care?

Yes, it’s a watch of fairly average quality powered by a cheap quartz movement. Yes, it might even be a touch pricey for the specs you get. But for £159 you get a very faithful and attractive reissue that aesthetically ticks a lot of boxes. It’s got a ton of funky 70’s charm, and that Pepsi bezel is pretty eye catching.  Indeed the design as a whole as a timeless appeal to it. It’s crisp, bold and colourful.

So, I think you can sum up the Q Timex like this- It may be a budget piece, with budget quality, but for under £200 it is a charming cheap and cheerful pickup. It really isn’t hard to see why these watches keep selling out.

Such has been their popularity, that Timex has now brought out an automatic model, and has released 3 new colourways of the quartz variety. These can all be purchased from Timex’s website here.

Menu
We use cookies on our website to give you the most relevant experience by remembering your preferences and repeat visits. By clicking “Accept”, you consent to the use of ALL the cookies.
Cookie settingsACCEPT
Manage consent