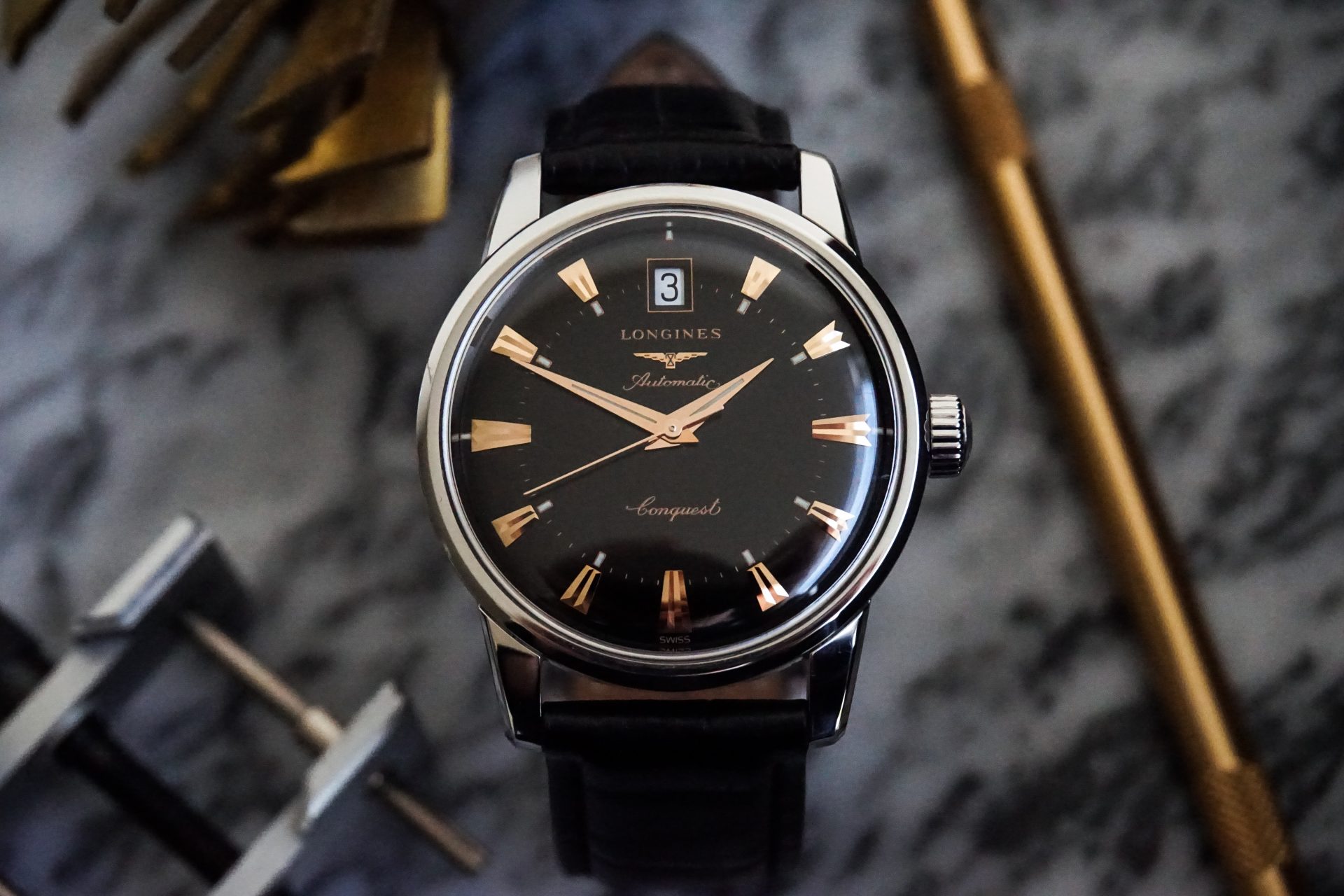 Longines have built up quite the reputation in recent years for releasing great heritage reissues from their archives. There’s the ever popular Longines Legend Diver, the Flagship model, and most recently the Skindiver, which was announced at Basel 2018. One of my favourite of the Heritage collection is the Longines Conquest Heritage, a modern interpretation of the collectable vintage Conquest line introduced in the 1950’s.

Longines always hit it out the park with their designs!

The Conquest Heritage is virtually identical to its vintage counterpart, and has been part of the Longines Heritage collection for a number of years now. The Conquest is offered in a variety of variations, with 35mm & 40mm case sizes, black or silver dials, and a gold plated case variant.

Usually with a reissue, the manufacturers cannot resist tweaking the design to differ it slightly from the original watch. (Looking at you random unwanted date windows!) However, Longines chose to exercise restraint with the Conquest. The polished steel case is identical to the original, with no frills except for a chamfer to the lugs. It’s simple, 1950’s design and narrow bezel mean that the watch wears slightly bigger on the wrist despite its modest size. 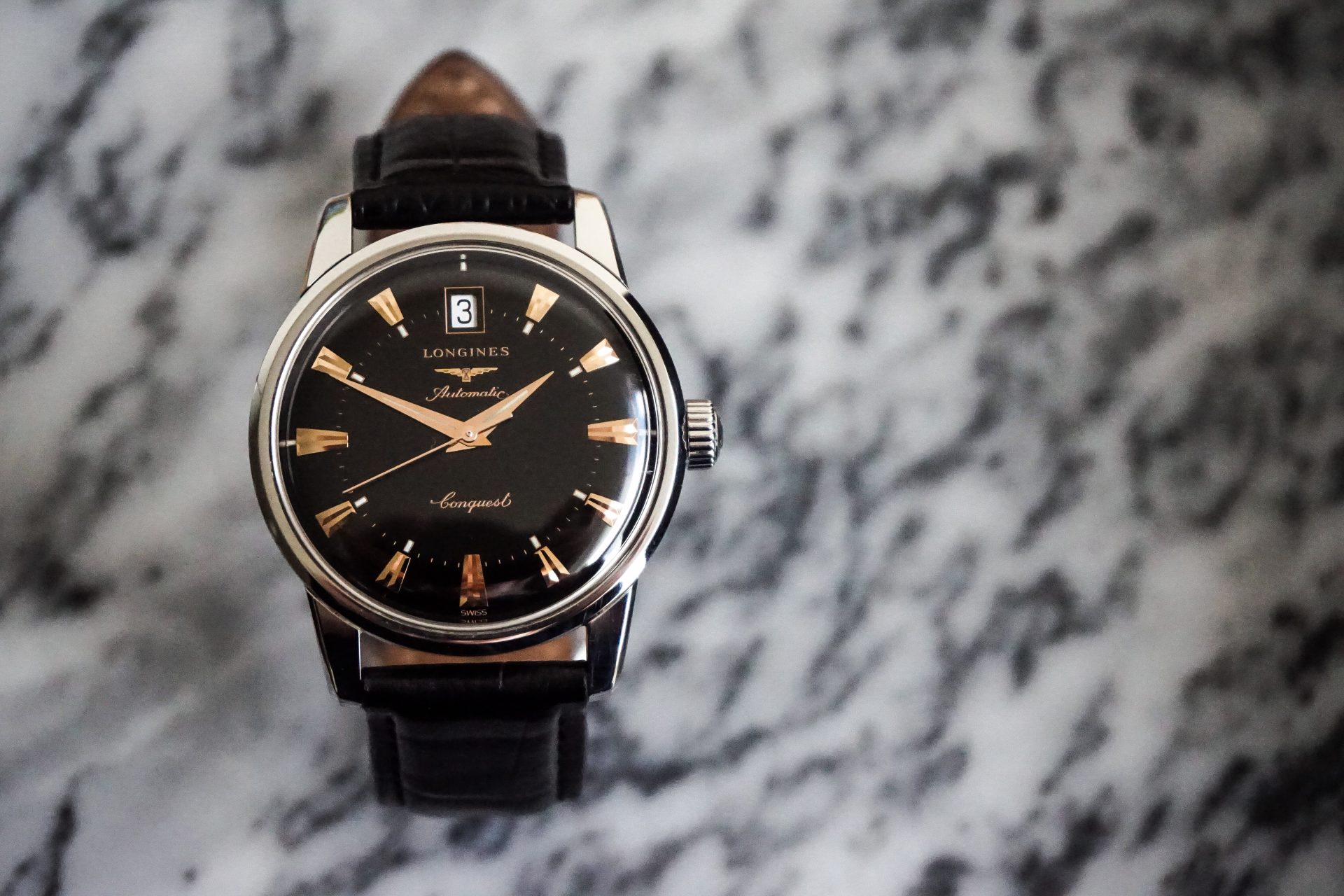 As you can see, the case is simple, but has some nice detailing.

The case back features a gold medallion at its centre, with a wave and star design that is highlighted with a rich blue enamel. On the originals, this design was a fish with green enamel, but the medallion’s inclusion on this new model is a great little detail. 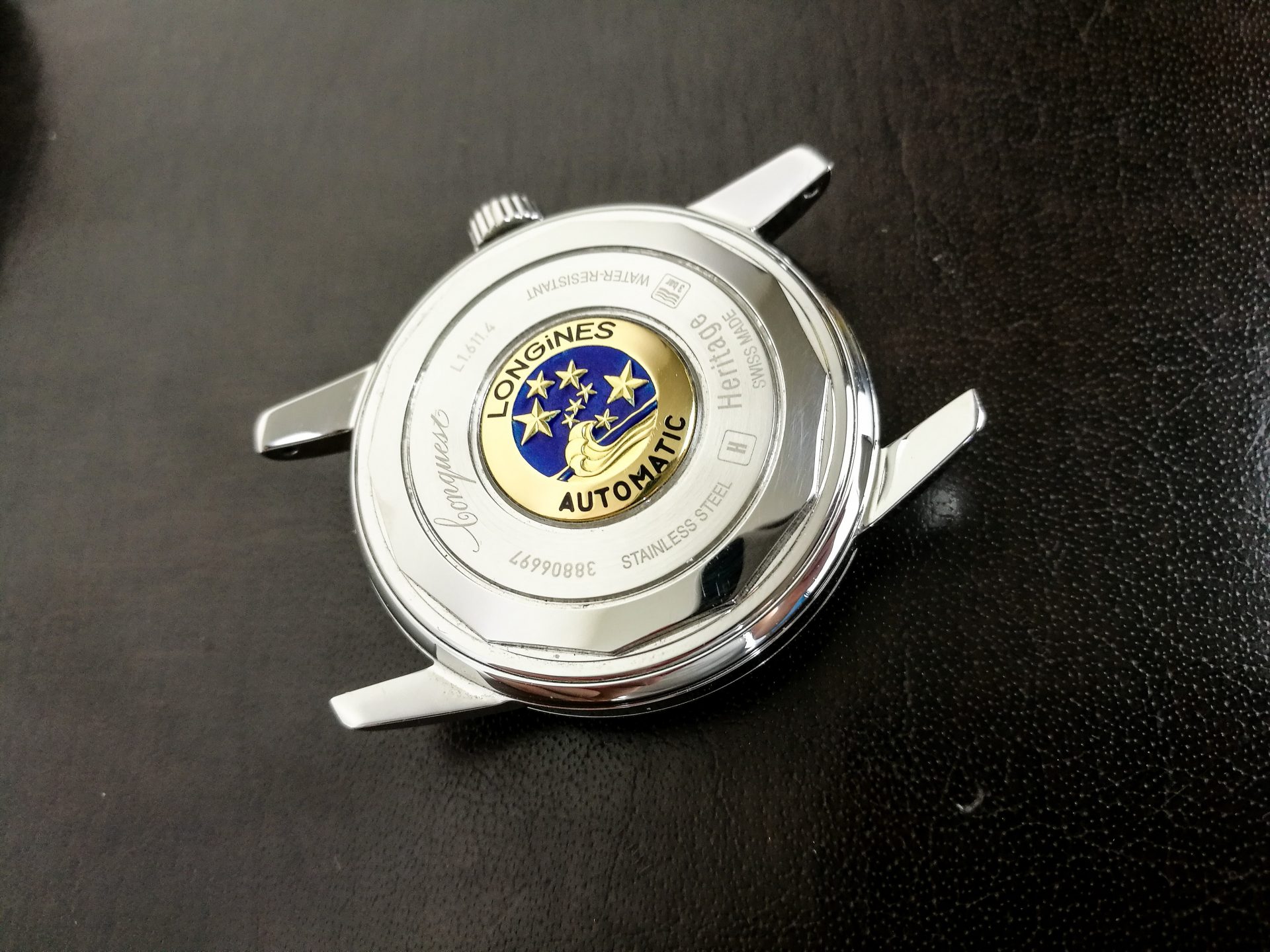 The caseback features a medallion at its centre, which adds to the vintage vibe.

Again, the crown is modelled after that found on the original 1950’s Conquest, and signed with the Longines name and logo. However, it’s so small that I struggle to wind the watch with it, which becomes pretty annoying after a time. Though this issue is only prevalent when winding, as once the crown is pulled out to set the time, the extra space allows for a better grip. 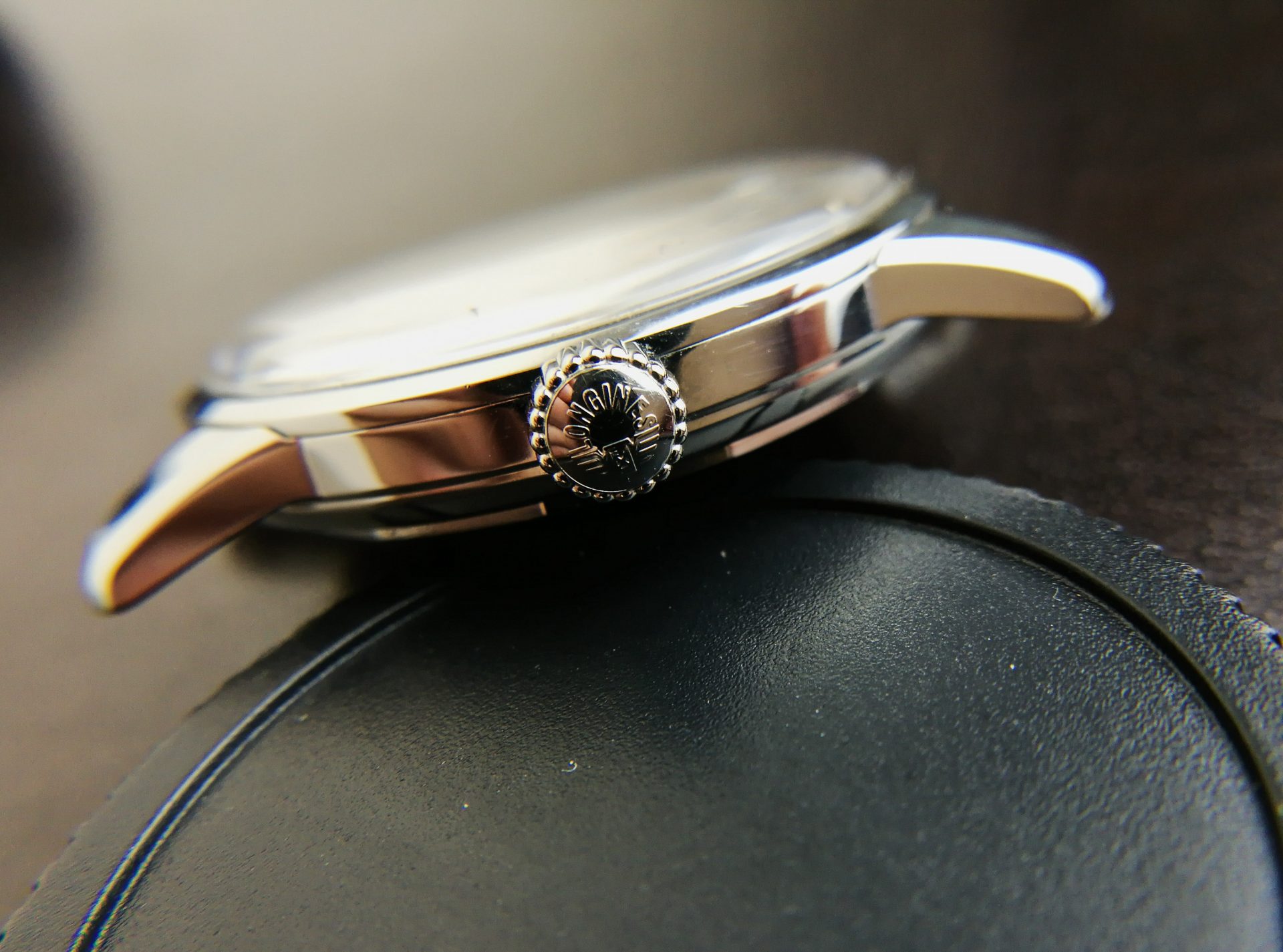 The crown is classic, but a tad small to be easily wound.

Longines opted to keep a domed acrylic crystal for this 35mm variant (the 40mm has a sapphire crystal). The dome adds to the vintage appeal and authenticity of the watch, but is reasonably reflective in sunlight. Though that said, given how dressy this watch is, it’s more at home at a winter black tie event than a summer garden party.

Now we come to what really sets this watch apart- the dial! This is what drew me to the watch in the first place. Its design is fairly simple, with few elements, but their execution is what raises them above your run-of-the-mill dress watch. Those faceted rose gold hour markers, set against the glossy black dial are superb. They have so many angles that they catch the light in a myriad of ways, making it the perfect choice of evening watch to take to that cocktail party – understated yet striking. The text and minute track are in gilt too, and very crisply printed, which is as you’d expect from this price point and brand. The Longines logo of the winged hourglass, the oldest horological logo in the world, is applied to the dial beneath the Longines name, and like the hour markers, it glints enticingly in the light. 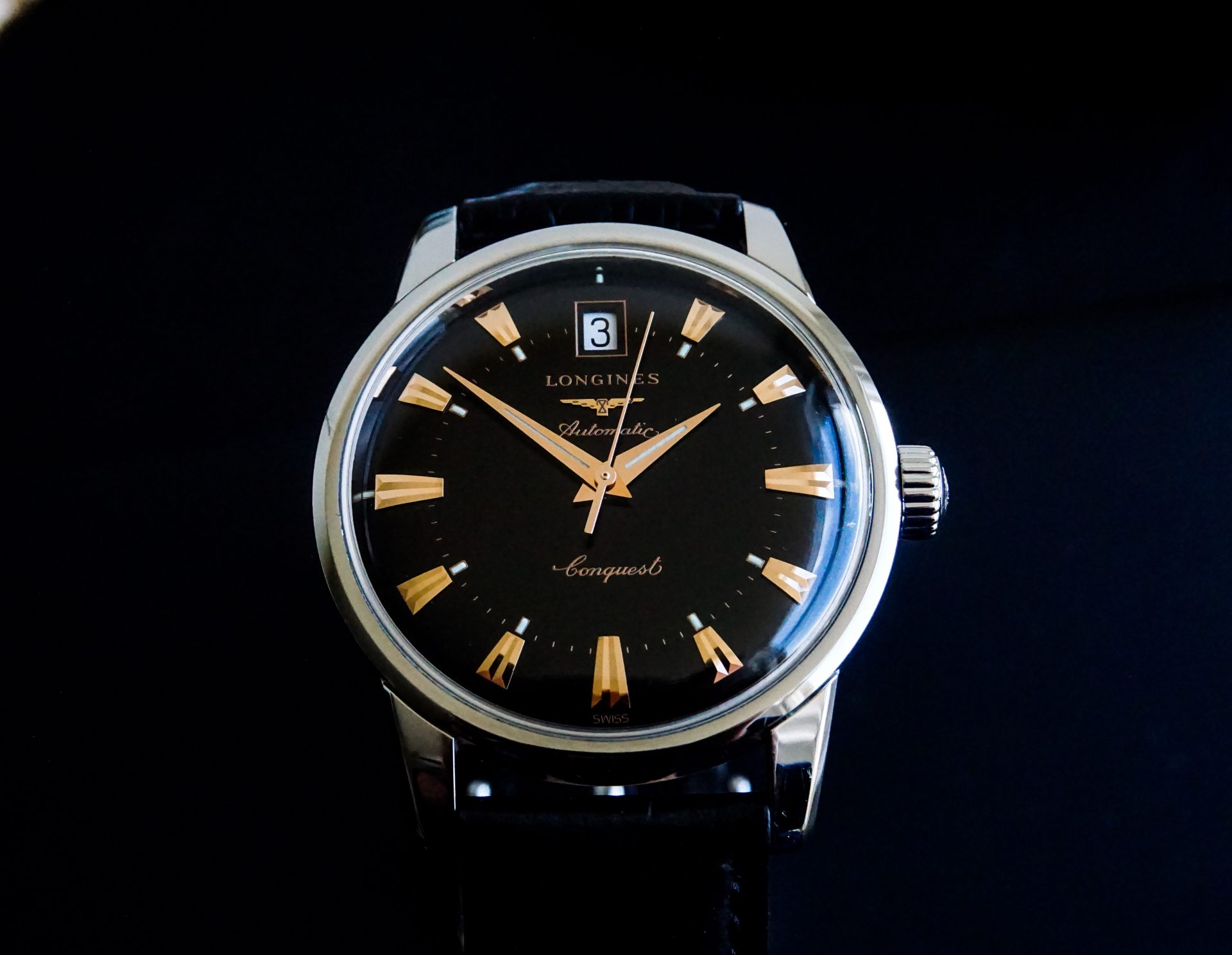 The dial is simply superb!

Lastly the date window can be found at twelve. An unusual choice, but one which draws the eye whilst maintaining the symmetry of the dial and not cutting short other elements. Longines also framed the edge of the window in a gilt rectangle and bevelled its edges, giving it a nicer finish than those found on more affordable pieces.

However, one thing I noticed is if you pull out the crown and wiggle it slightly, you’ll notice the dial move inside the case. It’s not the sort of thing you’ll ever notice unless you try it, but given that my £400 Hamilton doesn’t do this, it’s a disappointing failure in Longines’ manufacturing tolerances.

The rose gold dauphine hands are simple but refined, with thin strips of lume down their centres. The seconds hand is unusually short due to the minute track being inside the hour markers, and it just brushes their edges as it sweeps round. The hands are a relatively simple design, but their perfect finishing makes them sit very well within the design of the watch. Being a dress watch, the lume on the dial and hands is understandably minimal, but applied in an unusual layout inside the hour markers rather than on the dial’s outer edge. Despite the limited amount, the lume glows brightly enough in the dark. You’re never going to use this watch for strenuous activity either, so its presence on a dress watch is more of a bonus than an expected feature. The lume could be better, but is adequate considering how much of it there is.

The Conquest is available on an 18mm leather strap. It suits the watch’s dressy style, and to be honest I don’t think you’d want to put the watch on any other kind of strap. There isn’t much else to say about it to be honest other than it’s a perfectly good strap.

The Longines Conquest is powered by their calibre L633, which is basically a Longines signed ETA 2824-2. Seeing as this is the default Swiss automatic to use at this price point, and is found in so many watches, I won’t say too much about it as I’m sure most of us know its specs inside & out. It has 38 hours power reserve, 25 jewels, and beats at 28,800 vph. It has a proven reputation and its widespread use makes it easy and cheap to service. 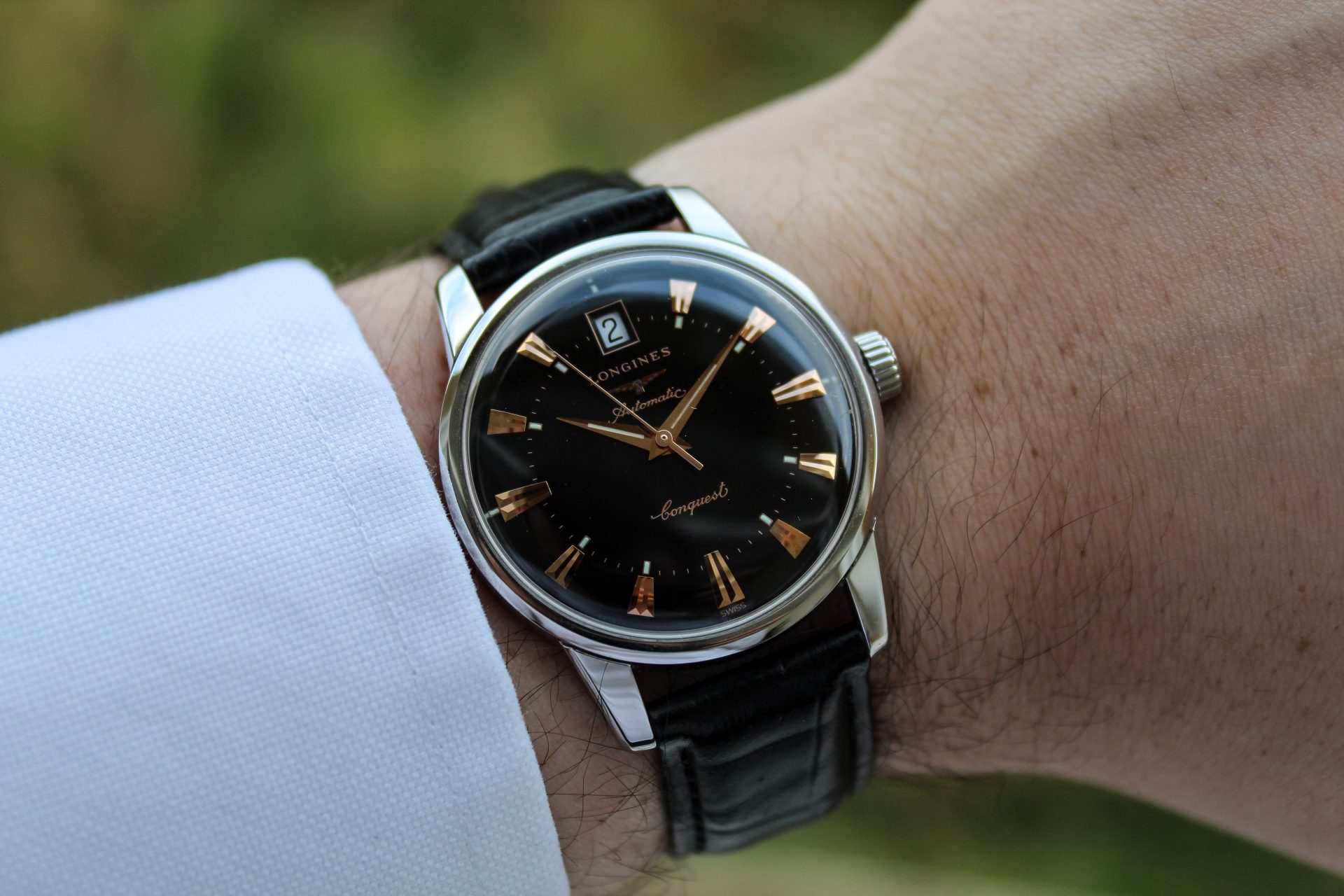 Despite its small size, the Longines wears well on the wrist.

In keeping with its dressy nature, the Conquest has a water resistance of 3 bar (30m). It’s a minimal amount that means you wouldn’t want to do more with it than wash your hands. But it’s not a tool watch, or even an everyday casual wearer, so it’s not something to be concerned about. You can buy the Conquest from any Longines Authorised Dealer in the UK for £810, which is a considerable price for a three hander dress watch. The value of this piece is clearly in the gorgeous vintage design, and the heritage of the Longines brand. With the price in mind, this watch is not for those who buy watches based on the specs they offer on paper. If you do that then this watch will seem sorely lacking – with an acrylic crystal, basic eta movement, and only 3 bar of water resistance. Instead this watch is for those who see it as more than the sum of its parts, and who love its classic, timeless design, and the heritage it draws on. Personally I think it’s the perfect example of a reissue done right, being almost identical to the original watch from the 1950’s. Its elegant aesthetics, slim case and smaller size make it the perfect dress watch for formal occasions, and its design is unique.