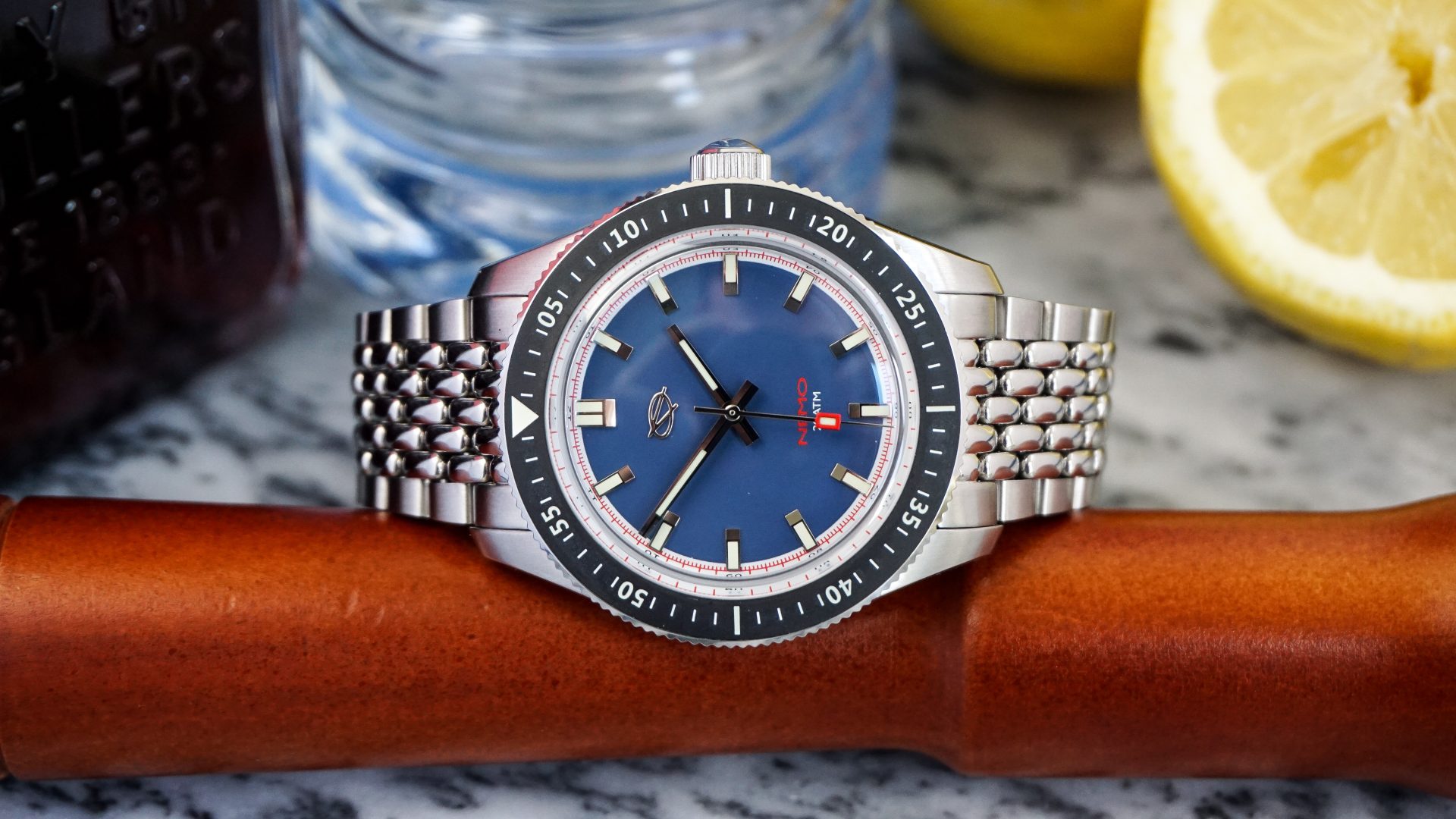 The market is awash with dive watches right now. It doesn’t matter how big or small the brand is, sooner or later most will offer their own diver. One of the problems with such prevalence is that you tend to get a lot of pieces that don’t offer anything solid in terms of value proposition. A lot of microbrand divers these days are charging way over $500 for a Miyota powered piece, and for me they’re just too much (unless you really like the design). Which is why when I saw what EMG had done with the Nemo it was a breath of fresh air. A high beat miyota, sapphire domed crystal, and ceramic bezel for $450? Bargain!

For those who don’t know much about EMG, it was founded in 2016 by two WatchUSeek members, Eric Goodlock and Derek Love. Last year they collaborated with another member, Ed Tse (aka HKED) to produce the EMG/HKED Nemo. On a side note, the case and bezel were also used for last year’s Watchuseek F71 project watch.

On the face of it, it bodes well that this watch was born from the passion of three active members of the Watchuseek community. But how does the Nemo really stack up? Well, lets’ find out…

The EMG/HKED Nemo offers a great package for the price!

The case of the Nemo is strongly influenced on the cases of vintage skindivers from the 1960’s, with a very classic look. I must admit, when I first saw pictures of the Nemo, I was worried that the case finishing didn’t look that great. However, when the watch arrived I was very pleased to find that the finishing was very good for an affordable piece. The changes between the brushed lug tops and polished sides are very crisp, and both finishes are well done. On another note, the lugs are drilled for quick strap changes, which is always a welcome touch. 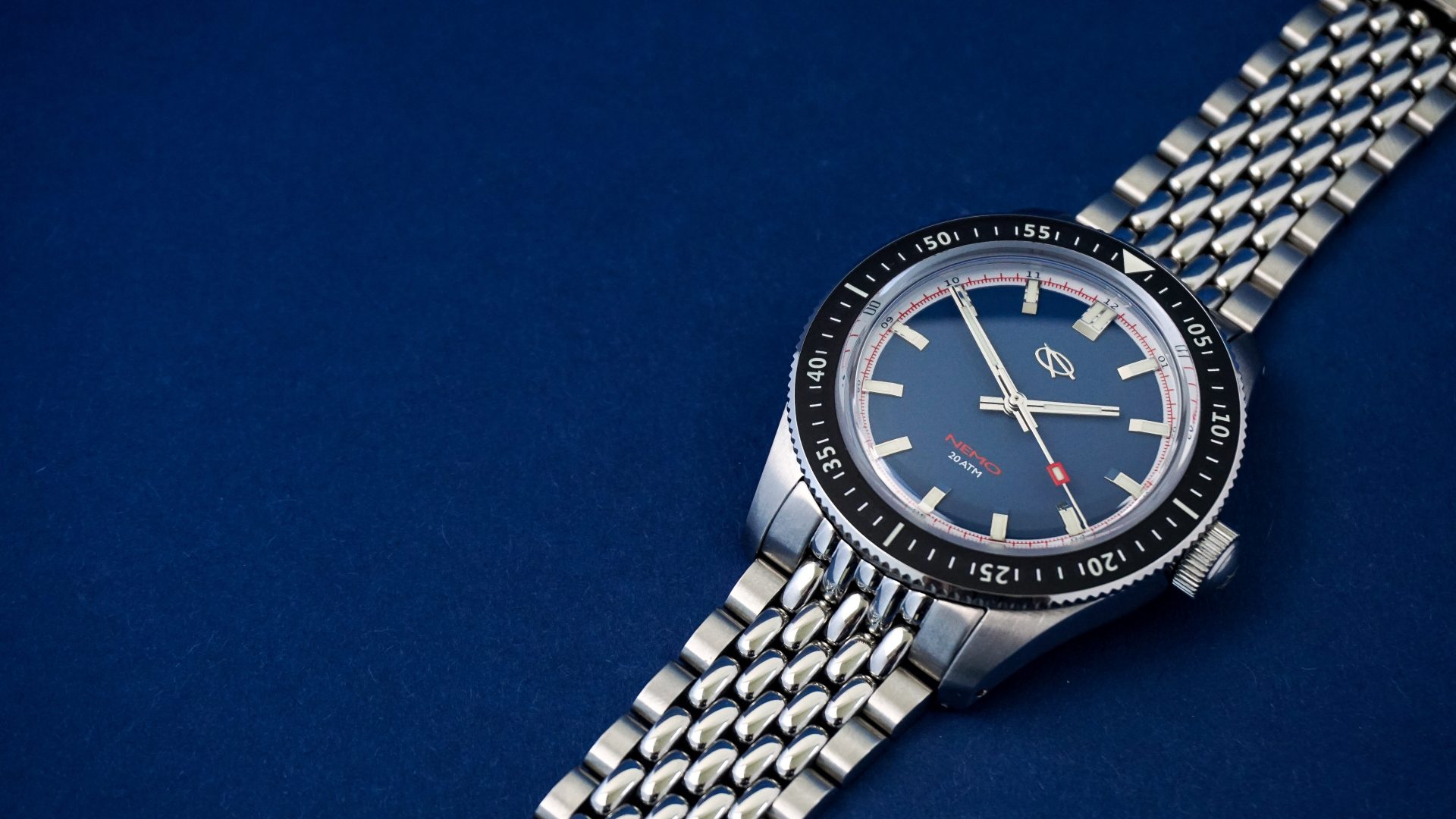 Personally, whilst the Nemo is a great size at 40mm, I think the lugs should be a bit longer. Currently I think the lugs look a bit stubby for the case, whereas if they were a couple of millimetres longer they’d look more like the vintage divers on which they’re based (and be more balanced). If you compare it to a vintage Titus Calypsomatic, which is 37mm, they both have the same lug to lug of 47mm. That’s just my personal taste though. If you’re happy with the proportions then don’t let me put you off! EMG’s Nemo is 13.5mm thick, which is fairly average. It’s not too tall though, and I had no trouble fitting it under my shirt cuff.

Flipping the watch over we see that EMG/HKED stamped a really cool squid design on the caseback. It’s a great touch that really raises the quality of the watch in my opinion. If there’s one thing that makes a watch feel like a microbrand watch, it’s a cheaply marked caseback! 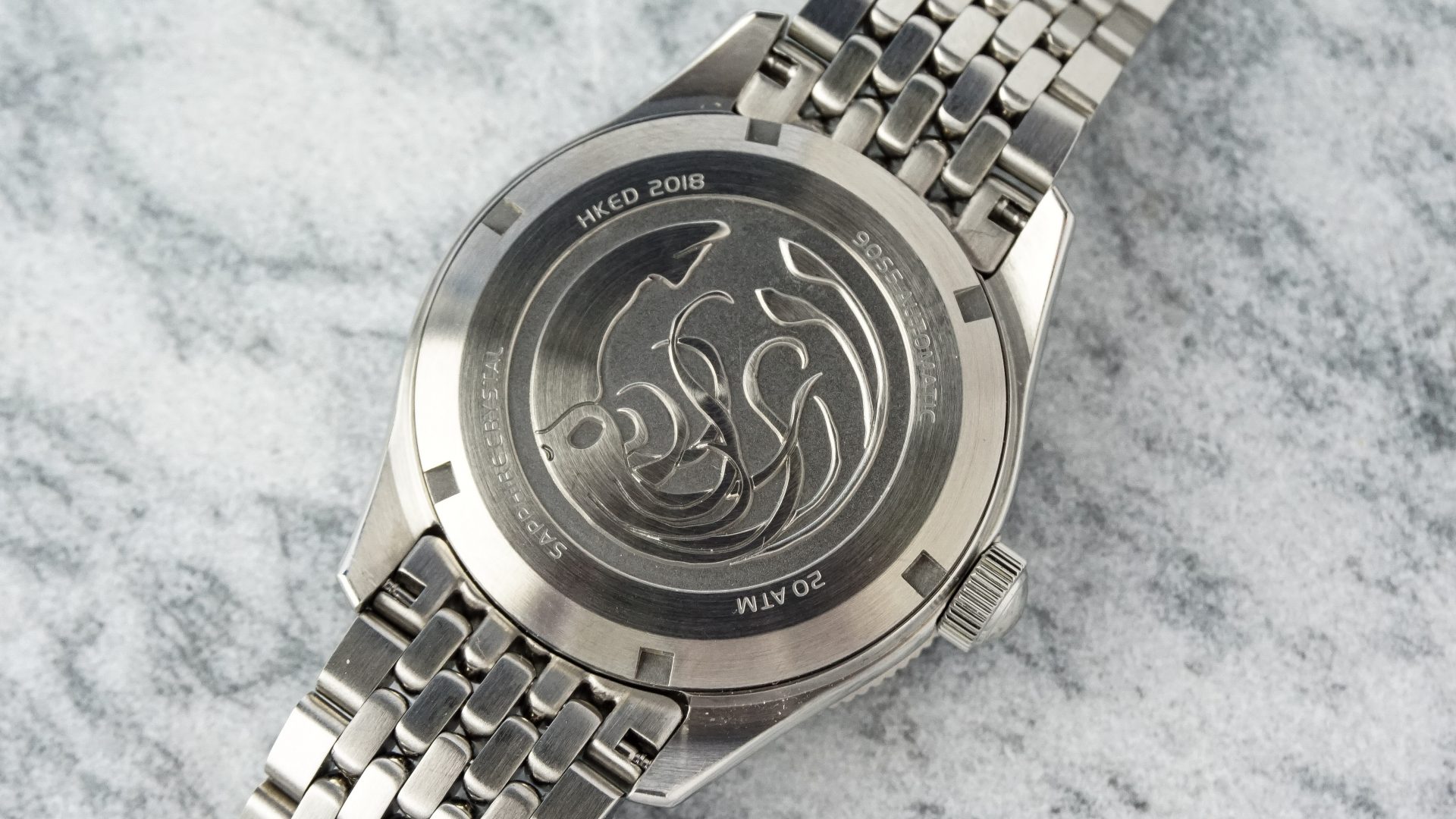 The bezel of the Nemo has 120 clicks and a fully lumed matte ceramic insert, which is a very nice touch at this price point. It’s also very cool to see a matte ceramic finish, as it keeps the watch looking toolish. The bezel has very little play indeed, something which is must for me on a diver. However, it is sadly very hard for me to turn when the watch is on the wrist. I like a tight bezel as much as the next man, but if you can’t easily use it you kind of defeat the point.

Similarly, the screw-down crown is a tad difficult to unscrew at first. Once unscrewed, I had no problem winding the watch or setting the time, but the bulk of the crown sits so close to the case that it’s hard to grip. 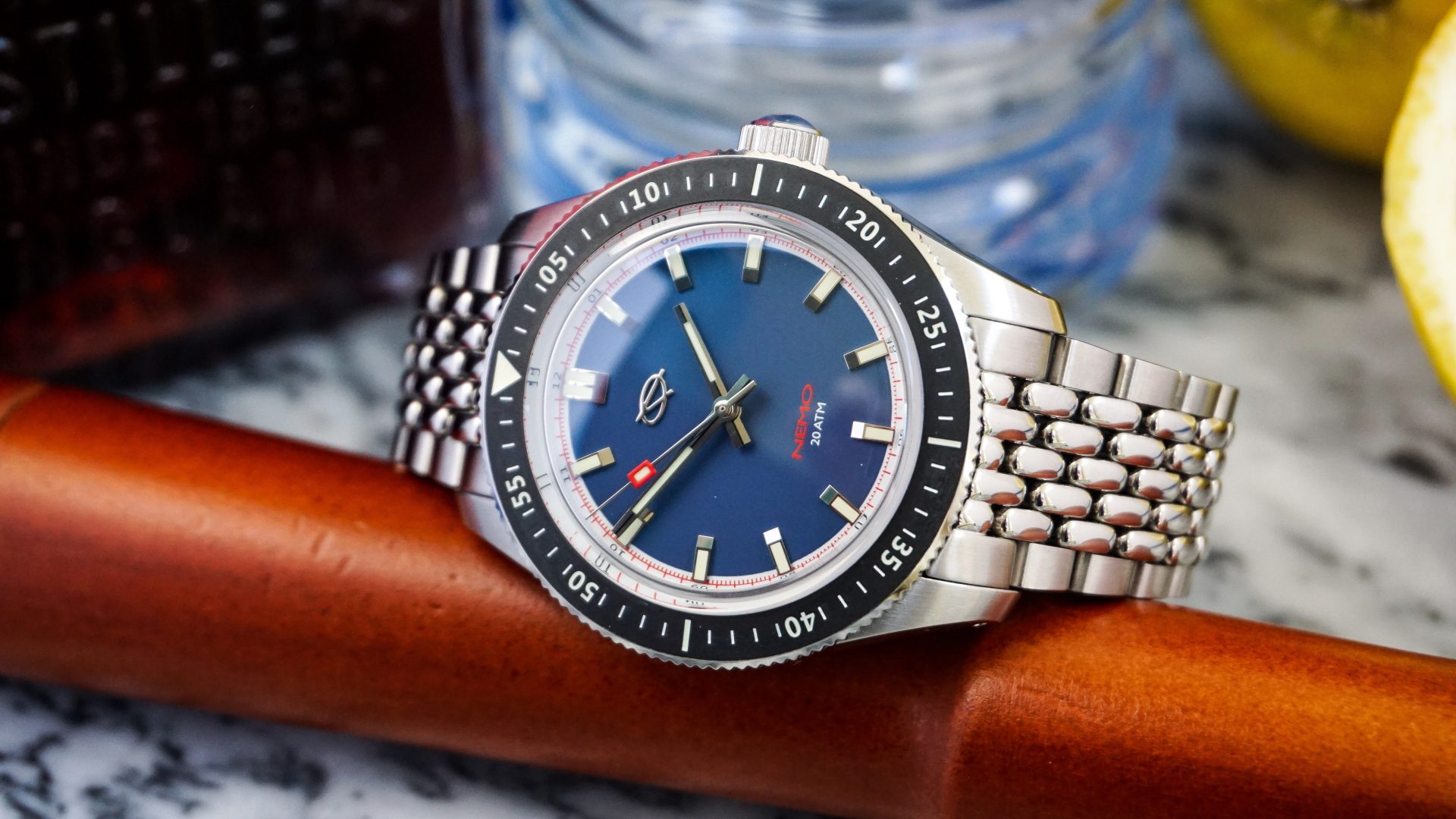 The design of the Nemo has some vintage vibes, but is very much original.

A domed crystal is the only choice for a watch like the Nemo, and kudos to EMG for using a sapphire one to boot. What’s more they put a multi-layered anti-reflective coating on the underside. Overall I don’t have much more to say about the crystal, simply because I can’t find fault with it. There’s little glare, and the domed effect gives the usual little bit of distortion that I find rather charming. 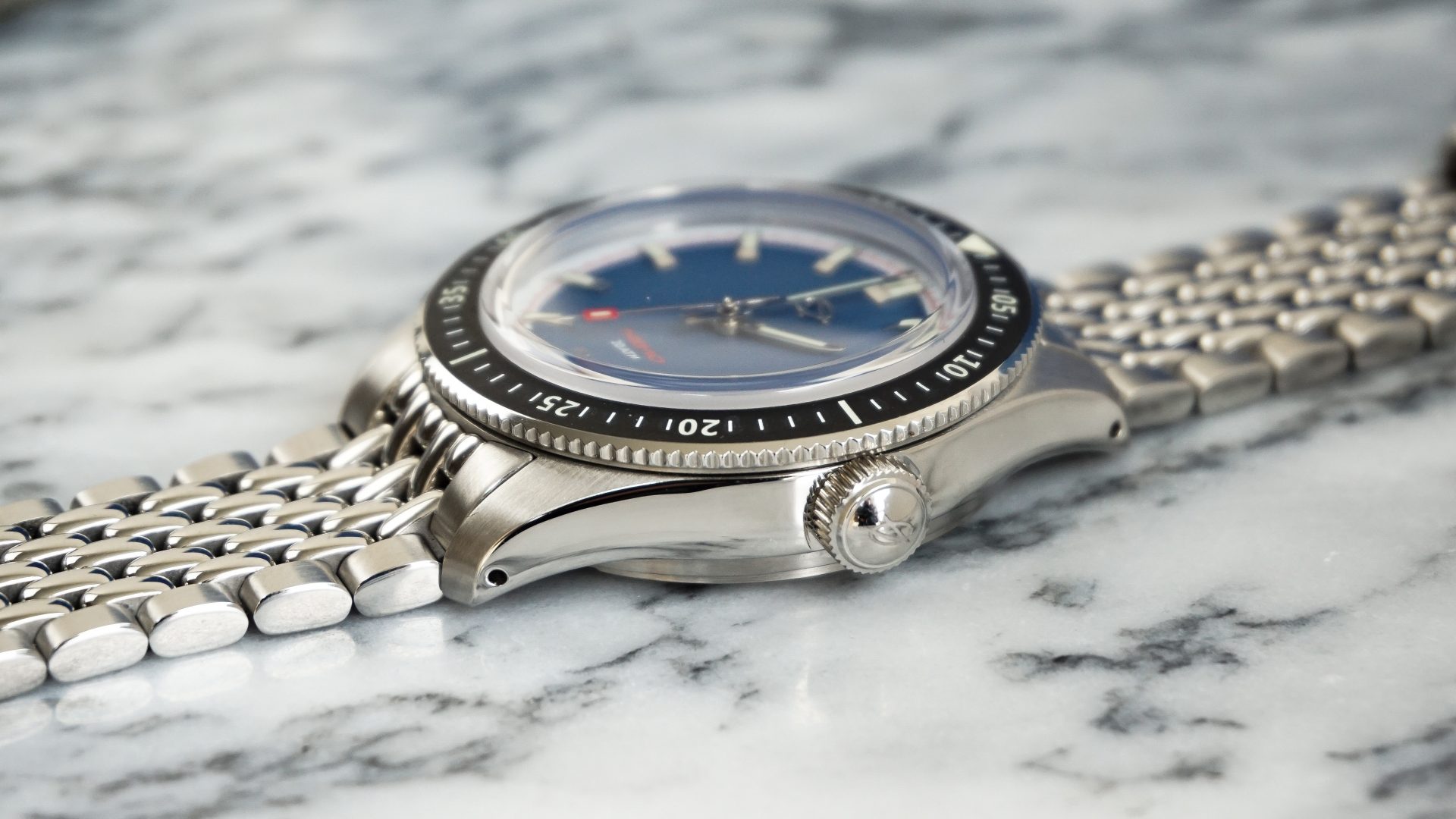 I’m pleased to see that EMG opted for an original design for the Nemo’s dial. Whilst typical in layout, it’s not a direct copy of any previous design that I can recall. I’m also a fan of the fact EMG offer 6 different colour options for the face, including some more unusual choices like yellow and powder blue. This particular shade is called “denim blue”, and to my eye it lives up to its name as it matches my jeans pretty well! The dial itself has a matte finish that contrasts nicely with the polished slanted hour markers, and the red minute track with a white background frames this perfectly.

The hands themselves are fairly simple, but the hour and minute hands have a black line down the centre that to me makes them feel very 1970’s. Similarly the seconds hand has a bold red rectangle near the tip that has the same effect. Looking at all this together, it’s vaguely reminiscent of a vintage diver, but the overall look is rather modern. You certainly don’t get the impression that this is a lazy homage, and the design itself is not one you’ll confuse with anything else on the market. 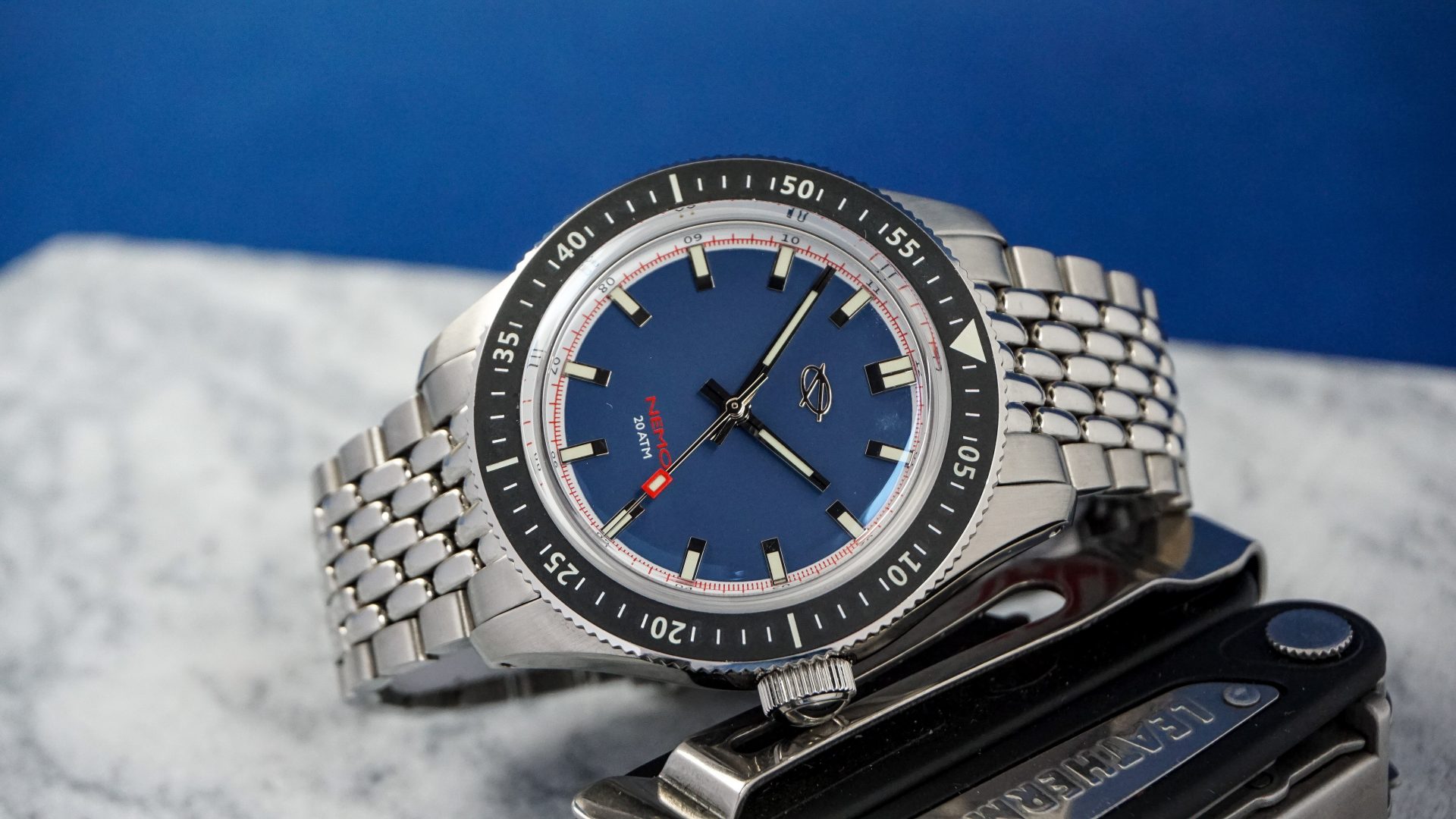 The hands and markers of the EMG Nemo are filled with Super-LumiNova C3 X1, which is the brightest available Super-LumiNova (according to the trusty chart that circulates the interwebs). As a result, despite the fairly small amount of lume on the watch, it’s unusually bright in the dark. I’ve got to tip my (metaphorical) hat to EMG for not skimping out and using a weaker grade lume like some of their competitors. It’s a corner that’s too easy to cut, and the fact EMG went the full mile is a very telling demonstration of their dedication to quality. You wouldn’t think such small markers would glow slow brightly, but they do.

EMG chose the Miyota 90S5 automatic movement for the Nemo. Most of us will be familiar the Miyota 9 series movement as they’re a favourite amongst microbrands. For those who haven’t come across the 90S5 and its family before, it’s a great affordable alternative to the ETA2824 and its Swiss derivatives. The 24 jewel movement beats at 28,800 bph, and has a healthy 42 hour power reserve. It also hacks, hand winds, and has an accuracy of -10/+30 seconds per day. All in all the Miyota 90S5 is a reliable, solid movement for an affordable diver such as the Nemo.

To be honest, I think the bracelet on the Nemo is one of my favourite parts of the entire watch. I’m a sucker for a beads of rice bracelet, and this one is rather nice indeed. It’s incredibly comfy on the wrist, as all beads of rice bracelets are, due to its flexibility. The end links also fit snugly into the case, and the links are fixed with screws, which are far easier to remove than pins. Lastly the clasp is of a decent, though not outstanding, quality. That’s fine for a watch that’s just $450, and the addition of the squid emblem is a neat detail. 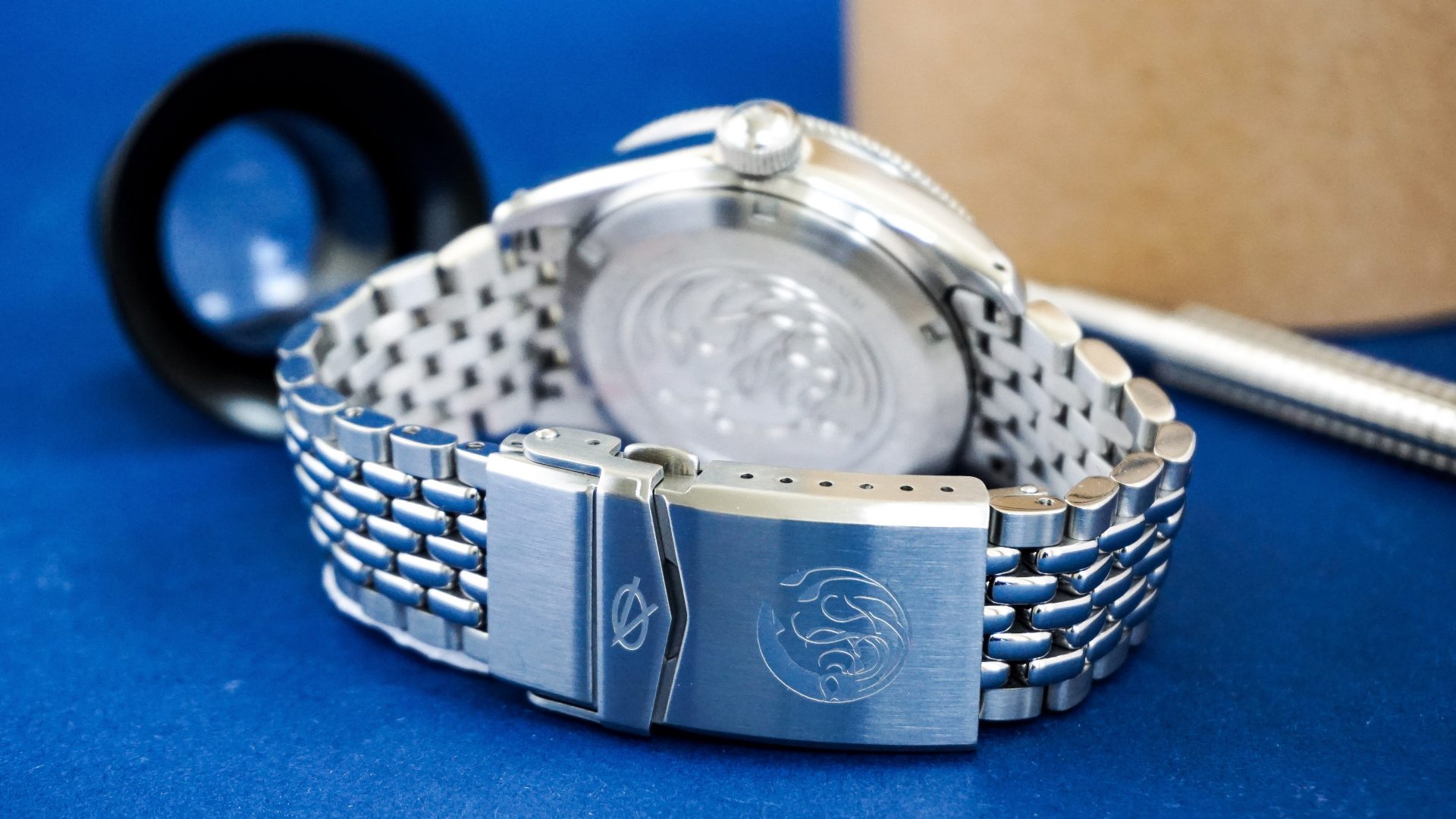 The beads of rice bracelet is soooo comfy.

I don’t think there can be any argument that the EMG Nemo offers a damn fine value proposition. Is it perfect? No, but it’s certainly well built, and you can hardly complain about the package you get for your cash. AR coated sapphire crystal, Miyota 9 series movement, 200m WR, Super-LumiNova C3 X1, and a ceramic bezel. These are specs that you’d expect to find on a watch that’s two, maybe even three, times the $450 the Nemo costs.

Cramming all that in to the Nemo is a big achievement on EMG’s (& HKED’s) part, and I applaud them for it. Whilst I think the bezel and crown could be easier to use, these are ultimately minor complaints. So, if you’ve fallen in love with the look of the Nemo, I’d certainly pick one up because you won’t be disappointed in the quality.

You can buy the EMG/HKED Nemo from EMG’s website here.