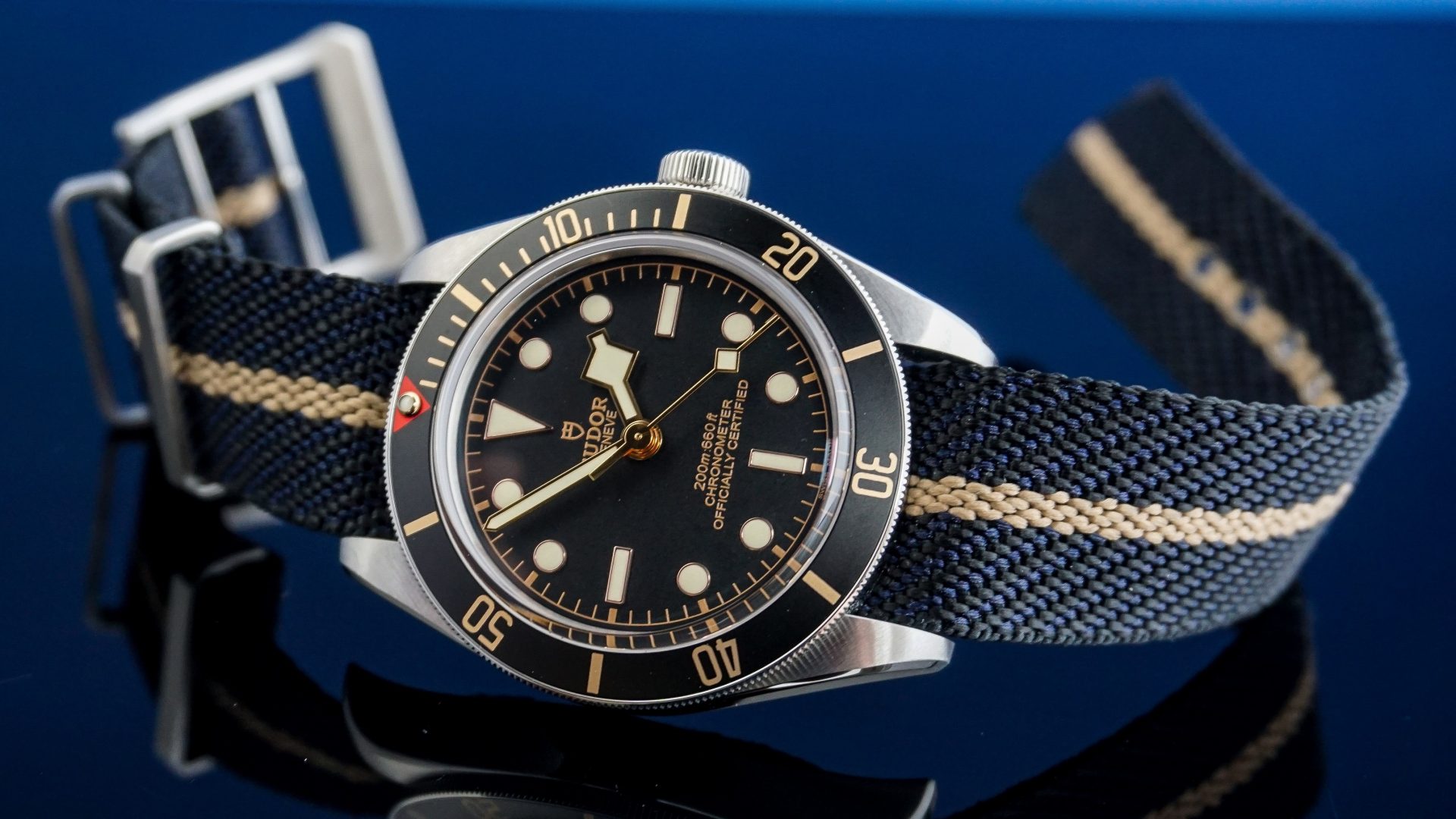 I have to confess that myself, like a lot of watch nerds, hate spending lots on a watch strap. Despite happily having watches worth hundreds, if not thousands, from luxury Swiss brands many of us wouldn’t dream of spending the money the same brand asks for a leather or fabric strap.

However, every once in a while a strap comes along that looks so good I just can’t resist splashing some cash on it. This time it was Crown and Buckle’s Chevron Strap. I was after a strap for my new Tudor Black Bay 58, and though Tudor tout that theirs are woven by French pixies using the Jacquard technique, I was unwilling to pay the premium.

The Chevron strap from Crown and Buckle seemed to be a great alternative, especially as they offer a colour scheme nearly identical to Tudor’s- the Night & Harvest. What’s interesting about the Chevron is that it’s not a NATO strap, but a single pass strap that’s more like a beefier perlon, again just like Tudor’s fabric straps.

It goes without saying that I was tempted enough to pull the trigger, so I paid my $32 plus $7 shipping and a week later the strap arrived. At this point I should mention that I was stung by customs and had to pay an extra £13.95 ($16.96) in fees. So with the exchange rate as bad as it is for the Pound, I ended up paying a fair bit for the strap. 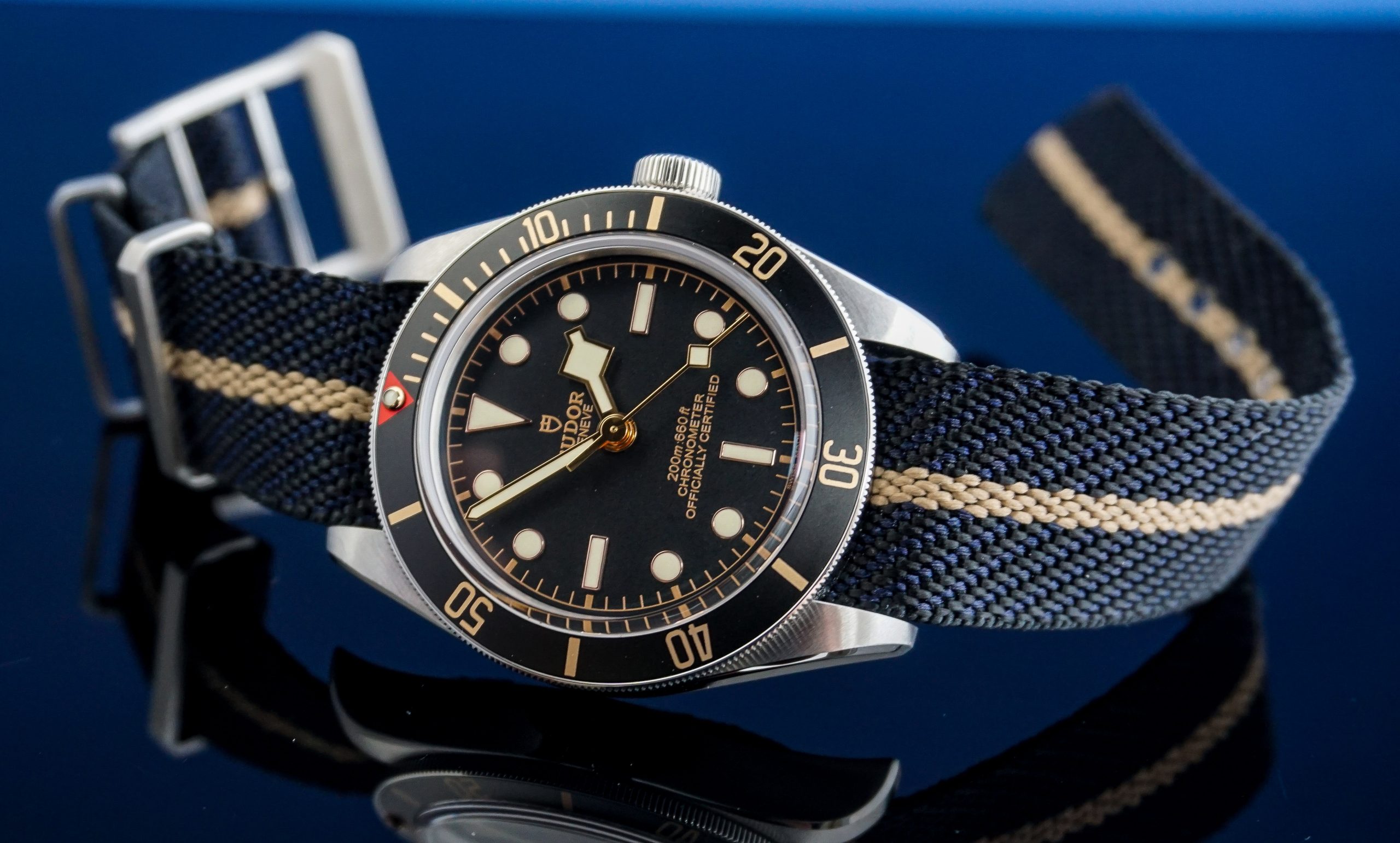 A cool design choice from Crown and Buckle was to interweave both black and blue nylons, which creates a subtle depth of colour. It’s not until you start to look closely that you realise that there are two shades. The cream stripe running down the centre helps keep things interesting, and when paired with the right watch (such as my Black Bay 58) it accentuates the matching colours.

The nylon weave itself is super tight, and very uniform. To prevent the end from fraying Crown and Buckle had it reinforced with a stitched edge, rather than just heat sealed. It certainly looks the part of a premium strap, and the overall the feel is very nice with very little give in the fabric. Overall I’d say it strikes just the right balance between durability and smoothness. 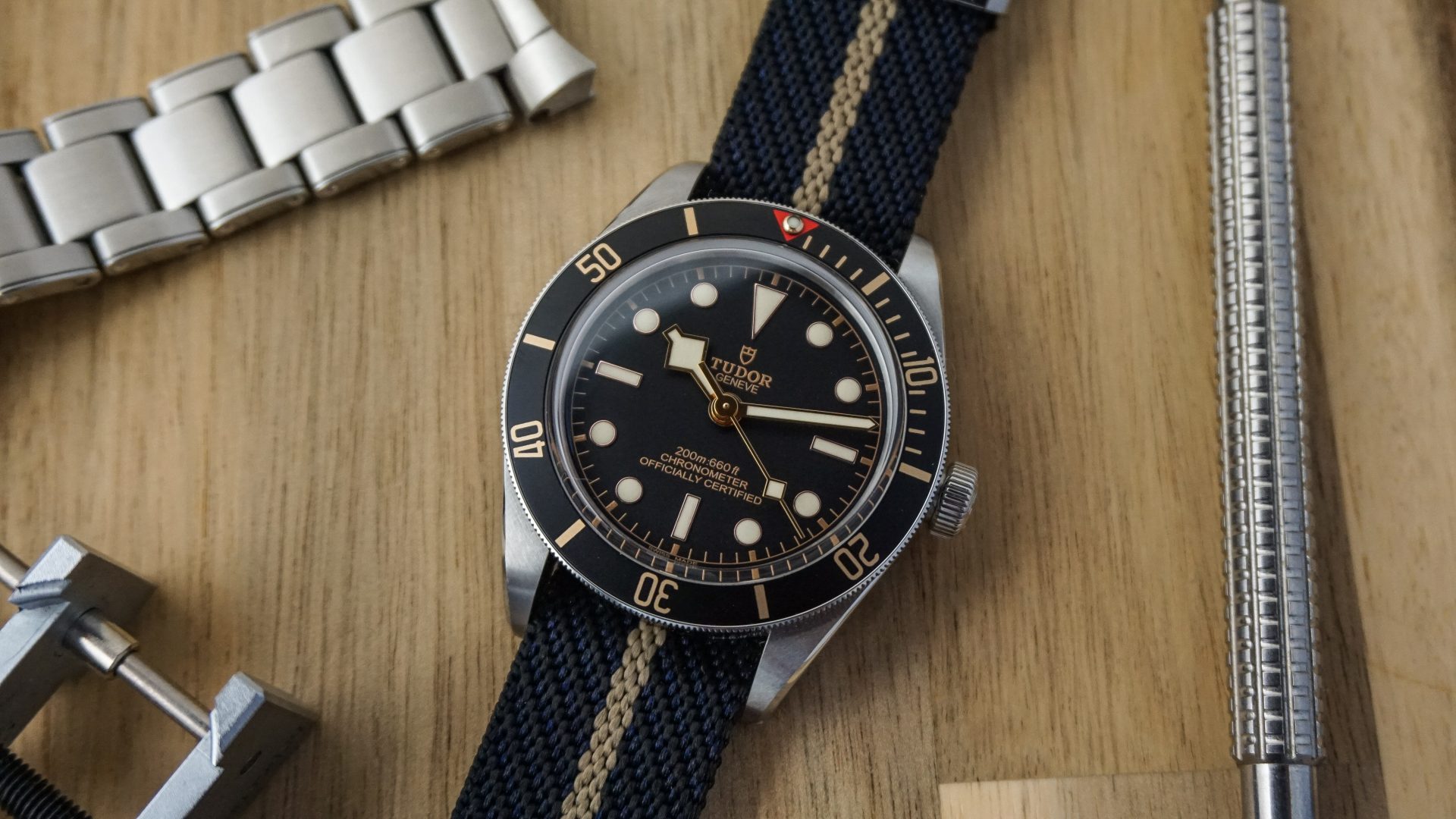 The nylon weave of the Chevron is super tight.

The hardware is naturally made from 316L steel and feels satisfyingly solid. I went with the polished hardware (because brushed was out of stock) and the finish is very good indeed. The angled keepers are nice and crisp, and the buckle is slim but solid.

If I had to nit-pick though, I wish the buckle had and indent to keep the buckle tang in place. As it stands the tang sits on top of the buckle and can be caught and bent back, though this isn’t too likely to happen during every day wear. 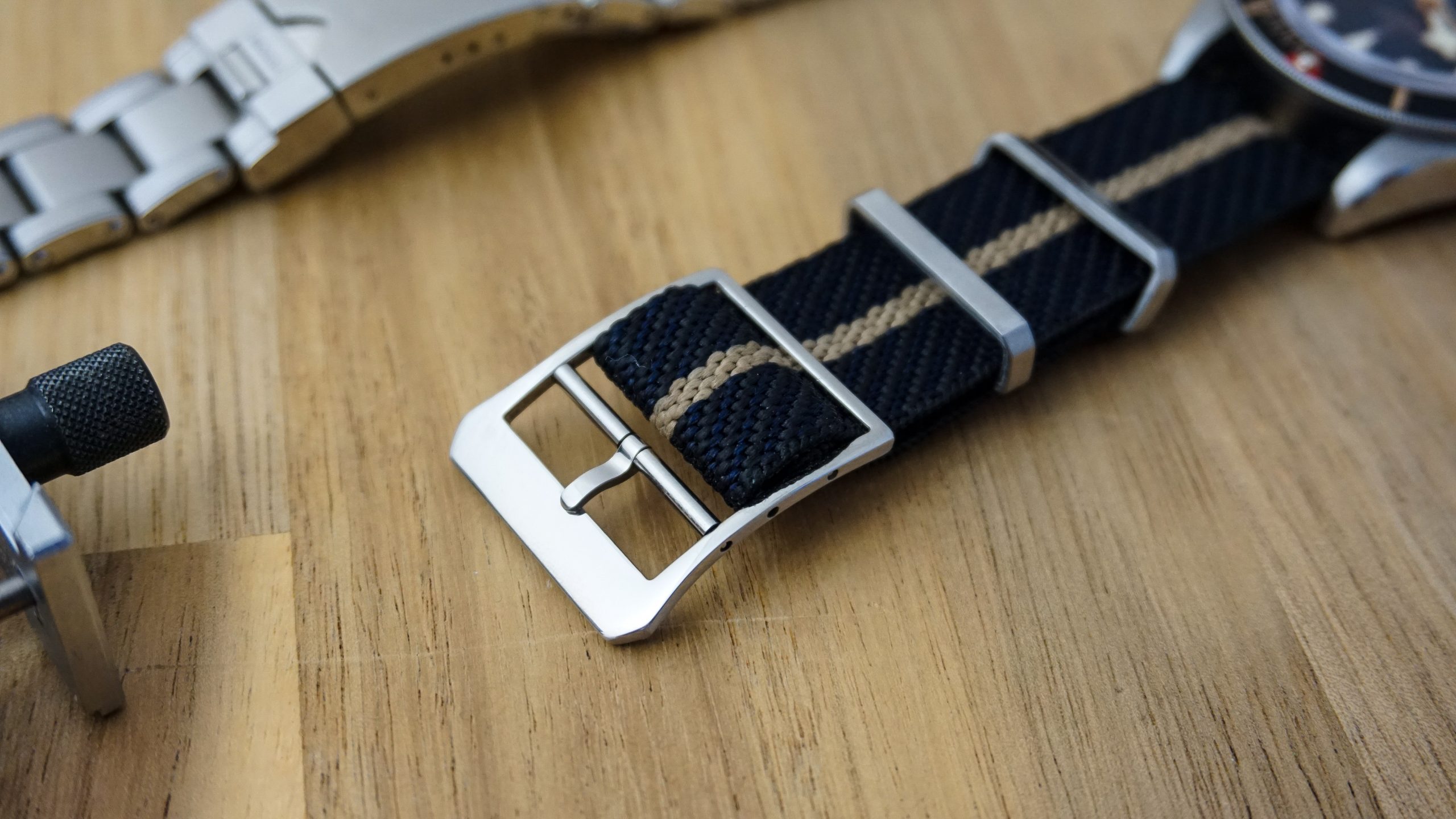 So at this point you’re probably asking “how does the Crown and Buckle Chevron feels on the wrist?”

Well, as you might expect, it’s supremely comfy to wear. Because it’s a single pass strap it keeps the watch nice and close to the wrist, unlike a NATO, which can add a fair bit of height. It’s a little finicky to adjust the length at first, but once set you’ve no need to change it.

To be honest, I found the fixed keeper to be useless. Even wearing mine on the tightest hole the excess just barely touches it. I just tucked it back into the floating keeper like I would on a NATO. It’s obviously not a real problem, and overall the Chevron feels great on the wrist. 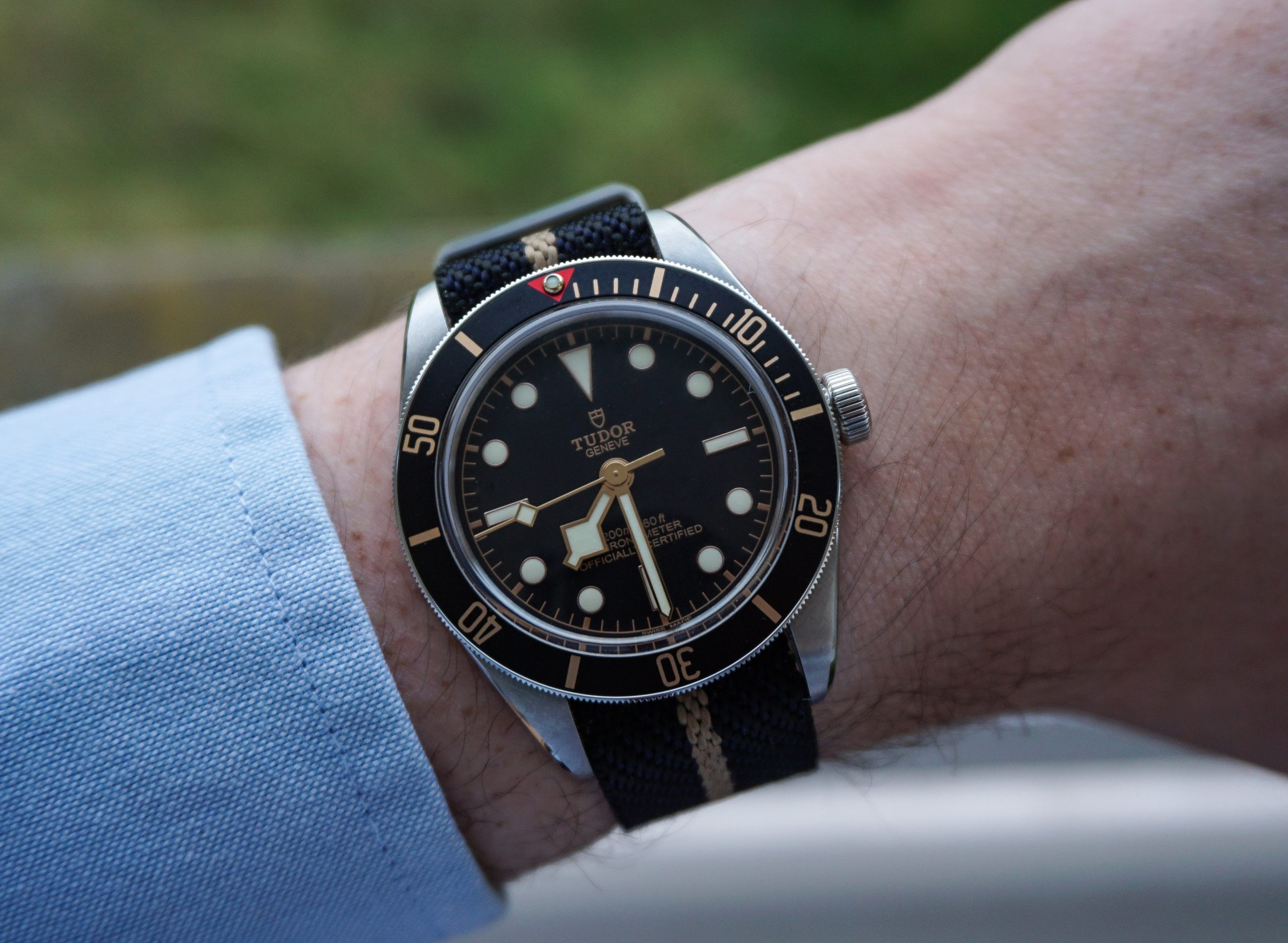 The Chevron is very comfy to wear and is a great option for hot weather!

Personally, I think that Crown & Buckle have done a superb job with the Chevron. It’s a bit different from other straps on the market, and you get an instructional diagram with the strap that talks you through adjusting it. Once you’ve figured it out it’s pretty simple, and you won’t have to worry about resizing. Sure, the Chevron is not the cheapest strap on the market, but the material and hardware both feel great. I’m also a big fan of some of the colour options. It would be all too easy for Crown and Buckle to stick to just the basics, but by interweaving too colour fabrics they’ve kicked things up a notch. 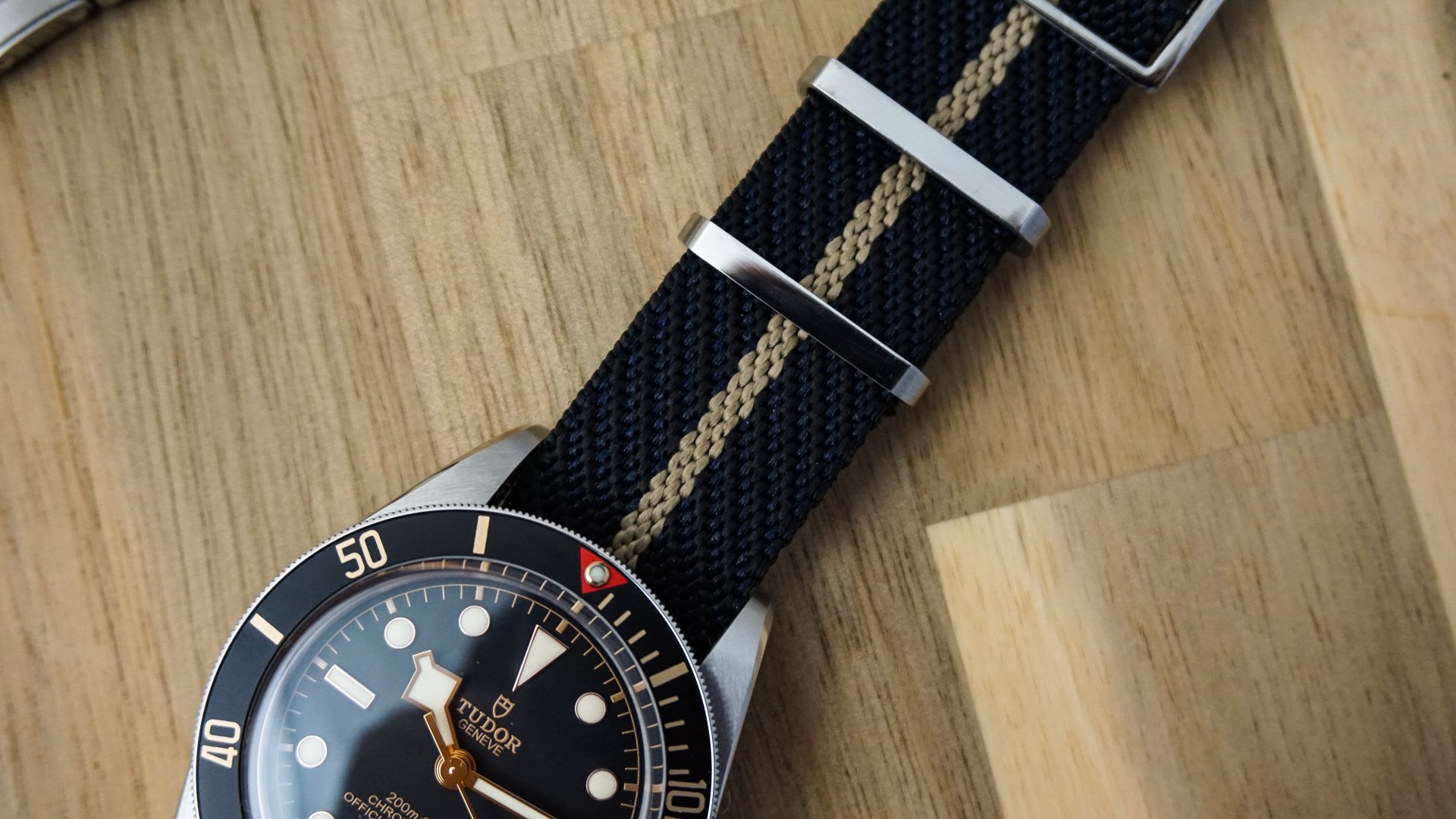 The Chevron can stand toe to toe with other premium straps.

You can purchase the Crown and Buckle Chevron in either 20mm or 22mm and in a variety of colours and hardware finishes from Crown & Buckle’s website here.

Not convinced by Crown and Buckle’s Chevron? Why not check out my other strap reviews?