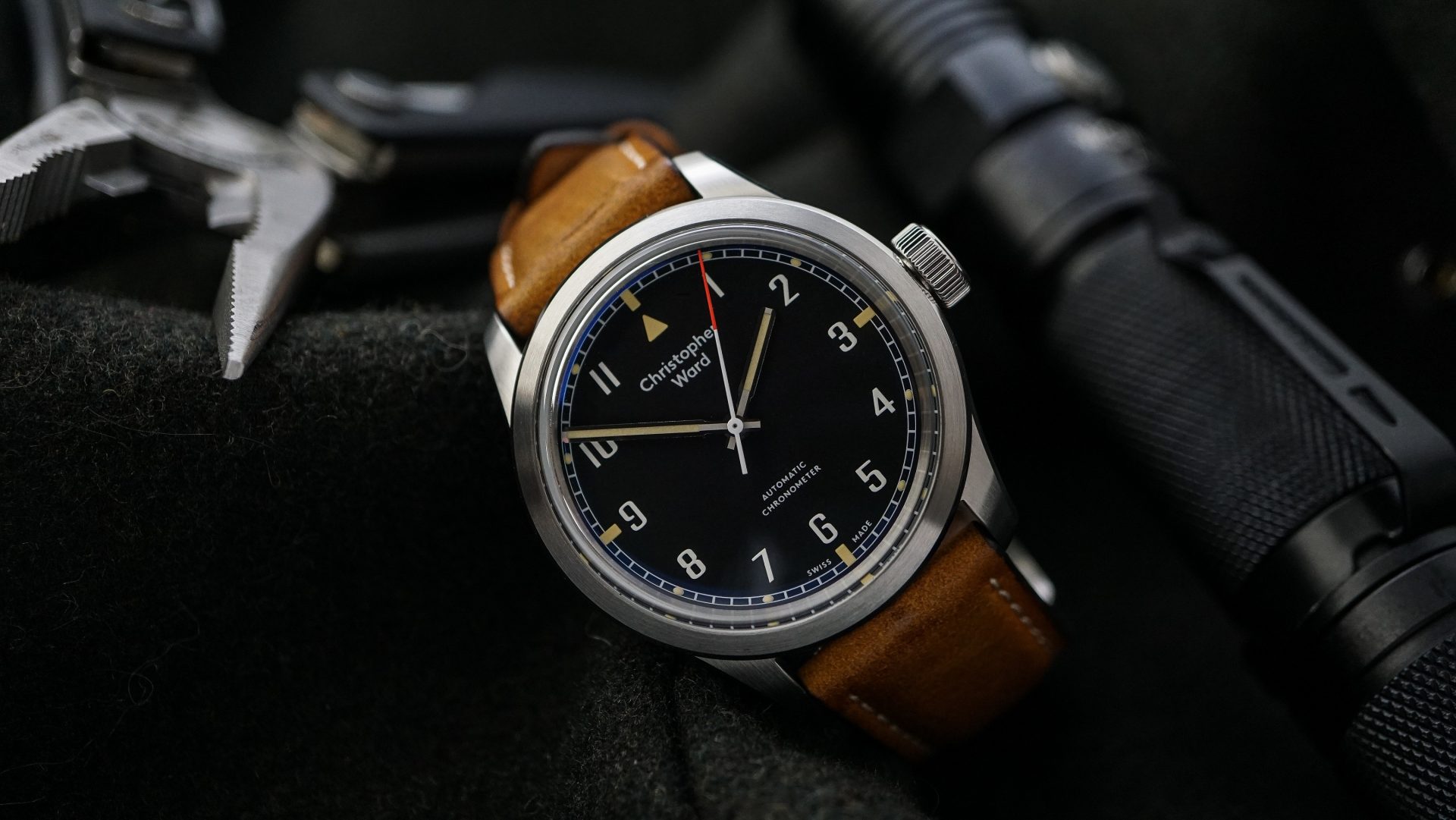 Like most elements of fashion, the military has greatly influenced watches over the decades. Perhaps the most obvious examples are field watches, those basic rugged pieces designed to provide accurate time keeping for the average soldier.

It’s a style that’s been produced by many brands over the years, and Christopher Ward are one of the latest to dip their toe into this niche. Approved by the British Ministry of Defence, the C65 Sandhurst is Christopher Ward’s version of the humble field watch, and is of course named after the famous Royal Military Academy in Berkshire.

It’s a loose interpretation of the iconic Smith’s W10 (who’s reissue I reviewed last year), the field watch issued to the British Army between 1967 and 1970. The Smith’s is now one of the most iconic military pieces out there, so it’s unsurprising that Christopher Ward chose to homage it.

Anyway, if you’re considering buying the Sandhurst, you must be asking yourself “what’s this got that other field watches don’t?” Well, let’s take a closer look and see what sets the C65 Sandhurst apart from the competition.

Like the rest of the military collection, the Sandhurst has been made with the full approval of the Ministry of Defence.

The 38mm steel case is the same as they use on the C65 Trident Vintage MKII. It’s part of Christopher Ward’s latest generation and dubbed the “light-catcher”, thanks to the contrasting mix of brushed and polished finishes. Personally I think it’s one of the best aspects of the watch. The finishes themselves are flawless, and I adore how the light plays across each. And, most importantly, the overall look is still toolish, but there is a touch of formal refinement to it. I guess what I’m trying to say is that the case design strikes a perfect balance between form and function.

Christopher Ward have always made very nice casebacks, and the one on the Sandhurst is no exception. At its centre is the heraldic badge of the British Army, which is engraved nice and deeply. And, though it’s relatively simple I think it looks great! 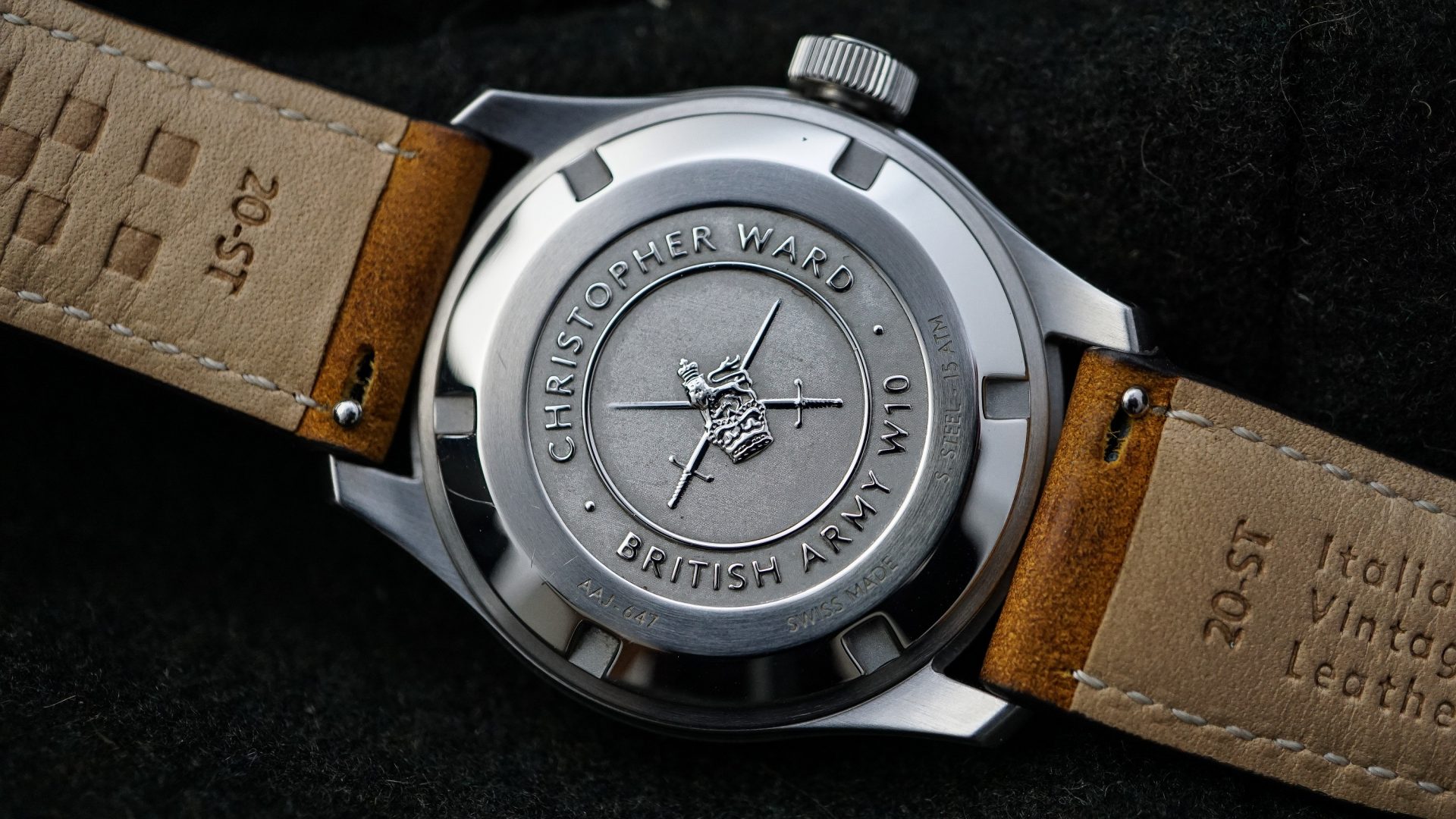 Despite the crown only being a push-in one, it too is nicely finished. The Christopher Ward twin flags logo is stamped on crisply, and they’ve added a cool extra detail of a red ring around it. It’s a small thing, but one which highlights that Christopher Ward are really trying to push the boat out with these MOD pieces.

The Sandhurst has a modest 150m water resistance. This will be plenty for most people, and is more than enough for a “field” watch, but as the crown doesn’t screw down, I’d double check it’s pushed in before swimming with the watch. 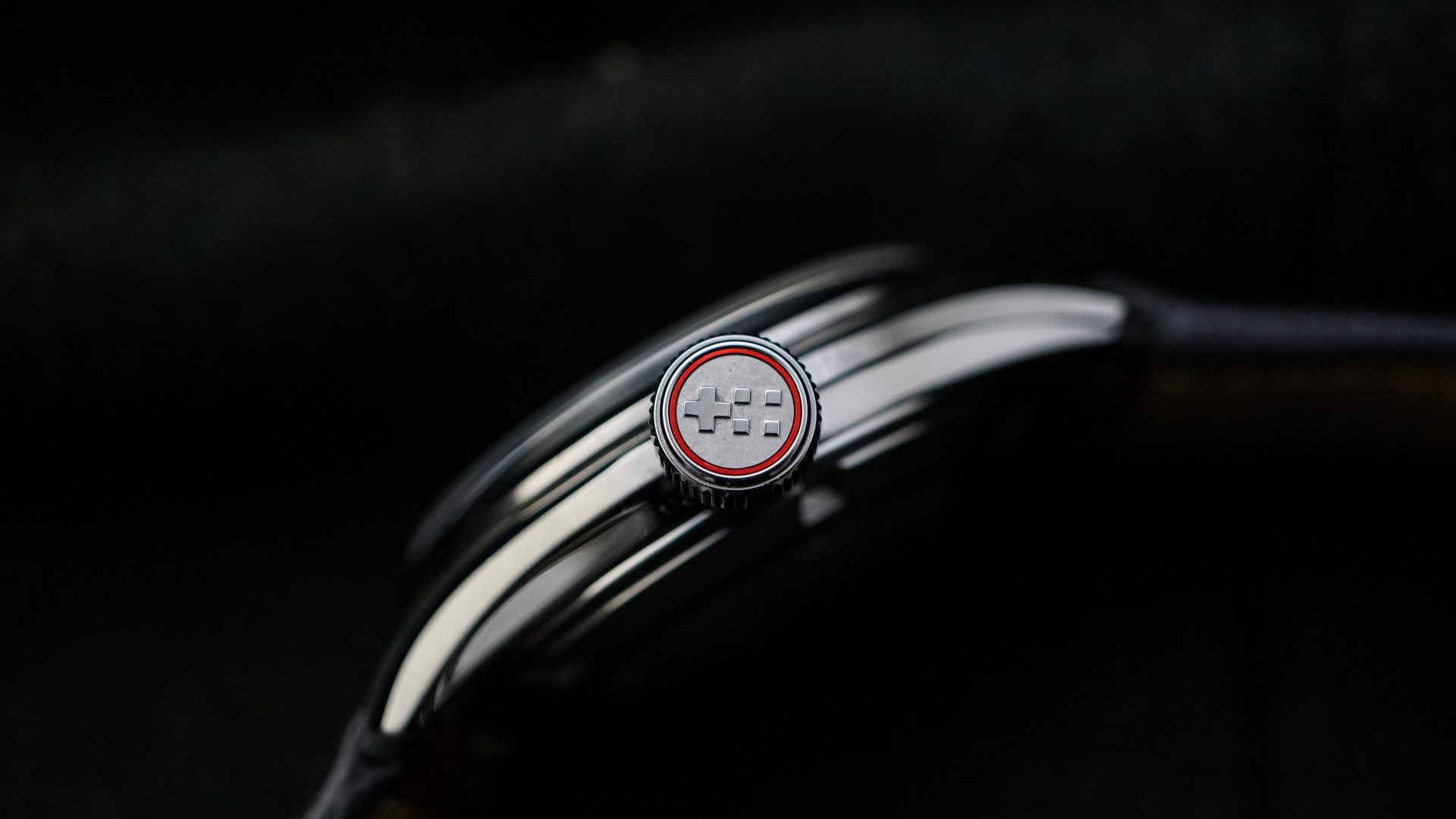 If we look quickly at the crystal you’ll see it’s a “glass box” sapphire one, as found on the rest of the C65 line. As I’ve said in a hell of a lot of reviews now, I’m a big fan of the vintage vibes these domed crystals give off. Sapphire crystals are obviously incredibly scratch-resistant, and this one is also pretty anti-reflective. Whilst Christopher Ward don’t mention it I’m sure they’ve put an anti-reflective coating on the underside. Even if they haven’t, I’m very happy with the legibility, because the Sandhurst is a lot better than my Hamilton Khaki ever was. 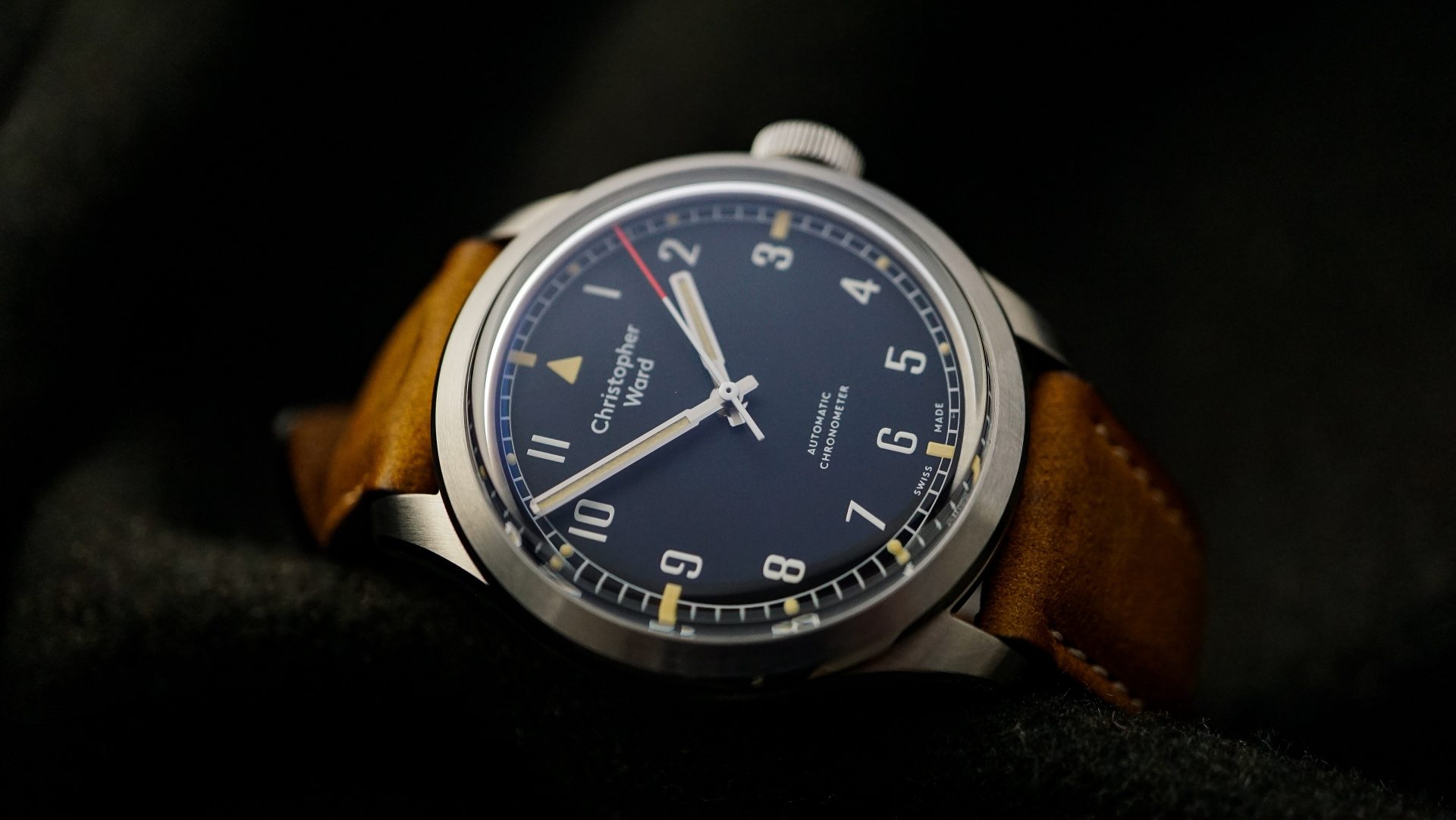 Of course the dial is that classic field watch layout you’d expect to see. It’s a pretty close copy of the Smith’s W10, with an arrow at 12, and the rest of the markers being crisp white Arabic numerals. The 6 & 9 are “open” too, which is a really neat detail

These are surrounded by a full minute track with “old radium” lume plots at each hour, which really pop against an otherwise monochrome dial.

And, as I’m sure you’ve all noticed, the Christopher Ward logo is at 12 rather than 9 o’clock! The controversy surrounding the logo is one I’ve covered before on the blog, but to cut to the chase, I’m sure many people will be happy to see it in a more customary position.

The overall quality of the dial print is exceptional. If you compare it to a similar piece like the Hamilton Khaki Field Mechanical, you can see straight away that the Sandhurst’s is crisper. And, it’s nice to see where the extra cash you have to pay for the latter goes.

The hands are the simple batons that Christopher Ward use on the rest of the C65 line. They’re no fuss and I like the contrasting finish between the flat brushed top and polished bevelled edges. The seconds hand is white with a bold red tip that’s pretty vivid against the black and white of the dial.

Unfortunately I think the finishing on the edge of the hands could be better. It’s not terrible, but it is noticeably rough, and it’s such a disappointment to see the Sandhurst fall down here when the rest of the finishing is so damn good. 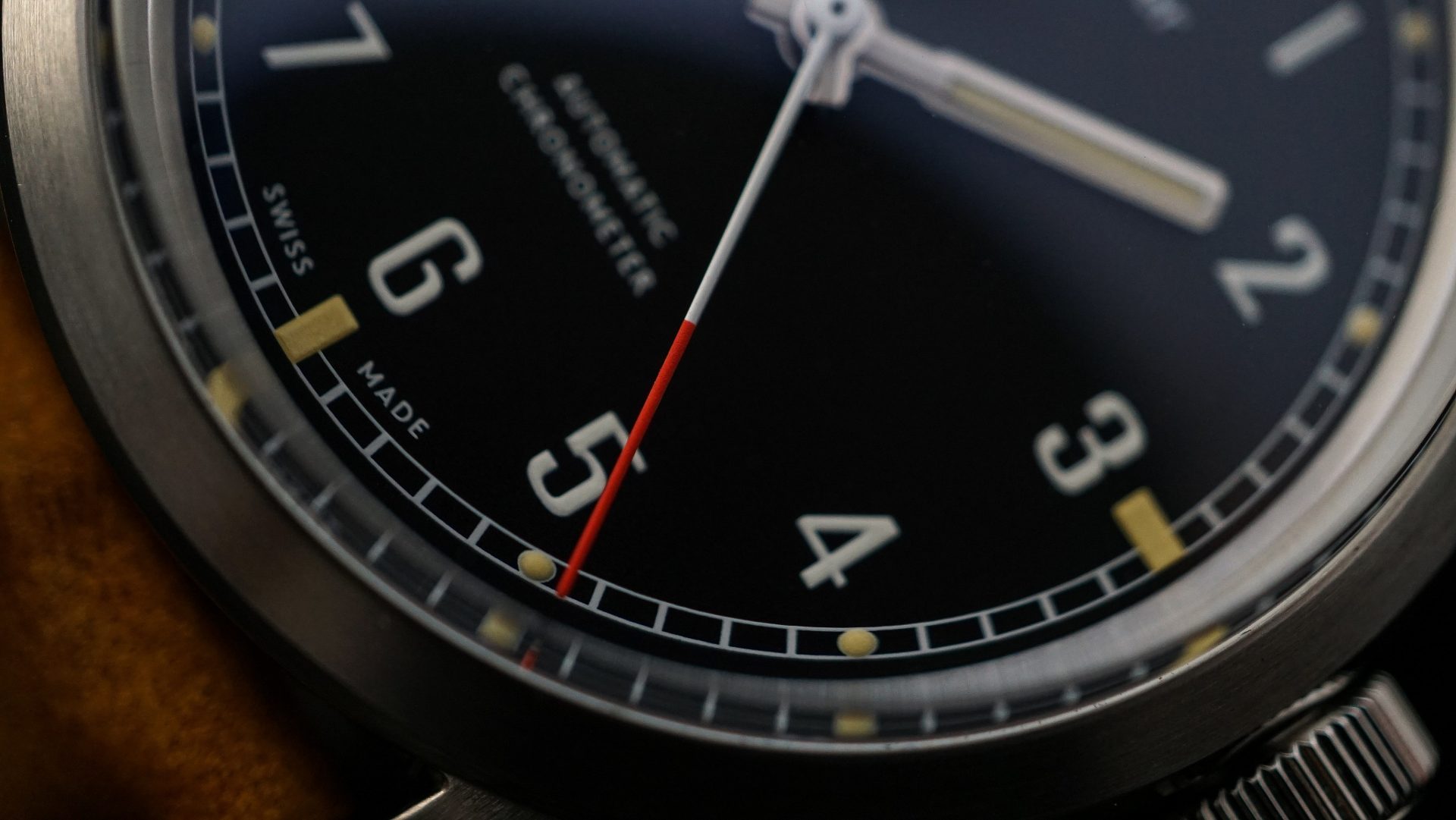 Despite Christopher Ward making huge leaps with the lume on the MK3 C60 Trident, I found the lume of the Sandhurst to be disappointing. They’ve used a blend of T-C1 and Old Radium Super-LumiNova, and whilst it looks very pretty when you charge it with a torch, I find it poor during every day wear. Part of the problem is that Old Radium Super-LumiNova isn’t the brightest anyway, and the other part is that there simply isn’t enough of the C1. I can’t help but feel that the Sandhurst puts form before function here, and to be honest it’s a bit of a let-down. 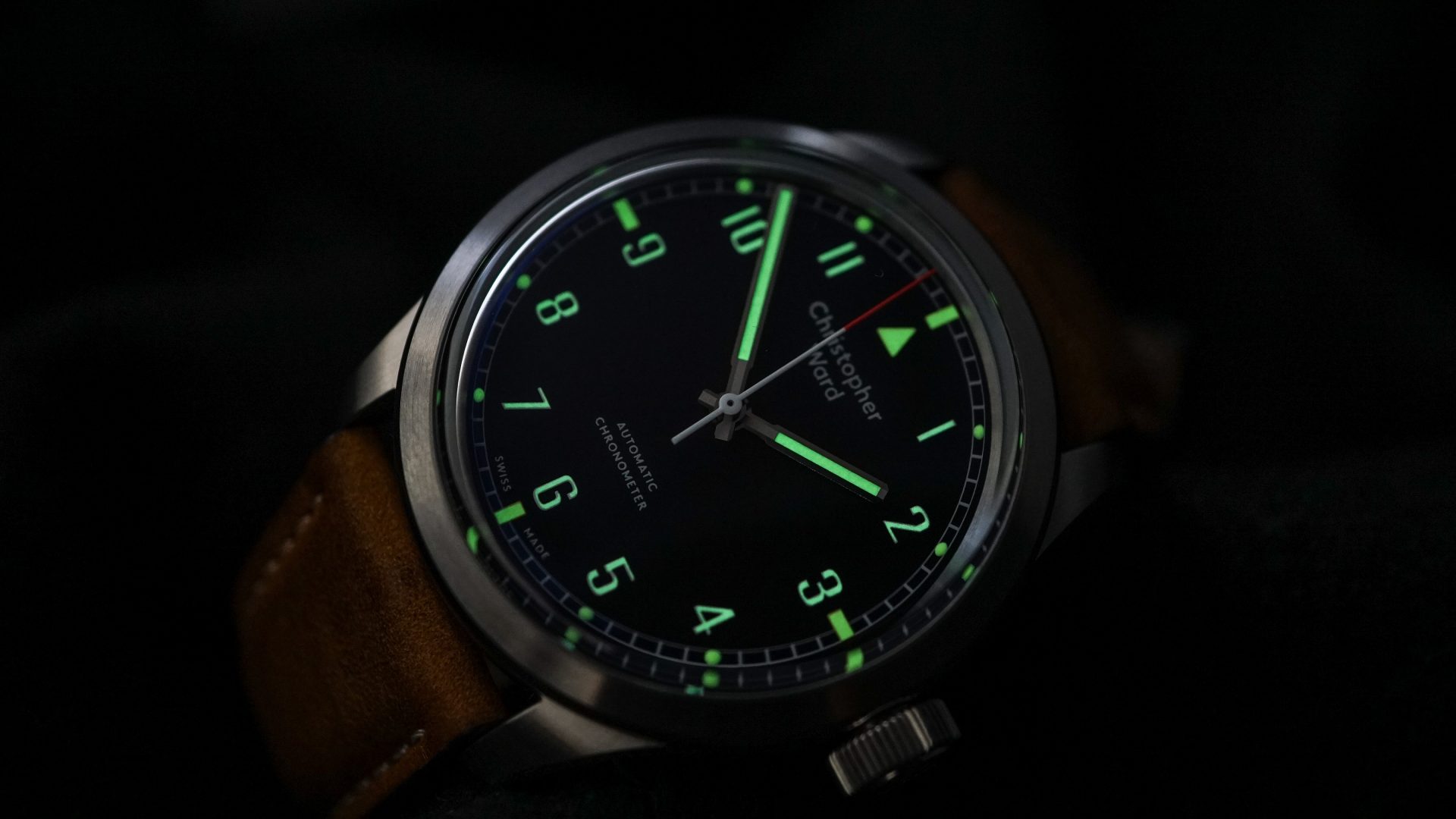 Not gonna lie, the lume is a bit disappointing.

Now, one of my favourite parts of the new Sandhurst is the movement. Why you ask? Well, because Christopher Ward have actually bothered to use a COSC certified Sellita SW200-1. And, for me at least, this is a key improvement. Given that Christopher Ward are slowly moving upmarket, making more watches that are certified chronometers is what’s needed to help them justify higher prices, whilst still being competitive value propositions.

As to the specs of the SW200, if you didn’t already know it’s basically the same movement as an ETA 2824, with 38 hours power reserve, 26 jewels, and a beat rate of 28,800 vph. Furthermore, as a chronometer certified movement, it should also come with Incabloc shock protection. The SW200 is one of the go to choices for entry level Swiss watches, and a movement I think we’ll be seeing a whole lot more of, given the ongoing saga between ETA owners Swatch and COMCO, the Swiss Competition Commission. 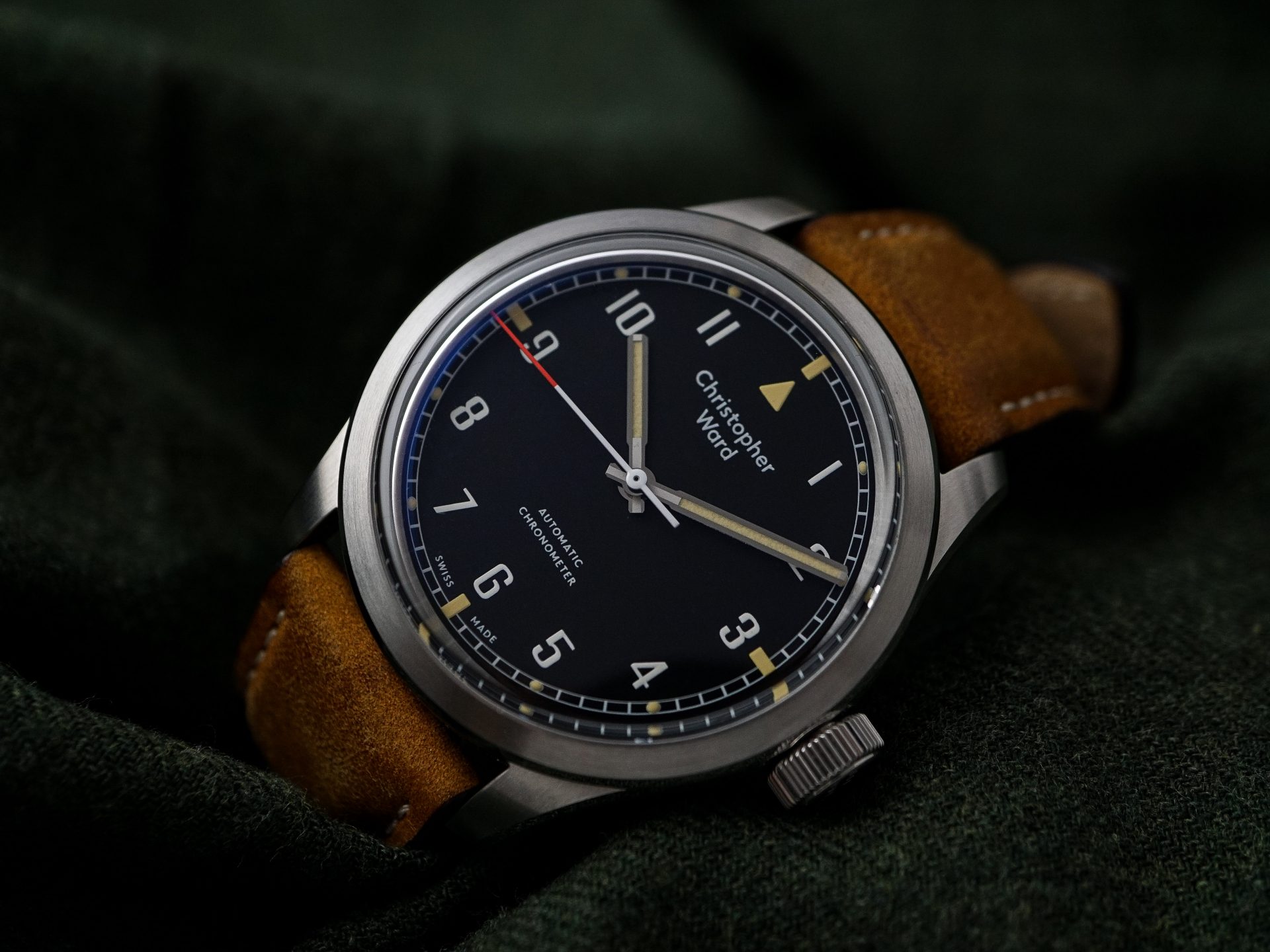 The Sandhurst is available on either a bracelet, a leather strap, or a webbing one. I went with the leather, and I think its colour complements the dial nicely. The leather is nice and supple, and it feels as decent as you’d expect on an £800 watch. The strap also has quick release spring bars, so you can swap it out for something else very easily. The bracelet is also quick release so, if you can’t make up your mind, then you can swap between both in about 10 seconds! 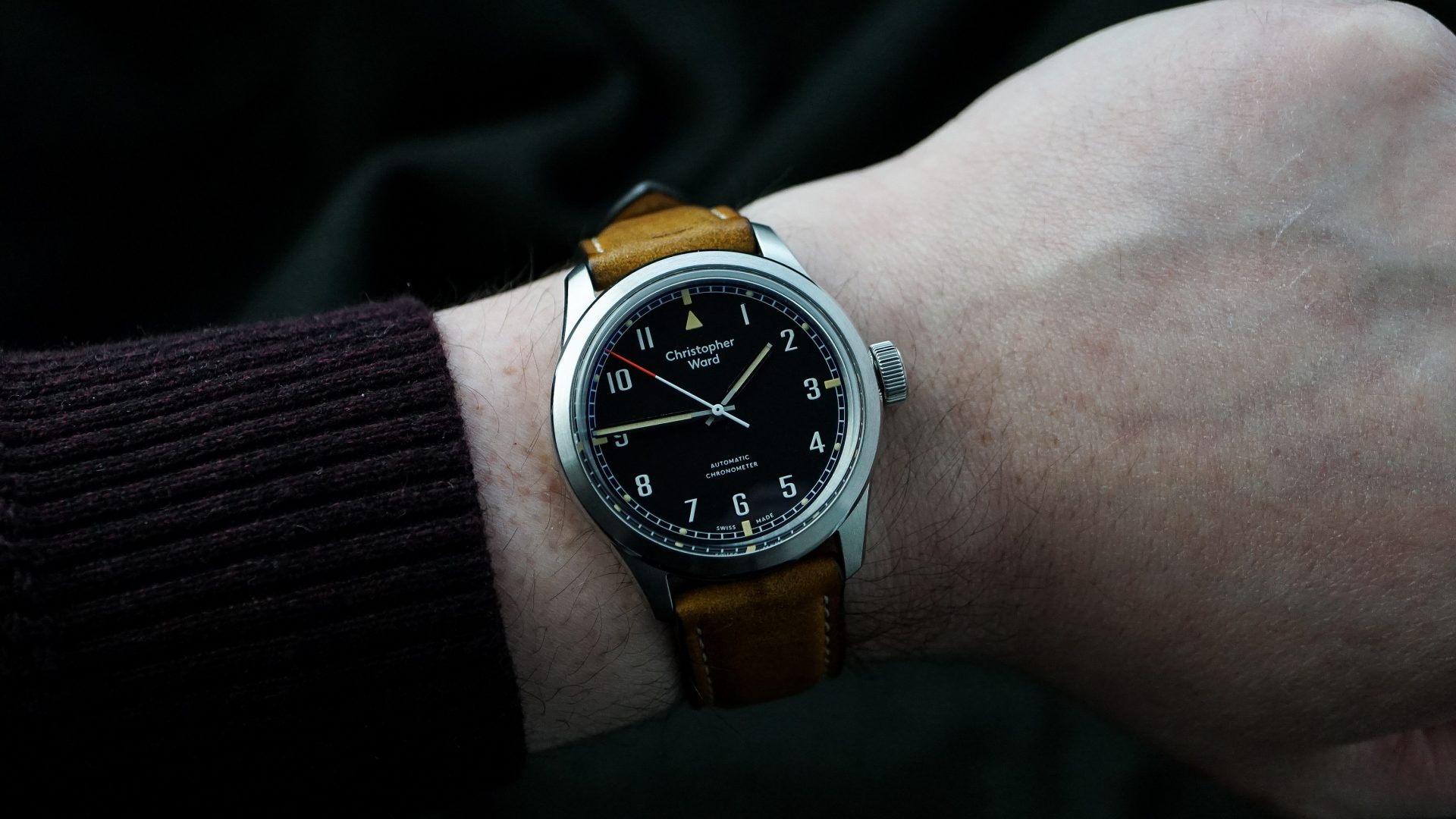 There’s a reason that I keep getting drawn to Christopher Ward, and it’s that they offer such a tempting value proposition. It’s not just the specs on paper either, but the execution that’s so compelling. For the most part the finish is incredible, and I think it can easily compete with watches in the £1,000-2000 range. Of course I say “for the most part”, because for all their efforts Christopher Ward have still slipped up in a couple of places. The poor finishing on the hands is a small thing, but it sticks out like a sore thumb on a watch that’s otherwise so well made. The lume is also too weak for a tool watch like this. Perhaps I’m being too harsh on the Sandhurst, but that’s only because I think it’s so close to faultlessness.

At £795 on a strap, or £895 on a bracelet, the Sandhurst is by no means cheap. However, I think Christopher Ward have done a fine job of taking one of the most simple and well-trodden designs, and giving it a fresh look. It’s got just the right amount of detailing, and it’s an incredibly versatile piece that you really can dress up or down. Overall I’m a big fan of this particular release, and think it’s a great choice for those looking for a field watch.

If you like the look of the Sandhurst, you can buy one from Christopher Ward’s website here.