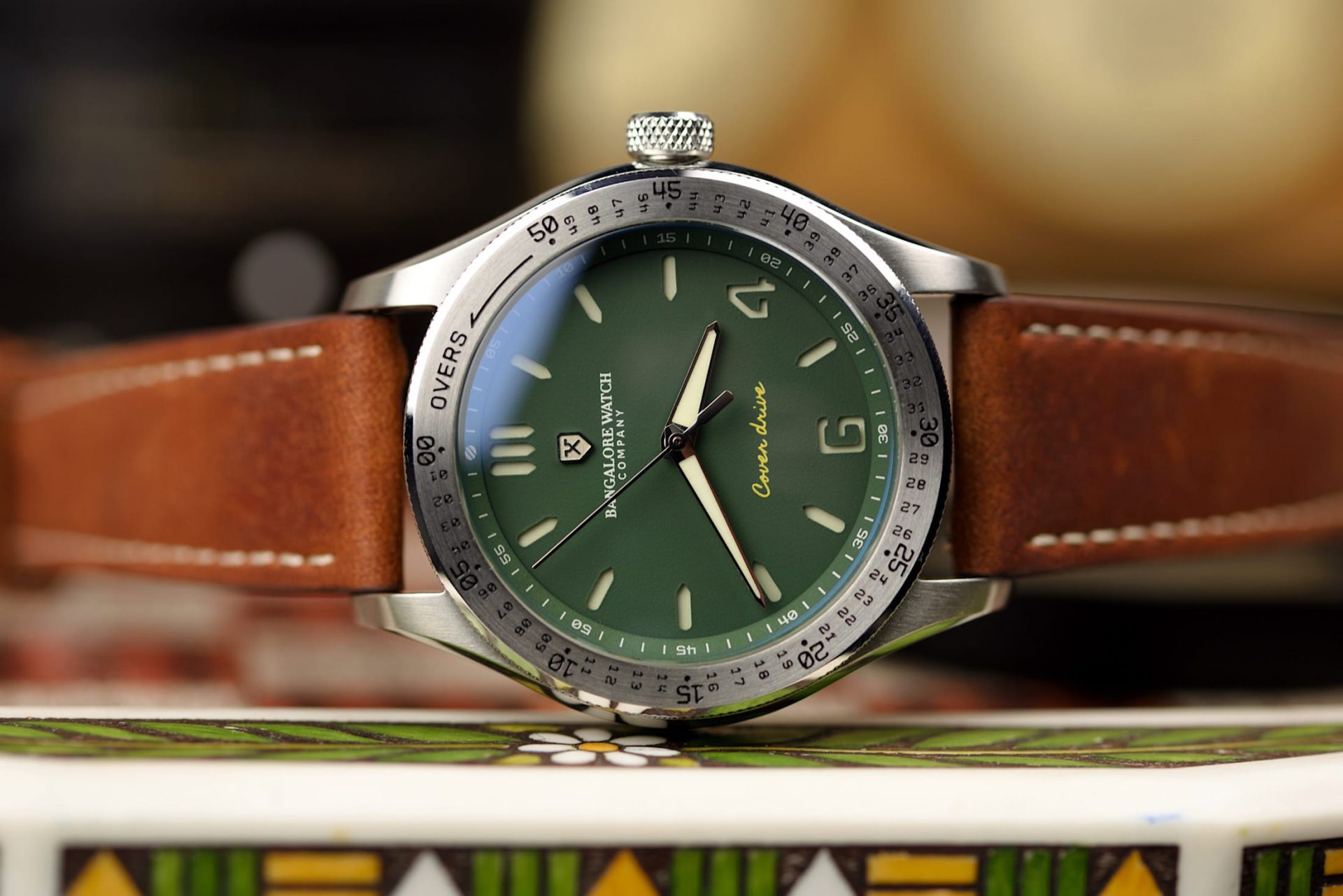 A bezel that counts overs. LBW!

Today I’m looking at the Cover Drive from Bangalore Watch Company. I’ve seen a few of their previous releases, including the interesting rendition of a pilot watch (the MACH 1) but it wasn’t until the Cover Drive that I’ve felt a great connection or desire to try one out. The Cover Drive is a cricket inspired watch, with one of the main thematic elements being the bezel which tracks overs rather than dive time (or boiled eggs). My first reaction was that basing a watch around such a function would be unnecessary and gimmicky. Was I wrong?

I’d like to start by getting all of the cricket nods out of the way – and there are quite a few. Let’s begin with the stainless steel bezel. The markings on the bezel count down the remaining overs in a short form cricket match, such as T20 or up to 50 overs for One Day Internationals. If you’ve ever spent a lazy Saturday watching your local cricket side you’ll find it surprisingly easily to lose track of the overs among other things, so I can see the bezel actually being useful if you like to pay close attention to the match. The full markings, which are larger at each five minute interval, are entirely usable for whatever else you might want though.

I like stainless steel bezels, and especially ones with very fine circular brushing as seen here. Although a 60 click bezel (i.e. one click per over) might make more sense, Bangalore Watch Company have opted for a 120 click bezel due to the better feel. There is also a second, more subtle cricket reference with the knurling around the edge replicating the pattern of a bat’s grip. I could have missed this small detail if I hadn’t seen it mentioned elsewhere, but I feel it’s a good thing not to be smacked in the face with all of the details at once. That same pattern is also seen on the push/pull crown.

This is the second sandwich dial watch I’ve reviewed recently, and although I’m still not a great fan I have to say that it is again done well with crisp cut outs leaving large lumed areas. The three stumps at the 12 o’clock position represent the wicket, with only the indices at four and six being represented as numbers (four and six being the boundary scores in cricket). Again, this detail is just about subtle enough to be charming rather than clumsy.

The dial of this particular version of the Cover Drive, named ‘Outfield’, is a deep matte green with a matching chapter ring to mark out the minutes. The hour and minute hands are filled with C3 SuperLuminova, as is the sandwich dial. The hands are fairly conservative in style with the exception of the counterweight of the second hand which takes the form of a cricket bat.

On the reverse of the case is a lovely embossed image of a cricketer performing a cover drive. I’m happy to go on record and say I prefer an interesting engraving on a case back rather than a view of a rotor of a stock movement. The finishing of the case is up to the same standard as the bezel, with excellent brushing from top lug to bottom and a polished chamfer running along each edge.

At 40mm in diameter and 48mm from lug to lug this hits my sweet spot. Height is listed at 12.5mm to the top of the domed sapphire, but on my wrist I would say it doesn’t feel as tall as that. In fact, the whole package feels slightly more compact than the specs suggest. The leather strap provided is of good quality, but I’d probably look to pair this watch with something less formal. Bangalore Watch Company market this as a ‘go anywhere, do anything’ watch and that’s fair. It’s not a dive watch despite the rotating bezel and not really a tool watch either, but it’s smart enough on leather to be worn with a formal shirt. With a 20mm lug width there should be plenty of other options out there to dress the watch down a bit if required.

So, with the over-counting bezel, cricket bat grip knurling, wicket and boundary dial markings, cricket bat seconds hand, outfield dial colour and the case back imagery, the Cover Drive does go quite far with the theme. Somehow it doesn’t feel too far though. Aside from the bezel markings, most of the details would draw inquisitive looks rather than seeing just a ‘cricket inspired’ watch. With the Swiss automatic Sellita SW200 and excellent dial and case finishing, Bangalore Watch Company are certainly backing the design up with quality.

Oh, and I’ve just spotted the cricket ball at the top of the chapter ring too.

The Cover Drive is priced at around £550 and available from https://www.bangalorewatchco.in/ 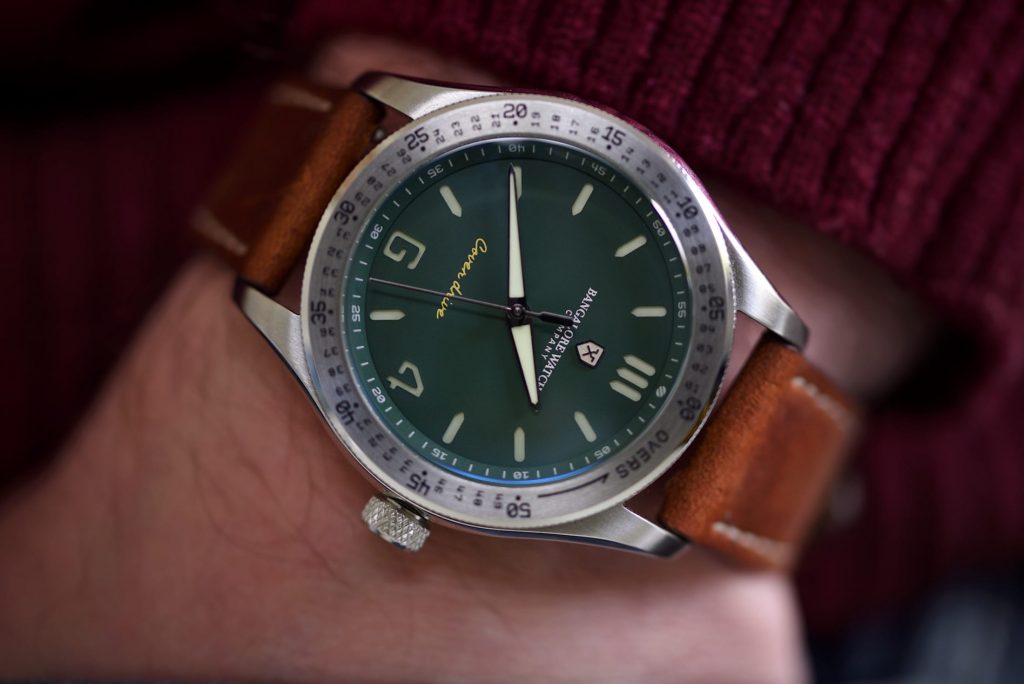 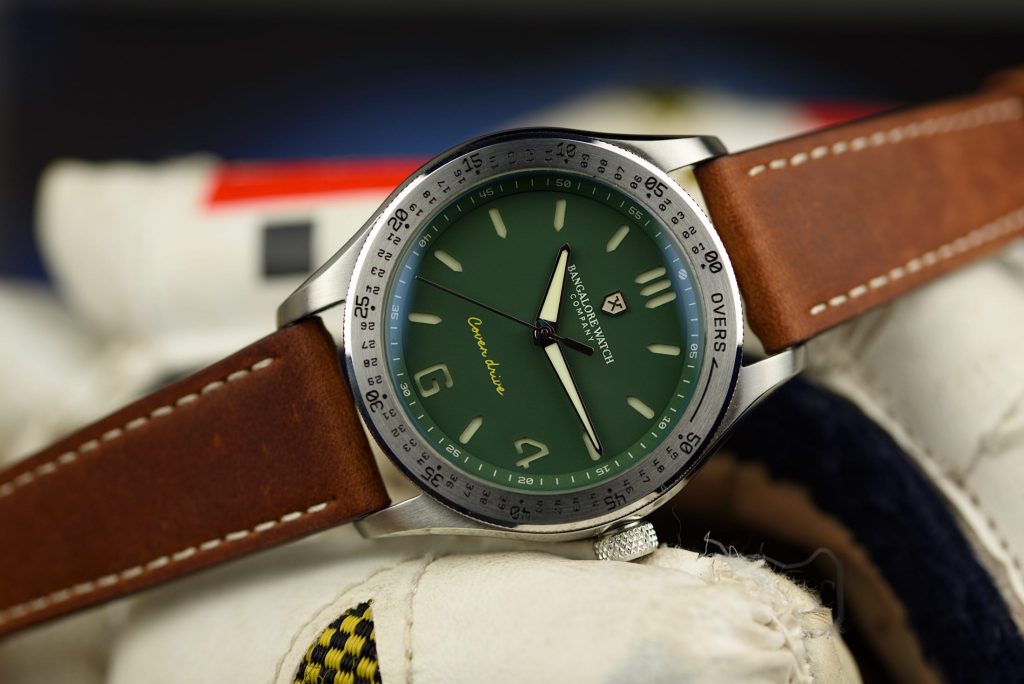 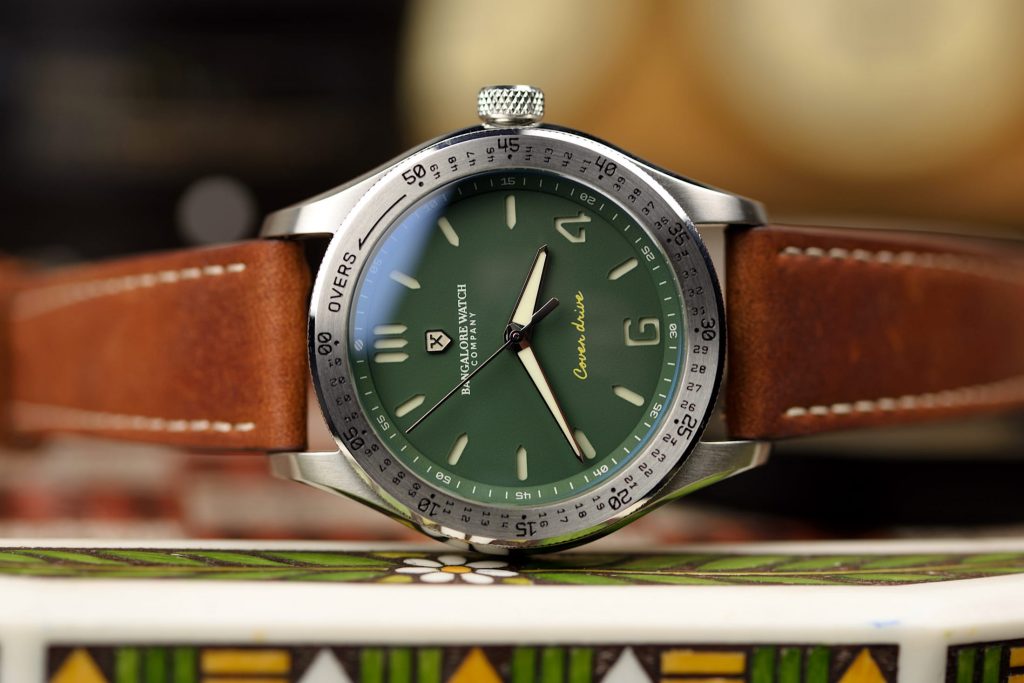 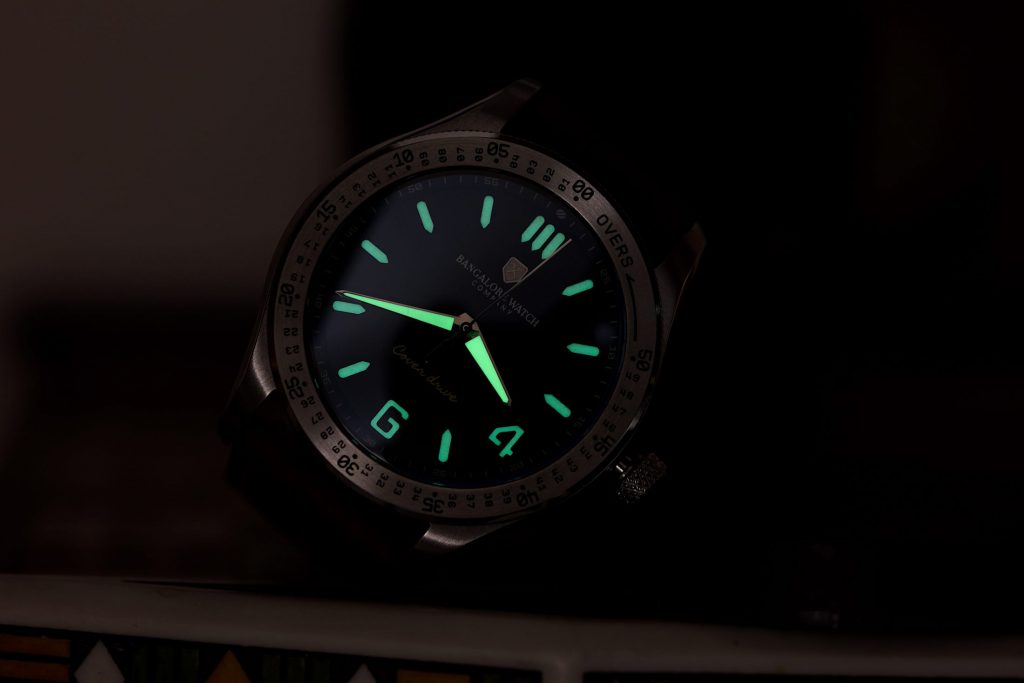 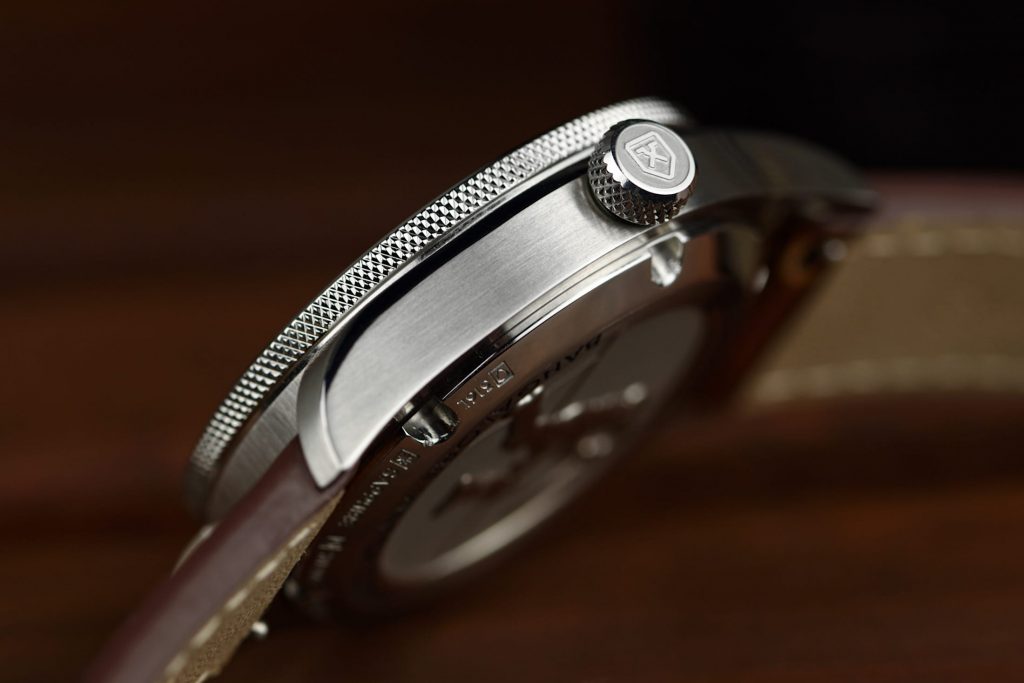 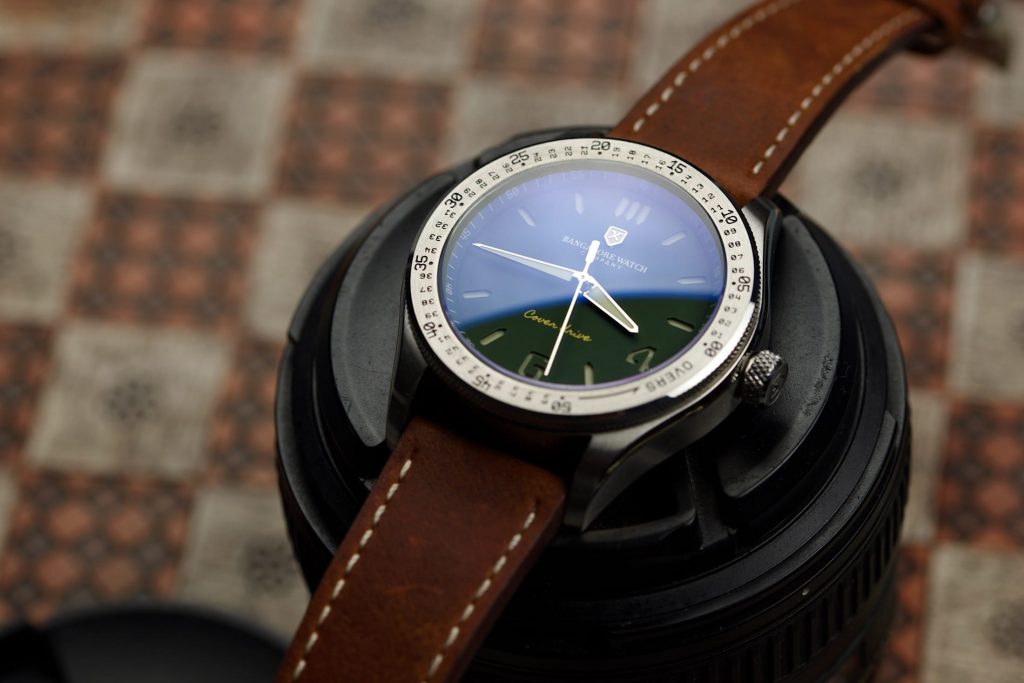 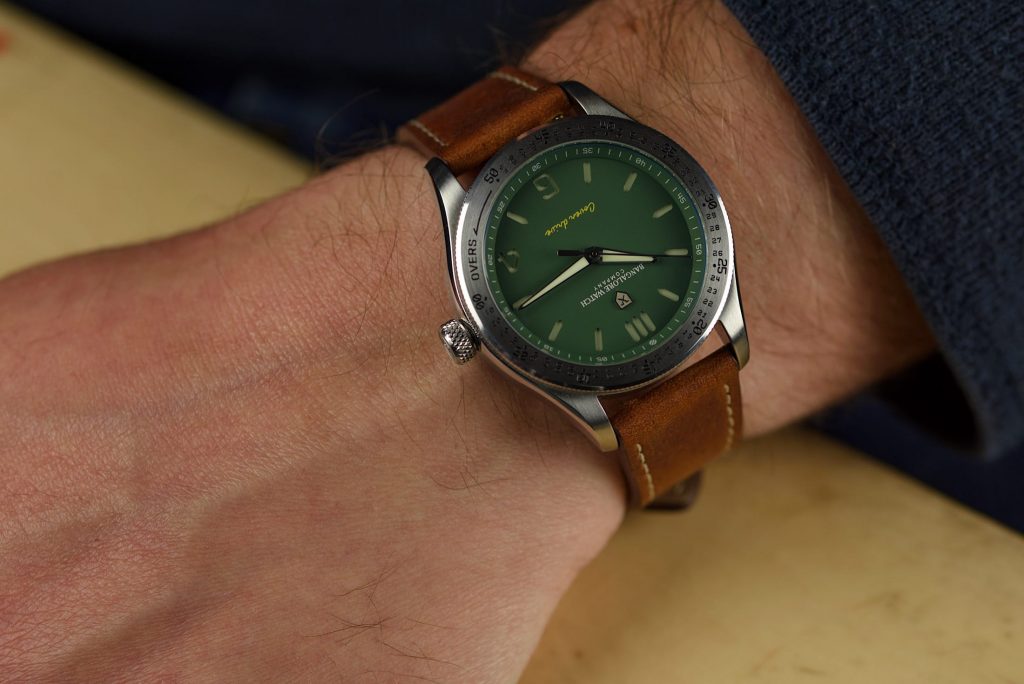 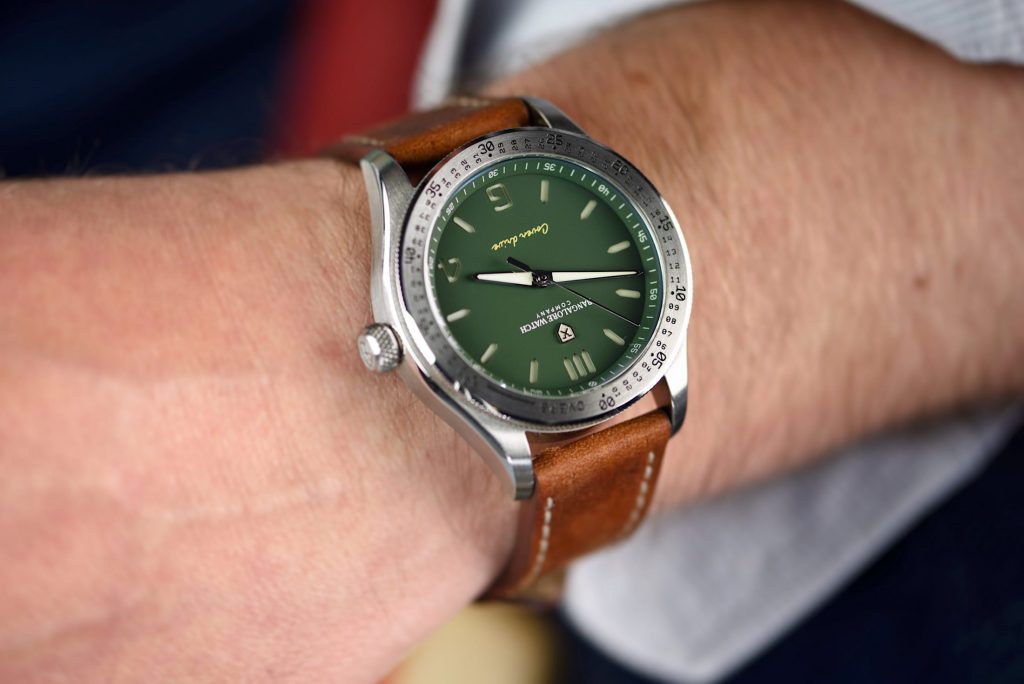 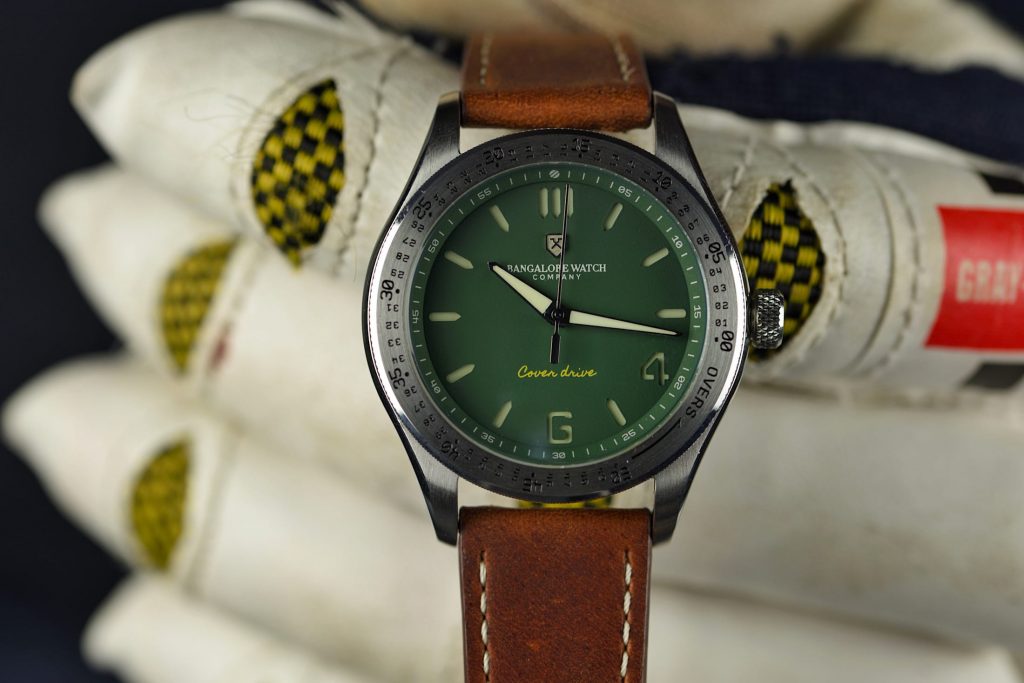 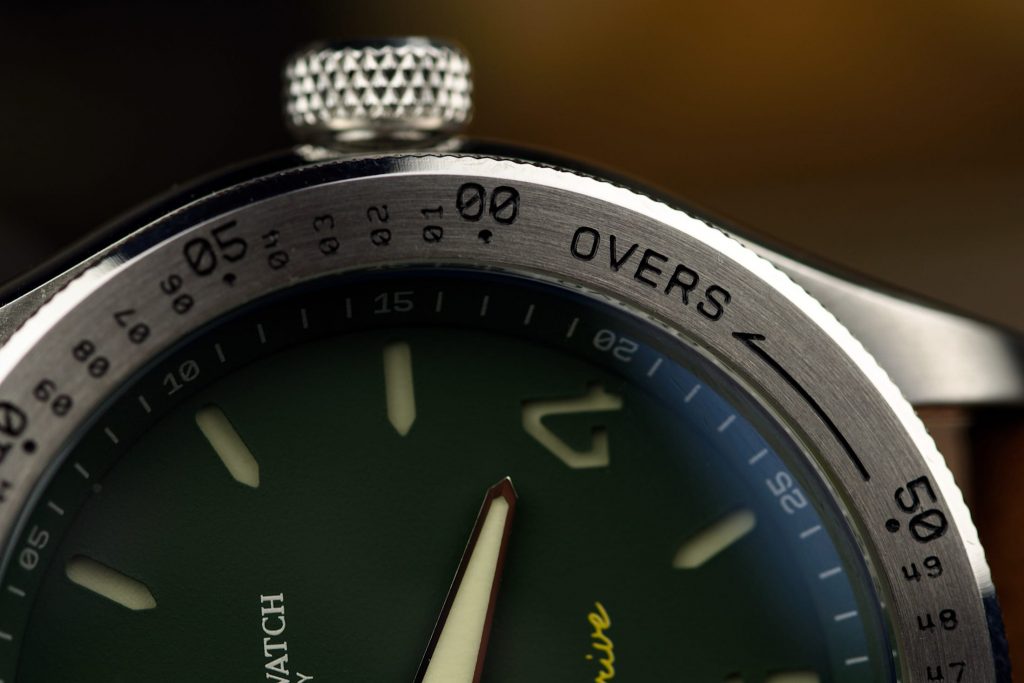