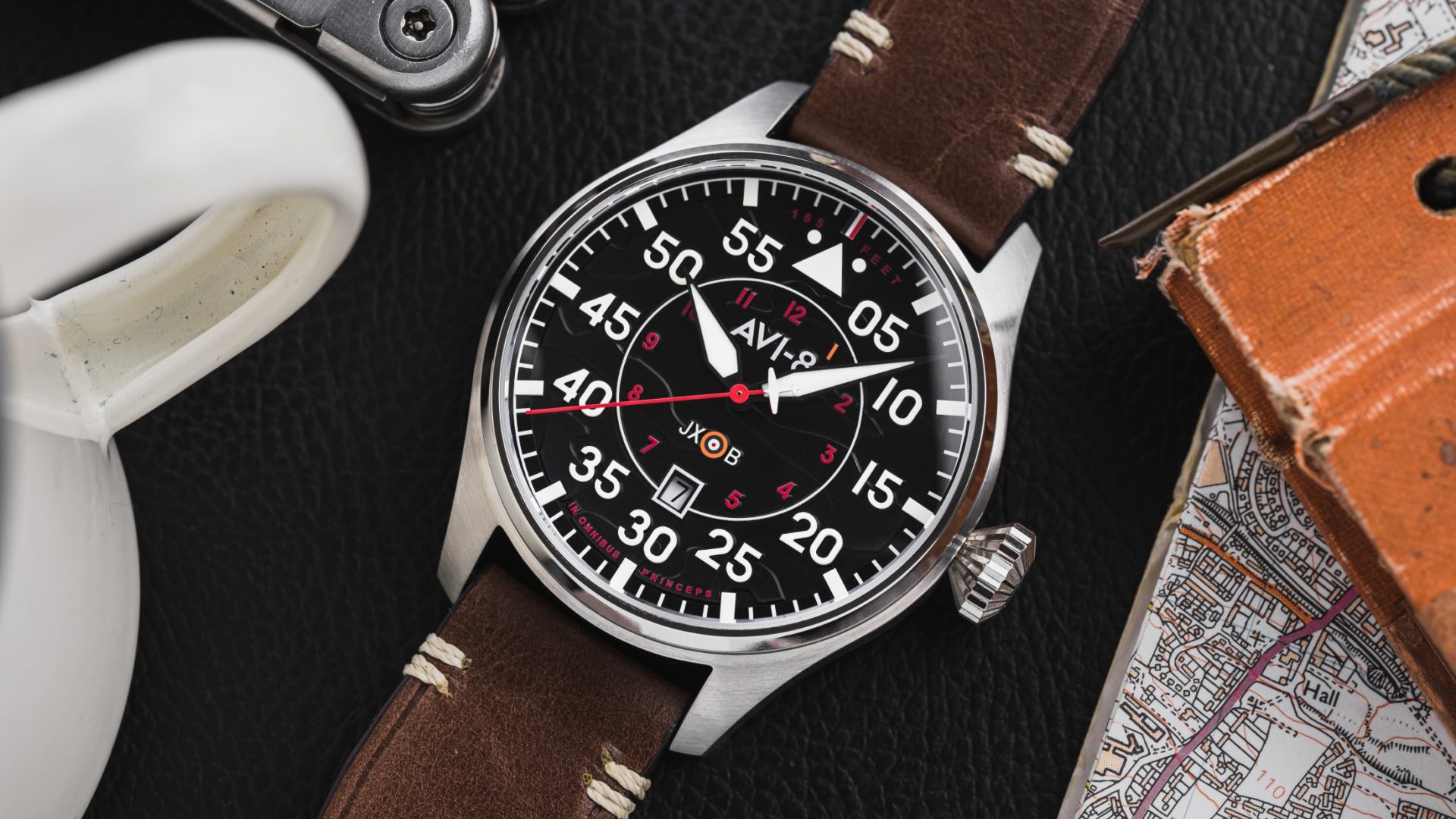 As I said in my recent review of the Laco Flieger Pro, the problem I have with pilot’s watches is that they all look alike. Well, Avi-8’s latest watch is looking to change that. It’s called the Hawker Hurricane Clowes Automatic, and as the name suggests it honours fighter ace Arthur Clowes. Clowes served in the RAF’s No.1 Squadron for the first three years of the war, where he flew a Hawker Hurricane. He would go on to score at least 12 kills and was awarded both the Distinguished Flying Medal and the Distinguished Flying Cross.

Therefore, naming this watch after him seems a fitting choice, given that it looks to pay tribute to the Hawker Hurricane and its pilots. There are three versions of the Clowes available in steel, with a retail price of £295, and a plated bronze-coloured version priced at £330.

The Clowes Automatic Is Not For The Small-Wristed

Now, the first thing that struck me about the Clowes is its size. The steel case is a whopping 46mm in diameter, which makes it the largest watch I think I’ve ever reviewed. It’s got a lug to lug of 55mm, and a thickness of 13.5mm. As soon as I strap the watch onto my 6.25-inch wrist it’s obvious that it’s too big for me. However, the Clowes Automatic will be perfect for anyone with larger wrists after a watch with real presence. Sizing aside, the case is nicely finished, with sharp edges and even brushing. The crown is also pretty big and therefore really easy to grip.

A Dial Packed With Details

After the overall size of the Clowes, the next thing to hit you is the dial, which is protected by a sapphire crystal with an anti-reflective coating. The watch has a Type-B layout, but Avi-8 have taken that standard Flieger design and completely overhauled it so that the Clowes Automatic is a far cry from a basic pilot’s watch.

Firstly, the oversized minute markers are applied 3-dimensional blocks that really pop out at you and give the dial some impressive depth. The dial itself has a bit of depth too, as it’s embossed with a camouflage pattern that evokes that used on the Hawker Hurricane. Besides the camouflage pattern on the dial, the Clowes Automatic has a ton of other nods to the Hurricane and the RAF. For starters, the counterweight on the seconds hand is the silhouette of a Hurricane. Then, above the date window, there’s the aircraft identification code for Clowes’s Hurricane – JXB, with the RAF Roundel. Above the minute track at six you’ll find the inscription: “In Omnibus Princeps”, which is Latin for “First In All Things”, the motto of the RAF’s No.1 Squadron. Another nod to the squadron can be found on the 12-hour scale, where the one is highlighted orange in contrast to the other red numbers. Lastly, the minute marker at twelve is red, white, and blue to mimic the fin flash painted on the tail of RAF planes.

Looking at the Clowes and taking all these elements in, I think they might all be a bit much. Less is often more, but that’s just my personal opinion, and I’m sure there are many people who’ll appreciate and enjoy these touches. Plus, whilst the dial isn’t really my cup of tea, in Avi-8’s defence the Clowes is still very easy to read. The lume is also surprisingly good, and I was pretty impressed with the steady even glow that emanated from the hands and numerals.

As a pilot’s watch, the Clowes doesn’t have a particularly high depth rating, and it’s only water resistant to a mere 50m. This is referenced across the top of the dial where the equivalent imperial measurement of 165ft is printed.

The Clowes Automatic comes on a 22mm leather strap that tapers dramatically down to 18mm. It’s nice and thick so it pairs well with the watch, and though it’s not of the highest quality, it’s pretty much what I’d expect for an affordable watch like this.

Inside the Clowes beats a Seiko NH-series automatic movement. It has 21 jewels, a 3Hz beat rate, and a 41-hour power reserve. Seiko’s NH-series of calibres are well-known for their reliability, and in that regard, this is a solid choice of movement. However, the movement doesn’t have a hacking feature, so the seconds hand keeps ticking even with the crown pulled out. In this day and age, it’s a minor feature that most movements have, and I feel that one of the newer Miyota 8-series calibres would be a better choice, as they have similar specs and hacking.

As you might’ve guessed from my comments about the Clowes’s size and dial, this isn’t a watch for me. However, those are purely subjective reasons, and there are a number of features that I really like about the watch.  I am rather fond of the 3-D markers. They aren’t something I’ve seen before at this price point, and I think they go a long way to helping the Clowes feel fresh. The same goes for the camouflage pattern on the dial. Together with the markers, it makes the dial feel very contemporary and gives it some real depth, something that’s often missing from pilot’s watches.

My own tastes aside, the Clowes is undoubtedly a well-made watch and a strong value proposition. Avi-8 has done a good job of putting an original spin on a classic pilot’s watch, whilst maintaining the design’s legibility. The finishing of the watch is excellent, and I think that if you appreciate all the little references to the RAF and the Hurricane then this is a great watch to get. Again, whilst those references aren’t for me, at £295 the Clowes is a  well-rounded watch for the money, and it’s a solid pick for an entry-level pilot’s watch.

You can purchase the Clowes Automatic from Avi-8’s website here.