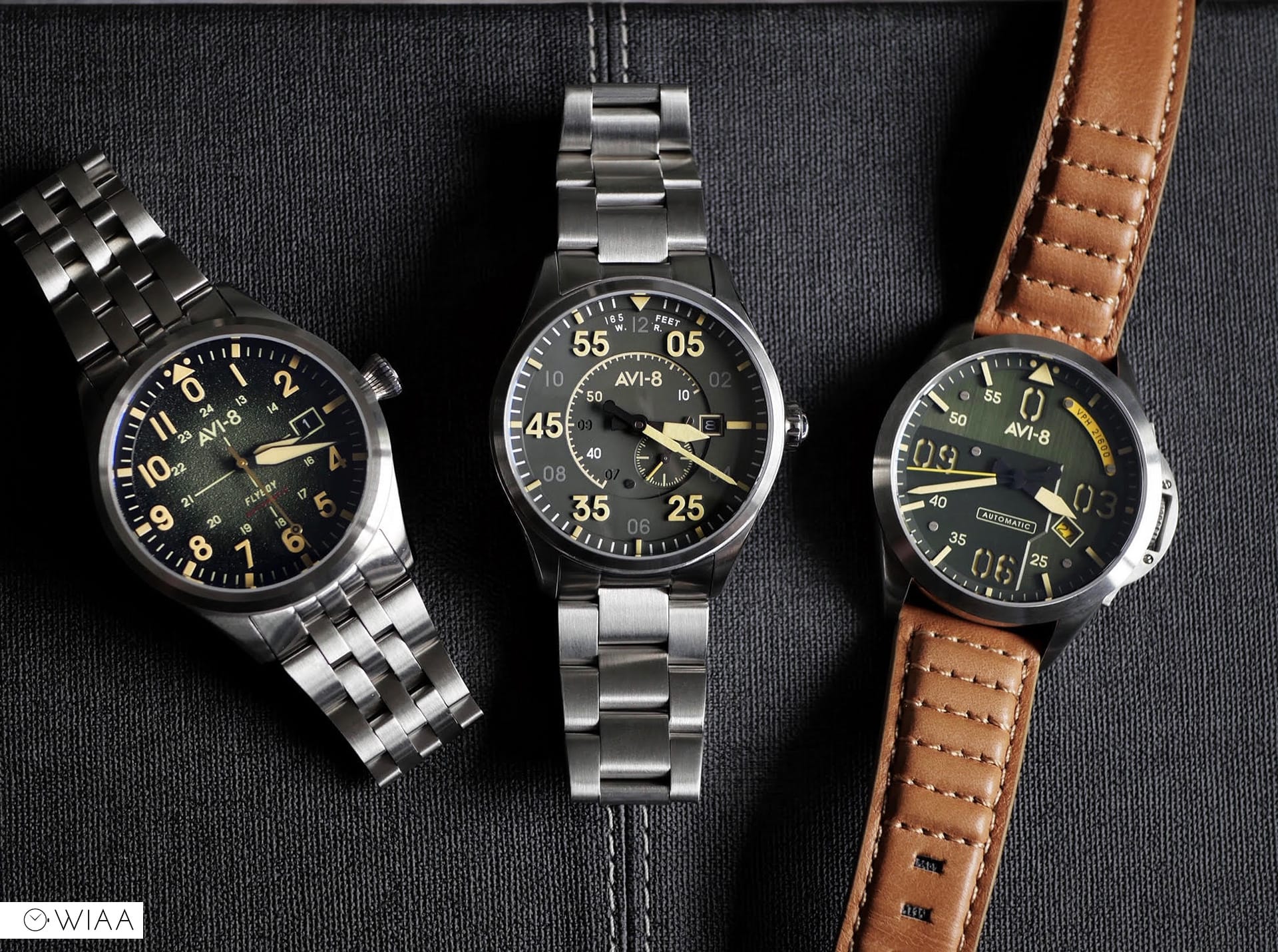 I’ve been spending some time this past week with three watches from AVI-8. All slightly different but all very unmistakably AVI-8 in design. If you haven’t heard of AVI-8, they manufacture a bewildering line of aviation-themed and inspired watches that always feature interesting and exciting dial designs with a very affordable price tag.

The three watches I want to talk about today don’t stray very far from what has made AVI-8 a trendy brand at this price point. This isn’t a detailed review, but more of a teaser for the three of them and for one that I think stands out a little more and I’m sure will be very popular for the brand.

Firstly, what’s similar? Well, all three are three-hander automatics featuring a Japanese movement (NH35). All are made from stainless steel, all feature a date function, all of them have sapphire crystals with anti-reflective coating, and all have a very favourable lug width of 22mm. They all feature lumed hands and indices, so when things get dark, they will remain legible.

From here, the watches take similar but differing paths. Both the Flyboy Engineer and the Type 300 Automatic come in at 42mm in diameter and come on stainless steel bracelets. The Flyboys bracelet is almost a jubilee style while the Type 300 is in a more oyster style. Both have milled security clasps and overall are very solid in their feel. The Patriot, in this instance, is the odd one out in the bracelet category and comes on a very nice leather strap. The leather is very soft and supple but feels like it will last and is very comfortable on the wrist. The Patriot is also the biggest of the three at 43mm, but because of the leather strap this is also the lightest overall on the wrist

Other differences become apparent when you look at the back of the watches. In this instance, the Flyboy is the odd one out and features a solid case back with a lovely engraving of a pilots face and the Flyboy wording underneath. Both the Patriot and Type 300 feature a display case back with decorated rotor. For the patriot, this takes the form of a black rotor with the AVI-8 brand name on it and an American centre star for that patriotic reference. The Type 300 has a rotor that’s been cut out to look like a fighter plane which is a simple but nice touch on this one.

Dial wise this is where things again get different. Although all three use what is the same movement. Their approach to dial layout is very different. All three feature what I would call a brackish green colour tone with yellow details. But all three also have very different styles when it comes to finishing. AVI-8 always comes up with very complicated and sometimes busy dials, but they are always exciting and fun to look at, and these three are no different. The Patriots Dial has two sections to it one sitting slightly higher than the other, and the finish is a very fine brushing that runs in different directions for both sections. These are attached with tiny silver screws, and it’s reminiscent of aircraft body panelling. The indices float around the outside chapter ring with simple baton markers but then the twelve, or in this case zero, three, six and nine markers are recessed in a sandwich dial style. The hands are broad and sharp and fully lumed, and the second hand is finished in a bright yellow. As with most dials from AVI-8, this one is detail-rich and has a 3d effect that makes it fun to look at. The brushing is well done, and overall it’s a very nice dial. 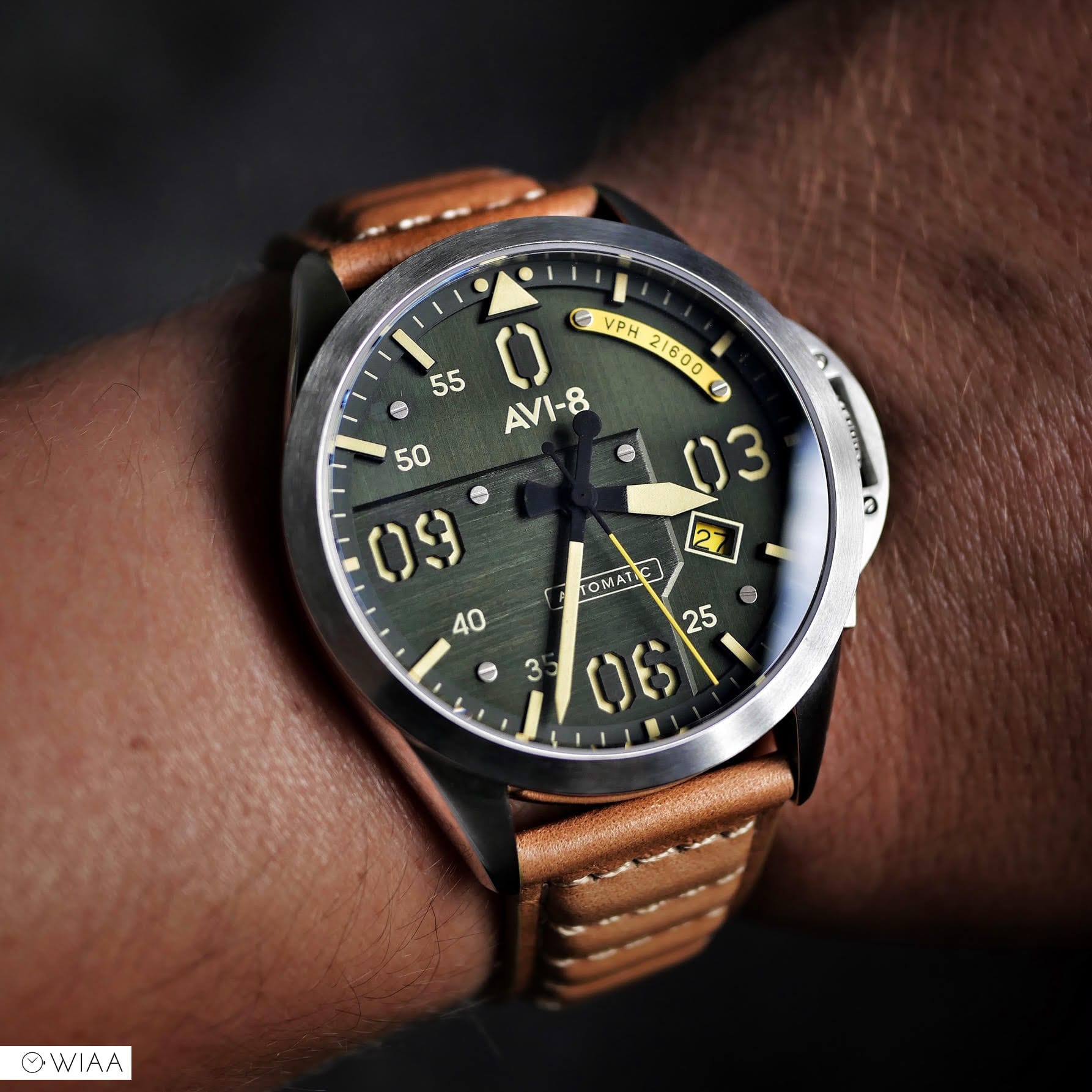 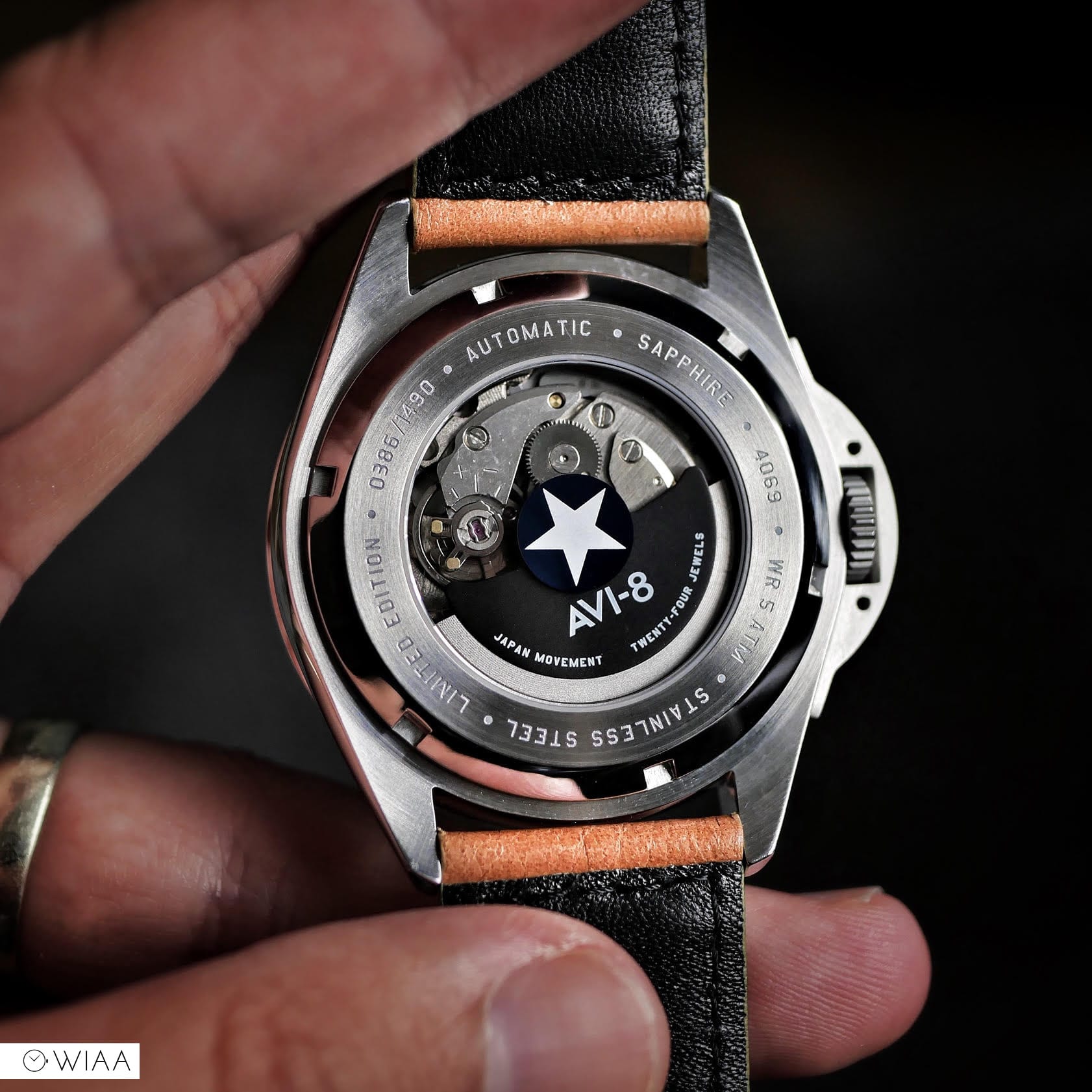 The Type 300 is a drab, flat green with yellow details for the indices but again AVI-8 have added depth to the dial with 3d markers and indices and a central section that is recessed for the date and a small seconds sub-dial. The Type 300 does away with traditional one to twelve indices and mixes them with other markers at the minute markers of five, twenty-five, thirty-five, forty-five, and fifty-five. Between these sit more traditional hour markers but these are in grey and can be hard to see. It’s not a problematic dial to read by any means but is probably the least traditional. Although due to the sizing it’s highly legible like all AVI-8 watches tend to be. 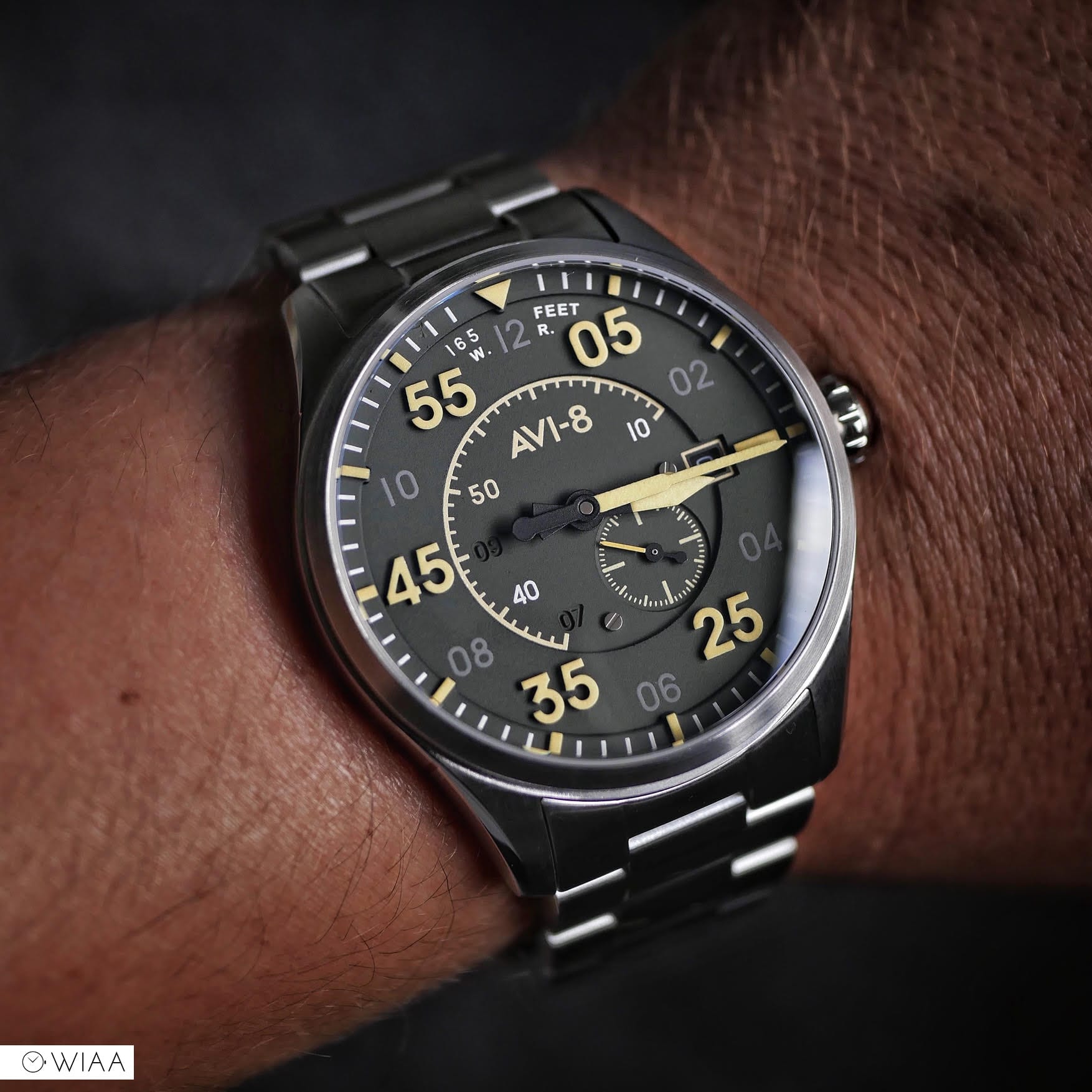 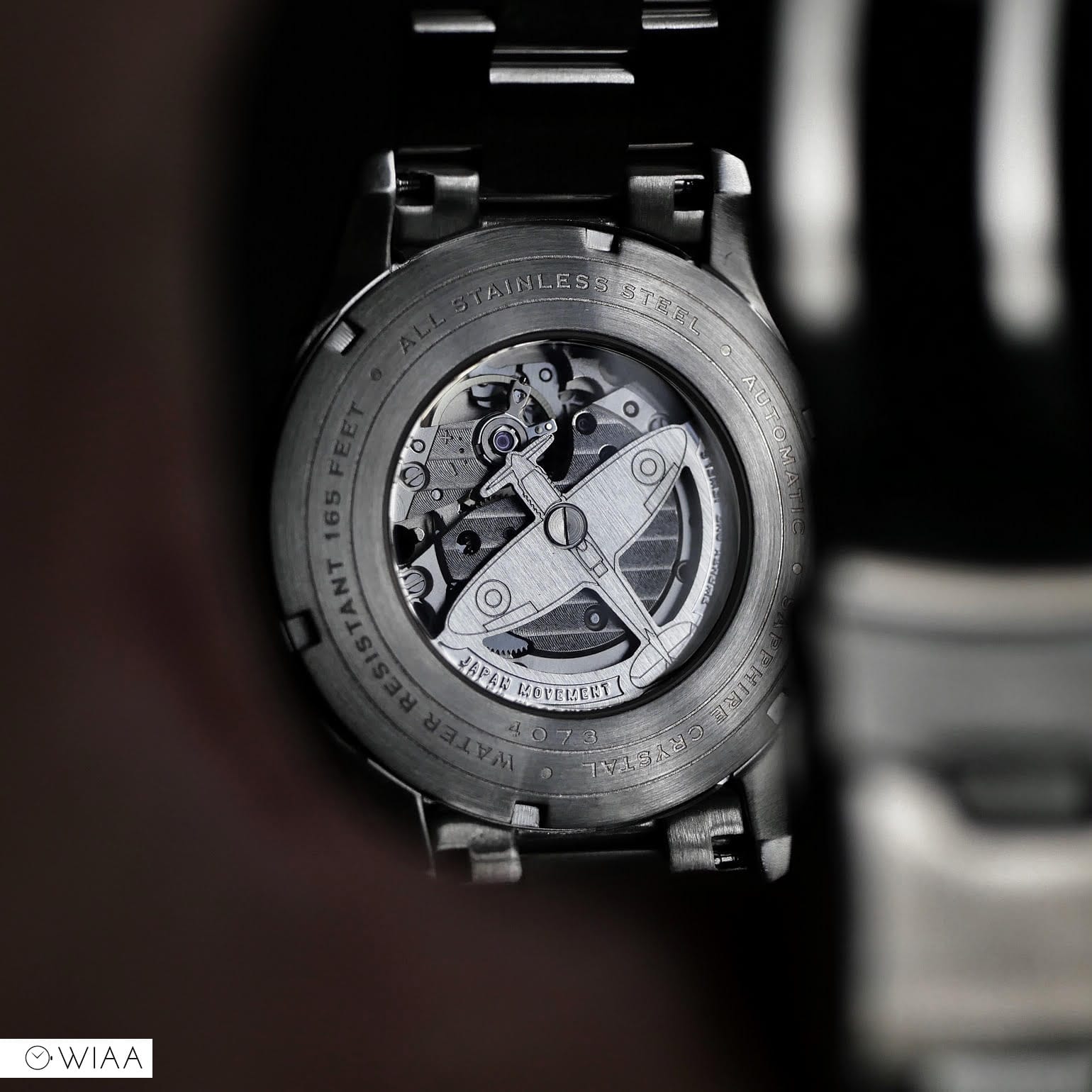 Finally, the Flyboy Engineer, which is probably one of the most simple dials I’ve seen from AVI-8. The dial again is in the green colour, but this one is graduated out to darker tones as you reach the indices. It also has a fine-textured metallic effect like very fine sand which adds to the dial depth. Indices are again applied and run from zero at noon right around the dial with a 3d look, and all finished in yellow. Flyboy appears in text at the six o’clock position as does automatic but finished in red. The hands are a more traditional Flieger style, and again yellow lume filled. At the centre of the dial is a small, simple crosshair pattern and then moving out to just under the indices is the twenty-four-hour scale. This dial on the whole I think is very understated from AVI-8 but also has all their trademark styles and finishes in a simple to read and very traditional overall style. 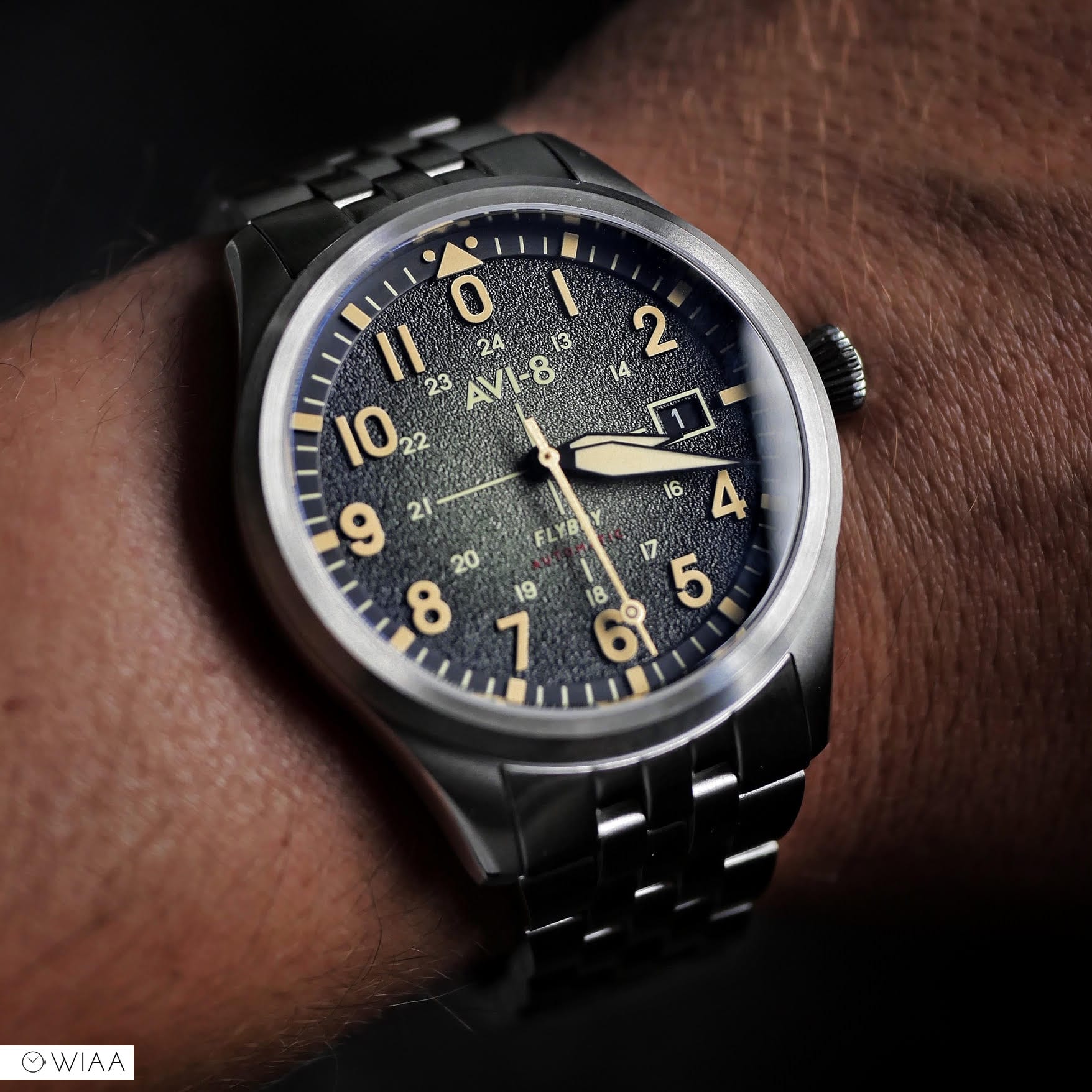 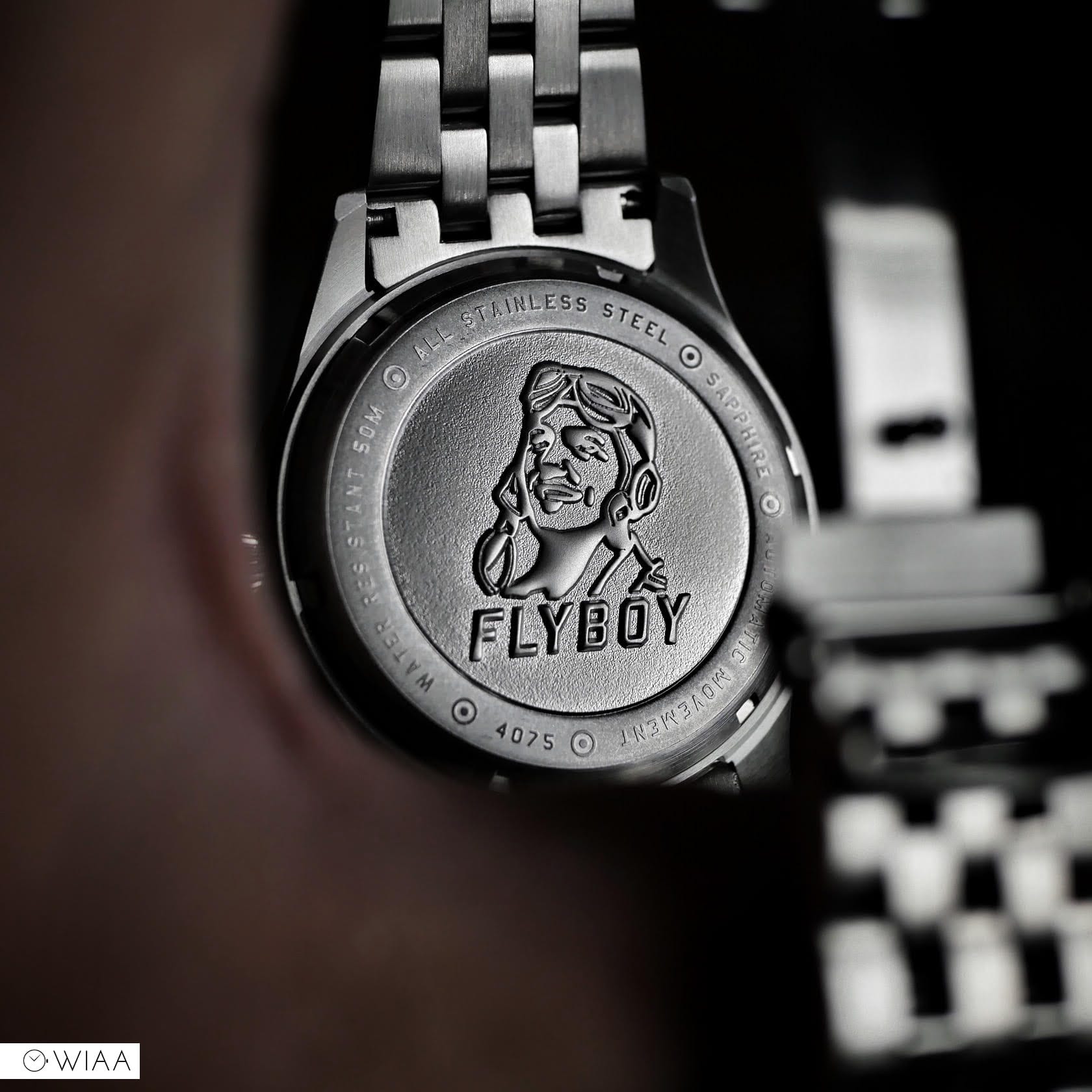 As I said at the beginning, this is more of a look at, instead of a review of these three pieces. To review a watch, I like to spend time wearing it in different situations and get to know it and how it wears and functions over some time. In this instance, I didn’t have that luxury, but what I will say is there was one that I would reach for and would have liked to have spent more time with, and that was the Flyboy. At their heart, all three have the same movement and the NH35 is tested and proven, but from an appearance and aesthetic point of view, the Flyboy was the one that spoke to me the most. It has a more traditional Flieger look but with just enough of the AVI-8 twist to make it enjoyable and stand out from the crowd. Green may not be my first choice, but it’s available in multiple colours, and at 42mm, it’s a nice size for this style of watch. The engraved case back is nicely done, and although I’d probably remove the bracelet and put it on leather or a NATO strap, it’s nice the bracelet is there as an option. All of these watches have exotic dials, and it will come down to personal preference in the end. I’m expecting the Flyboy to be quite the hit for AVI-8 and that’s where my money would go if I had to choose one to keep.

For a full specification list head over to Avi-8 and check these and their other watches out.